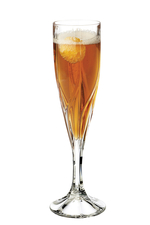 One of the world's most prolific inventors, Walter Hunt is credited with an ice plough, bottle-stoppers, road-sweeping machines, a fountain pen, a repeating rifle, artificial stone, circus equipment and more. On this day in 1849, Hunt picked up a piece of brass wire in his New York City workshop and invented the "Dress-Pin", the little piece of magic we know today as the safety pin.

Hunt sold the patent for $400, not realising how successful it would become. The safety pin, however, wasn't all that he invented. He was the first man to invent a sewing machine, but refused to market it, apparently after his daughter remarked that it would cause unemployment.

Hunt continued to invent, and to sell his inventions, until he died aged 63. An obituary observed that he "had tried more experiments than any other inventor". We're toasting this forgotten genius - and Safety Pin, of course - with a Hunter Cocktail. Or you may prefer a Champino, a delectable champagne Negroni that may have a pin in the name, but it has absolutely no sting in the tail.

It's also the anniversary of the Titanic's maiden voyage

On this day in 1912, the ultimate luxury cruise liner set sail from Southampton, headed for New York on her maiden voyage amid a blaze of publicity.

Many myths have grown up around Titanic. She was never, for example, described as "unsinkable" (the term was qualified by "virtually"); she wasn't competing to be the fastest ship across the Atlantic; and she wasn't, in fact, the biggest boat ever built.

She was, however, the ultimate in luxury, and an icon of the sort of over-reaching ambition and ultimate fall that the Greek tragic playwrights called "hubris", while her wreckage, slowly consumed by metal-eating bacteria, is a site of submarine pilgrimage for the elite.

We are clinking a glass to the Titanic and her victims with a tastefully chosen Ice Maiden.

It's the Anniversary of Arbor Day

Tree planting days are ten a penny around the world today, now everyone appreciates how important trees are to the environment.

Trees absorb carbon dioxide, helping prevent global warming, reduce soil erosion, and soak up water that could otherwise cause catastrophic flooding. In 1594, however, when none of this was known, the idea of planting trees to protect the environment was forward-thinking indeed. This is when the world's first documented arbor plantation festival was organized by the mayor of Mondoñedo, a small town in the Galician province of Lugo, Spain.

But in it is a US politician from Nebraska who we really have to thank for promoting and establishing this concept - on this day in 1872 Julius Sterling Morton persuaded Americans to plant as many as a million trees on the first ever Arbor Day.

Arbor Day dates vary around the world according to tree-planting seasons and here in the UK that season has just passed and the trees are already in blossom. However, we'll still going to plant a sapling to mark the occasion. As for what cocktail to toast Mr Morton, both the Pear Tree Cocktail and the Fruit Tree Daiquiri seem appropriate.