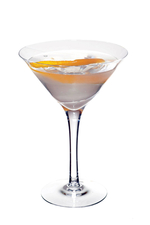 On this day in 1969, half a million hippies rolled up to a farm in upstate New York for the world's most famous one off music festival, Woodstock. Billed as being "an Aquarian exposition: 3 days of peace and music". Artists including The Who, Janis Joplin, Joan Baez, Sly & the Family Stone, Jimi Hendrix and the Grateful Dead all performed for a bead-wearing crowd.

Weed and acid flowed - there was even a dedicated "bad trip tent" - as did free love and nudity on a level that makes today's festivals look, frankly, extremely tame.

Yet, the original hippies and their flower power ideology were an incredible force for social change. We're toasting them with one of our own creations, the suitably floral Flower Power Martini.

On the 14th August 1945, US President Harry S Truman announced that the Japanese Government had unconditionally surrendered to the Allies, complying in full with the Potsdam declaration, so ending the Second World War. At what was midnight in the UK, British Prime Minister Clement Atlee confirmed the news, saying, "The last of our enemies is laid low."

The Allies celebrated victory over Japan on 15th August 1945, although the Japanese did not officially sign the surrender document until 2nd September. Both dates are known as VJ Day.

The 15th August 1945 coincided with the state opening of the British Parliament, always a ceremonial occasion, but that year more a victory parade. People crowded onto the streets and partied. Meanwhile, in Japan, there were no celebrations as the country reeled from the use of "a new and most cruel bomb" that devastated Hiroshima and Nagasaki so forcing the country's surrender.

We are marking VJ day by thinking of our friends in Japan - the country that has bought us delectable whisky, sake, beautiful bar tools, and even the hard shake - with a cocktail by one of our friends in America, Damian Windor's Japanese Maple. As we sip we'll be contemplating how good it is to have friends rather than enemies.

... comment(s) for Anniversary of Woodstock