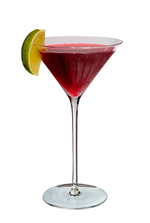 Tonight in 1877 Tchaikovsky's Swan Lake premiered at the Bolshoi Theatre in Moscow. The story was fashioned from Russian folk stories and tells the tale of Odette, a princess turned into a swan by an evil sorcerer's curse.

The ballet many of us see nowadays, however, is based both choreographically and musically on the 1895 revival, although there have been many modern interpretations since, most notably Matthew Bourne's which sees men take the traditional female roles.

In thanks for this beautiful ballet we're toasting Tchaikovsky with a Ballet Russe.

It's the day that Mountbatten became Viceroy in India

Yesterday, we (naughtily) used the first broadcast of Eastenders as an excuse to drink an Eastern Sin...but today, we have a real reason to be drinking an Eastern-themed drink - this one is an Indian Sunset, which contains the loveliest of Indian spices: cardamom.

The reason we're mixing one today is that Mountbatten became the Indian Viceroy on this day back in 1947 - he was, in fact, the 24th and the last Viceroy of India. Mountbatten was a controversial historical figure who oversaw the creation of the independent states of India and Pakistan - so you could say that he didn't do the best job...but in his defence, it wasn't the easiest line to draw.

Still, Mountbatten was a key figure in the dying British Empire. Aged 79, he came to a tragic end when his boat was blown up by the IRA on a family fishing holiday. Let's raise a glass to the Viceroy, and toast a bygone era.

It's also the anniversary of The Great White Concert Disaster

This day in 2003, the Station nightclub in Rhode Island, New Jersey, was host to the fourth-worst nightclub disaster in the history of the nation, after fireworks set off by the band Great White set the place ablaze.

It took two minutes for the place to be black with smoke, and five and a half minutes for flames to engulf the venue, killing 100 people and injuring more than 230 - only 132 people escaped injury.

At first, understandably for a glam rock act, most of the audience thought the flames licking the ceiling were part of the show. When it became clear they weren't, a stampede for the front door turned into a crush. The whole thing, horribly, was caught on film by a reporter filming a piece on nightclub safety in response to another recent club fire.

We are raising a glass in memory of those who died in quest of fun - our choice is Harry Craddock's 1930 The Savoy Cocktail Book. find, the White Cargo.

It's the anniversary of The Smiths' first album

Way, way back in 1984, a little known band named The Smiths released their first album, the imaginatively titled The Smiths. With cheery numbers like Miserable Lie, Pretty Girls Make Graves and This Charming Man, both Morrissey and The Smiths had arrived.

Perhaps more famous now for his opinions than his vocals - Morrissey famously blamed Beyoncé, or, more specifically, her handbags, for the rhino's near-extinction - he is now an elder statesman of the British music scene. Other victims include David and Victoria Beckham, who should be "dragged to the edge of the village and flogged", as well as the sainted Duchess of Cambridge - Morrissey had his band wear "We Hate William and Kate" T-shirts on stage.

The Smiths split in 1987 and fought over royalties for a further 15-odd years: although they're still a hipster favourite, and despite rumours, there's little chance the band will reunite. We're toasting their music with a Little Smith, an appley concoction we discovered in Ubar, Copenhagen.