Dress Up Your Pet Day 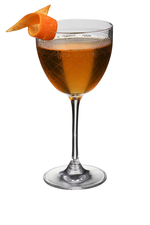 Today is a day the internet was almost certainly invented for (sorry, Tim Berners-Lee): National Dress Up Your Pet Day.

But - a word of caution before you reach for the Bedazzler and start spangling your pussy - animal cruelty is neither big nor clever. Or, as founder and "Celebrity Pet Lifestyle Expert and Animal Behaviorist" (these are both things, people! - real things!) Colleen Paige explains, "Today is not a day to disrespect our pets with uncomfortable, vulgar and/or seasonally inappropriate costumes for the sake of a laugh". Perish the thought!

So in honour of every little old lady with a tartan-clad Scottie, every Beverly Hills princess with a Barbie-styled shihtzu, and every Chinese couple with a pyjama-clad Peke, we are drinking a Golden Retriever, an eminently palatable creation from the great Dick Bradsell, who also created the Pink Chihuahua.

It's the day Humphrey Bogart died

It is as hard to imagine Humphrey Bogart playing a romantic lead today as it is to imagine the man setting foot in a gym or indulging in Botox. He wore his wrinkles as proudly as he wore the scar on his upper lip, most likely acquired in a punch-up in a speakeasy. But in his day Bogey was one of the biggest stars around, with a lifestyle to match his world-weary drawl and casually raised eyebrows.

After two more or less disastrous marriages, he found happiness with Lauren Bacall, herself no slouch in the party stakes, and became a central figure of the Rat Pack. Bogey liked to start drinking at noon, enjoying Scotch, martinis, Jack Rose cocktails and the occasional Black Velvet. Small wonder that he once observed: "The problem with the world is that everyone's three drinks behind."

Bogey died, this day in 1957 (aged 57), of a drinker's ailment, cancer of the oesophagus. His famous last words - "I should never have switched from Scotch to Martinis" - are most likely apocryphal. But we think he would have approved of the Black Nail.

It's Norman Keith Collins (1911-1973) birthday - better known as Sailor Jerry - the man who lent his name to the famous rum brand.

The old Sea Dog was known for being one of the most talented tattoo artists who ever lived, with the filthiest mouth and mucky inkings covering his body.

When he wasn't tattooing, Sailor Jerry was at sea - in fact, he was often tattooing and at sea simultaneously, getting the reputation of a "class-A pirate." A big part of the Sailor Jerry legacy has been the spiced Navy rum that bears his name, so we thought that we'd give you a reason to crack open a bottle of spiced rum by recommending a Spiced Pear to celebrate the legend.

... comment(s) for Dress Up Your Pet Day