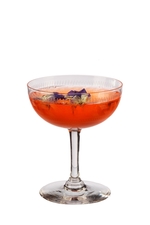 This 1950s sex symbol was raised in Los Angeles, spending much of her childhood in foster homes and an orphanage before marrying at just 16. Her big break came in 1944, while working in a factory, when an introduction to a photographer led to a modelling career. Later as a film star, the fact she had posed for nude photos caused a scandal that increased her box office draw and stardom.

Her short-lived film career included numerous roles in major films that together grossed some $200 million, most notably: Gentlemen Prefer Blondes, How to Marry a Millionaire, The Seven Year Itch, Bus Stop and Some Like It Hot.

She battled against being typecast as a "dumb blonde", and struggled with substance abuse, depression, and anxiety. Her two marriages ended in divorce and on 5th August 1962, she died tragically at just 36 from an overdose of barbiturates - a probable suicide this is challenged by conspiracy theories.

We're drinking to this ambitious and driven Golden Globe-winning actress with our interpretation of the Showgirl Cocktail, served at the Beaufort Bar, The Savoy Hotel, London.

Henry Heimlich, a chest surgeon, had been looking for a cure for the "Cafe Coronary". This was a phenomenon where middle-aged and older men enjoying a boozy lunch collapsed with what looked like a heart attack. Only on autopsy would doctors find they'd actually choked to death.

Heimlich figured there had to be enough air in the lungs to force an object out of the windpipe. So, he doped up a beagle to imitate a human being during a three-Martini lunch (yes, seriously), shoved things down its windpipe, pumped its diaphragm and found the manoeuvre worked.

We are toasting the Manoeuvre with a Negroni Tredici. Easily good enough for a three-martini lunch, it includes a hearty choke, in the form of Cynar artichoke amaro. (Yes, yes, we know. We're sorry.)

The Paris Ritz opened this day

César Ritz and August Escoffier opened the doors of the Paris Ritz, ancestor to the London Ritz, on the Place Vendôme, to a glittering reception on this day in 1898, and since then the various bars have played host to many celebrated bartenders.

For a long time, it was home to Coco Chanel, as well as Ernest Hemingway who, along with a bunch of marines, famously "liberated" it from the Luftwaffe, who had used it as their headquarters during World War II. The Paris Ritz remains a place of pilgrimage for barflies as its various bars have played host to celebrated bartenders from Frank Meier to the current incumbent of Ritz's Bar Hemingway, Colin Field.

We are toasting the Ritz with a truly ritzy champagne cocktail. For, while the Buck's Fizz belongs to London (and the Buck's Club), the Mimosa seems to have originated at the Paris Ritz in 1925. Today's Mimosas come in a frankly bewildering range of flavours, but we like ours the traditional way, or with a splash of orange liqueur in a Grand Mimosa.

If you've seen Gone with the Wind, you'll know Leslie Howard - the British star who played the object of Scarlett O'Hara's obsession. He was one of the biggest movie stars of the 1930s.

He died this day in 1943 when his civilian plane was shot down just off Portugal by German fighters. Why? Theories still abound. The Nazi propaganda minister, Josef Goebbels, considered Howard, who had starred in, directed and produced a series of British morale-boosting films, "the most dangerous propagandist in British service".

But one of Howard's ex-girlfriends claimed before she died that Howard had actually been on a secret mission to persuade the Spanish dictator Franco to stay out of the war, and was targeted for that.

Like all the best mysteries, there is no clear answer - the German pilots denied they ever received orders to target him. But in honour of a man with an impressive career, we are marking today with The Star, an appropriately named Manhattan-like cocktail with befitting American and European influences.