Aspirin was discovered on this day 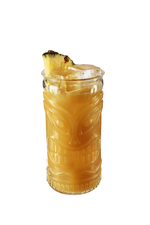 Headaches are, we're sad to say, an occupational hazard for the dedicated cocktail lover. So praise the lord for Felix Hoffmann, a genius pharmacist who in one super-productive month invented not only aspirin but whoops - heroin, too. Bayer AG, Hoffmann's employer, registered the more savoury of his two creations with Berlin's patent office on this day in 1899.

Hoffman's discovery began with willow bark, which Europeans had used as a painkiller for more than 2000 years - but the active ingredient, salicylic acid, was hard both to extract and preserve. When Hoffman managed not only to synthesise it but to keep it stable, the soluble powder he produced was, pretty much, an overnight success. Aspirin would be the only anti-inflammatory drug in the world for almost half a century.

Following Germany's surrender after World War I, as part of war reparations, Aspirin, and indeed heroin, lost their registered trademark status in France, Russia, United Kingdom and the United States, but Bayer AG retains the trademark in Germany.

Today Aspirin is still the world's most popular painkiller, and a routine treatment for both heart disease and (in emergencies) heart attacks. In honour of its discovery, we are drinking a Painkiller, an anaesthetising rum concoction from the British Virgin Islands.

It's also the Dude's birthday

This day in 1998, The Coe Brothers' cult classic, The Big Lebowski was released in North America. The film follows 'The Dude' - a pot-smoking, White Russian quaffing, Californian. A not-so-classic tale of mistaken identity mixes kidnap with nihilism, bowling and a severed toe.

The Dude was supposedly based on a film producer called Jeff Dowd, who spent a brief spell in jail following a Vietnam War protest. Aside from being addressed as 'The Dude,' Dowd also had a penchant for White Russians.

Weirdly, an online religion was founded in 2005 called 'Dudeism' - it also goes by the name 'The Church of the Latter-Day Dude.' Absurd though it may sound, the organisation has ordained over 400,000 Dudeist Priests around the world. Apparently, the religion is devoted to spreading the philosophy and lifestyle of the film's main character. If you're interested in trying it out, then why not start by mixing a White Russian tonight, and re-watching the Big Lebowski for some inspiration!

Knight of Antigua, founder of Twenty20 cricket, power player, financier and all-round good egg? This day in 2012 he was convicted of running one of the biggest Ponzi schemes of all time, taking in more than $7bn in deposits, claiming they were in safe investments, losing the money in risky ones, and using new deposits to pay his old "investors" back.

But, boy did Sir Allen have fun spending it. He maintained a castle in Florida, a yacht off the coast of Antigua, a $100 million fleet of private jets, his own private terminal at Antigua airport, not to mention one wife, a stable of four "outside wives" and the odd girlfriend or two, including the 33-year-old cocktail waitress at whose home he was arrested. Remembering, "crime doesn't pay" we're drinking a Stanley cocktail.

... comment(s) for Aspirin was discovered on this day