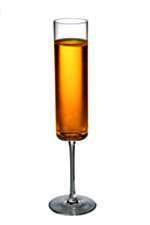 On this very day back in 1889, the Eiffel Tower was inaugurated (it was opened on 6 May). It was then the tallest building in the world ... until the Chrysler Building stole its title in 1930. Though at 108 stories high, it isn't to be sniffed at!

The Eiffel Tower was built as an entrance arch for the World Fair which was being held in Paris to mark the centennial celebration of the French Revolution. At the time, there was outrage at the tower - Parisians said it was an eyesore, and ruined the skyline. It's now considered to be the most iconic structure in France, attracting well over 6 million visitors each year.

Mix up La Tour Eiffel this evening and have a drink for the tower and its architect - Gustave Eiffel.

It's also the day the Titanic was finished

100 years ago today, workmen in Belfast finished fitting out the largest and most luxurious ocean liner in the world, the Titanic, which was considered to be "virtually unsinkable" due to its innovative watertight compartments.

Her lavish interiors included a gym, a magnificent double staircase, and restaurants, bars and smoking rooms. First class passengers would enjoy indulgent ten-course dinners, complete with cocktails, and bars stocked with an impressive range of booze.

The best suites had bedrooms, sitting rooms and servants' room, and featured bathrooms with both baths and showers. By contrast, several hundred third class passengers were expected to share each bathroom. We are commemorating this beautiful cruise ship, still a byword for tragedy and decadence, with an appropriately named cocktail, the Ice Maiden.

It's also the anniversary of the day Niagara Falls stopped falling

Around midnight last night, back in 1848, an American farmer went for a walk, and noticed something odd: the steady roar of the Niagara Falls, which had punctuated his days and nights, was no longer there. He went to the river. It was almost empty. And the next day the falls had ceased to flow. Panic blossomed. Fish died, turtles floundered and, while some folk strolled the dried-up river bed, beach-combing, others went to church to pray for salvation.

Was it the End Times? Clearly not. Lake ice had collected at the edge of Lake Eyrie, forming an ice dam that meant water couldn't flow, so for two whole days the falls were silent. Then a rumble was heard, growing louder and louder, and a wall of water came surging down the Niagara River and over the falls. They would not stop again until Army Engineers diverted them briefly in 1969.

We are celebrating the Niagara Falls, then as now one of the world's great tourist attractions, with a Niagara Falls Cocktail, an easy-drinking little number with plenty of orange and ginger.

It's also The Matrix's birthday

You take the blue pill - the story ends, you wake up in your bed and believe whatever you want to believe. You take the red pill - you stay in Wonderland and I show you how deep the rabbit-hole goes.

On this day in 1999, the Wachowski siblings (Larry, now Lana, and Andy), released The Matrix, a movie that would spawn a million stoned discussions, thousands of fancy dress outfits and any number of failed attempts to recreate that Morpheus hand gesture.

A brilliant combo of big philosophical questions - is the world we are living in real? Is the mind in the body or somewhere else? Can we know what is real? Do we have free will? - with slo-mo action sequences, stellar effects and great outfits, The Matrix has aged well.

Rather than jacking in tonight, however, we're jacking out, with a Jack-in-the-Box cocktail, a classic cocktail based on Calvados.