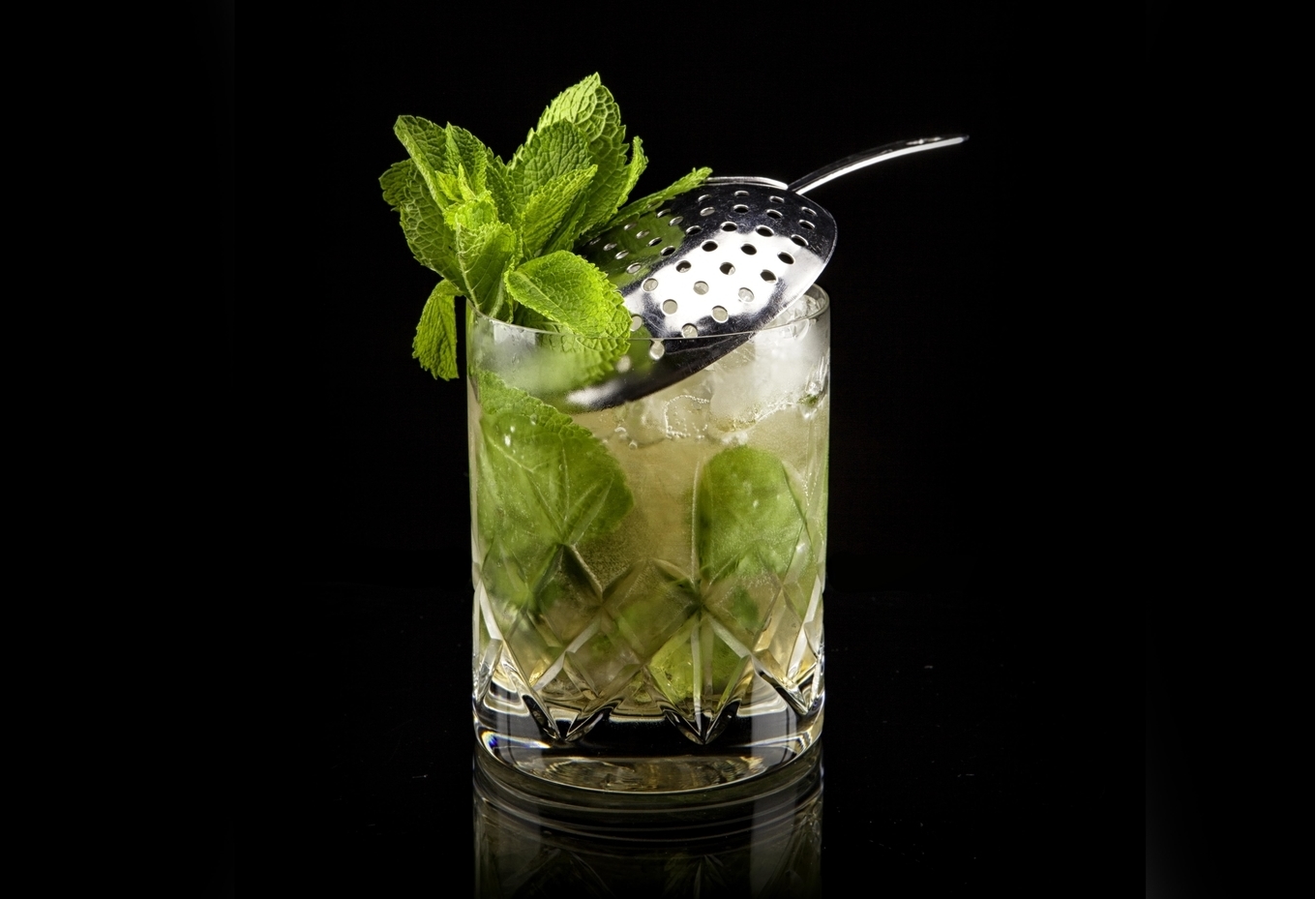 Juleps are tall drinks served over crushed ice and based on a spirit, liqueur, wine or fortified wine. They are most often served with fresh mint in julep cups (or Collins glasses if tins are not available). The bourbon or rye whisky based Mint Julep is by far the best known of its genre.

Tips on how to make

When making a Mint Julep it is important to only bruise the mint as crushing the leaves releases the bitter, inner juices. If shaking as your mixing method (which we controversially recommend), then no bruising is required prior to shaking due to the action of the ice. Also, be sure to discard the stems, which may add bitterness.

It is imperative that the drink is served ice-cold so both the julep cup and the ingredients should be stored in a refrigerator prior to use and consider freezing your whiskey or other base spirit.

Some like to combine the ingredients in the julep cup in which the drink is served. We favour shaking and then straining the mixed drink into an ice-filled julep cup. Some proponents of shaking recommend combining the mint and other ingredients in the shaker and placing this, along with the serving vessel (preferably made of metal rather than glass) in a refrigerator for at least 30 minutes prior to adding ice, shaking and serving. The idea being that this ensures well-chilled while also allowing the mint to fully infuse. If you are organised enough to prep this far ahead of drinking, then I recommend fishing out the mint leaves prior to shaking. 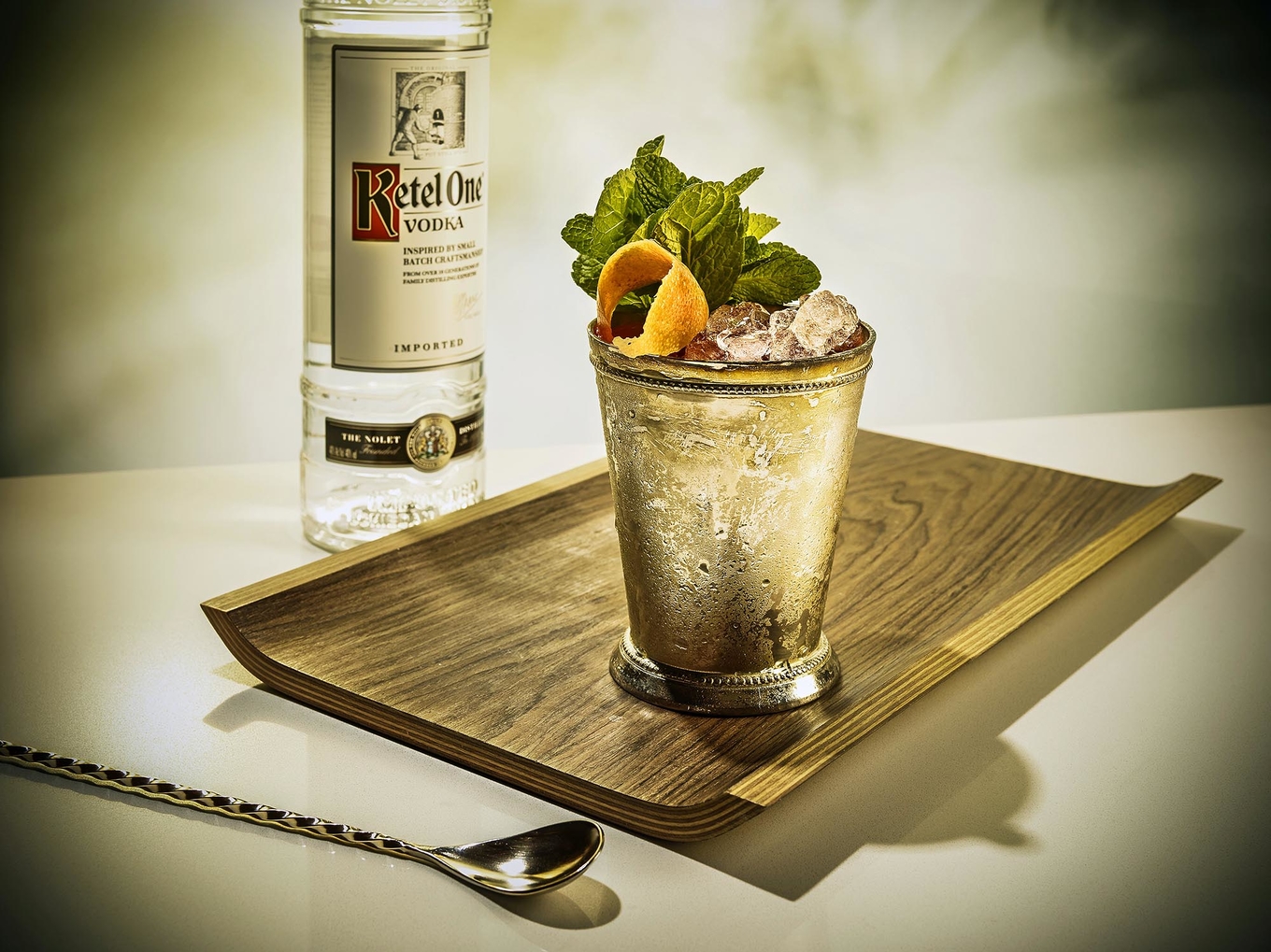 Silver drinking cups were popular throughout the southern states of the USA, long before the julep. They symbolised achievement and were used at christenings, weddings and as prizes for competition winners, and indeed horse races. They were simple silver tumblers or beakers rather than julep cups.

Early Julep Cups are most associated with two silversmiths Asa Blanchard (1787-1838) of Lexington, Kentucky and brothers William and Archibald Cooper of Louisville. Asa Blanchard famously produced his Coin Silver Barrel Beaker which was shaped like the barrels in which bourbon is aged. As fashions changed, he went on to produce the familiar cups with smoothly tapered sides. It is this design that prevailed, some with a beaded rim and others with bands at the top.

The other silversmiths most identified with early julep cups are John Kitts and William Kendrick (whose business was continued by his sons and survives to this day as Merkley Kendrick Jewelers, "the oldest independent jeweller in Louisville and the second oldest in America").

Variations on the Mint Julep include substituting the bourbon for rye whiskey, rum, gin, brandy, calvados or applejack brandy. 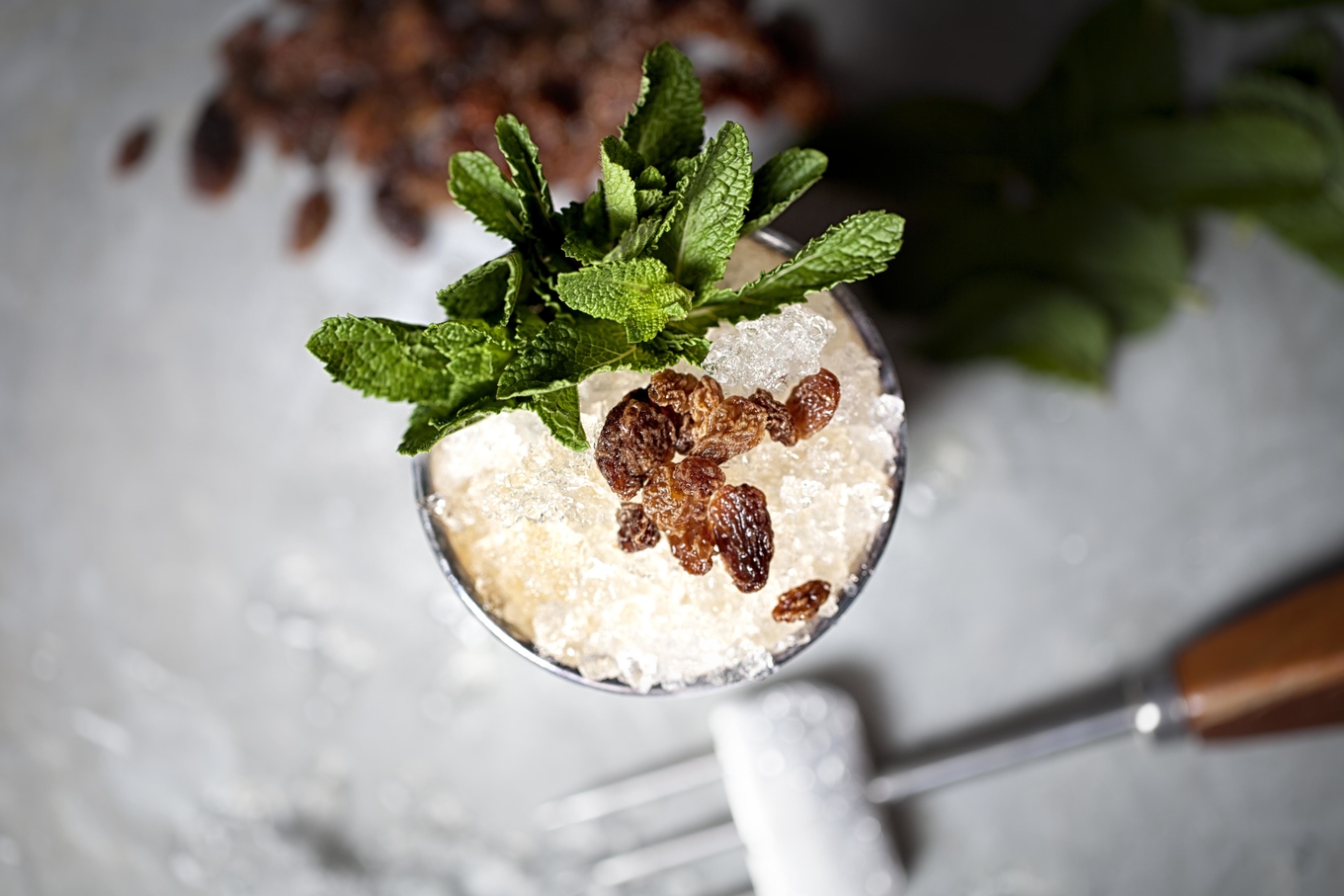 Like so many cocktails, the humble Mint Julep's origins are the subject of heated debate. Today it is closely identified with America's Deep South, but its origins and indeed its name date back to well before America was settled.

The name julep derives from gulab from the Persian words gol (flower) and āb (water), referring to a rosewater-scented syrup. Incidentally, this is also where Gulab jamun, the dessert served in Indian restaurants flavoured with a cardamom and rose syrup also takes its name.

In Arabic, the word for rosewater became julab and in Latin as julapium. And as the quest for health-giving elixirs occupied monks across medieval Europe, so variants of the word were used for medicinal syrups infused with flowers and herbs.

Commonly perceived wisdom has it that the Julep originated in Persia, or thereabouts, and it travelled to Europe (some say Southern France) where the rose petals were substituted for indigenous mint. The drink is then believed to have crossed the Atlantic where cognac was replaced with peach brandy and then whiskey to make the Mint Julep we recognise today.

The first known written reference to a Julep is in a 1634 masque (court poem) written by John Milton and first performed in 1634, before John Egerton, 1st Earl of Bridgewater, at Ludlow Castle, England. Known as Comus the salient passage is as follows:

"That flames and dances in his crystal bounds,
With spirits of balm and fragrant syrups mixed.
Not that Nepenthes which the wife of Thone
In Egypt gave to Jove-born Helena
Is of such power to stir up joy as this,
To life so friendly, or so cool to thirst." 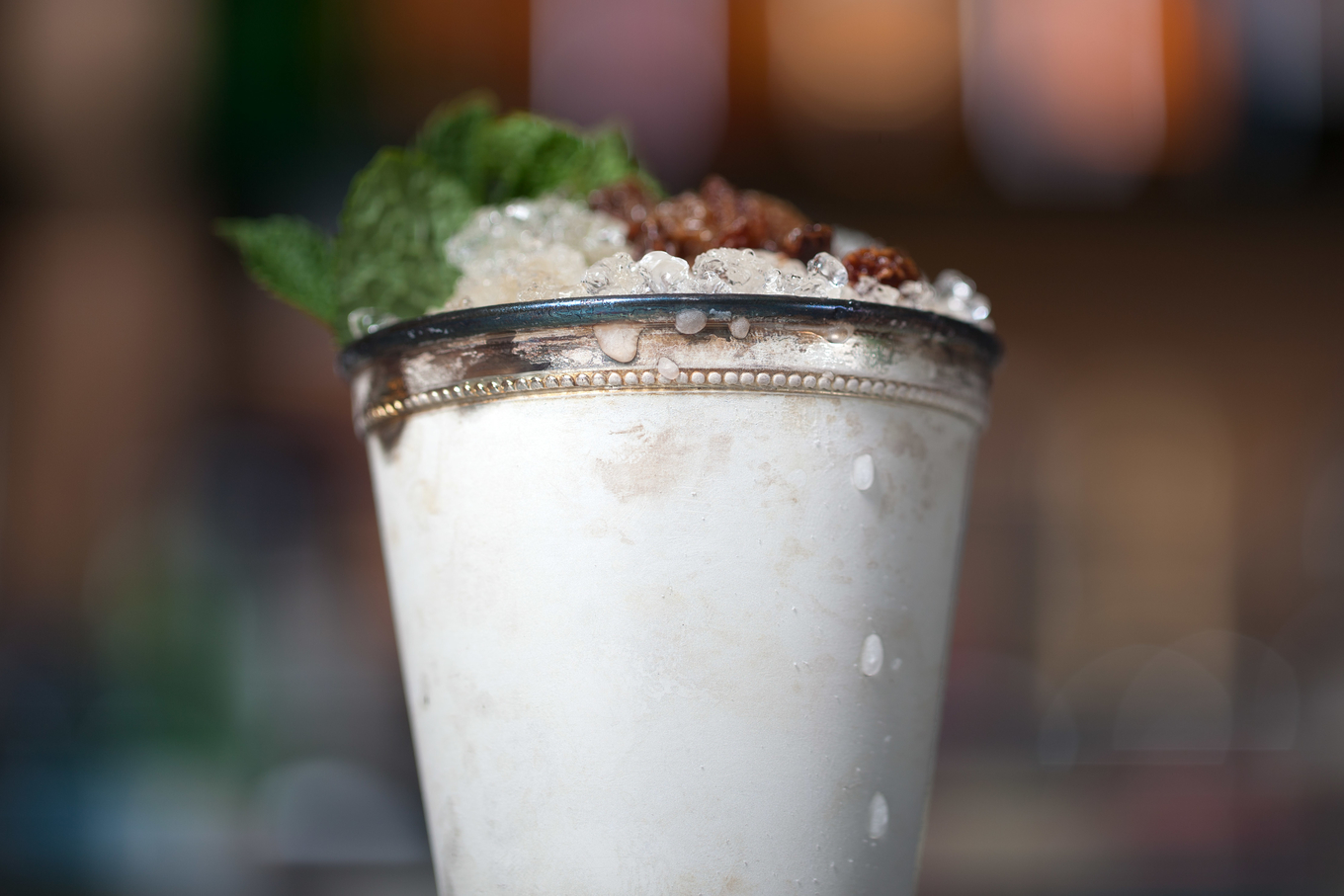 Previously, I've been guilty of repeating other reports that the first written reference to a Julep cocktail was in 1787 while others say 1774. However, the first written reference that I have been able to attribute appears in John Davis' 1803 book Travels in the United States, where he wrote "The first thing he did on getting out of bed was to call for a Julep* and I honestly date my own love of whiskey, from mixing and tasting my young "master's Juleps." Handily, Davis added the following footnote explaining what a Julep is, "* A dram of spirituous liquor that has mint steeped in it, taken by Virginians of a morning."

At that time, it could be made with rum, brandy or whiskey, but by 1900 whiskey had become the preferred base spirit. Indeed, in his 1862 The Bartender's Guide, Jerry Thomas's Mint Julep calls for cognac and a dash of Jamaican rum. He also lists a Julep variation made with gin and one calling for ripe pineapple as well as the now-ubiquitous whiskey version.

According to Jerry Thomas, the Mint Julep reached Britain in 1839, thanks to the novelist Captain Frederick Marryat who praised the drink in volume I of his Diary in America.

"I must, however, descant a little upon the mint-julep, as it is, with the thermometer at 100°, one of the most delightful and insinuating potations that ever was invented, and may be drank with equal satisfaction when the thermometer is as low as 70°. There are many varieties, such as those composed of Claret, Madeira, &c. but the ingredients of the real mint-julep are as follows. I learnt how to make them, and succeeded pretty well. Put into a tumbler about a dozen sprigs of the tender shoots of mint, upon them put a spoonful of white sugar, and equal proportions of peach and common brandy, so as to fill it up onethird, or perhaps a little less. Then take rasped or pounded ice, and fill up the tumbler. Epicures rub the lips of the tumbler with a piece of fresh pine-apple, and the tumbler itself is very often incrusted outside with stalactites of ice. As the ice melts, you drink. I once overheard two ladies talking in the next room to me, and one of them said, "Well, if I have a weakness for any one thing, it is for a mint-julep-" a very amiable weakness, and proving her good sense and good taste. They are, in fact, like the American ladies, irresistible." 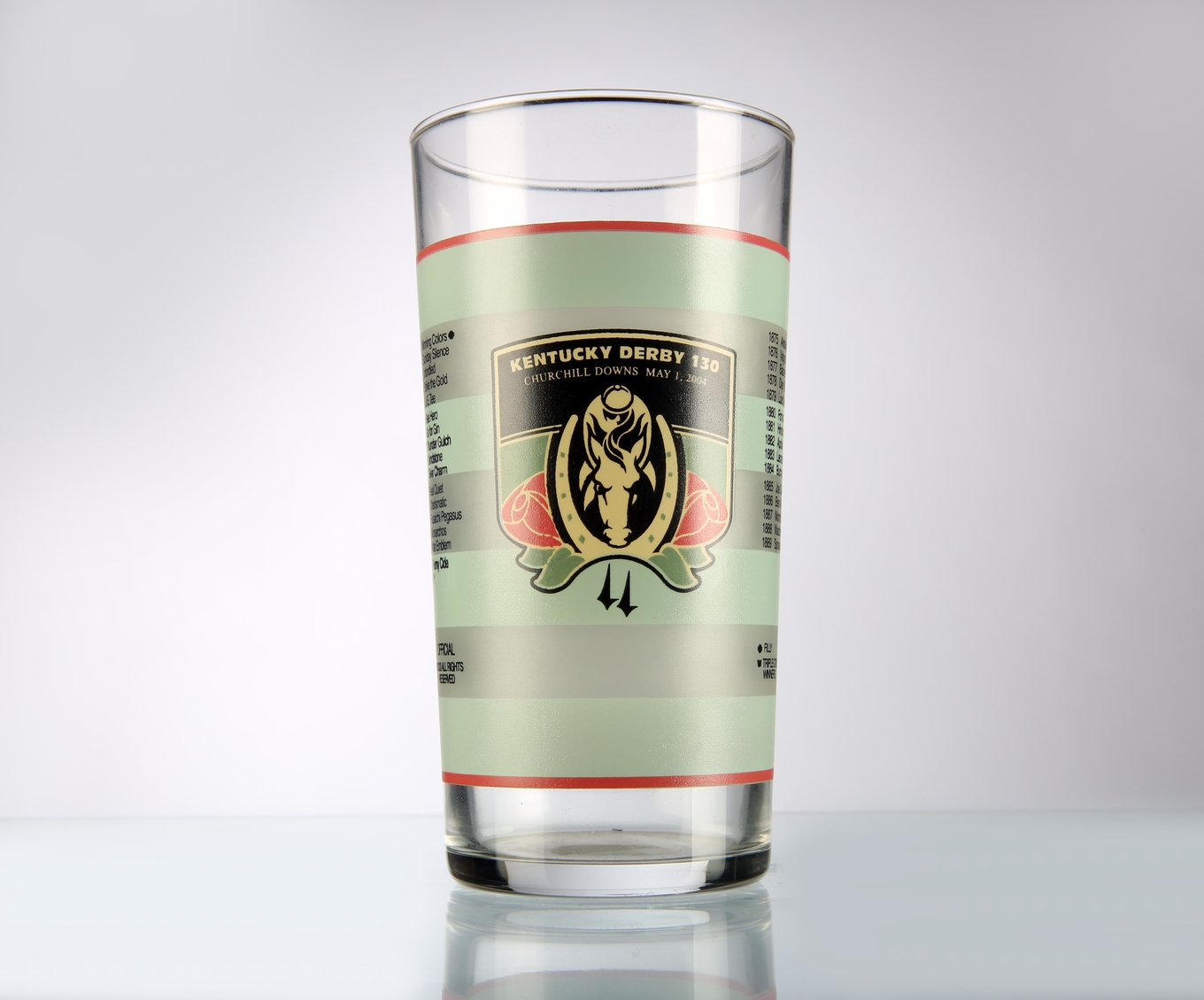 The bourbon-based Mint Julep is inextricably linked to the Kentucky Derby, a horse race held annually on the first Saturday in May at Churchill Downs Louisville, Kentucky, USA. It's a huge event, attracting more spectators than any other horserace and traditionally, as well as dressing up, attendees enjoy Mint Juleps.

The race, over one-and-a-quarter miles, has been run every consecutive year since 1875 and is a Grade I Stakes for three-year-old Thoroughbreds. It's often called The Run for the Roses due to the blanket of 554 roses draped over the winner, and The Fastest Two Minutes in Sports referencing its approximate duration.

The Kentucky Derby caps the two-week-long Kentucky Derby Festival which licks off with Thunder Over Louisville, the largest annual fireworks display in North America. The Derby, run on the first Saturday in May, follows Friday's Kentucky Oaks for fillies and over these two days Churchill Downs estimates it sells some 120,000 Mint Juleps which are served in souvenir glasses.

The Mint Julep became the official beverage of the Kentucky Derby in 1938 when they started serving juleps in tall glasses rather than paper cups. Due to so many people stealing the glasses, the following year (1939) the track commissioned Libbey Glass Company of Toledo, Ohio to produce the first souvenir glasses and ever since a different commemorative glass has been produced, each printed with the names of all the previous Derby winners. 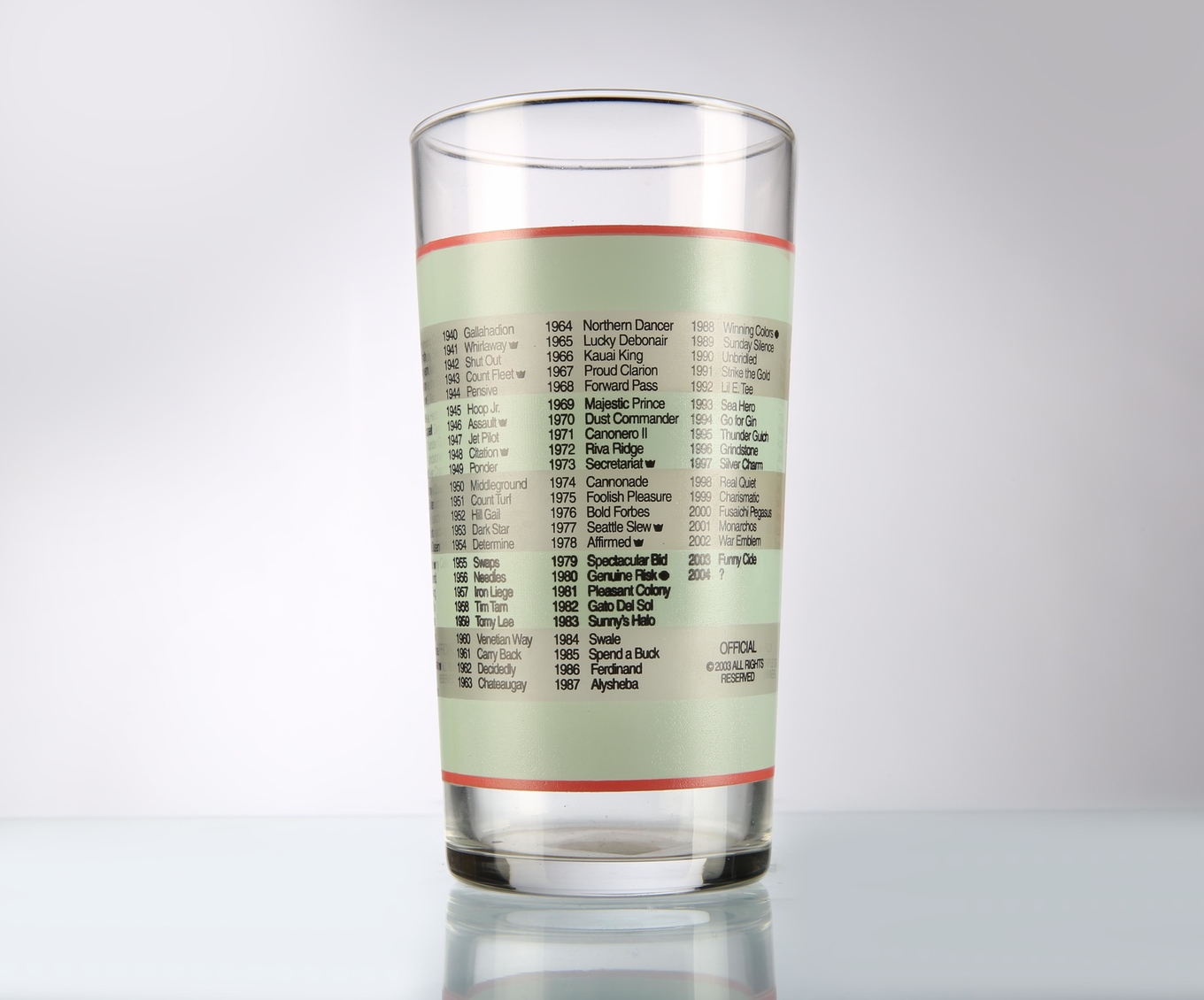