Photography by courtesy of Top Shelf 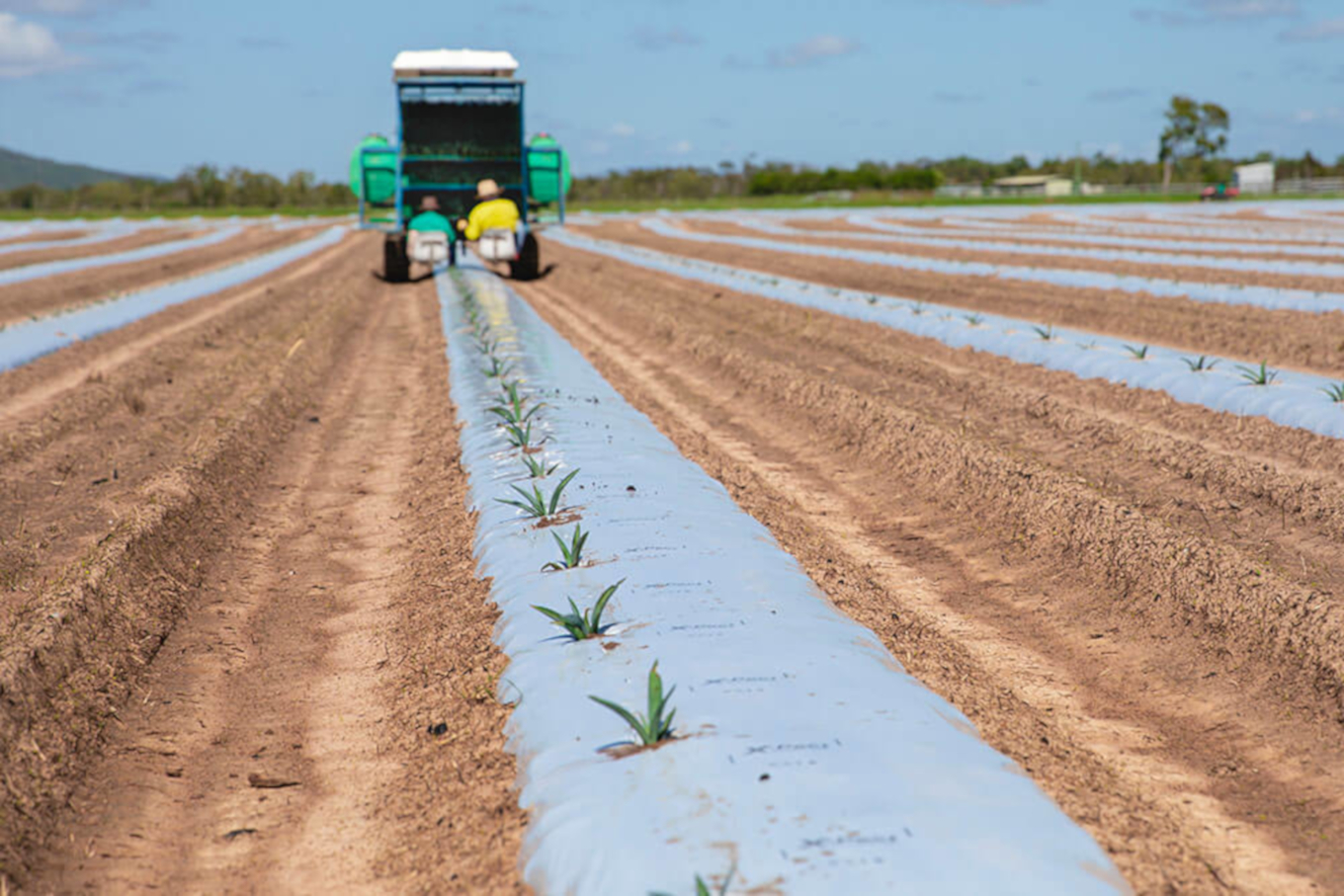 With 450,000 plants in the ground in Queensland, a team of researchers and experts based from Adelaide to Melbourne and on the ground at the Eden Lassie farm, and a brand name imminent, it's safe to say Australia is about to release its first accessible spirit made from locally grown blue agave plants.

"Sparkling wine from the Yarra Valley has never hurt Champagne."

That's a quote from Sebastian Reaburn, the master distiller for Top Shelf Group (Ned Whisky, Grainshaker Vodka) and the man tasked with bringing an Australian agave spirit to the masses. It's an important starting point for this article and the whole project of growing, harvesting, fermenting, and distilling agave in Australia. This isn't an attack on Tequila. Tequila will be just fine. Tequila probably won't even notice some Australians are tinkering around with agave some 12,700 kilometres (and 15 hours in the future) away. 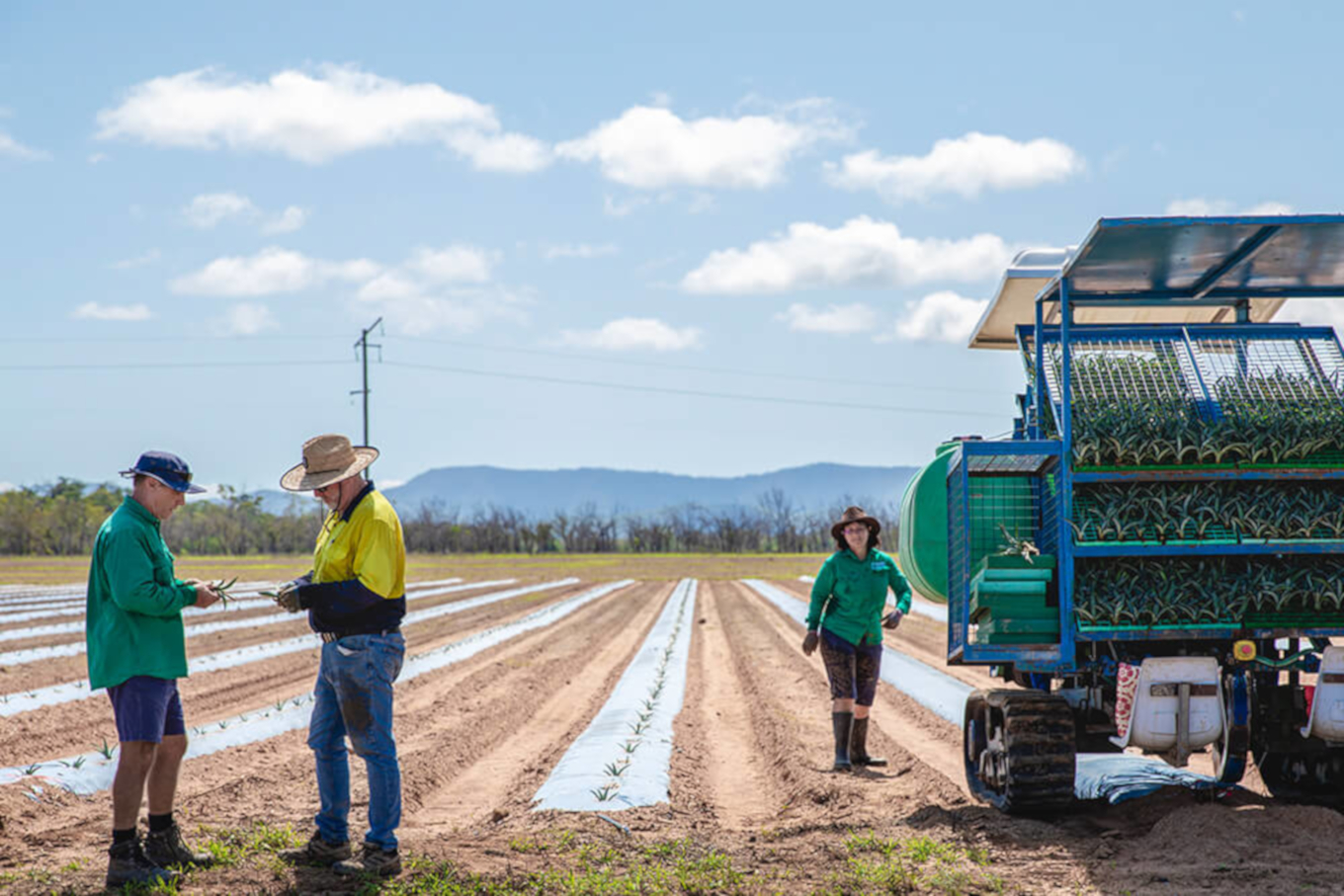 Where'd they get all that Blue Agave?

Blue agave isn't something you can readily get your hands on. Aside from the global agave shortage, even if someone in Mexico agreed to sell you some plants, there's no guarantee you'd be able to get it into Australia. After all, you're not allowed to take a banana from NSW to QLD on a flight.

Instead, the team at Top Shelf essentially got lucky. Or as Sebastian says "it was a few different things that all converged, but there's also a little bit of, if you're looking, you'll find."

Top Shelf has a very vocal stance on making Australian spirits at a democratic price point. Couple that with their chairman, Adem Karafili, who knew from a previous job just how much passion and knowledge there was for agave spirits, and, really, the agave found them.

"We were contacted by a company called AusAgave and they had, for many years, worked with different universities, government bodies and the sugarcane industry to explore agave for biomass. Some of these projects, started 10 years ago, had not progressed and the agave was sitting there needing to be removed."

These research projects were started under an old Australian government with a more sustainable approach towards energy. Many of them were lost in the political switch. What that meant was parcels of land full of mature blue agaves to be experimented with, agaves that were old enough to have flowered and therefore have both bulbils – the reproduction from flowering – and also pups.

"What that gave us was Australian acclimated blue agave that we could then plant out."

Adem and the Top Shelf team knew immediately the scope of this opportunity, and luckily they had the audacity to act fast. The timeline between the contact from AusAgave and their first harvest was about three months. 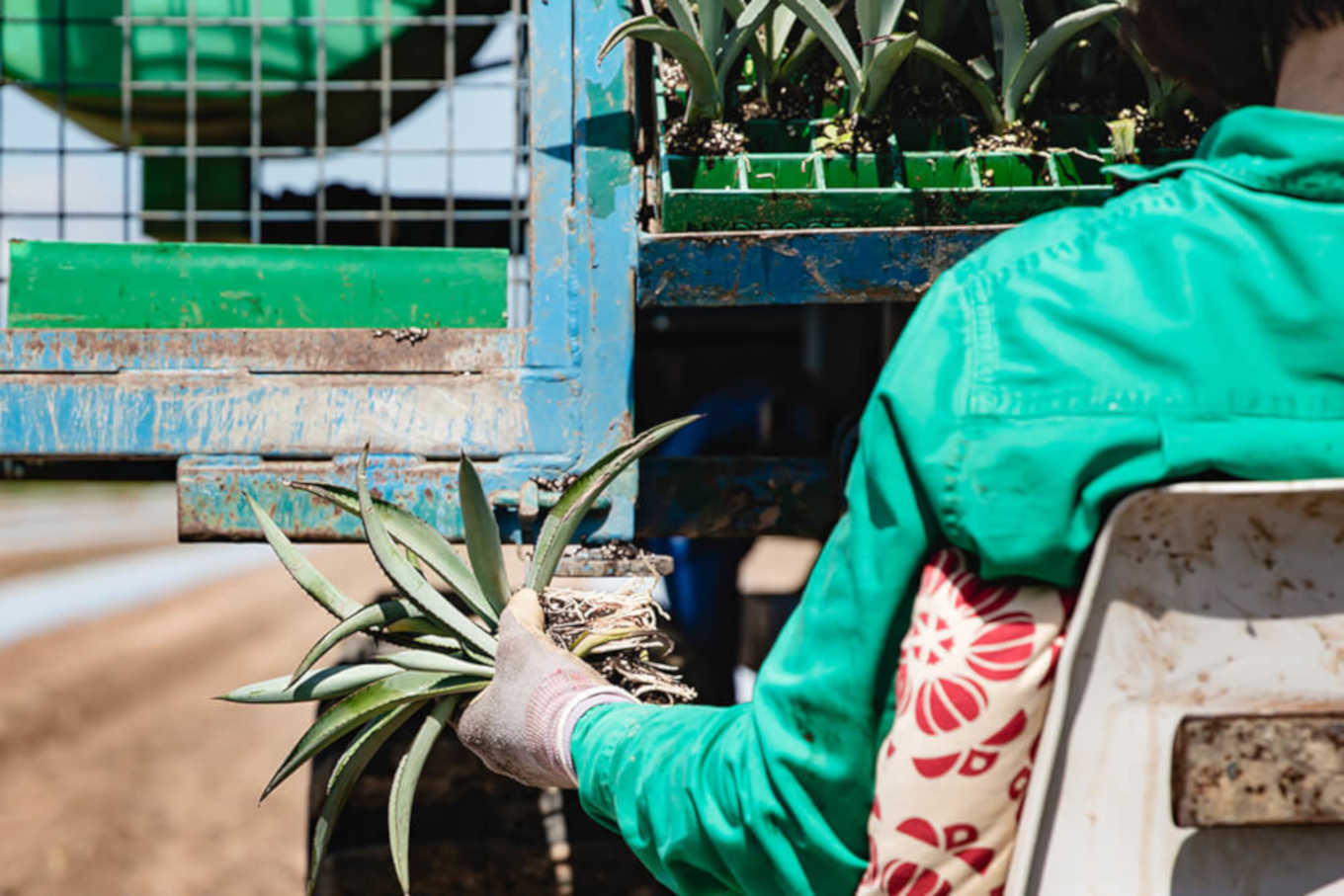 The pups and bulbils were destined for the new farm purchased near the Whitsundays in North Queensland, but the agave that was already reaching ten years was ready to turn into liquid, so experiments began.

"We reached out to Adelaide University, who have an incredible plant science department there, connected to the wine industry in South Australia, so they're experts in fermentation, and sugar transformation. We did a research partnership with them all through 2020, where they ran a heap of benchtop trials that we then scaled at Anther Distillery," says Sebastian.

Anther Distillery, just outside of Melbourne in Geelong, is an independent gin distillery founded by Sebastian and partner Dervilla McGowen – who is incredibly talented when it comes to all things fermentation and distillation thanks to a doctorate in microbiology. Dervilla has been lending her expertise to the project, with experimental ferments running once a week at the distillery and a year of R&D distillation, at small scale, from the harvested agave.

"The goal right now is not necessarily to make the best possible spirit. The goal is to make a whole range of different spirits styles and flavours, from the same raw material to understand, what are the levers that will influence flavour, and character? And then if we know what those levers are, when we start to harvest our agave we know how to dial in the style and the character that we're looking for," explains Sebastian.
Diffords Guide was lucky enough to try three of these different spirits at Melbourne Cocktail Festival in April 2021. They were indeed all very different, only one being very similar to the fresh spice you'd expect from tequila.

"I think it's too early to be conclusive, but we're really, really happy with the texture," says Sebastian. "There are a couple of broad trends that we've spotted, one of which is a really soft, round spirit. Agave spirit can, in some production, be crisp and a little bit astringent but we're getting a soft, syrupy, beautiful mouthfeel. The other trend we're seeing is alongside the classic agave flavours of cut grass and lime peel, there's a minerality to it, that we really like. It's something that we don't tend to see a lot of out of Mexico. But it's definitely too early to be conclusive."

Sebastian and the Top Shelf team are optimistic they'll have something to publicly reveal in the next three to six months.

Top Shelf aren't the only ones to be making a spirit from these aborted agave projects, however. James Becker and Mark McShaddock launched their limited-release product called Pinché after they saw a story about a trial planting of blue agave on ABC'S Landline. They repeatedly asked AusAgave for crops to distill and now have used three tonnes of pina in their Hunter Valley distillery for their product.

This is where things get exciting – we're no longer talking about abandoned crops. The Eden Lassie Farm is the future of Australian Agave. 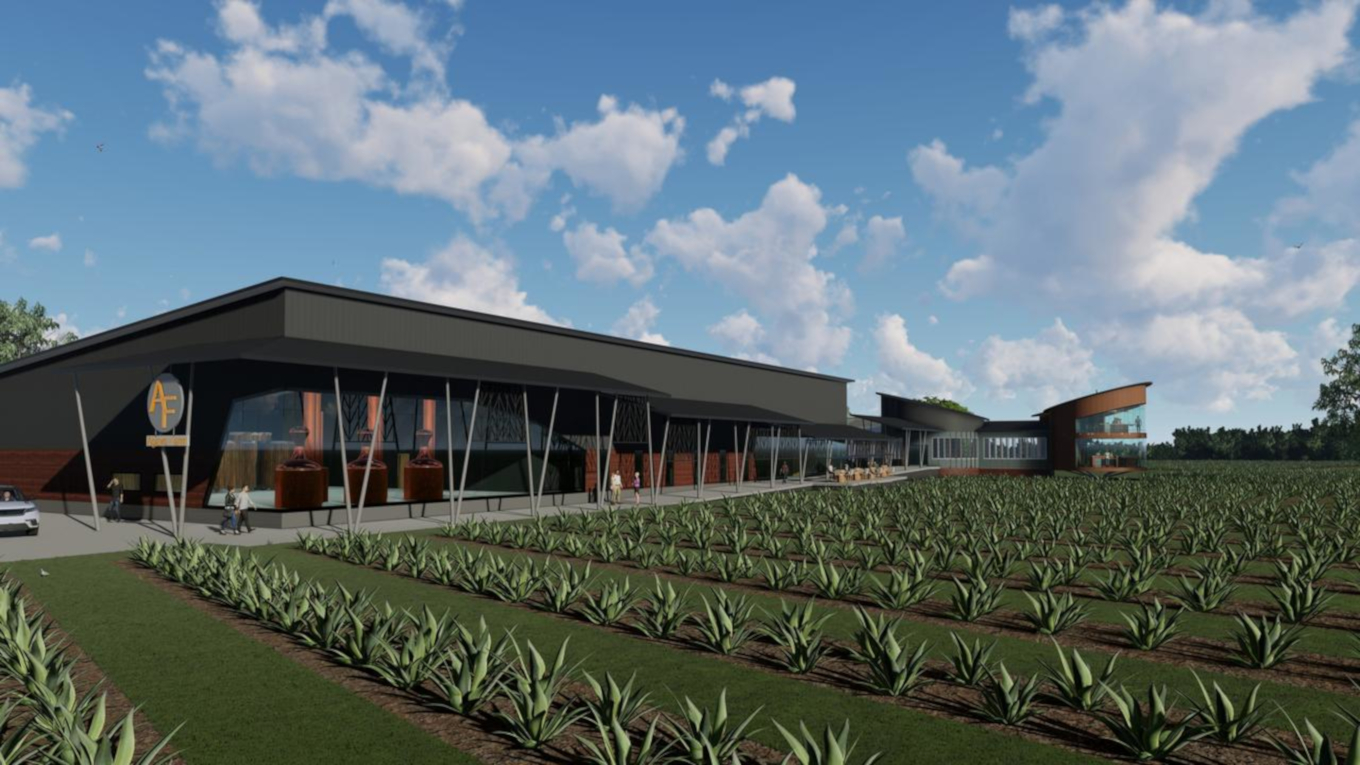 The farm is in the same region where the original crops were grown by AusAgave, in what's called the dry tropics of Queensland and the locals call the dome, where the rain barely falls. "That dry tropic is not only similar in rainfall to Mexico, but it's 20 degrees south of the equator and the town of Tequila is 20 degrees north of the equator," says Sebastian.

The agave production is impressively thought out, with each individual plant geotagged and monitored. There's already 250,000 agaves in the ground, with another 200,000 in nursery and plans for another 550,000 to join them shortly.

"We know it's the same strains, the same genetic diversity, as the original fields from AusAgave. It's the same region with the same climate, the same soil type, and we actually have some rain data from where that first crop was, so we know we're in the right moisture levels. We've got a lot of really detailed scientific data," says Sebastian.

With all the cancelled research projects there's a lot of readily available experts in Australia who have spent years thinking deeply about these plants. But how is it all going? When we spoke Sebastian just come back from a visit on the farm and says the agave was growing much more quickly than you would see in similar conditions in Mexico.

"We think some of that is from how we treated them through the nursery into the ground. But also part of that is on the agronomy side – we have half an acre set aside with 2000 plants where Chris Monsour, who is heading up agronomy, has changed the condition slightly in each row, using slightly different types of compost and nutrient, slightly different ways of weed management from very manual to traditional weed spraying. Already there are different sizes starting to show," says Sebastian.

With every plant tracked and mapped, the technology being used is quite incredible. There's a multispectral camera drone that is run over the fields to create a 3D point cloud that can effectively tell the temperature of the plant as well as the biomass or how much it's grown or not grown.

"What we're looking for is not just the size of the plant, but also the number of leaves."

This is crucial in the first two years, explains Sebastian, because an agave will set the storage capacity and the production capacity for sugar in that first 24 months. It's all about how many leaves unfurl in that central spike. "If you can imagine every extra leaf is like an extra solar panel, so there's a real exponential boost to how it will mature over time and how much sugar it's able to then generate."

As for that one million plants in the ground goal, it isn't just the biggest number the team could count to. Their reasoning for making the crop base so large is to have plant security so they can easily plant out what they harvest. On a five-year harvest cycle, they can be harvesting 200,000 a year. If the early indicators on soil conditions are right however they could even be looking at a four-year harvest cycle.

"I was very lucky to be welcomed into the production side of a couple of different distilleries in Mexico and the majority of tequilas that we're seeing on the market at the moment are between three and a half to five years old. You have to remember that most plants, when they're planted, have already been on the mother for 12 months before they're cut as a pup," says Sebastian.

A Local Boost for Australia

Apart from having a delicious agave spirit grown on home soil, the farm and distillery is already doing a lot for the area and the country.

Firstly, the distillery is looking to partner with H2 Energy, who put in renewable hydrogen energy sources. They'll be helping to hook up the distillery so its 100% run on renewables. Which is great, but better yet it gets them into the region and able to supply all the tourist and charter boats on the Great Barrier Reef that currently pump diesel into the water.

"It's strangely full circle, in that the first agave planted in Australia were planted to explore energy options. And then we get to build a dedicated distillery that runs entirely on renewable energy, it sort of completes that circle."

Secondly, the Eden Lassie Farm became the location for this deep dive into agave because the land it was on had lost its purpose. The region traditionally grew vegetables out of season for the rest of Australia because it had a very different microclimate. With the advent of extensive cover cropping further south, closer to population densities, the backbone of the region severely eroded.

Now the plants are in the ground, the experiments are well and truly underway, and the distillery is being planned, it's only a matter of time before this pie-in-the-sky dream becomes a liquid reality. Sebastian's biggest goal is to make all their findings and research available after they get a brand to market. Every little step they made in growth, planting, fermentation and distillation he wants made public. He says there's no point being the only large-scale agave producer in Australia and that to be successful you have to be part of a larger industry. Whoever takes up the challenge next will have most of the groundwork done for them.

World watch out, this could be the sparkling wine to tequila's champagne. 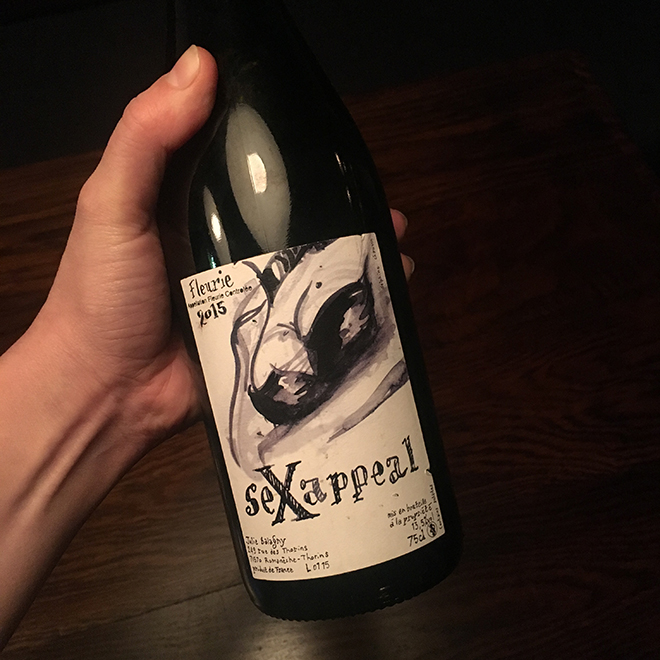