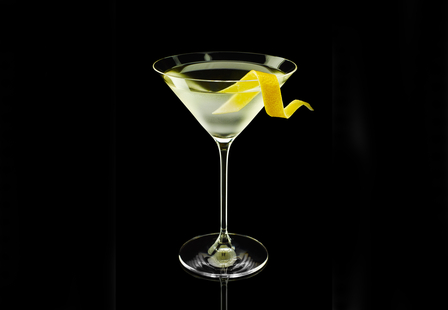 Martini Cocktail And Its Evolution

In its simplest and truest form, a Martini is a mix of gin and vermouth, perhaps with a dash or two of bitters, and garnished with an olive or a twist. However, the Martini name has been applied to a myriad of different cocktails (there are over 200 on this website), many of which are far removed from a "true Martini". Although most are served straight-up, classically in the iconic V-shaped glass.

As so often, no one really knows the Martini's origins, but the widely accepted theory is that it evolved from the Martinez, which in turn evolved from the Manhattan. This linage is complicated by numerous other variations and incarnations emerging between 1882 and 1910, creating a family of related drinks, from the Martini to the Marguerite, Martine, Martigny, Martina, Martineau and the Bradford à la Martini.

The first known written recipe for the Martinez (based on either Dutch genever or old tom gin with the addition of sweet vermouth, curaçao and orange bitters) appears in O.H. Byron's 1884 The Modern Bartender as a variation of the Manhattan. Then in the second edition of his Bartender Manual (1888) Harry Johnson included the first known recipe for a "Martini" listing its ingredients as old tom gin, sweet vermouth, orange curacao, gum, Boker's bitters and a lemon twist. A second similar Martini recipe appears in Henry J. Wehmann's 1891 Bartenders Guide, also based on old tom and additionally calling for gum syrup. 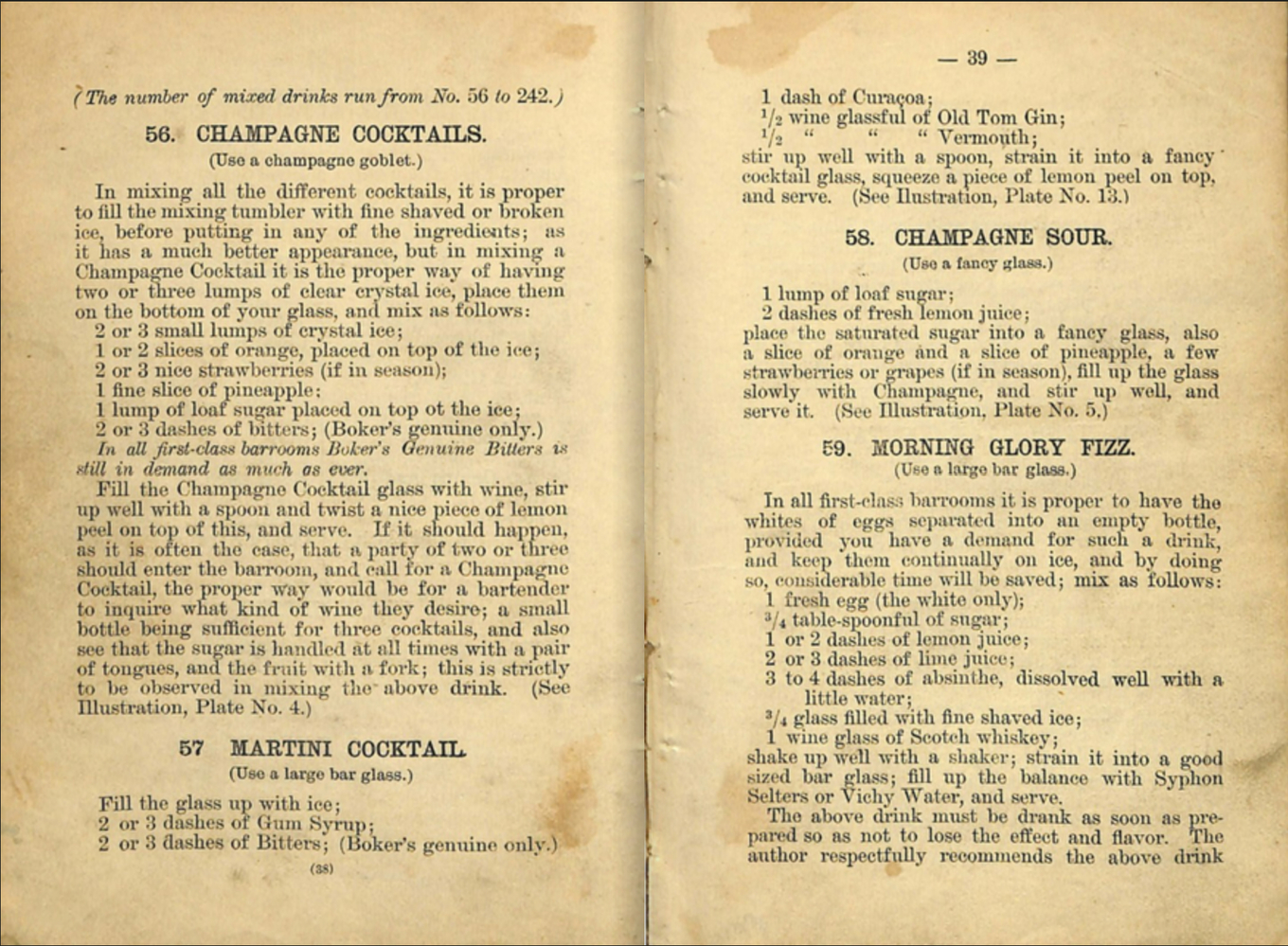 Some say the Martini is simply a renamed Marguerite, after the brand of vermouth used to make it. The earliest known Marguerite Cocktail recipe appears in Harry Johnson's 1900 Bartenders' Manual. In his 1903 Daly's Bartenders Encyclopedia Tim Daly omits the anisette in his Marguerite recipe (equal parts gin and vermouth with a hint of orange due to the use of orange curaçao, orange bitters and an orange zest twist). The Marguerite, then turns drier and by the 1904 Stuart's Fancy Drinks it becomes 2/3 Plymouth gin [a dry gin] to 1/3 French vermouth.

And, the Fancy Gin Cocktail from the 1850s can be considered a precursor to both the Martinez and the Marguerite. It also used jenever or old tom gin, combined with orange curacao and gomme, with bitters and lemon peel to balance. 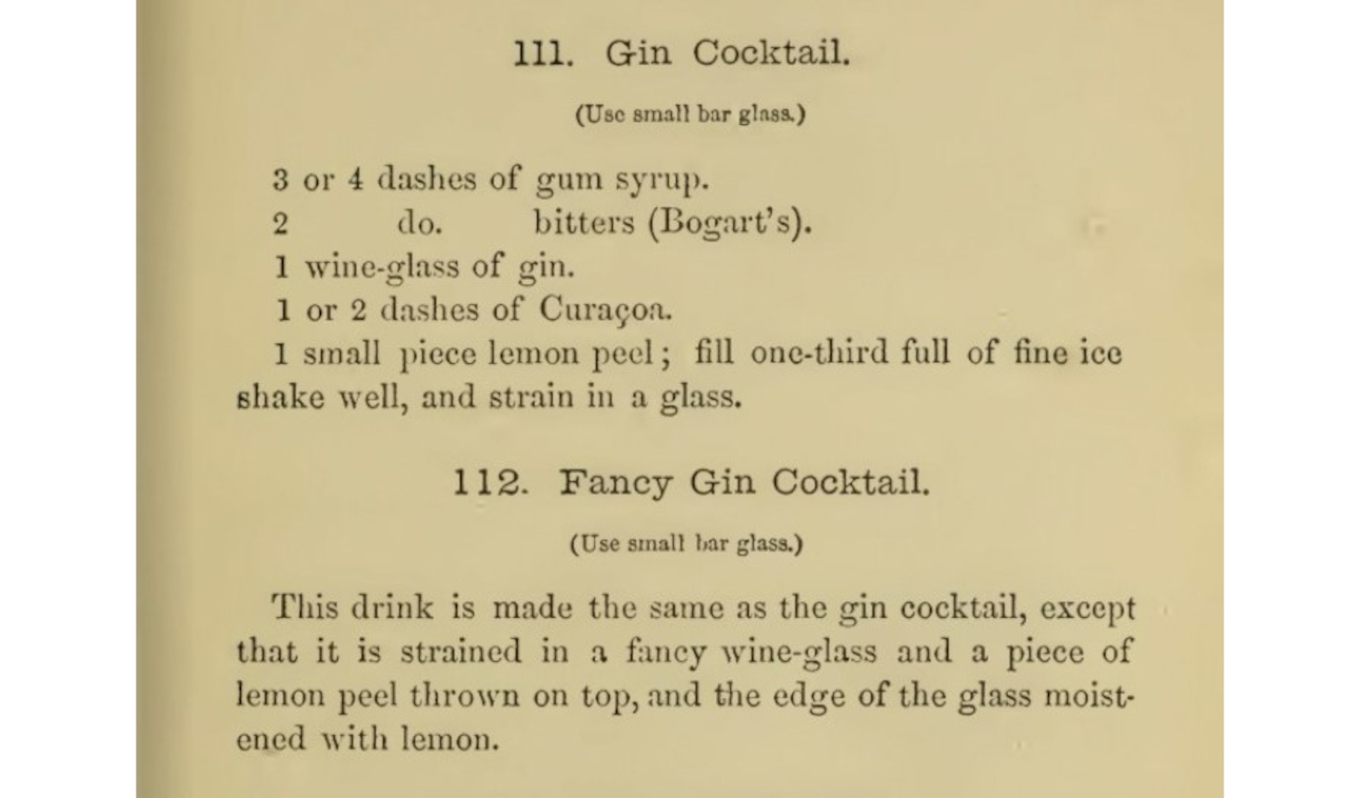 The Martini turns progressively drier. Remember, the Martini, like the Martinez and or the Marguerite it morphed from, was initially sweet, hence the need to distinguish its descendant as a 'Dry' Martini', still very heavy on the vermouth by modern standards.

The "Dry Martini" most likely appeared with the emergence of the London Dry gin style and was helped by Martini & Rossi running newspaper advertisements in the U.S. towards the end of the 19th century and at the beginning of the 20th century for their recently launched Dry Martini vermouth with the strapline "It's not a Martini unless you use Martini."

The first written suggestion of Martini's move to dry in a cocktail book is found in Tim Daly's 1903 Bartenders Encyclopedia where the recipe for a "Bottle of Martini Cocktail," which calls for 2/3 bottle of old tom gin and 1/3 bottle of dry vermouth, also states "This is supposed to be a very dry cocktail." 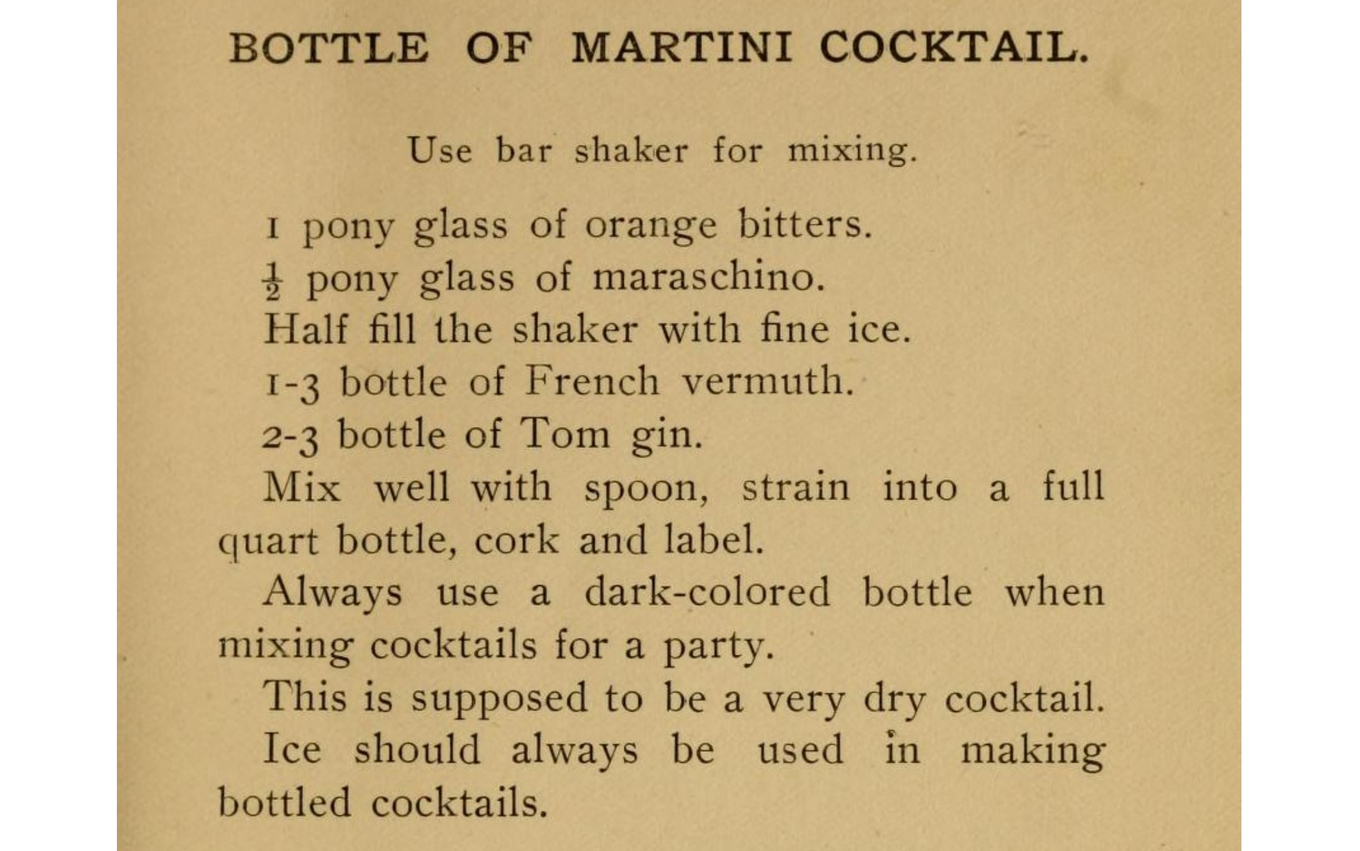 But Daly's 1903 reference was to an ingredient and a mere statement of how the drink should taste. A year later the first known written recipe for a drink actually entitled a "Dry Martini Cocktail" appears in a 1904 French book American-Bar Recettes des Boissons Anglaises et Américaine. Written by Frank P Newman, a bartender at the Ritz in Paris, the recipe broadly translates as "In a mixing glass [illustrated as glass No.1], add a few pieces of ice and 3 drops of angostura or orange bitters. Finish with equal quantities of gin and dry vermouth, stir, strain into the glass No. 5 [illustrated as a 70cl stemmed glass]. Serve with a lemon twist, a cherry or an olive, according to the consumer's preference."

Also in 1904 [perhaps even before Newman], in his Applegreen's Bar Book John Applegreen stipulates recipes for both a "Martini Cocktail" based on old tom gin and including "1 dash syrup", and beneath that a "Martini Cocktail, Dry" stipulating "Same as the above except omit the syrup."

And below that Applegreen also includes a "Olivette Cocktail", another Martini variation with a recipe calling for the addition of Peychaud's Bitters, and crucially served with an olive.

I'd argue that Applegreen's 1904 "Martini Cocktail, Dry" is the first recipe titled Dry Martini in the English language, but if you want it actually spelled out with the "Dry" in front of the "Martini" this appears two years later in Louis' Mixed Drinks by Louis Muckensturm, a European bartender working in Boston, USA. This Dry Martini Cocktail, like the Martinez, benefited from curaçao and bitters as well as vermouth. Yet, unlike earlier versions, both the gin and the vermouth are stated as being dry. According to drinks historian, Gary "gaz" Regan, the marketers at Martini & Rosso vermouth were advertising a Dry Martini cocktail heavily at that time. 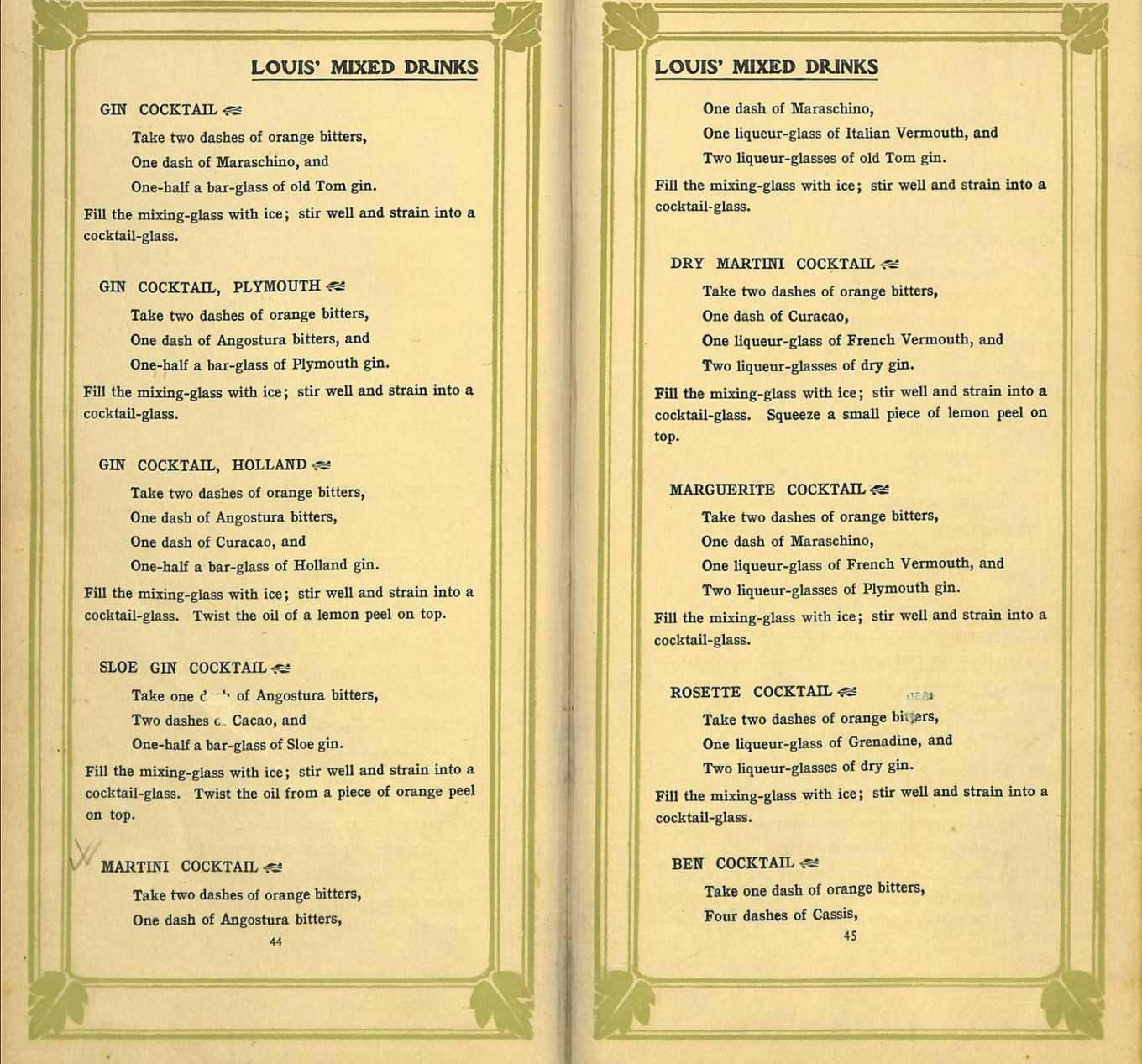 So the late 1800s and the turn of the 20th century saw the Dry Martini emerge from and dominate over its predecessors such as the Martinez and the Marguerite, and the Dry Martini became progressively drier and drier over the decades. Curaçao rapidly left the drink, but orange bitters remained a usual ingredient until the 1940s. Interestingly, these have come back into vogue with bartenders' newfound love of bitters and in many bars, once again, orange bitters are now a standard addition to a Dry Martini. [Enter arguments that their overuse is masking the delicate subtleties of the base spirit.]