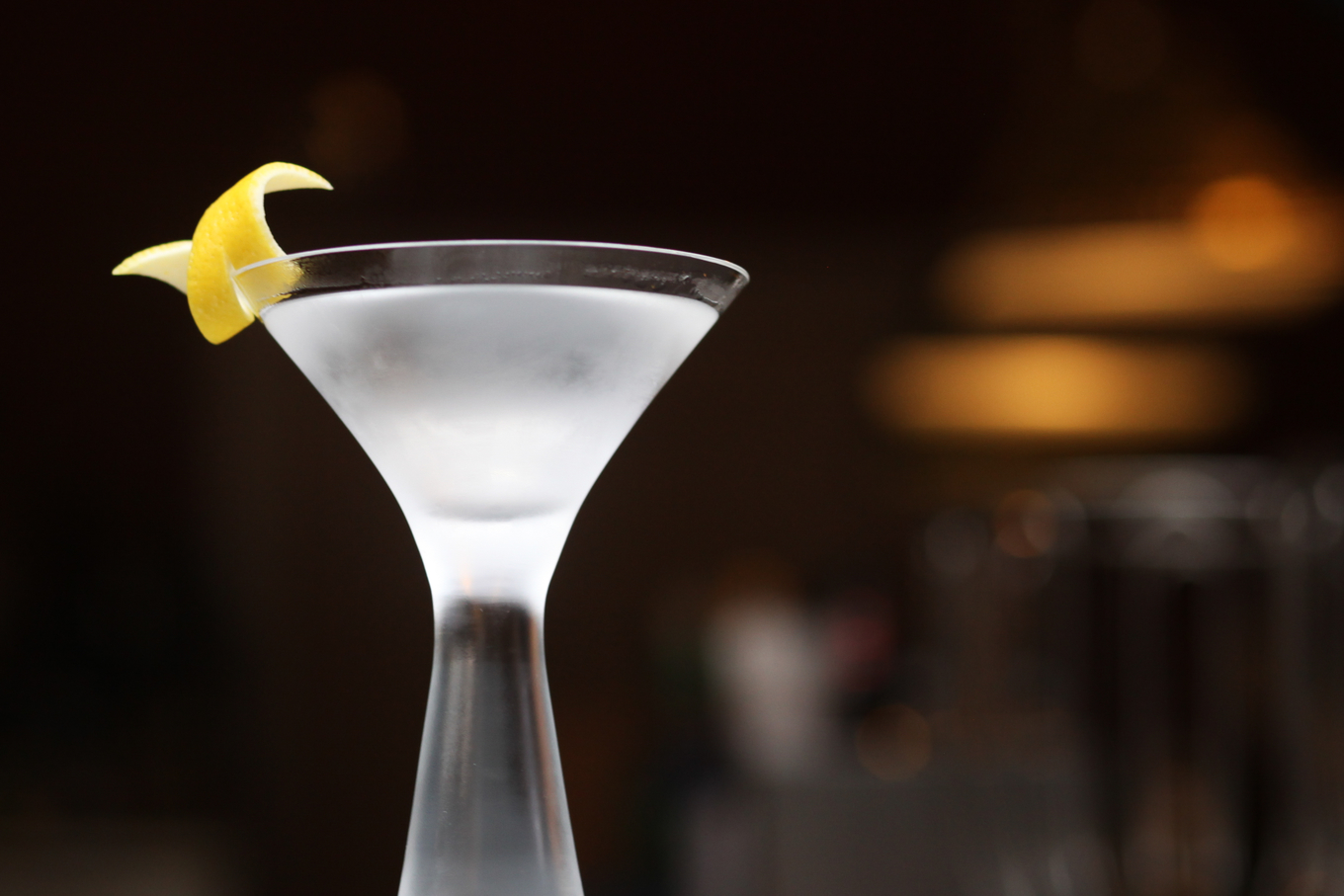 The truth behind 'Naked' or 'Direct' Dry Martini

A Naked or Direct Martini is one made by pouring freezing cold gin from a bottle stored in a freezer "directly" into a glass that has also just been pulled from a freezer and dosed with a few dashes of vermouth. There is no stirring, no shaking, and so no dilution. The extreme coldness knocks back the perceived alcoholic strength of the drink, making these Martinis all too easy to drink.

The origins of the Direct Martini

Like so many cocktails, who first came up with this method of making Dry Martinis is unknown but in his 1948 The Fine Art of Mixing Drinks, David Embury follows his disregard for a standard one-third vermouth and two-thirds gin Dry Martini with the following telling description of this style of Martini so dating its origins to pre-1948.

"In violent protest against this wishy-washy type of cocktail there have sprung up the VERMOUTH RINSE and VERMOUTH SPRAY. The first consists of rinsing the inside of the cocktail glass with vermouth, pouring it back into the bottle, and then filling the glass with ice. The second uses a special vermouth atomizer, although a perfume atomizer will do. The iced gin is poured into the cocktail glass and then given a spray of vermouth. With good, imported gin, both are acceptable, but are they Martinis?"

Salvatore Calabrese was the Bar Manager at Dukes Hotel from 1982 for over 12 years, and says "I regard those years as the foundation stones of my reputation and career within the industry. It was where I developed a reputation for what I call a Direct Martini as it is made directly in the glass.

"It came about in 1985 when a gentleman called Stanton Delaplane used to come to the bar as I opened at midday for his usual aperitif, Famous Grouse on the rocks, then off he would go for lunch. In the afternoon he would return and ask for his usual martini in this way, 'Salvatore I want it very, very cold and very dry'.

"I managed to make it cold for him by stirring it longer, but his comment would be 'yes it is cold enough but not dry enough'. So I would make his second one dry, but he would comment that it was not cold enough, this continued for several days. It became an obsession of mine, to find how to satisfy this customer's palate. One day, while I was in the canteen observing how others shook the vinegar over their chips, the idea of using a bitters bottle to control how much vermouth is added to the martini came to me.

"The first problem, to control the dryness, was solved. The second, the chill factor, was solved when I decided to store the glass and the gin in the freezer. When Mr Delaplane came for his usual martini, I could not wait for him to try my new method. I began by filling the mixing glass with ice, I then took the glass and the bottle from the freezer. When I saw how cold and dry the glass appeared I decided to dispense with the normal method and poured the frozen gin directly into the glass and then used the bitter bottle to drop the vermouth on top of the gin and obviously added a twist of lemon. In this way the aroma and the flavour of the vermouth plays its part throughout the drink.

"I still remember how, as he tasted it, Mr Delaplane's eyes, which were always very heavy, began to lift and light up and there was no comment! Then he asked for another, tasted it, again no comment! He walked away, at the time I did not know what to think.

"The next day, he came to the bar and introduced himself as a journalist with The San Francisco Chronicle and Los Angeles Times and showed me a piece that he had written for the Chronicle which described my martini as the best that he had ever tried. This was reinforced by other martini lovers who sought me out after reading his comments in many publications and that is how the legend of the Dukes martini began." 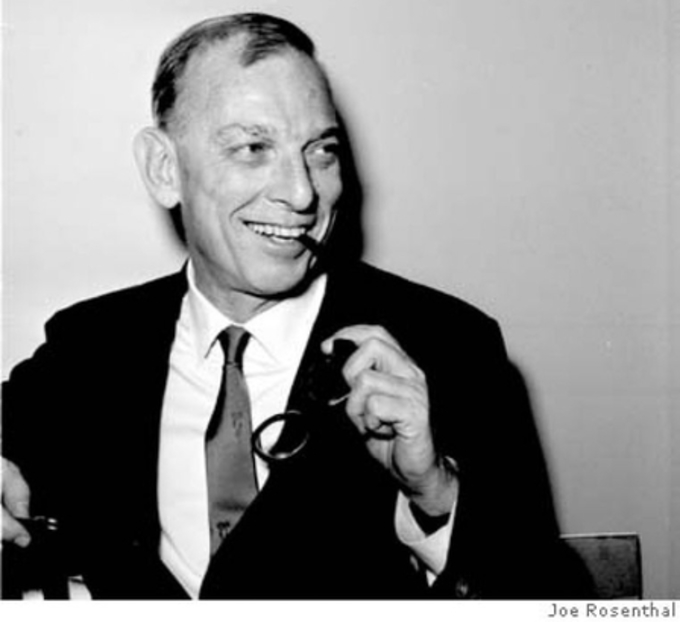 It is Stanton Delaplane who also, in 1952, discovered the Irish Coffee at Shannon Airport, Ireland and then when he arrived home, asked Jack Koepple, bartender and owner of the Buena Vista Café to recreate it. Stanton made the Irish Coffee the famous drink it is today.

The Stanton piece Salvatore refers to, where he writes about his visit to London, talks about Dukes, "Salvatore, the barman, makes the best martini in England." In the Los Angeles Times, on 8th November 1987, Stanton also wrote about his visit to London, "Stop off first at Dukes and have Salvatore make you a martini. He's got the touch." (See article at foot of page.) 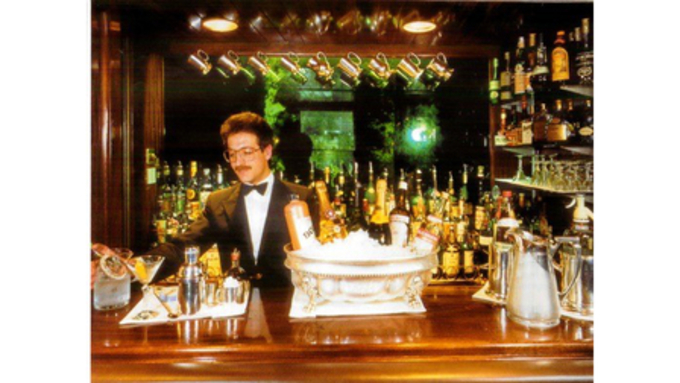 Salvatore Calabrese behind the bar at Dukes Hotel in the 1980s

Kingsley Amis also wrote about Dukes around the same time, saying, "The bar here has a barman to match. He may have an equal or two somewhere in the capital but I think no superiors. We all know (if we are any good) how hard it is to produce not just a well-balanced Dry Martini but simply one that stays cold enough for long enough without the base recourse of ice cubes in the drink. It was achieved all right at Dukes Hotel."

Gilberto Preti, who Salvatore first employed as his number two in 1988, continued the Duke's 'Direct Martini' tradition with his own indomitable style after Salvatore left to open the Library Bar at London's Lanesborough Hotel in 1994. As Salvatore says, "he's a great bartender who deserves all the acclamation he has received. The tradition continues with the guiding hand of Alessandro Palazzi and long may it last."

Obviously having a well-frozen glass and bottle of gin is key to the success of this cocktail, so place your glasses and bottle in the freezer at least two hours before you intend to make your martini.

You can simply pour the vermouth and gin directly into the frozen glass and serve without any dilution whatsoever. However, there is a trick Salvatore taught me to introduce the merest hint of dilution to the drink, so opening it up, without compromising coldness. This is achieved by swirling small amounts of water around the inside of the glass while the glass is stored in the freezer. By this method you can build a thin layer of ice on the inside of the glass, which will melt when the vermouth and vodka is poured, so giving some dilution.

I like to pour a 2.5ml (1/12oz) measure of vermouth into the frozen glass and swirl around, before pouring in the frozen gin. This gives a precise, consistent 30:1 ratio martini with the water (melted ice), vermouth and gin well integrated throughout the drink. However, Salvatore's method of using a dasher bottle to aromatise the surface of the gin adds theatre to the serve while delivering more vermouth aromatics. 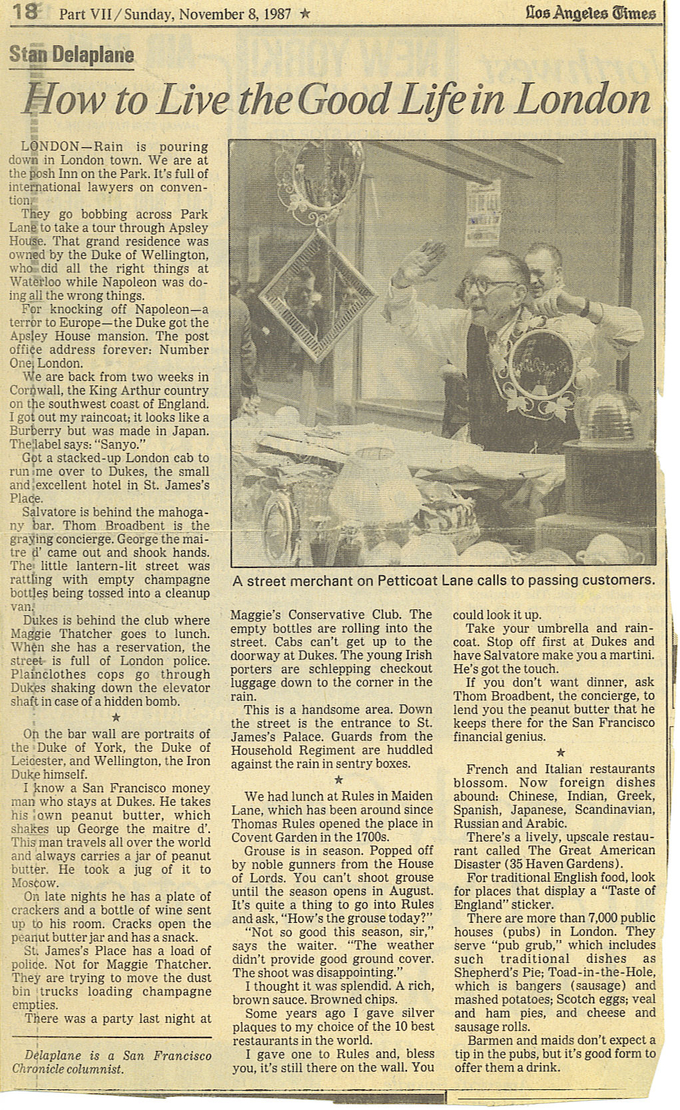 One of many articles in which Stanton Delaplane mentions Dukes, Salvatore and his martinis. For more such articles click the arrow to the right of the top image to scroll 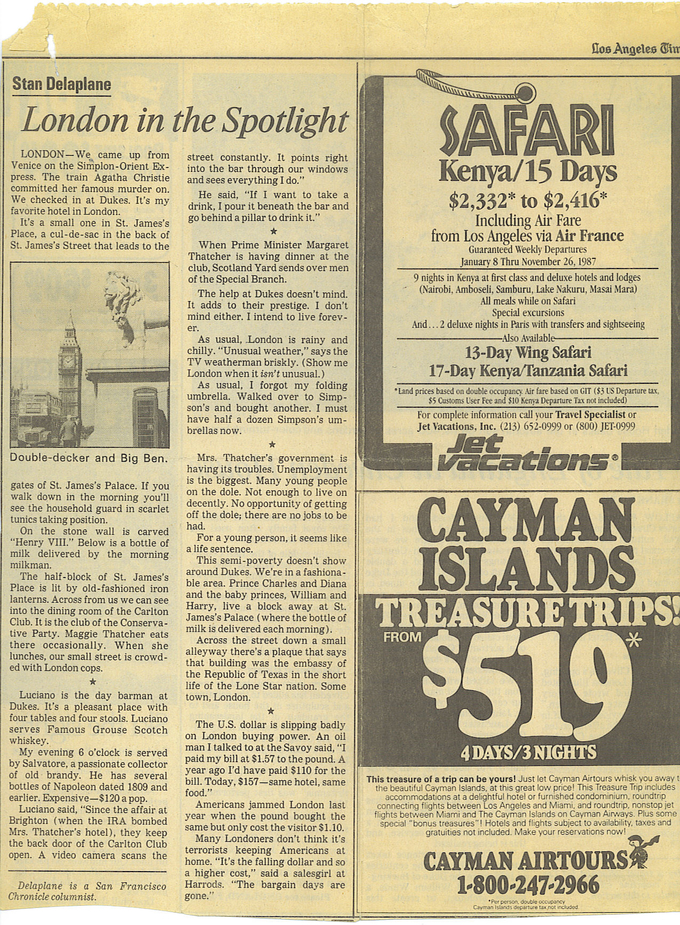 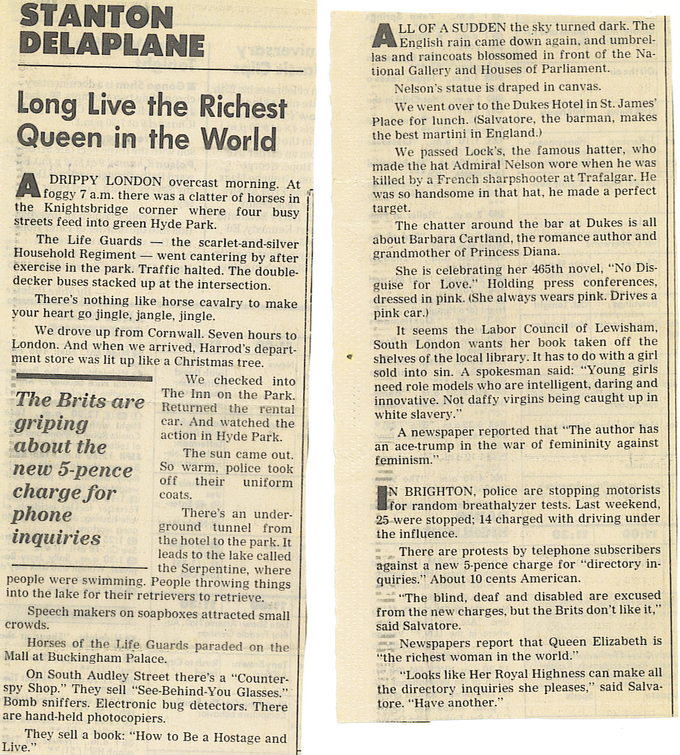 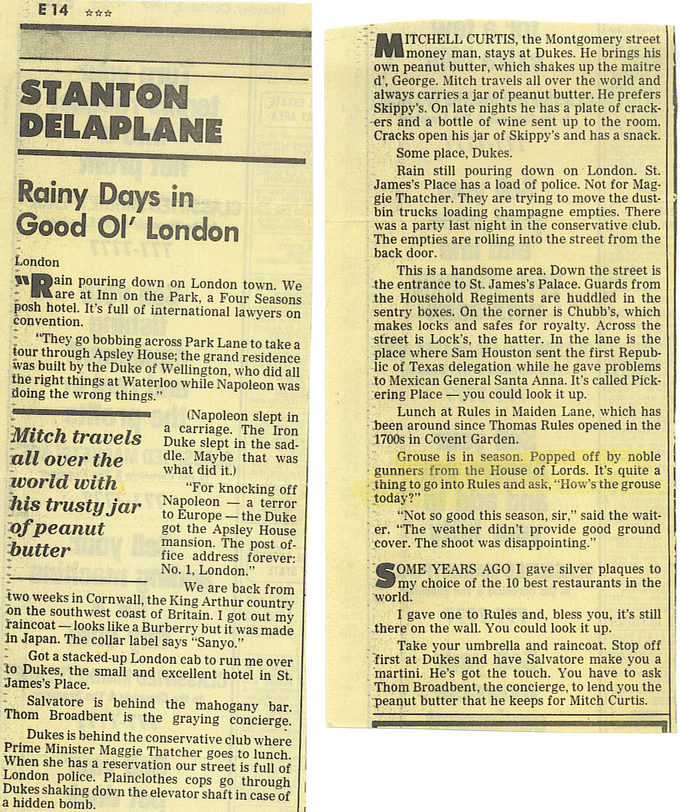 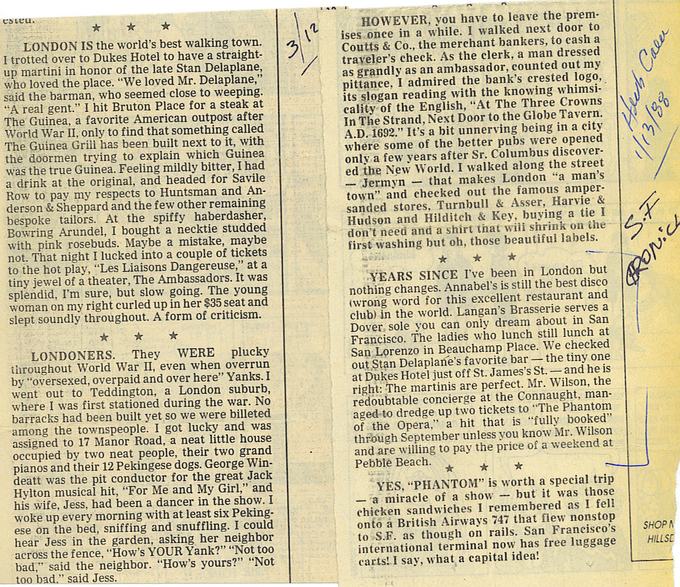 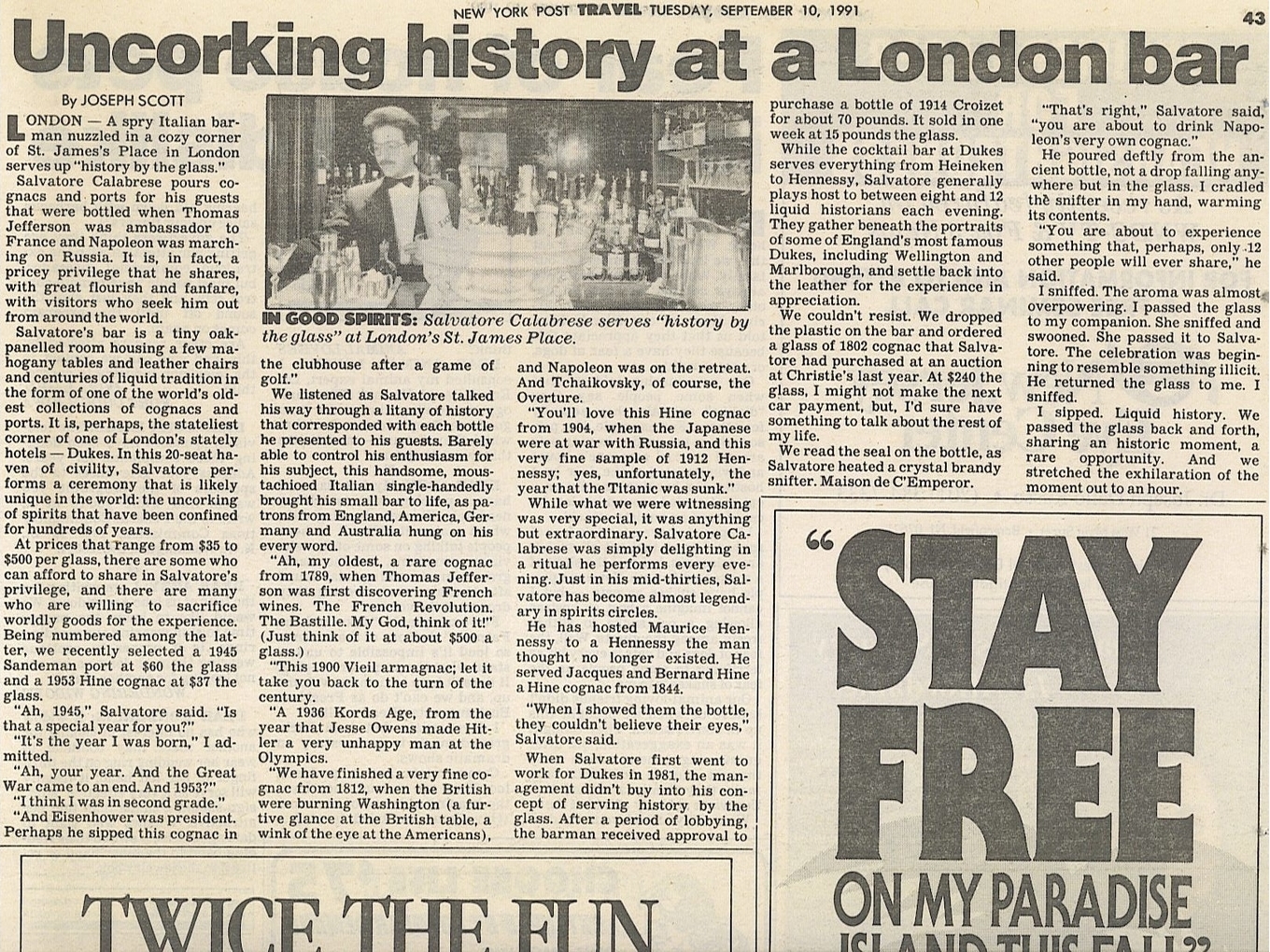 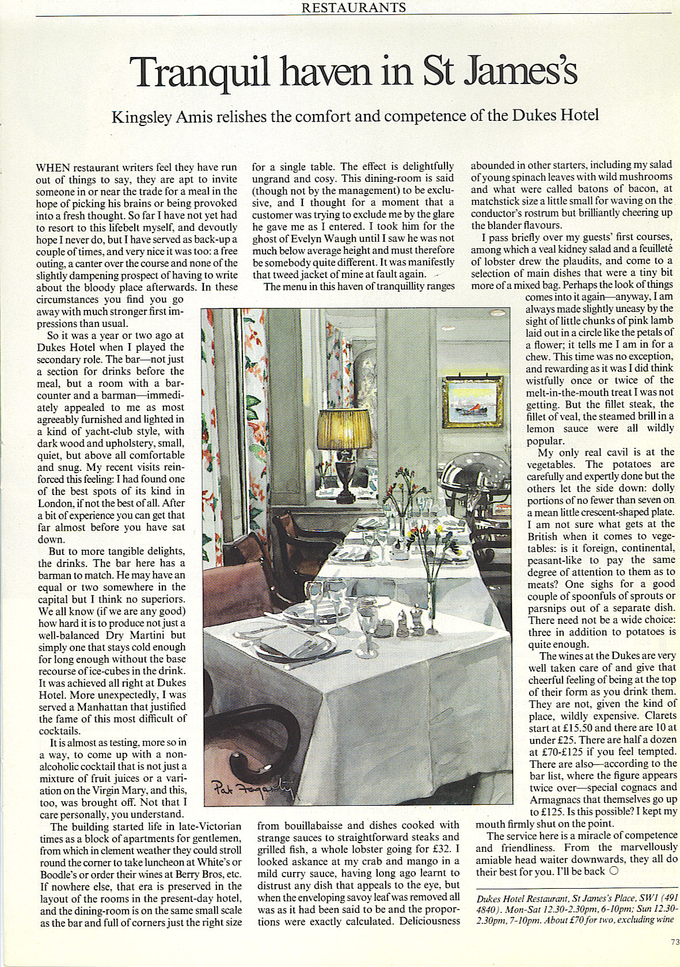 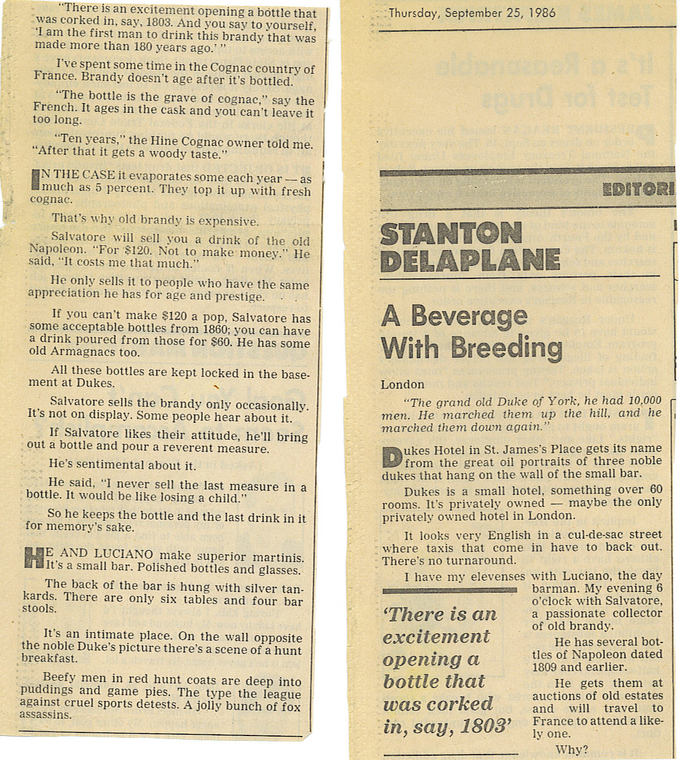