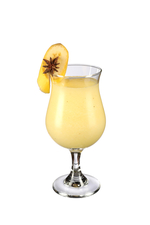 Go Bananas! It's National Banana Lovers Day. Today we celebrate the world's favourite fruit, and rightly so, as this delicious snack packs a healthy punch underneath its distinctive yellow peel.

Bananas are potassium-rich, high in fibre and boast a slew of vitamins and minerals including vitamin C, magnesium, zinc and vitamin B6. They're rich in antioxidants and can reduce the risk of heart disease and depression. So it's little wonder that almost 100 billion bananas are consumed worldwide every year.

Here are some fun facts to go bananas for:

And in a nod to this final fact, today we'll be celebrating Banana Lovers Day with an oh-so-good Nuclear Banana Daiquiri. As one discerning drinker put it, this one is "Banana slushie heaven with a KICK!".

Venus may be named for the goddess of love, but she's a savage planet. The surface temperature reaches around 500°C (over 900°F), the atmosphere is as dense as deep ocean and the planet is permanently covered in cloud.

If humans could breathe the sulphur-laden air, it would stink of rotten eggs. We would know little of this without the Mariner 2 spacecraft, which took off from Cape Canaveral this day in 1962, and came within 35,000 kilometres (21,700 miles) of Venus on Earth's first interplanetary mission. We are toasting the spacecraft, whose last transmission was received on 3rd January 1963 and remains in heliocentric orbit, with a Cherry Marnier but you may prefer a fruity Venus in Furs or even a Venus Cocktail.

It's the anniversary of the loudest explosion ever

Just after 10am on 27th August 1883, the magma chamber below the volcanic island of Krakatau, in what is today Indonesia, exploded, with over 25 times the power of the biggest nuclear explosions in human history.

The sea rushed in, sucking ships towards it, and then the 850m peak collapsed, sending tidal waves at least 30 meters (100 feet) high rushing towards the coast, obliterating villages and killing at least 36,000 people. The noise of the explosion was audible over at least a third of the globe. On an island off the coast of Africa, so far away that the sound took four hours to reach there, it sounded like the "roar of heavy guns"; in Alice Springs, Australia.

So much ash was thrown up in the sky that temperatures were disrupted for five whole years, and there were pumice islands in the sea for many months. In honour of this dramatic event, and in the hope that we don't get another one for a long time, we are drinking a much-maligned but really rather fabulous 1960s favourite, the Harvey Wallbanger.