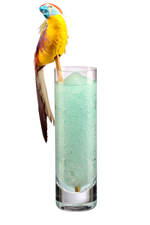 1969 was quite some year. The world celebrated the first man on the moon, 350,000 fans attended Woodstock, the Beatles gave their last performance on the roof of Apple Records, but by far the most momentous thing to hit the world in 1969 was..., "and now for something completely different", Monty Python's Flying Circus.

Written by the six Python members, the ground-breaking British comedy series delivered Pythonesque humour to a world that had previously been bereft a Department of Silly Walks.

But it was on this day in 1969 when the eighth episode aired on British television and a sketch involving a Norwegian Blue became one of the comedy troupe's most memorable and widely quoted skits of all time. John Cleese plays a disgruntled customer trying to return his deceased parrot to a pet peddling shop owner, played by Michael Palin. The Norwegian Blue may be noted for its "lovely plumage" but there is no such species of parrot. Or indeed dead parrot.

However, the skit was not a total fabrication and stems from a real incident involving a car salesman who refused to accept there was a problem with Michael Palin's car, even as it fell apart in front of him.

We're toasting the Pythons and their Norwegian Blue with our own rendition of the Dead Parrot.

It's over 40 years since Apollo 17 and despite all the scientific and engineering advances over those four decades, Mission Commander, Eugene Cerman was the last person to walk on the moon. Will we see more men, or women for the first time, on the moon?

Well, even with the technology of the 1960s and 1970s, it was considered both safer and cheaper to send machines into space than to send humans. But that's not stopping the new wannabe superpowers from rising to the challenge. China wants to put a man on the moon by 2030, Russia had promised 2020 and India by 2025.

If you ever dreamed of being an astronaut as a kid, today is a great day to remember those dreams, by toasting astronauts past, present and, we hope, future with a Moonlight Cocktail by the much-missed Gary "gaz" Regan.

The bicycle tyre was patented today

On this day in 1888, an Ayrshire vet named John Boyd Dunlop received a patent for a groundbreaking invention - the pneumatic bicycle tyre. Why was this important? Because inflated rubber tyres roll better and faster than the previous solution - metal wheels. Which was rapidly proved as bike racers equipped with Dunlop's tyres ran rings around the competition.

Dunlop wasn't, in fact, the first person to patent the pneumatic tyre - someone else had had the idea over 40 years before. And he wouldn't make much money from his invention. Instead, the Dunlop Pneumatic Tyre Co., founded to buy up and monetise Dunlop's invention, took much of the glory and almost all of the cash. (And, yes, they'd later go on to make both car tyres and those iconic retro plimsolls.) We are toasting Mr. Dunlop, whose genius, like so many inventors', went largely unrecognised and unrewarded, with an aptly named (but Americanly spelled) Fat Tire, a bittersweet concoction based on aged rum.