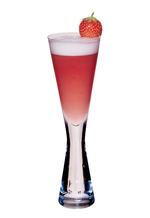 On this day in 1964, the Beatles officially cracked America - making them still one of very few British bands to have achieved this difficult feat.

More than 73 million Americans - more than 40% of the population - tuned in to watch them perform live on the Ed Sullivan Show. How come? Well, Ed Sullivan, then a legendary host of a TV variety show, had been travelling through London when his plane was delayed by a gaggle of screaming girls. Wondering what all the fuss was about, he came across the Beatles. The Beatles' legendary manager Brian Epstein finagled his interest into three TV bookings and a signing with Capitol Records; by the time they finally made it onto the show, they were already number one.

Today only Paul and Ringo survive: Paul is, of course, Sir Paul McCartney, and Ringo - Sir Richard Starkey - gained his honours in 2018. Still, we're toasting the Fab Four, one of the all-time great British bands, with an Absolutely Fabulous.

It's that Carmen Miranda's birthday

Carmen Miranda was born in a northern Portuguese village this day in 1909. When she was still a baby, her parents emigrated to Brazil though, and settled in Rio de Janeiro where her father opened up a barber shop. Before Carmen Miranda was discovered as a singer, she worked in a tie shop and then in a boutique where she learned to make hats. By 1946 though she was Hollywood's highest-paid entertainer, and top female tax payer in the United States.

Miranda was nicknamed The Brazilian Bombshell, and was renowned for her sexy samba moves, her huge platforms and her enormous fruity hats. We were wondering what drink we should be quaffing tonight in remembrance of Miranda, and decided that Fruits of the Forest contained a great deal of hear headdress, so might be a good one to at least start off with.

The anniversary of Princess Margaret's Death

The original bad girl princess, Princess Margaret died 9th February 2002, after a life dominated by an awe-inspiring consumption of nicotine and alcohol.

How awe-inspiring? Well... The Princess was patron of the Girl Guides Association. In anticipation of her visits, the Guides had to keep a bottle of Famous Grouse scotch whisky on hand, with one Guide tasked with following her around the room holding an ashtray. Clearly, the lady had style. During and after her marriage to the photographer Anthony Armstrong-Jones she was an icon of the British 60s, hanging out with friends including Mick Jagger and Peter Sellers, and partying like a demon on the private island of Mustique.

Margarita is, of course, Spanish for Margaret, and a cocktail that goes down on tropical beaches the world over, not just Mustique. So we will be toasting the departed with a glass of Margarita served frozen.

... comment(s) for The Beatles conquered America