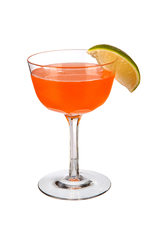 We're celebrating what the Oxford English dictionary defines as "a person serving drinks at a bar" but we know as creative, hard-working folk who satisfy the needs of their customers, not just with drinks.

What makes a great bartender? Naturally, we enjoy balanced and tasty drinks. Not to mention, impeccable service - those who go above and beyond to make you feel welcomed at their bar.

So today we are toasting all bartenders, from legends such as Dick Bradsell, Jerry Thomas, Harry Craddock and Ada Coleman, just to name a few, to those still behind the stick, with a Naked & Famous, equal parts and mezcal-based with Chartreuse, surely a cocktail for bartenders created by one of our favourite bartenders, Joaquín Simó.

Barnett Isaacs was born back in 1852 in the Whitechapel slums of London.

Isaacs was a wheeler-dealer entrepreneur right from the beginning. At the age of 21, Barnett sniffed out the diamond rush, so decided to change his name, and headed off to South Africa to make his fortune. Sure enough, he earned his first million within a few years, and went on to sell his company to Cecil John Rhodes with the purchase cheque, signed by Rhodes, then said to have been the largest ever presented for payment.

It goes without saying that Barnett (by this point Barney Barnato) was a legend back home. If his entrepreneurialism wasn't enough, then he definitely reached iconic status by his dramatic death. In 1897, Barnato was sailing back to England when he disappeared overboard - whether he was pushed, fell or jumped will never be known!

The cocktail we're recommending today was adapted from Harry Craddock's The Savoy Cocktail Book from the 1930s - mix one tonight, and impress your friends with the dramatic history behind the Barney Barnato.

The old calendar had been inherited from Julius Caesar, whose calendar allowed precisely 365 and a quarter days for each year, with a leap year every four years. Unfortunately, that left almost 11 minutes in every year unaccounted for, and over the centuries, the date of events like the equinox had slipped by more than a week. Gregory's solution? To add ten days to the current date, and make all years that are exactly divisible by four a leap year.

As it still amazes us what a difference those few ticks of the clock can make, we are drinking a Clockwork Orange No.2.

Despite the fact that much of Romania still has snow on the ground, today is, pretty much, the first day of spring. And in some Romanian villages, it's still celebrated the way it was in Roman times - by honouring the pagan god of love, Dragobete.

Today, young men and young women are supposed to head out into the forests and meadows to - ahem! - gather spring flowers, then engage in a game of kiss-chase back to the villages. Married women have to touch strange men for good luck; any man who annoys a woman will have bad luck for the rest of the year; and, if you're truly traditional, love potions made with melted snow work wonders.

In honour of these woodland romps, we're drinking a very foresty-sounding cocktail, the Woodside. Darren Thrower, its creator, actually named it for a classic jazz track. Cheers!