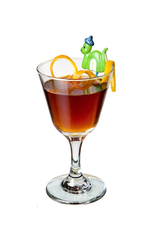 The sighting of the Loch Ness Monster by Mr and Mrs Spicer on this day in 1933 is our particular favourite as Nessie was out of the water. Although the monster had been spotted before, national interest was particularly sparked when George Spicer and his wife saw "a most extraordinary form of animal" cross the road in front of their car and enter Loch Ness.

A lot of people have dedicated a lot of time to seeking out the Loch Ness Monster, a creature, real or imagined, that has plenty of places to hide as the Loch (a Scottish lake) contains more water than all the lakes in England and Wales combined. We think the Spicers and all the Nessie 'hunters' should be applauded - if for nothing else than the entertainment they've given us - with a Nessie cocktail.

Today is 22/7. Which, you will - of course - recall from school, means three and one-sevenths, or a close approximation to the irrational number, Pi.

Nobody has calculated the complete value of Pi, which describes the relationship of the outside measurement of a circle to its diameter - it can't be expressed either as a fraction or a decimal. All the same, some historians believe the Ancient Egyptians used the ratio to build the Great Pyramid at Giza more than four thousand years ago. And mathematicians have been grappling with this crazy number for pushing four millennia too.

Today maths teachers and professors around the world will endeavour to engage their students in approximating Pi. We are sticking to a more enjoyable type of Pi - a Key Lime Pie Cocktail.

Poor Mary Magdalene. Famous for centuries as a prostitute who felt guilty and reformed, she gave her name to generation after generation of sex workers.

The lady was nothing of the sort. She is recorded, in fact, as one of Jesus' disciples, one of the most informed and wisest. Yet as the liberation movement that Jesus had founded, based on equal rights for women, children, slaves and the like, turned into a religion, so Mary of Magdala was transformed into a prostitute.

... comment(s) for Anniversary of the Loch Ness Monster's fame