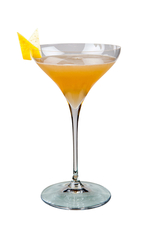 They were the inspiration of Allen Lane, who, travelling home from a weekend visiting Agatha Christie in Devon, was frustrated at the lack of cheap but good fiction available at Exeter railway station. The original Penguin books were colour-coded and included works by Ernest Hemingway, Dorothy L. Sayers and Agatha Christie. Each one cost just six pence, at a time when hardcovers were priced at seven or eight shillings.

The new concept was an instant success and Lane went on to launch Penguin as a standalone publisher in 1936. Within a year, Penguin had sold three million paperbacks, many of which would go on to become classics, so today we'll be drinking none other than a Classic Cocktail.

It's the anniversary of the world's first car ad

On this day in 1898 the Winton Motor Carriage Company suggested to readers of Scientific American that they might want to "dispense with a horse", unknowingly making advertising history. It was a particularly telling line since, at the time, other road users would turn around and howl at drivers of these new-fangled vehicles to "get a horse".

Winton's motor carriage cost a princely $1000, or about £20,000 today, and could reach speeds of an amazing 20mph. And the ad worked. Winton sold more than 20 of the newfangled motor vehicles, one of them to James Ward Packard, who would go on to found his own car company.

We are toasting the magic that is the modern car with a Gennaro's Sidecar, named for Jamie Oliver's mentor, Gennaro Contaldo.

This day in 1863, Mrs Mary Ford produced a son, Henry, one of five children who would go on to live to adulthood. And, more importantly, set the foundations of modern car culture and automated factory production, a mixed blessing which has shaped the modern world more than even Mr. Ford himself could have imagined.

A natural engineer, Henry was repairing watches in his teens, and fixing a neighbour's steam engine by age 20. Before he was 30 he had outlined his apparently insane plan to build "a gasoline-powered horseless carriage", and within five years he had managed it. Shortly before his fortieth birthday, the Ford Motor Company Henry founded would sell its first car: within five years, he would launch the Model T, the first petrol-powered vehicle that was affordable for individuals who were not super-rich.

We're toasting a visionary with a dubious heritage with an aptly named The Montford.

In January 2011, Arnold Schwarzenegger completed his second term as Governor of California and returned to acting. And, while he didn't say "I'll be back", perhaps... In October 2013, the New York Post reported that Schwarzenegger was exploring a future run for president.

Ferociously ambitious, Arnie began his career in bodybuilding, winning Mr Universe back in 1965, and becoming the youngest ever Mr. Olympia aged only 23. Despite never shedding his Austrian accent, Schwarzenegger transitioned successfully into movies, breaking through in the high camp Conan the Barbarian - and defining himself for better or worse as the original Terminator.

As Governor of California, he overcame sexual harassment allegations, not to mention queries over his use of marijuana and steroids, but couldn't fight his state's economy. We are toasting the former Governator with a drink that bears a version of his name: the Arnaud Martini.