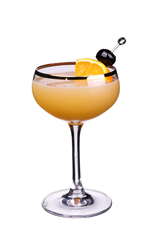 Octopuses are of course known for their eight semi-autonomous arms lined with thousands of suckers. But this remarkable creature also has blue blood coursing through three beating hearts, and highly developed intelligence with 500 million neurons in their brains and arms. Octopuses have been around for 300 million years so pre-date the dinosaurs.

The Octopus is surely an animal worthy of toasting, but International Octopus Day is about awareness rather than celebration - the octopus is at risk from overfishing. As are some of the other cephalopods honoured over the forthcoming International Cephalopod Awareness Days:

So perhaps consider the vegetarian option rather than the octopus if eating out tonight and ponder this fascinating creature of the deep whilst sucking on a Eight Foot Fizz, or perhaps a Ward Eight.

The nation of Croatia sprang into being on this day in 1991, after a long and bloody war with forces from the former Yugoslavia. Now, we're guessing you don't know a great deal about Croatia, apart from, perhaps, the fact that it's home to former Wimbledon winner Goran Ivanosevic and has some damn fine beaches.

But Croatia's claims to fame include Dalmatian dogs, which apparently originate on its Dalmatian coast, the invention of the tie (the word cravat apparently derives from the term Croat), the world's largest truffle, and the stone that went to build the White House.

We'll be celebrating the nation's independence with a Plum Cocktail, a drink that includes the national spirit of Croatia and much of the Balkans - slivovitz plum brandy. You might also take the opportunity to toast the country's contribution to neck adornments with a Black Tie cocktail.

On this day in 2008, the then chancellor, Alistair Darling, announced a brave move to salvage the British banking sector. Because the banks were refusing to lend to each other, the UK government (aka the taxpayer) would lend to them instead.

Yes. The British taxpayer was going to be paying the salaries of some of the UK's highest earners, as well as owning a couple of hopeless banks. The bailout cost £500 billion, or enough to run the NHS for almost five years. And that was just the start of it. At its peak, the bank bailout was running at a cost of almost £1 trillion.

We are marking this anniversary with the rather excellent The Alamagoozlum, a cocktail created by the late, great J. P. Morgan, who might have required his government to invade somewhere but would never have taken a bailout.