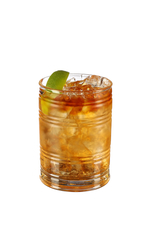 Candy corn - the sweet treat favoured by Americans in the autumn - has its own national day! Typically eaten around Halloween, candy corn was created in the 1800s by a gentleman named George Renninger who worked at the Wunderlee Candy Company. He set out to create a bright sweet that reflected the red, yellow and orange colours of autumn and celebrated the humble corn on the cob.

Originally named 'Chicken Feed', candy corn was one of a host of agriculturally inspired treats, and it was marketed to a largely rural society. In 1898, the Goelitz Confectionery Company (now known as Jelly Belly) started the mass manufacture of candy corn, and it became an affordable and popular treat.

The rise of advertising in the 1950s is when candy corn became really synonymous with Halloween, and people began to give out bags of these delicious morsels to trick-or-treaters - a perfect sugar boost for an evening of fright and delight.

Here at Difford's Guide, we're more about the 'delight' than 'fright' so how about a Corn 'n' Oil or a Corn On The Cob to celebrate?

Or, in Detroit, Michigan where it's especially celebrated, for the charming neighbourhood tradition of arson, which began in the aftermath of World War II as kids smearing cars with toilet paper and throwing blazing bags of faeces onto neighbours' doorsteps. Add in a stack of abandoned and derelict houses from the 1970s, and you have arsonist heaven. Thankfully, since the 1990s the city has successfully rebranded tonight as Angel's Night, with volunteers hitting the streets to protect against arson.

We're hoping the Detroit Fire Department have a quiet night and we're taking the opportunity to indulge not in an Angel's Share, but its opposite number the Devil's Share.

Don't leave it until the last minute, or even too late altogether, but seize the day today, save your relatives the heartache and plan your own funeral now.

Yes, this is a real day on the annual calendar and it was created in 1999 to get people talking about their own funeral. After having what might not be the cheeriest conversation of your life, we suggest you brighten things up with a Gloom Lifter.