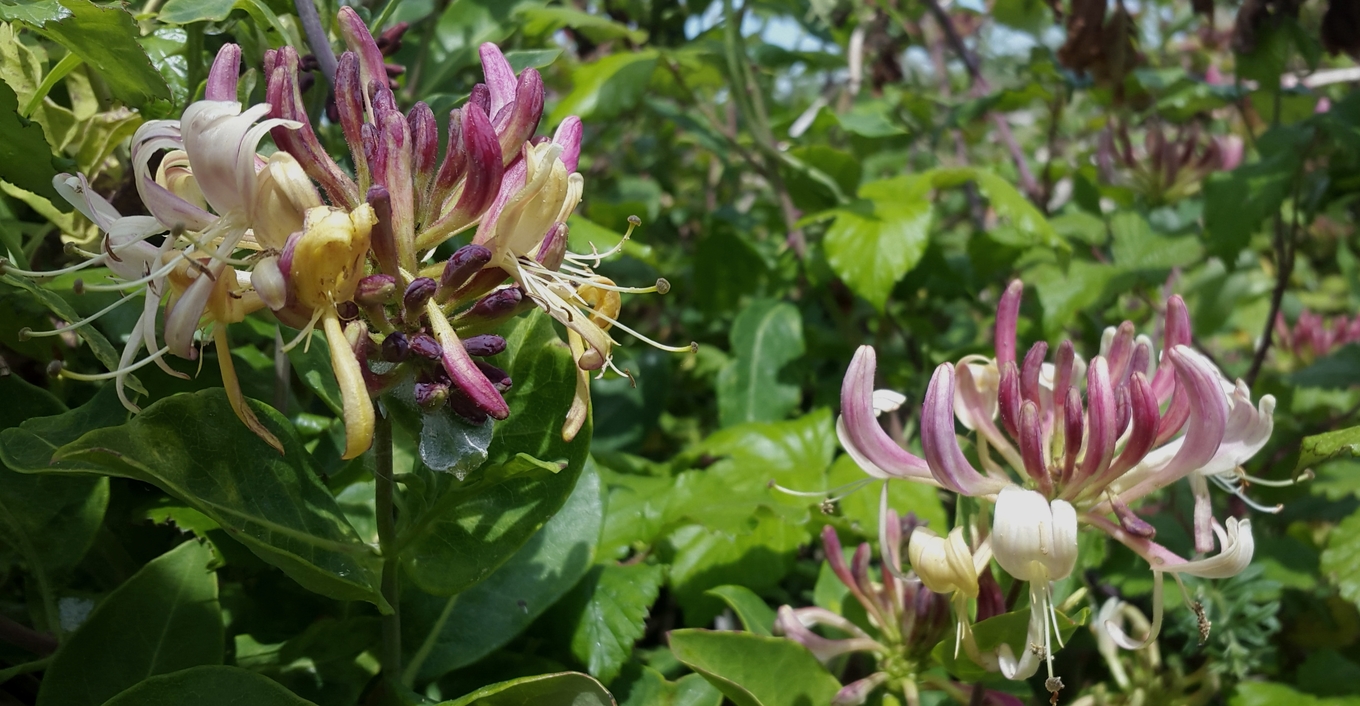 Honeysuckle, so called because of the several-hundred-year-old tradition of sucking nectar from the flowers, has a honey-floral, perfumed flavour with bitter elements. With its intoxicating scent, delicate, curved blooms and pastel yellow and red-pink hues, common honeysuckle is surely one of the most elegant British wildflowers.

There are over 180 species of honeysuckle, and among those known to have edible blossoms are common (or European) honeysuckle and Japanese honeysuckle, as well as ornamental garden varieties of the two species. In summer, these highly fragrant honeysuckles can be found flowering in woodland, scrubland, hedges, gardens and along roadsides, winding around other shrubs and trees.

Both species are climbing plants with opposite pairs of untoothed, oval, pointed leaves and elongated, tubular, trumpet-shaped flowers with an upper and a lower ‘lip’.

Common honeysuckle (Lonicera periclymenum - pictured below), also known as woodbine for its twining habit, is often seen scrambling through British hedgerows and woodlands as a wild native, as well as in much of Europe. 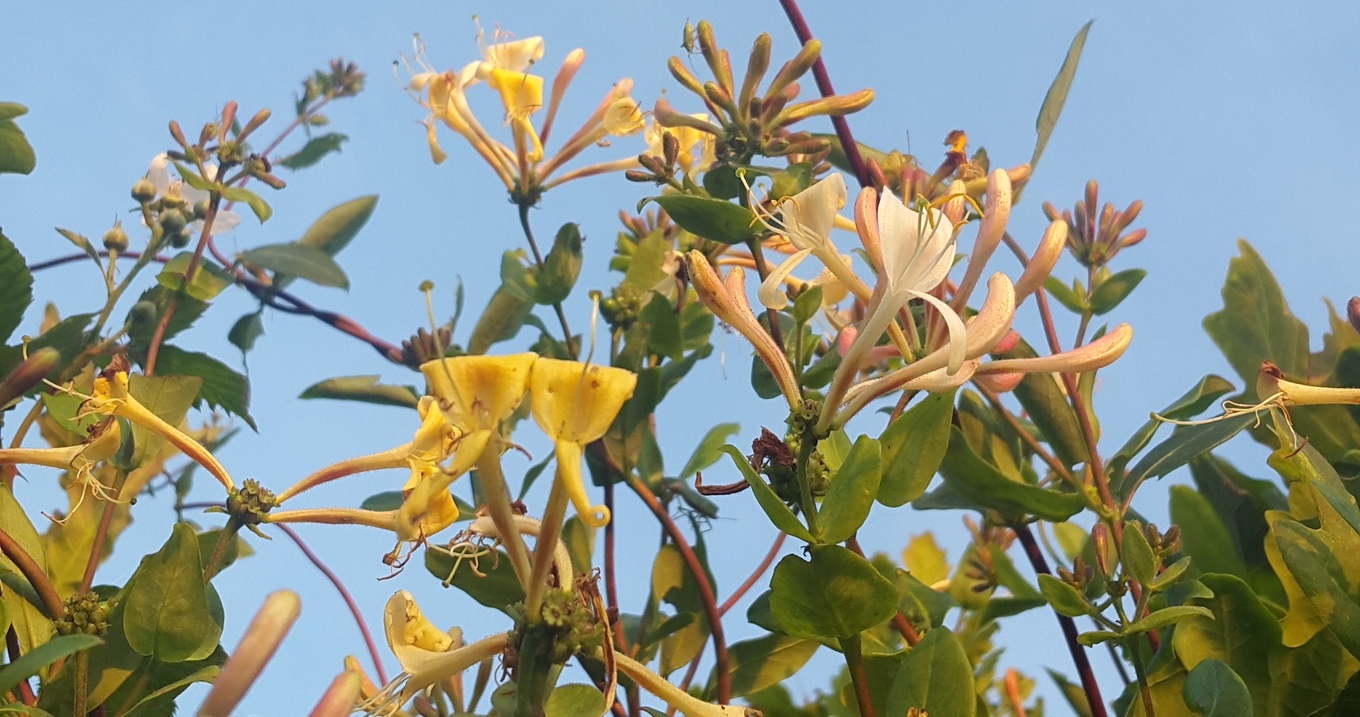 The clusters of stalkless flowers are arranged in whorls and are yellow-cream turning orange-yellow, often flushed pinkish-red. Their sweet, heady perfume has notes of jasmine, honey and vanilla. Clusters of red berries follow in autumn.

Japanese honeysuckle (Lonicera japonica), native to eastern Asia, has become naturalised and invasive in the US, Australia, and New Zealand, as well as parts of southern Britain. It can be destructive as it chokes native shrubs and trees. It has pairs of flowers which open white and become yellow, followed by small, black berries.

A traditional Korean wine uses honeysuckle blossoms, as do some British country wines and meads. The flowers are also used to flavour vodka, liqueurs and cider. Honeysuckle adds delicate floral notes to Bloom London Dry. It is also one of the botanicals in Damrak Gin from Amsterdam, and the unconventional Monkey 47 Gin.

Honeysuckle pairs well with citrus, yuzu, mint, sage, peaches, strawberries, and other florals such as elderflower and rose. Despite its honeyed notes, honeysuckle syrup is not always a suitable substitute for honey syrup in cocktails, being much more floral in flavour. Try honeysuckle syrup with fizz, in a Spritzer, a Collins, instead of honey in a Bee’s Knees cocktail, with gin (e.g. the Suck My Honey cocktail, recipe below) or tequila, whisky, brandy or rum.

You don’t need a great deal of the fragranced trumpets to capture their honeyed, floral flavour. Pick flowers that have recently opened and look fresh, making sure they’re also clean as the nectar shouldn’t be washed off. Honeysuckle flowers are more strongly scented at night to attract pollinating moths, so evening or very early morning is a good time to pick them.

Unless you’re gathering the invasive type, make sure you harvest lightly, just taking a little from each patch and leaving some flowers for bees and moths. Pick open trumpets, leaving unopened flowers to bloom, and leaving the stalk and flower base behind for berries to form, as birds and other wildlife feed on them.

Placing the blossoms outdoors on a tray for half an hour or so may encourage any tiny beetles and other insects inside the tubes to escape. Remove any stems - discarding the tiny green part (calyx) at the base of each trumpet is not essential, but may reduce bitterness and improve flavour.

Fresh honeysuckle flowers can be used as an attractive garnish, or they can be dried for later use. As with many other edible flowers, the petals can be infused in spirits as a flavouring. I infuse a small handful in a small bottle of vodka for up to 24 hours. Then fine strain and decant into a clean bottle. Add sugar or syrup to taste if you like, depending on how you plan to use the infusion. 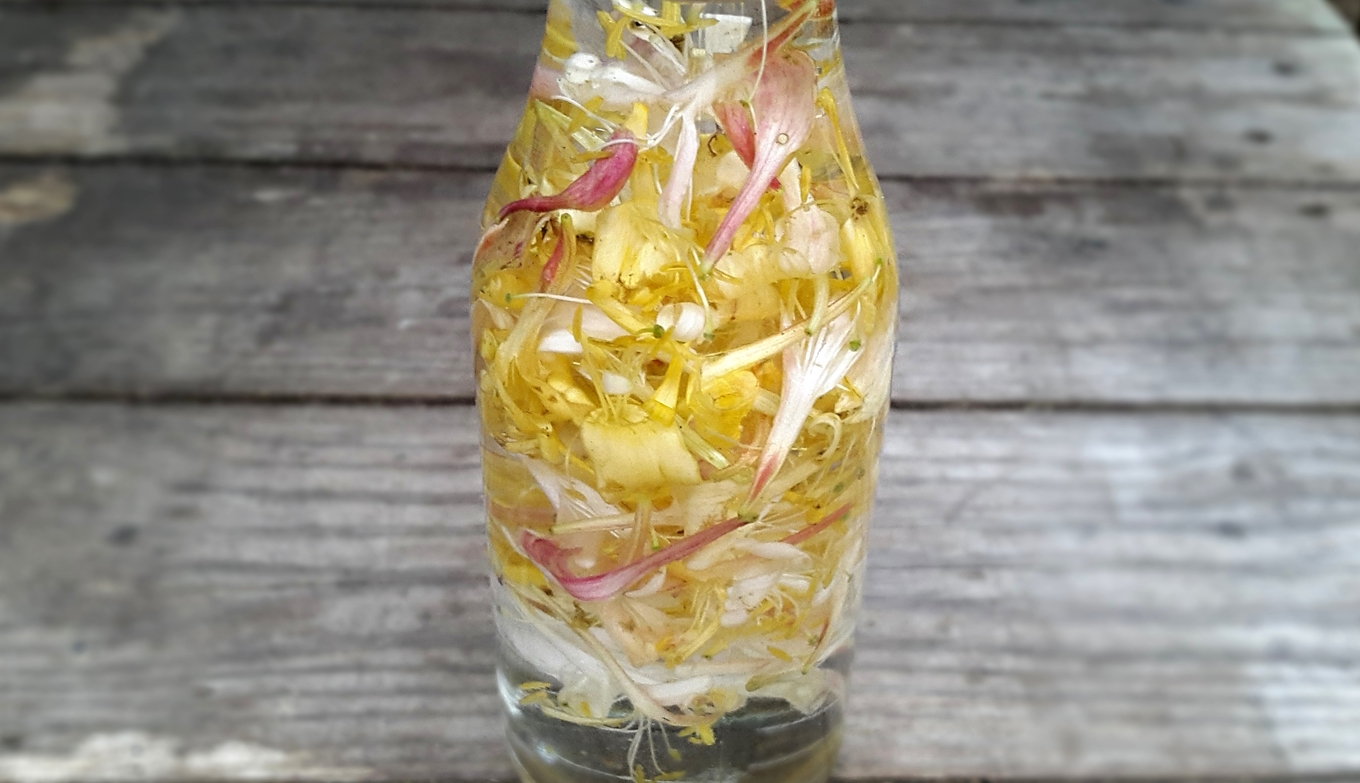 Honeysuckle's bitterness in spirits lends itself to cocktail bitters. Try infusing honeysuckle blossoms in vodka for a week with herbs and other florals or spices, and other bittering agents such as roots, leaves or tree bark.

For syrup, steep a few small handfuls of blooms in enough just-boiled water to cover them. Infuse covered for 24 hours, refrigerating once cooled. Strain the liquid through muslin into a measuring jug, and add to a saucepan with an equal quantity of sugar. Bring to the boil slowly, stirring to dissolve the sugar. Simmer for 3 to 5 minutes, then add 2 teaspoons of strained lemon juice for each 500ml. Stir, then funnel the syrup into sterilised glass bottles and seal. Or let it cool and transfer to sterilised bottles for freezing, leaving some headspace. Refrigerate once opened.

For a lower sugar cocktail ingredient, try fresh or dried honeysuckle petals as a tisane, using just-boiled water and steeping for at least 5 minutes until a strong enough flavour develops, before straining and chilling. Or make a cold-brew tea, steeped overnight in the fridge then strained.

Be careful not to use flowers that may have been sprayed with chemicals, or from a busy roadside. Note that some people may be sensitive to honeysuckle and can develop dermatitis from handling it. 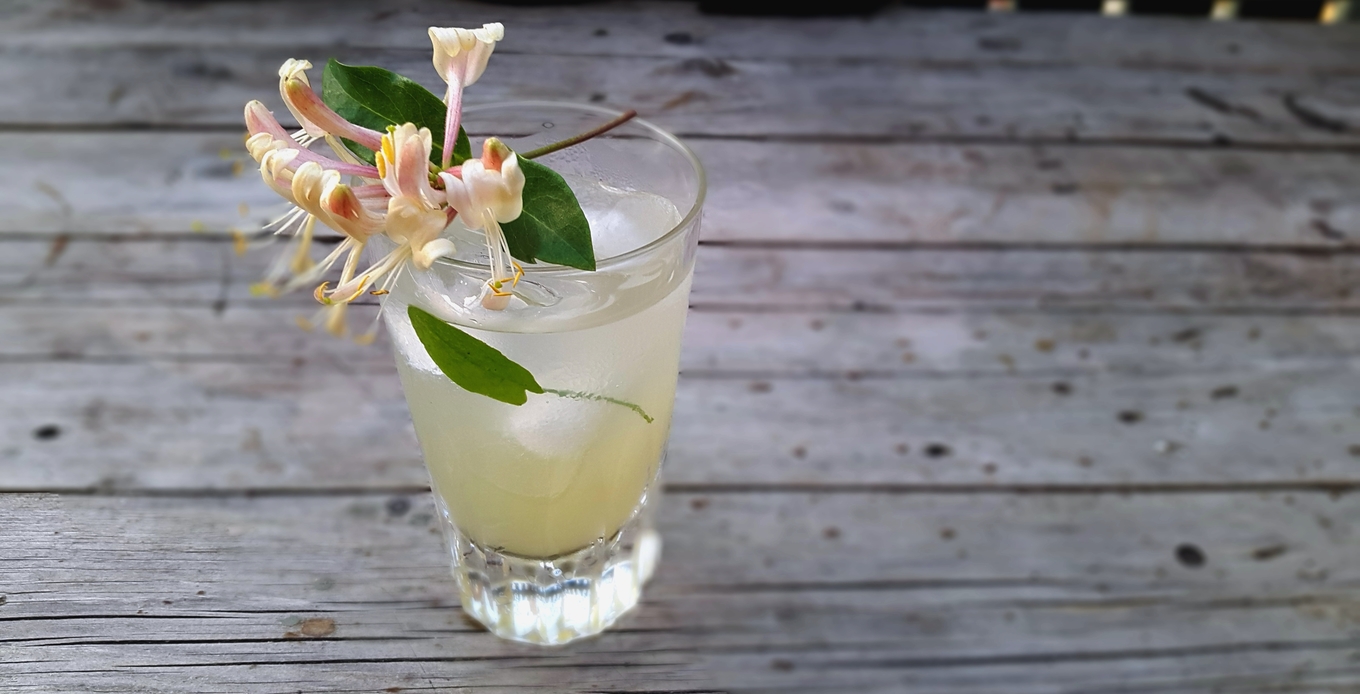 For this spin on a Gin Rickey cocktail, I used Ginderella, a herbaceous gin from Belgium flavoured with freshly foraged herbs, but you could use a light, floral gin such as Bloom London Dry.

Muddle the sorrel with the gin and syrup, add the lime juice and orange flower water, and shake with ice. Double strain into an ice-filled glass and top with soda. Garnish with a honeysuckle bloom and sorrel leaf. 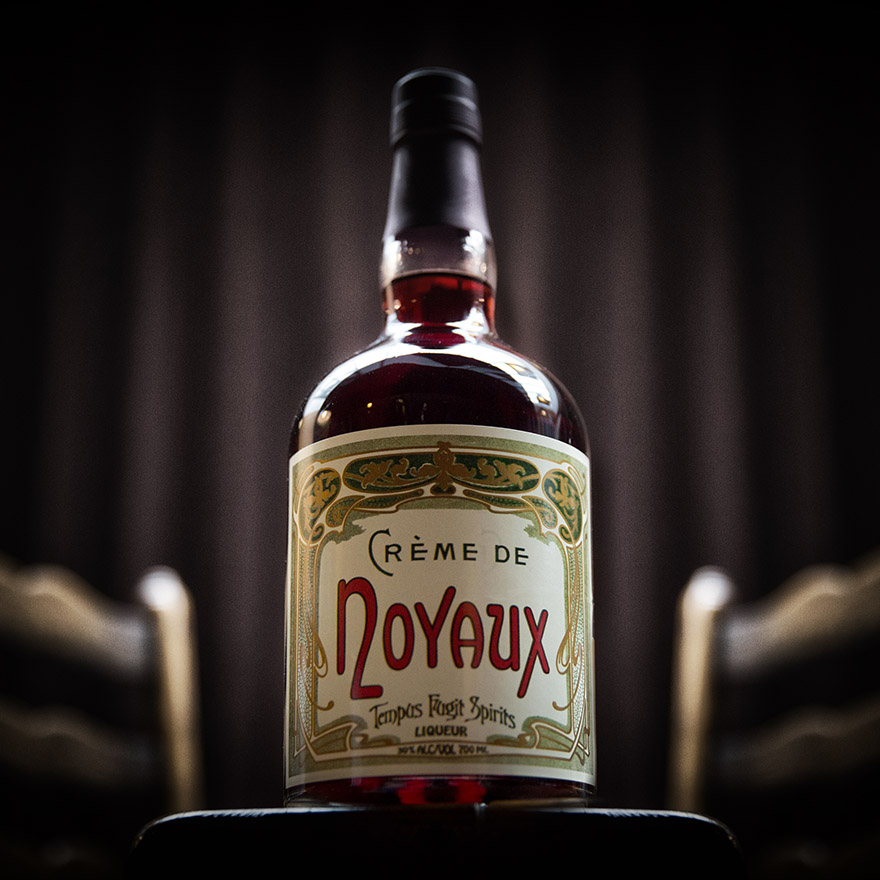