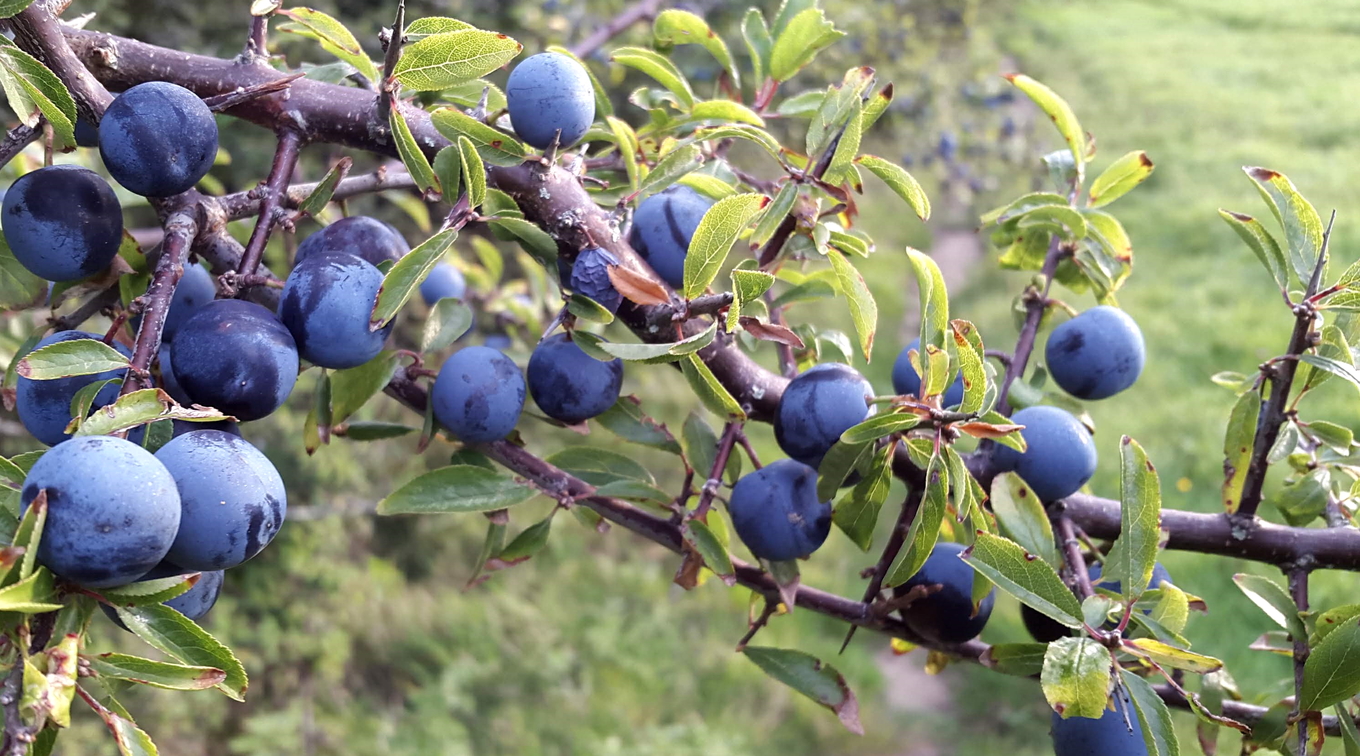 Most folk in the British Isles know of hedgerow favourite, sloe gin, even if they've never picked the mouth-puckering little fruits. There's more to sloes than just gin liqueur however - make the most of their intense, plummy flavour in other ways too.

The blackthorn plant bears tiny, round plum-like fruit known as sloes. It is native to Europe and Western Asia and has naturalised widely elsewhere. Blackthorn is one of the most abundant hedging plants in the British countryside, it also grows in woodland edges, scrubland and on cliff slopes.

Sloes are thought to be the wild ancestors of domesticated plum and damson varieties. Fresh sloes are high in tannins, making them very astringent with a dry mouthfeel, they're also intensely sour, containing several acids including malic and citric.

Collections of sloe stones have been found at Stone Age sites - it's possible the ripe flesh was pulverised and dried into a kind of fruit leather to preserve it and make it palatable.

It's traditional to use sloes to make the ruby-coloured liqueur that is sloe gin, or other indigenous sloe liqueurs from across Europe. As a fruity alternative in cocktails, try Blossoms Sloe Syrup, or make your own using my recipe below. Sloes are occasionally used as a gin (spirit) botanical and in bitters. The fruit can be fermented into country wines, and is sometimes an ingredient of ales or porters. 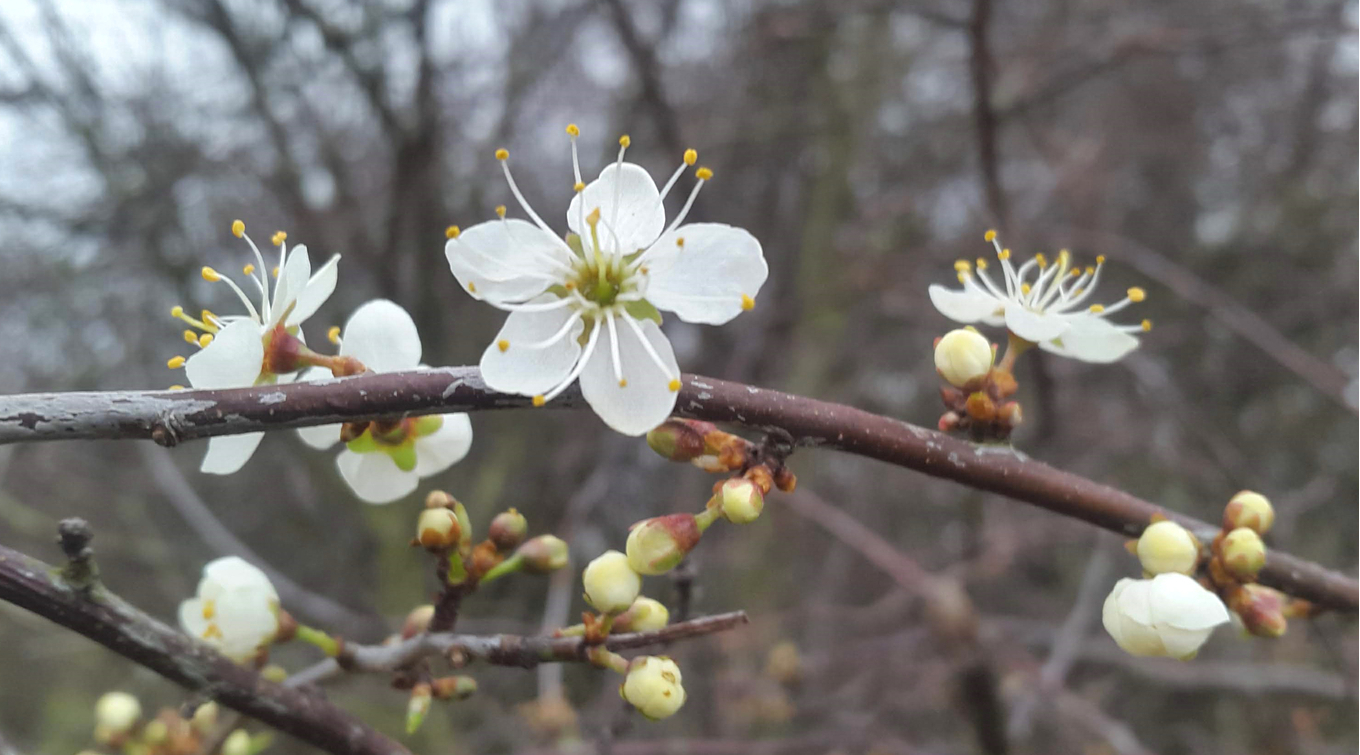 Blackthorn is a small, deciduous tree or shrub, usually growing up to 4 metres tall. It has dark brown bark and stiff, dense branches with long, sharp thorns. The white, five-petalled flowers (pictured above) are up to 1.5 cm across, blooming in March, shortly before the oval, pointed, matt leaves appear, which are up to 5cm long with finely serrated edges.

Blackthorn is an important plant for wildlife. Its branches give shelter for nests, its spring flowers provide nectar, and the leaves are a food plant for many moths and butterflies.

The fruit ripens from green to purple-black from late August and through autumn, developing a whitish-blue yeast bloom. The almost-spherical fruits are about a centimetre across with yellow-green flesh. They contain a large stone with a single seed inside.

Damsons are a similar fruit, more oval than sloes, and with longer stalks. Black bullace is another old English fruit, possibly also descended from the sloe. Both damsons (pictured below) and bullaces are larger fruit than sloes, growing on trees or bushes without thorns, and with wider, more rounded, leaves than blackthorn. 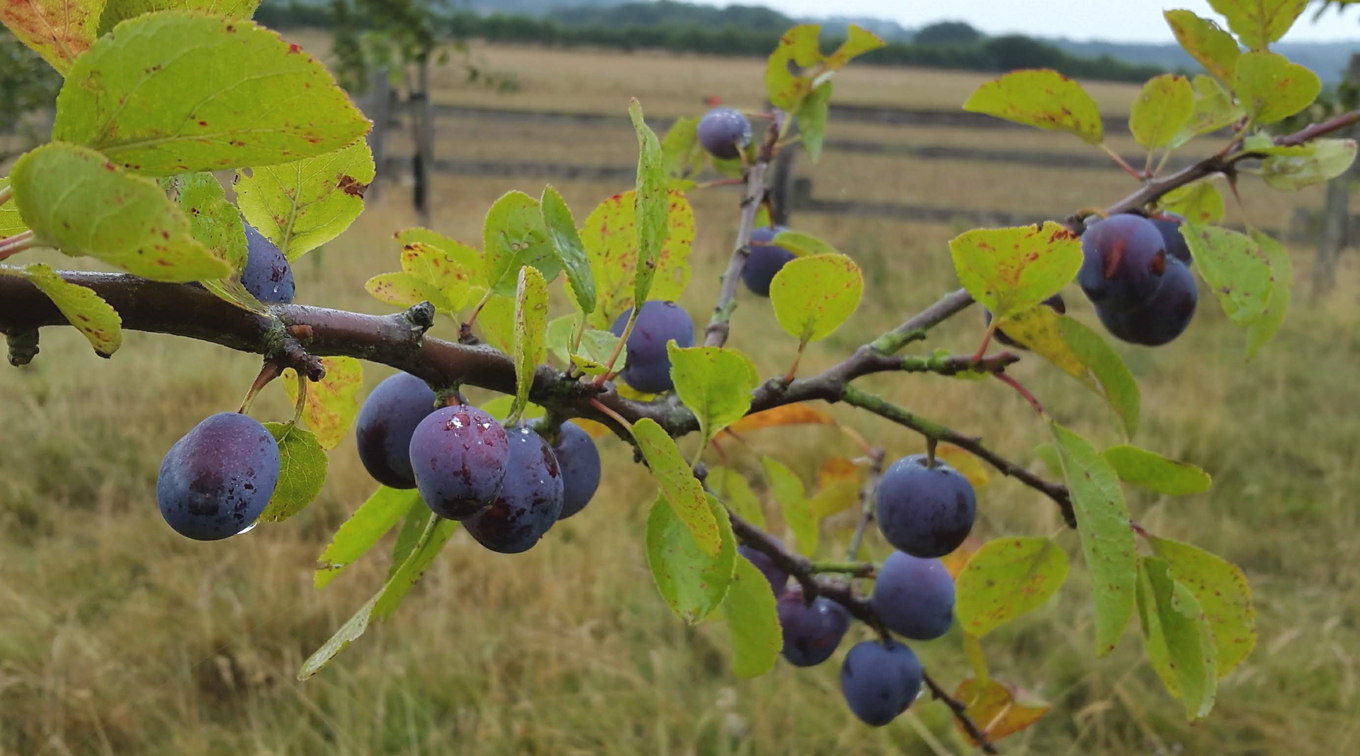 The two fruits are sharper than ripe plums, but sweeter than sloes and nowhere near as dry and tannic. Both can hybridise with blackthorn, which can make identification tricky, but all these richly-flavoured fruits are interchangeable when used in drinks.

During the 'Enclosures' in Britain, when rural areas were divided up into fields, blackthorn was often planted as stock-proof hedging in the 18th and 19th centuries. It was around this time that sloes started to be steeped in gin. John Wright notes that sloe gin was described in a 1717 poem as made at home from 'sugar, sloes and grocer's trash'.

Despite its chequered reputation, sweet-tart, fruity sloe gin continues to be a hipflask favourite, and City of London Sloe Gin and Rutte Sloe Gin are good examples. Alongside a revival in commercial sloe gins, and the creation of new cocktails, local sloe gin-making competitions are undergoing a resurgence in pubs from Sussex to Scotland – recipes are taken seriously and foraging spots closely-guarded.

Try sloe gin in cocktails such as a San Francisco (Café Royale) pictured below, a Slow Negroni, or the Modern Cocktail with whisky and a dash of absinthe. 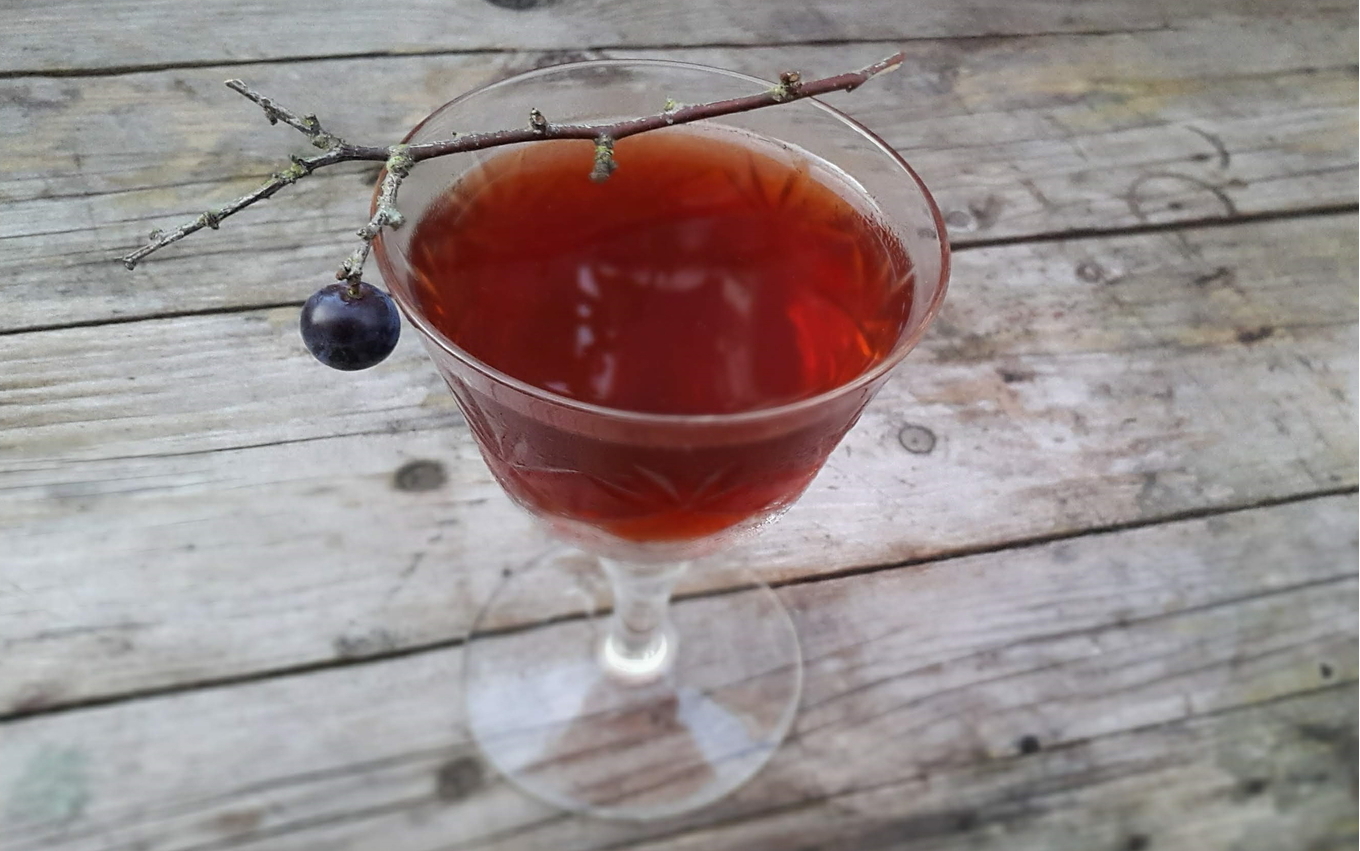 To make Sloe Gin it's traditional to prick each sloe with a needle before infusing, but it's not necessary, especially if you freeze them first. Freezing helps break down the tannins, increase sugar levels, soften the fruit and break the skin. It negates the need to wait until after the first frost to pick them, by which time the sloes may have shrivelled or dropped from their branches.

Contrary to many syrupy, sloe gin recipes, there's no need to add sugar at the start of the process. Add simple syrup or sugar to taste after infusing as you may not need as much as many recipes call for. I suggest leaving your sloes to infuse for a minimum of three months - and up to six for the liqueur to develop more complexity as the stones release their almond notes.

To augment the nutty tones, fellow forager Mark Williams recommends sweetening sloe gin with syrup made with blackthorn blossom in early spring, which has a subtle almond taste. Once filtered, sweetened and bottled, leave your sloe gin to mature for a few more months, or several years for a truly ambrosial liqueur. 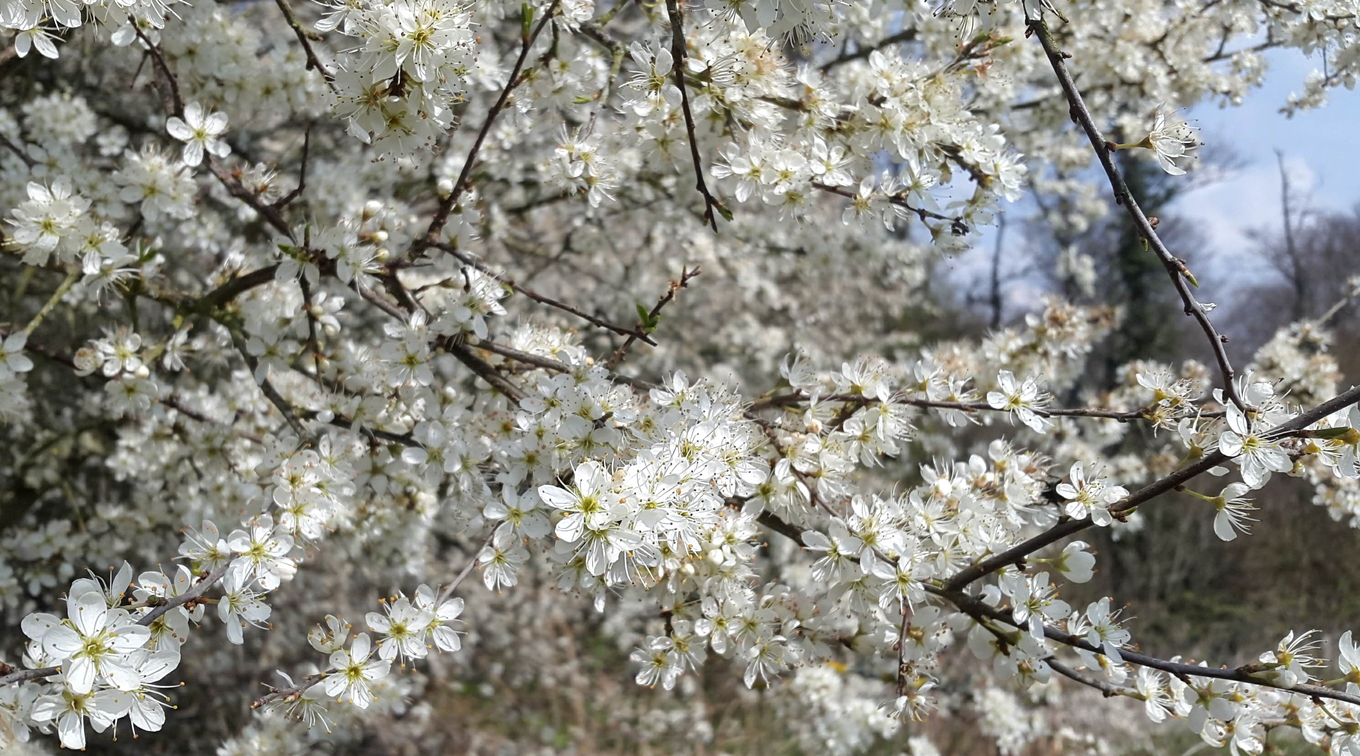 Try infusing sloes in rum, brandy, Irish whiskey, or vodka for a cleaner flavour. The fruit complements the warm spiciness of anise-flavoured liquors like pastis or ouzo. Mark suggests infusing sloes into home-made vermouths and amaros too.

Gin-steeped sloes are traditionally added to a still cider for around a month to make 'slider', a delicious sloe-flavoured cider. Or infuse them in port for three months to impart their plum and almond notes.

Hedgerows are good places to look for sloes from September to November. Blackthorn does not produce fruit on very new growth, so a hedge cut every year will not be as productive as one pruned less often.

• When ripe, sloes are plump and dark-skinned and no traces of green. The fruits should have a little give in them when squeezed, like small ripe plums, rather than being rock-hard to the touch. Wash the fruit and remove any stems and leaves.
• Blackthorn spines are well known for causing infections and tissue reactions - sturdy gardening gloves are a good idea. Clean any scratches with antiseptic, and if they become badly inflamed, seek medical advice.
• Avoid picking along really busy roadsides, or around fields which may have been sprayed with chemicals. 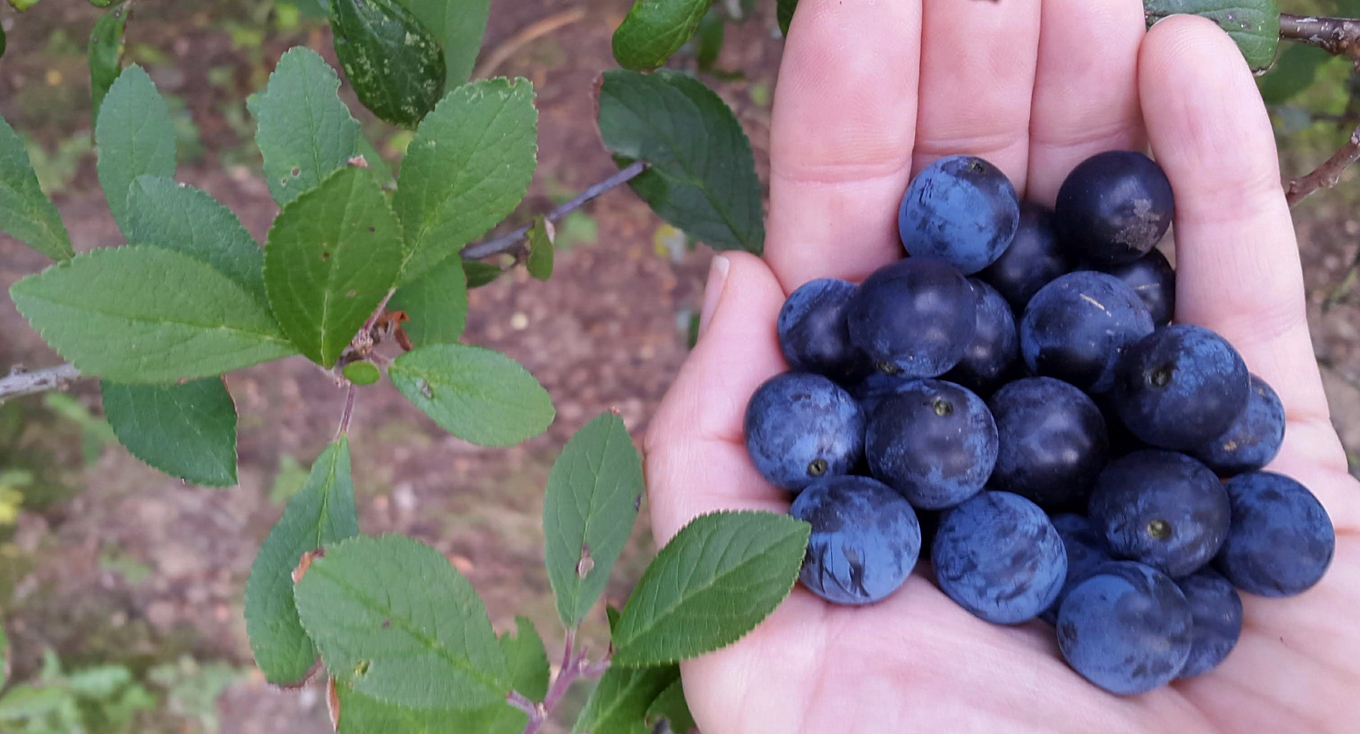 • Sloes (pictured above) freeze well which allows harvesting in batches until you have enough to use.
• Be very careful not to confuse sloes with toxic black fruits, such as cherry laurel or black nightshade (both poisonous when unripe), tutsan, herb paris or the highly poisonous deadly nightshade.
• Like plum, apricot and cherry pits, raw sloe kernels must not be eaten as they produce traces of cyanide which is toxic in sufficient doses. Follow tried and tested times and quantities for infusions, and avoid excessive intake.

To make sloe and apple syrup for cocktails or mulled wine:
1. Bring 500g sloes, 500g chopped apples and 750ml water to the boil.
2. Simmer until the fruit is very soft.
3. Strain through muslin, leaving it to drip for several hours.
4. Measure the liquid into a clean pan with the strained juice of a lemon. For every 100ml of liquid add 90g of white sugar.
5. Bring gently to the boil, stirring to dissolve the sugar. Boil for a couple of minutes, skimming off any scum.
6. Funnel hot syrup into sterilised glass bottles and seal.
7. Once opened, keep refrigerated.