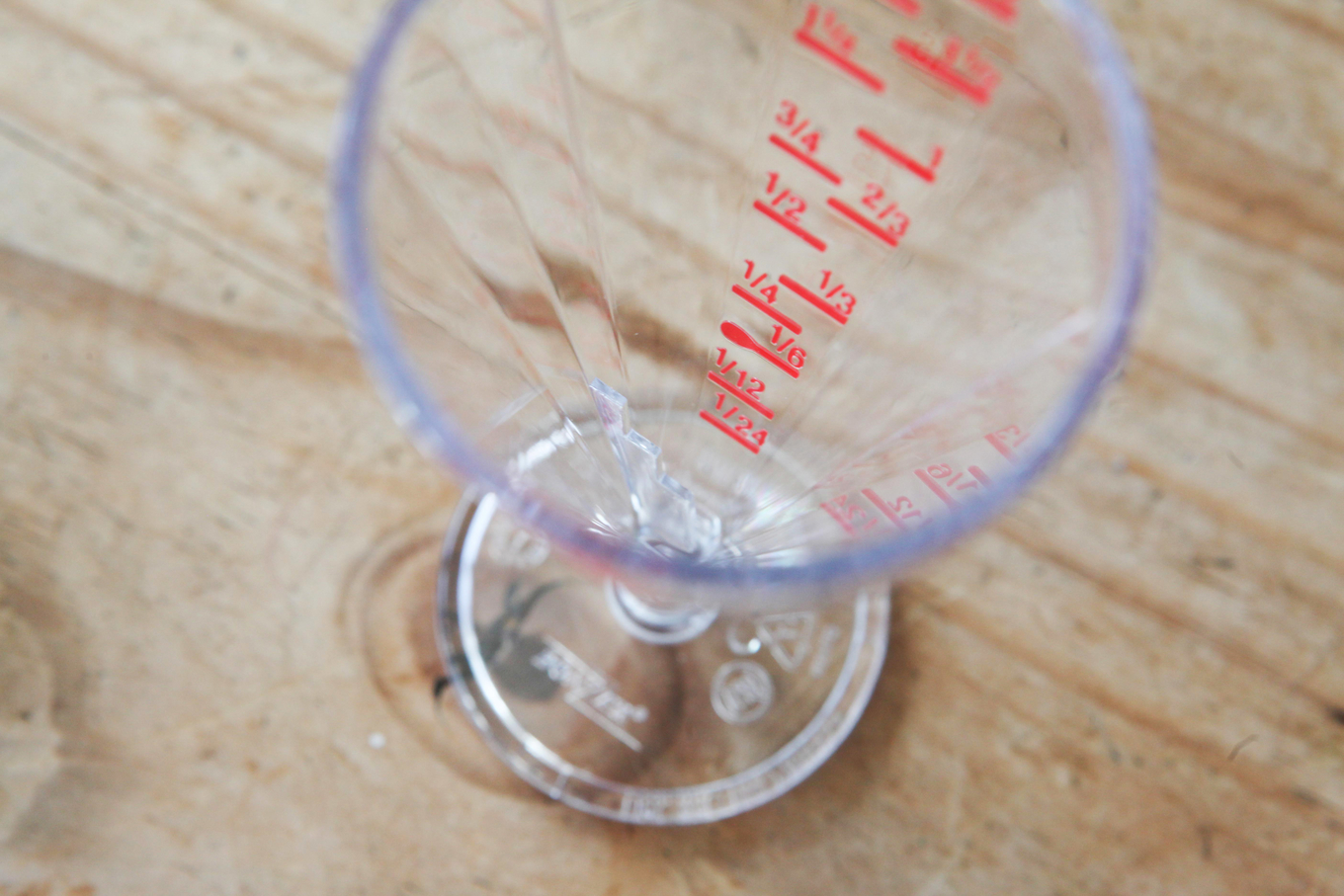 Originally, cocktail recipes were in "gill", "quart" and "pony" measures, then fluid ounces (oz) became pretty much the standard global cocktail measure and remain the norm in North America. However, in the UK, Europe, Asia and much of the rest of the world, the ease and accuracy of measuring in millilitres (ml) has led to ounces becoming obsolete.

When fine-tuning the optimum proportion of one ingredient to another, while also pursuing a perfect fill level in the appropriate glass (wash-line), working in round ounces (30ml, or even half (15ml), quarter (7.5ml) or third-of-an-ounce (10ml) units is sometimes too restrictive. Working in millilitres makes measuring in smaller increments of 5ml (approx. 1/6oz) or even 2.5ml (approx. 1/12oz) easier to measure.

We round up 30ml to equal to 1oz (its actually 29.5735296ml) as this enables cocktail recipes in ounces to easily convert to millilitres. Conversely, some common measurements in ml aren't so easy to comprehend or measure in ounces. e.g. the standard legal UK spirits measure of 25ml equals an unfriendly five-sixths of an ounce, which if you're measuring in ounces is best measured in two goes:

This is further complicated by those used to working with 25ml as the standard measure also thinking in fractions of that measure. Hence, 12.5ml is a common measure in European recipes but this converts to an unfathomable two-fifths of an ounce from an American perspective.

The following table shows commonly used cocktail measures and their conversion from ml to oz. The green to red colour scheme indicates which measures convert easily and those which are more awkward in ounces.

What's a dash, and how many drops in a dash?

A drop dispensed from the pipette is the smallest bartending measure and, after patiently dripping, counting, and measuring, I've found approx. 41 drops equal 1ml. How many drops equals a dash depends on what size you consider a dash to be, and that largely depends on your dasher – the same 1ml measure can be anything from 3 to 6 dashes (with Japanese bitters bottle dashers tending towards 6 dashes).

In the pursuit of consistency and accuracy I prefer to use bitters bottles with dropper pipettes (e.g. Bob's Bitters) or replace the dashers on brands of bitters bottles such as Angostura and Peychaud's with DashDarts screwtops. I then work to:
12 drops = 1 dash
4 dashes = 1.25ml

In our recipes, a "spoon" is a volumetric measure of 5ml (1/6oz) and stems from bartenders traditionally measuring this volume with a barspoon. Indeed, Bonzer, one of the oldest barspoon brands, continue to design the bowls of their spoons to be exactly 5ml. Teaspoons are more variable in size, with bowl capacities ranging from 2.5 to 7.3ml but an average-sized teaspoon is approximately 5ml.

Liquid - You can measure 5ml (1/6oz) liquid using a barspoon or teaspoon but our Easy Jigger is more accurate.

Sugar - Once again, a barspoon will surface to measure a spoon of sugar (the amount that sits on the spoon after knocking rather than heaped) but a levelled chef's 5ml (1/6oz) stainless steel measuring spoons is preferable. I use a pestle and mortar to turn white caster sugar into powdered sugar with a 5ml chef's measuring spoon and I leave this in the mortar, only briefly swapped for the pestle when topping up with fresh sugar. When not in use, I cover by sitting a shallow bowl across the top of the mortar with the pestle housed in the bowl.

Honey – Due to being easier to measure and use, I'm gradually moving our recipes away from using raw honey to honey syrup. However, when measuring spoons of honey, beware of honey remaining on the spoon from the previous measure affecting the accuracy of the next spoonful.

I'm sent recipes in ml and ounces with measured volumes (other than dashes) often as small as 1.25ml (1/24 oz or quarter a teaspoon). Over years of following and writing recipes, I dreamt of having an accurate jigger with graduations in both millilitres and ounces that started from 1.25ml / 1/24oz and ran all the way through the popular volumes to 60ml and 2oz. After a eureka moment with a plastic funnel, I told my friends at Bonzer about my idea and they produced what we call the Easy Jigger. I believe this is both the most accurate, easiest, quickest, and the most hygienic cocktail measure available. 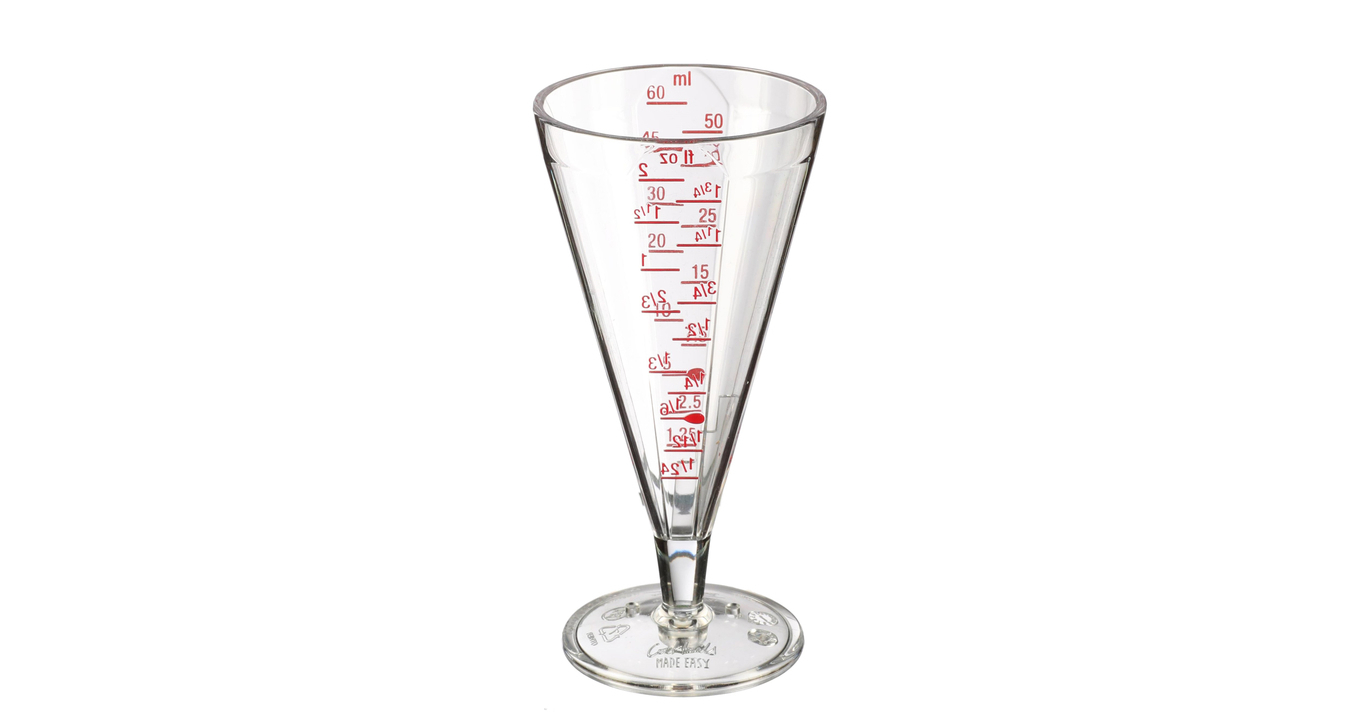 A shot is a measure of whatever size you want it to be but ideally should be somewhere between a metric 25ml or one US fluid ounce measure. Whatever you use as your shot measure, be that a small shot glass, a medicine measure, or even a bucket, that same measure must be used for all the ingredients in a recipe so that the proportions of one ingredient to another end up as the recipe intends. Ideally, your chosen measure should have straight sides to enable you to accurately judge fractions of a shot.

What size scoop to use for crushed ice

A 6oz (177ml) or 7oz (207mm) ice scoop is perfect for crushed ice. I favour a clear Polycarbonate plastic scoop as this doesn't impact the ice by conducting heat (unlike a metal scoop). I also prefer one with drain slots. The scoop I use has a bowl with internal measures: 130mm long, 73mm wide (at its widest point), and 42mm deep (at the deepest point).

... comment(s) for Measures and measuring