A drinking club with a motorcycle problem 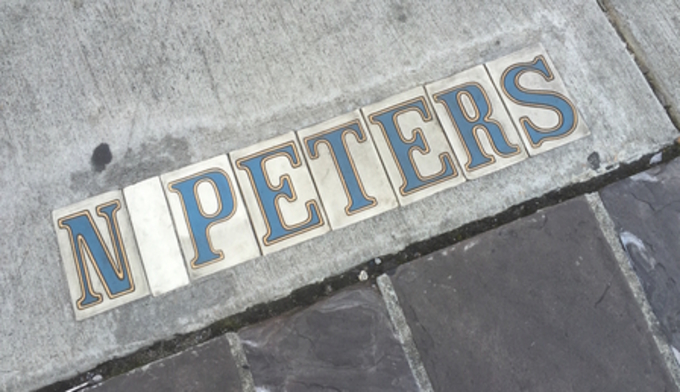 New Orleans has always been a magnet for cocktail connoisseurs and chroniclers, mixologists and alcohologists. At Beachbum Berry's Latitude 29, my bar-restaurant on Peters Street in the city's French Quarter, I've had the privilege of hosting quite a few of them. Some have even become regulars.

This is the fourth installment of The Peters Street Regulars for Difford's Guide, in which I profile those regulars who are likely to interest you as much as they interest me. 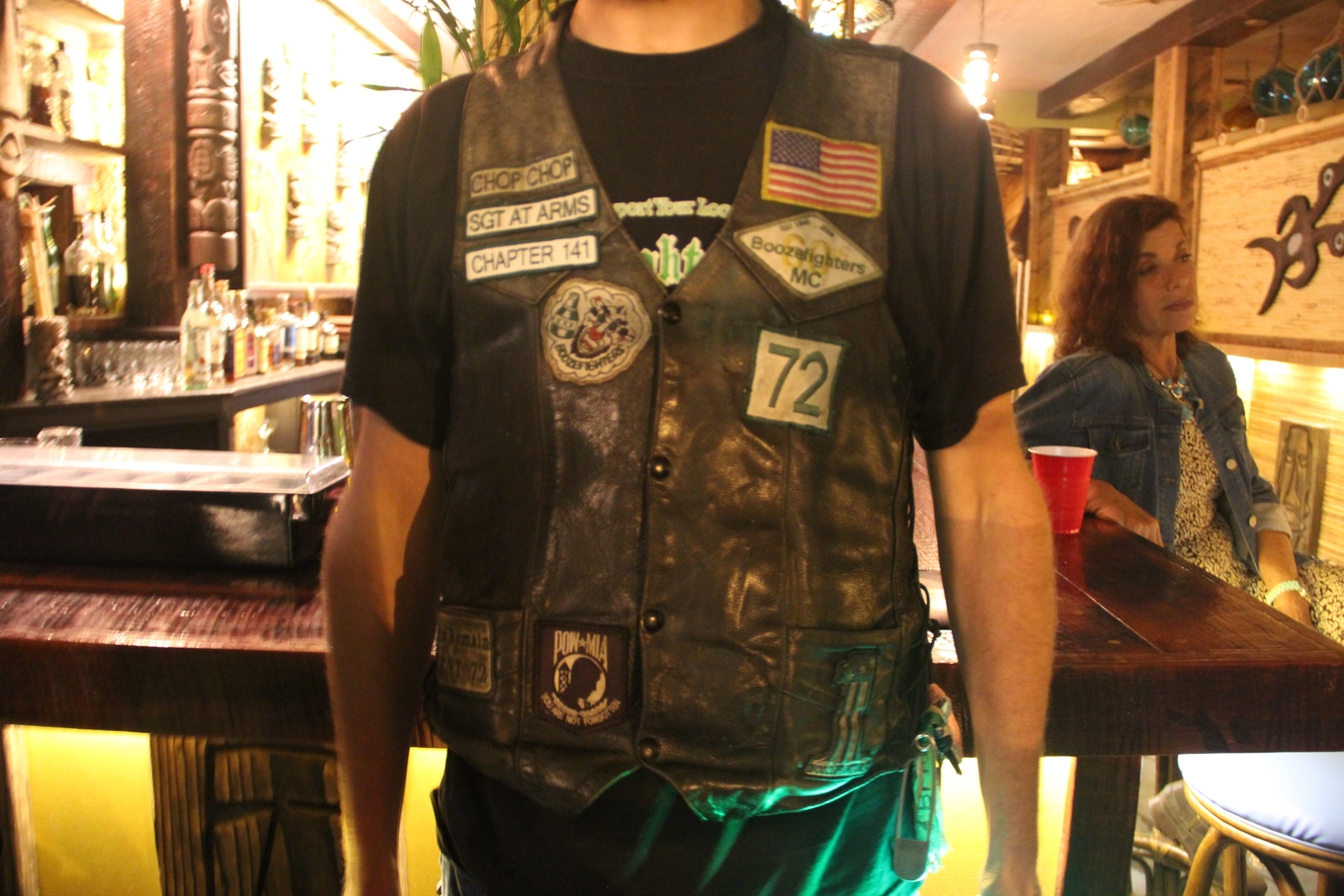 Shortly after Latitude 29 first opened, our lead server pulled me out of the prep room. "Mr. Mayhem and Mr. Dragon would like a word," he said tremulously. "Table 204." Normally when leather-jacketed, head-tattooed bikers drop into your establishment, your first step is to check that your insurance is paid up. But when Mayhem and Dragon told me which club they belonged to, I couldn't have been happier to host them. For they wore the patch of the Boozefighters, a self-described "drinking club with a motorcycle problem" whose long and legendary past is entwined with the battle for Iwo Jima, the movie that made Marlon Brando a screen icon, and the copious consumption of vintage cognac.

On the eve of the club's 70th anniversary, I asked Dragon to school me on Boozefighter history, philosophy, and drinkery. Mayhem had recently moved on to another storied motorcycle club (the Banshees, formed in New Orleans in 1966). Dragon began at the beginning, with the story of Wino Willie. 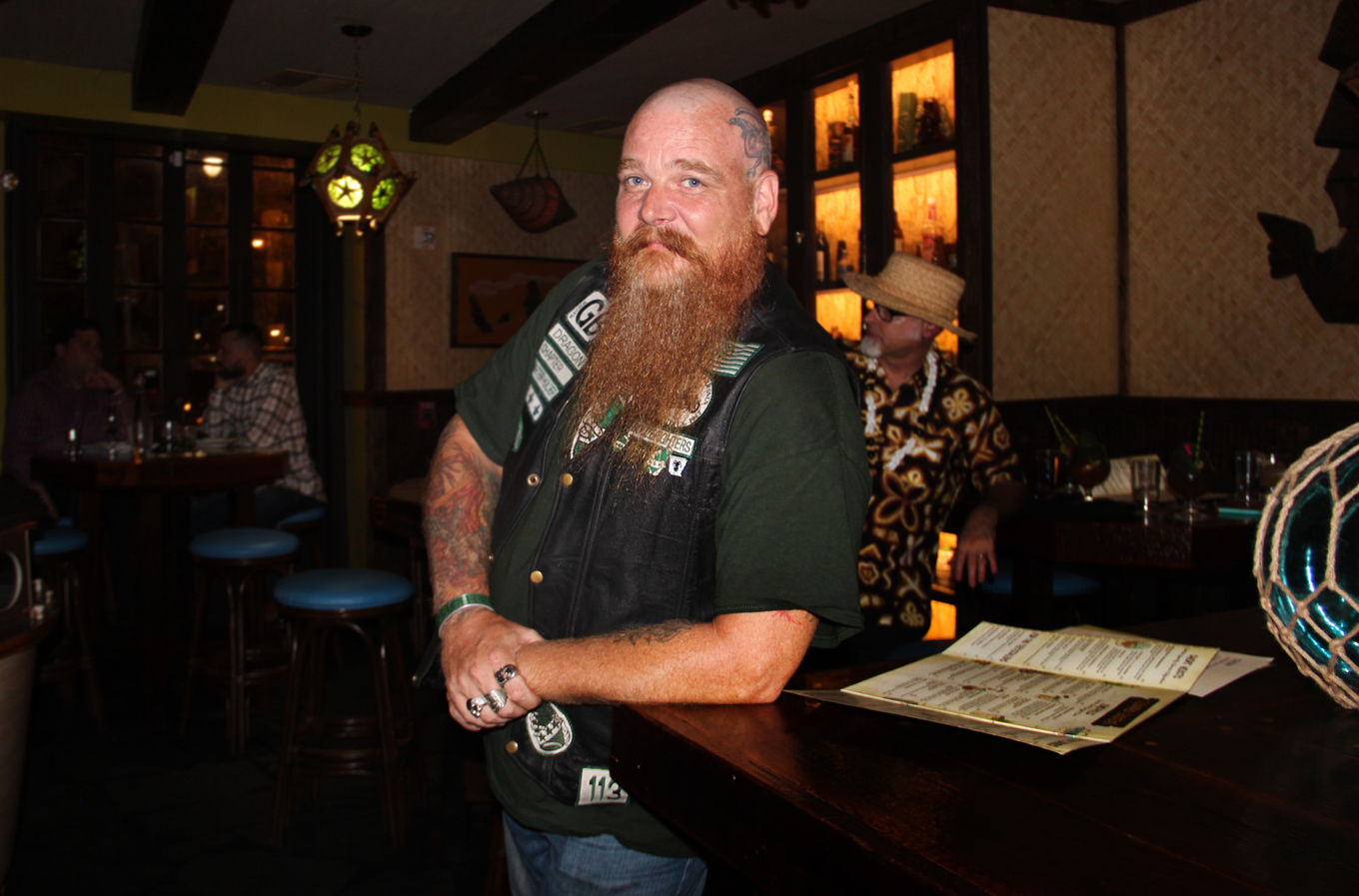 In 1943 journalist Alan Moorehead wrote of homeward-bound WWII veterans, "These men were soaked in war. They were grown old to war in a few weeks, and all the normal uses of peace and the ambitions of peace were entirely drained out of them." William Clyde Forkner, Jr., certainly fit this bill. Born in the Central California town of Fresno in 1920, he got the nickname "Wino" at age seven, when he began sneaking samples from the vineyards along Route 99. During the Depression he eked out a living unloading freight trains, spending what disposable income he had drinking beer and racing bikes with fellow members of the 13 Rebels motorcycle club. Biker gangs were a lot more genteel back then: it wasn't about being an outlaw, it was about having a picnic after friendly competition with other clubs in races sanctioned by the American Motorcyclist Association, whose Gypsy Tour rallies were held in sleepy, conservative California farming towns like Hollister - which welcomed them with open arms.

All that changed after Pearl Harbor, when 22-year-old Wino Willie joined the Army Air Corps. He became a machine-gunner on a B-24 bomber nicknamed the Pacific Tramp; before one mission over Iwo Jima, his commanding officer pulled him off the crew so he could man another bomber in need of replacements. In the air above the island, Wino saw the Pacific Tramp explode into flaming pieces, his fellow crew-members atomized in front of his eyes.

Wino returned home to the 13 Rebels with a more urgent need for speed, not just to outrace his horrific war memories but because he jonesed for the adrenaline fix that warfare gave him. "It's harder to get that over here, when nobody's shooting at you," says Dragon. "Wino came back a little too wild for the Rebels. He broke into an AMA sanctioned race he wasn't supposed to be in, broke through the fence, jumped the track, raced the race and ended up fucking up his bike."

Wino married, raised three children and worked steadily as a truck driver, but never could fully re-adjust to civilian life. He self-medicated with what he called "red ink" (cheap chianti) and "hard soup" (cheap whiskey) with fellow alienated WWII vets at the All American Cafe in South Central Los Angeles, where one night in 1946 he decided to form his own motorcycle club. "Originally our name comes from an old drunk sitting at the bar," relates Dragon, "who said why don't y'all call yourselves the Boozefighters? Because you're always drinking and fighting." But mostly drinking, as exemplified by their jacket logo patch: not the usual helmeted skull or hog-riding Grim Reaper, but a stylized bottle of Hennessy 3-Star cognac - Wino's preferred pour when he had the pocket money.

Wino rode the Boozefighters into the national spotlight a year later, at the AMA's annual Gypsy Tour gathering in Hollister, whose town fathers had approved motorcycle racing down San Benito Street, the town's main drag, as they had every year for almost a decade. But 1947 would be different. On July Fourth over 4,000 bikers roared into Hollister for the rally, almost doubling the town's population overnight. Clubs whose ranks had swollen with other disaffected WWII vets, from the Market Street Commandos to the Pissed Off Bastards of Bloomington, made crowd control an unexpected challenge for the seven officers on Hollister's police force. They tried to keep order by making an example of the most conspicuous partiers - among them Wino Willie, whom they tossed in jail on charges of inciting a riot.

But there was no riot. The invaders, whom Hollister had in fact officially invited to come, committed little more than "low-level ruckus stuff, racing up and down the streets, breaking a few bottles," says Dragon. "Someone rode his bike into a bar; that kind of thing. But nobody knew how to handle it, and the next thing you know you've got Life magazine and all these newspapers talking about how these bikers took over an entire town. I don't know that the bikers would have seen it that way. It got totally blown out of proportion."

Hollywood took notice, and in 1954 made a movie out of the Hollister affair. The Boozefighters, whose mere 15 members were hardly the majority of the 1947 biker horde, nevertheless became a prime inspiration for The Wild One, with Wino serving as a production consultant and as the model for Lee Marvin's character, "Chino," the nemesis of a rival biker gang leader played by Marlon Brando. Brando's brooding, leather-clad Johnny Strabler became the first great symbol of alienated postwar American youth, perfectly encapsulating 1950s teen angst in the film's most famous line: When a local girl asks what he's rebelling against, Brando laconically replies, "Whaddya got?"

None of this sat well with Wino. He wasn't some punk nihilist, he was a decorated combat veteran with a straight job and a family. And he knew exactly what he was rebelling against. As he later told the Los Angeles Times, after Hollister he found himself in opposition to "the Establishment that I spent three years fighting for. You take off the khakis and the blue and put on some jeans and a leather jacket and immediately you become an asshole."

On the one hand, The Wild One turned bikers into pop culture icons; on the other, it branded them as a menace to society - to the point that British government censors banned the film in the UK for 14 years. "Wino, he got real fed up with that whole production," says Dragon. "At first he thought they were gonna listen to him. And, from what I understand anyway, he got very frustrated about halfway through when he realized they were portraying a story that never even happened. That's when he pulled out and said listen, we want nothing to do with this movie."

Ironically, the outlaw stigma that The Wild One affixed to motorcycle clubs boosted Boozefighter membership in the 1950s, as more and more dropouts from Eisenhower-era conformity swelled the ranks. Membership thinned down again in the late 1960s, when many aging bikers moved out of California, only to swell anew as history repeated itself and a new generation of shattered veterans came home. "There was another wave of clubs that started after the Viet Nam war," says Dragon. "All those guys had some version of what we now call PTSD." The Boozefighters became a refuge for vets who couldn't hack the straight world, but also couldn't embrace the genuine outlaw life of newly ascendant clubs like the Hell's Angels. 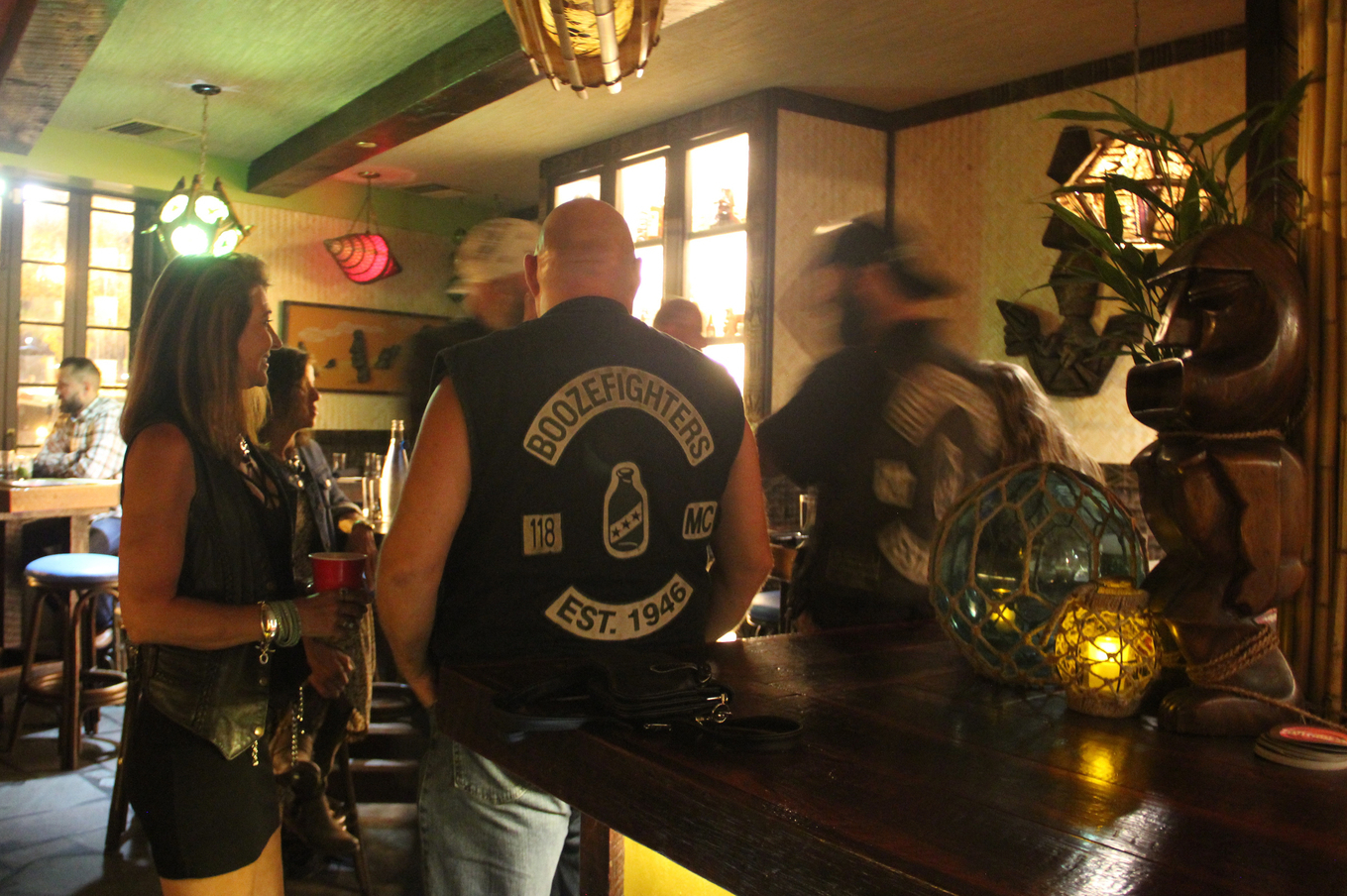 This was the same sweet spot that attracted Dragon to the Boozefighters. "I grew up around other clubs," he says. "I knew those guys, I hung out with those guys, but I never really wanted to be one of those guys." Wino had died in 1997, but his live-and-let-ride philosophy continued to hold sway with the Boozefighters. "He didn't run around poking everybody saying I'm gonna stir up a bunch of shit," says Dragon. "That's not to say he didn't drink, fight and have a good time - that's how we got our name. But he did that without feeling he had to control other people or tell them what to do. When I started looking for a club, I found out that's exactly what a Boozefighter was: a guy who doesn't run around causing problems, but stands up for what he believes in. At the same time it was also the kind of club where if you walked up and started to mess with one of those guys, you're gonna remember that you shouldn't mess with those guys."

Twenty years ago, Hollister celebrated the 1947 "riot" with a 50th anniversary party; Johnny's, a Hollister bar named after Brando's Wild One character, now features a nostalgic wall painting of Wino Willie and Brando grinning at each other. Over time the Boozefighters made their own peace with Hollister and The Wild One. "Now we embrace it more," says Dragon. The connection likely hasn't hurt the club's 21st-Century growth from a handful of hard-drinking discontents in South Central L.A. into a global organization headquartered in Dallas, with chapters in France, Italy, Germany, Belgium, Canada, Japan and the Philippines. 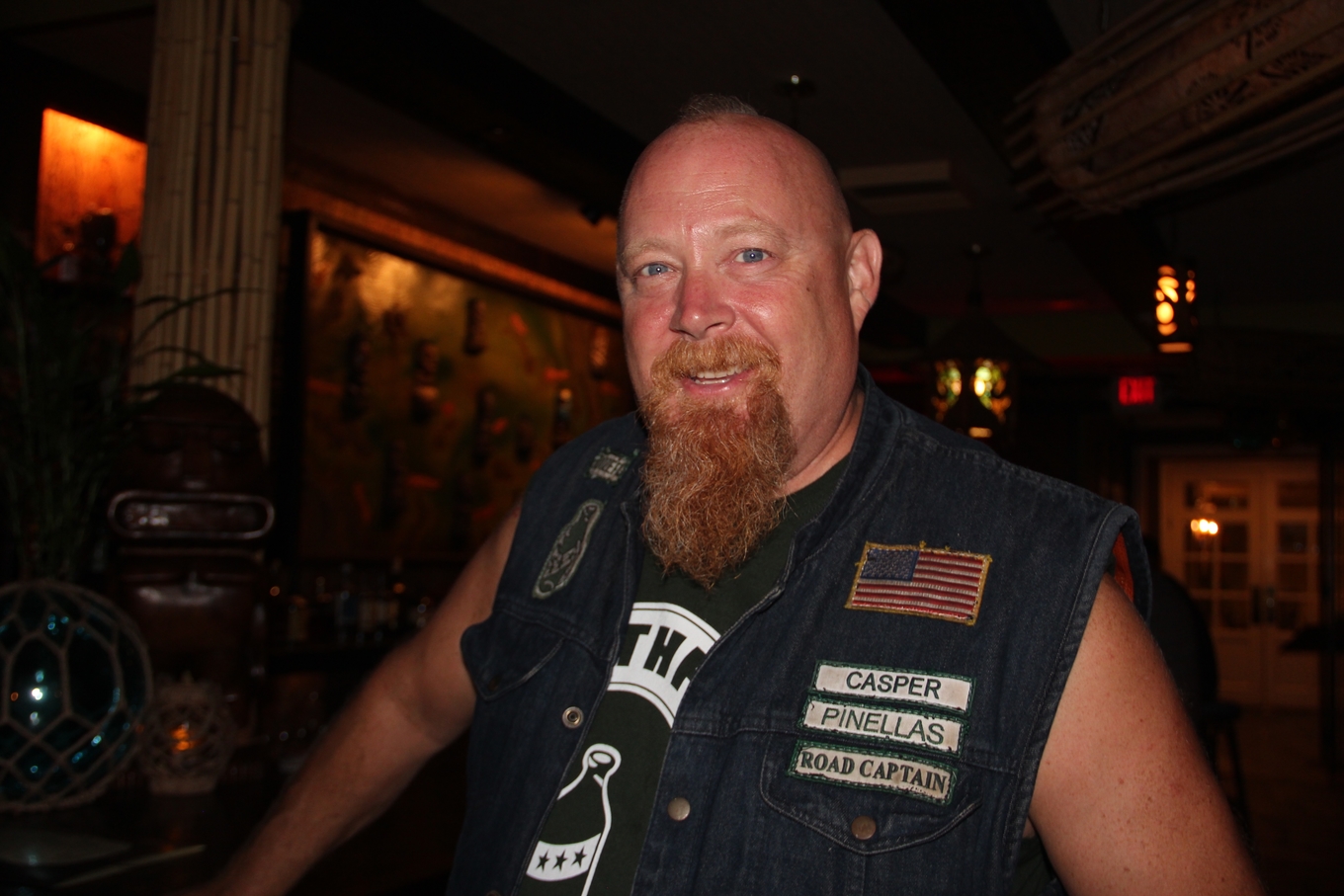 But if the Boozefighters have become something of an institution, they still haven't lost sight of their core values: "I like shooting good tequila and strong whiskey," says Dragon. "But listen, if you offer me a cocktail, I'm not gonna turn it down. I'm going to drink what you're drinking, and I'm going to like it. Whether it's beer, rum and coke, gin and tonic or hell, even this mai tai I'm drinking right now. And this one is damn good!"

Wino Willie would be proud.

... comment(s) for A drinking club with a motorcycle problem