Cobblers are shaken drinks served with straws in a goblet or Collins glass filled with crushed ice and decorated with fruit and a sprig or two of mint (preferably dusted with icing sugar). They are usually wine based but may also be spirits-based and are sweetened with sugar or sweet liqueur.

Classically, Cobblers contain little (or no citrus) with Jerry Thomas' 1862 Sherry Cobbler recipe stipulating "2 or 3 slices of orange" with no call for these to be muddled. However, modern variations often call for lemon (and sometimes lime) to either be added as juice or muddled - although there is an argument to say that 19th century oranges tended to be bitter while the varieties we mostly use today are sweet, hence the introduction of a little lemon tartness.

I personally prefer not to add lemon or lime to my Cobblers in the belief that it's the lack of citrus that sets Cobblers apart. The best examples of these use the tannin and acidity in wine to balance the drink rather than citrus. Our Sherry Cobbler recipe is an example of one without lemon juice and just 1/4oz/7.5ml orange juice so allowing sherry flavours to shine.

The usual sugar arguments prevail - syrup or caster, white or brown? I prefer white syrup (2:1), but fine caster/powdered sugar can make a fine drink, and I accept there's an argument for using darker sugar with darker sherries and more robust wines and spirits. The simple substitution of a liqueur or honey for some or all of the sweeter is a simple riff that can yield spectacular results.

Beware, all that crushed ice requires considerable sweetness to properly amplify the flavours of the ingredients used. Too little sugar and the drink will taste flat. This is especially so if using a dry sherry such as Fino - in which case consider adding some sweeter sherry such as a Sweet Oloroso or even some Pedro Ximénez.

Cobblers are arguably best shaken with cubed ice and strained into a glass filled with fresh crushed ice - that's certainly my preferred method. However, in his The Fine Art of Mixing Drinks, David Embury states, "in making any of the Cobblers, the goblet is first filled with fine ice. If goblets are not available an 8- to 10-ounce Highball glass can be substituted. The ingredients of the drink are not separately shaken but are poured over the ice in the glass, the sugar or liqueur first and the wine or spirituous liqueur last. The contents of the glass are then churned with a bar spoon until frost appears on the outside of the glass. Straws are then inserted and the drink decorated with fruit and mint and served."

Who am I to argue with Embury, but perhaps consider shaking with cubed ice, straining over fresh crushed ice and then also churning with a barspoon prior to garnishing.

The earliest Cobbler recipes call for fruit, and indeed a few wedges/chunks or berries muddled prior to shaking helps make Cobblers the delightful summertime refreshers they are - perfect for a sunny lazy afternoon.

A garnish of berries and wedges of fruit is essential to a Cobbler, as Jerry Thomas says in his 1862 Bart-tender's Guide, "to make it acceptable to the eye, as well as to the palate, it is necessary to display some taste in ornamenting the glass after the beverage is made."

Wine was highly prized in 19th century America and mixed drinks thrived in the taverns where the drink of choice for three decades, 1810s to 1830s, was the Mint Julep (or more correctly for the time, the Mint Sling). During the 1830s, the Sherry Cobbler emerged and by the end of that decade, this new wine cocktail dominated.

Cocktail historian David Wondrich unearthed the earliest known reference to a Cobbler in the 1838 diary of Katherine Jane Ellice, a Canadian who diarised the drink after coming across it while travelling in the USA. The Sherry Cobbler also notably appears in the first known book specifically aimed at bartenders, Jerry Thomas' 1862 The Bar-Tender's Guide. 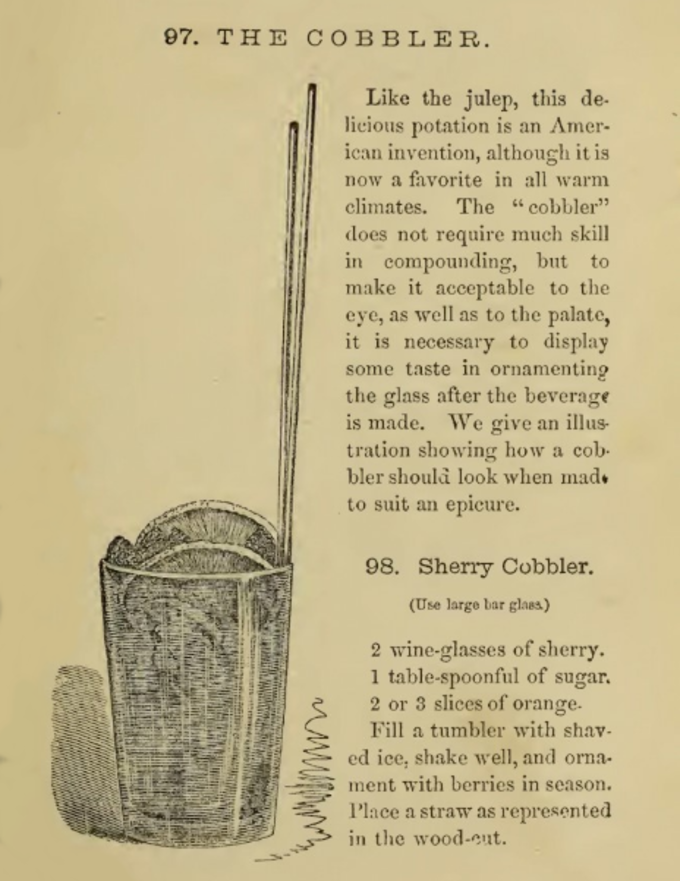 The Sherry Cobbler's popularity continued to the end of the 1800s and beyond, with Harry Johnson writing in his 1888 New and Improved Bartender's Manual, "This drink is without doubt the most popular beverage in this country, with ladies as well as with gentlemen. It is a very refreshing drink for old and young." Sadly, like so many great things in American cocktail culture, "Cobblers never really emerged from Prohibition as a popular category", at least according to David Embury in 1949.

The Sherry Cobbler was the first of what became a family of Cobblers with Jerry Thomas including a Champagne Cobbler (with "one bottle of wine to four large bar glasses"), a Catawba Cobbler, a Hock Cobbler, a Claret Cobber, a Sauterne Cobbler and a Whiskey Cobbler in his 1862 book. However, the Sherry Cobbler remained by far the most prevalent - as it does to this day.

The Cobbler & the straw

The drinking straw was a new invention at the time the Cobbler emerged, indeed, to quote David Wondrich from his 2015 Imbibe Revised Edition, "the Sherry Cobbler was the killer app that brought it into common use."

But why is a straw such a necessary appendage to a Cobbler? Because a Cobbler is served with crushed ice and drinking directly from a glass or a julep cup is an unpleasant lip-freezing experience. The invention of the straw made such generously iced cocktails drinkable and enjoyable. To borrow another quote from Wondrich, this time recounted from a 1873 edition of the [Nebraska] Grand Island Times, the "straw is a pretty useful article - when one end is bathed in a Sherry Cobbler."

It's worth remembering that the straws used in early Cobblers were just that, 'straw', usually rye, or even hollow pasta (macaroni or vermicelli), the paper straw wasn't patented until 1888.

Metal straws are more luxuriant than paper or other alternatives and conduct the cold from the ice they are plunged into, effectively maintaining the liquid's coldness until the point it passes your lips.

The use of ice in drinks itself was little older than that of the straw, first widely used in the 1820s, a mere decade before the Sherry Cobbler emerged, and it is theorized that the Cobbler is named after the small cobbles of ice it was chilled with, in an age before the advent of machines producing finer crushed or even snowy ice.

The Cobbler & the shaker

The Cobbler is not only said to have brought about the invention of the drinking straw but also the cocktail shaker - well at least what is termed 'three-piece' shakers, hence they are commonly named 'Cobbler shakers'. Truth is Jerry Tomas specifies "shake well" in his 1862 Sherry Cobbler recipe while 26 years later Harry Johnson says "fill the glass up with fine crystal ice; stir well with a spoon" - no mention of shaking. 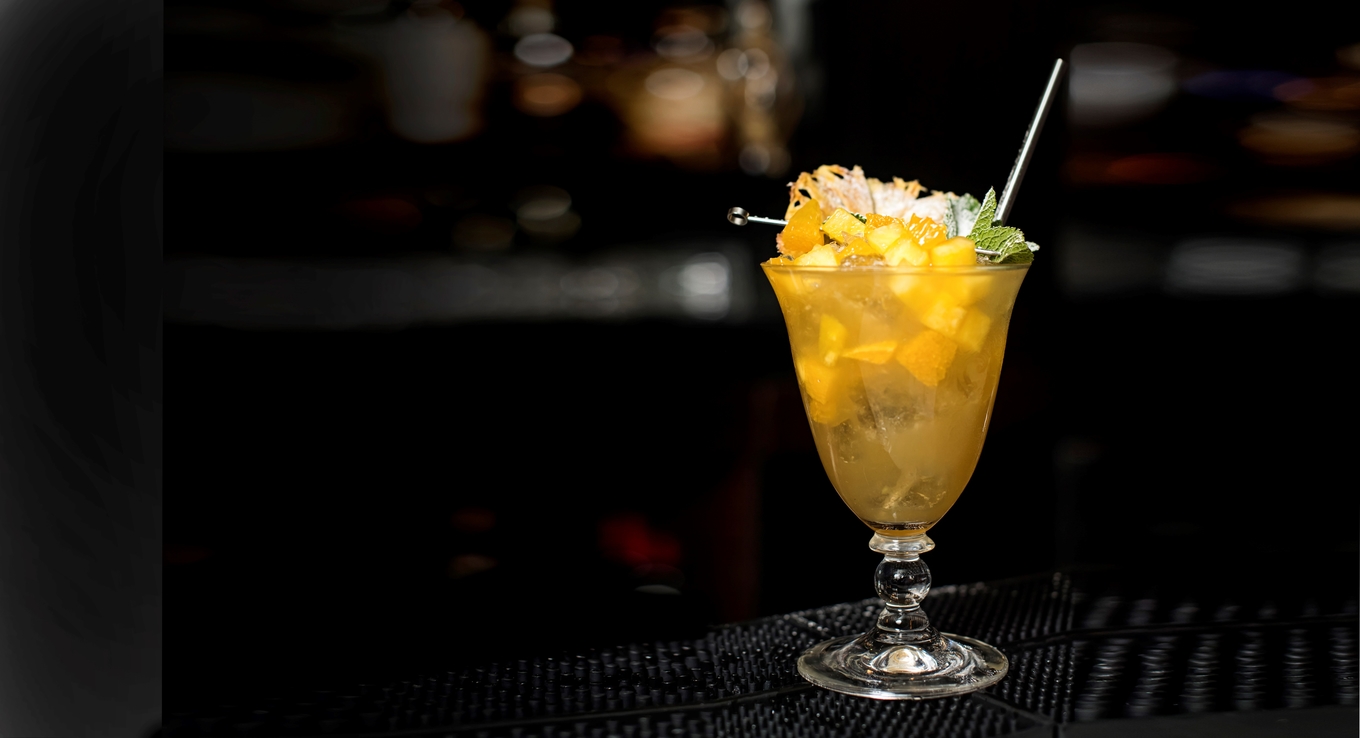