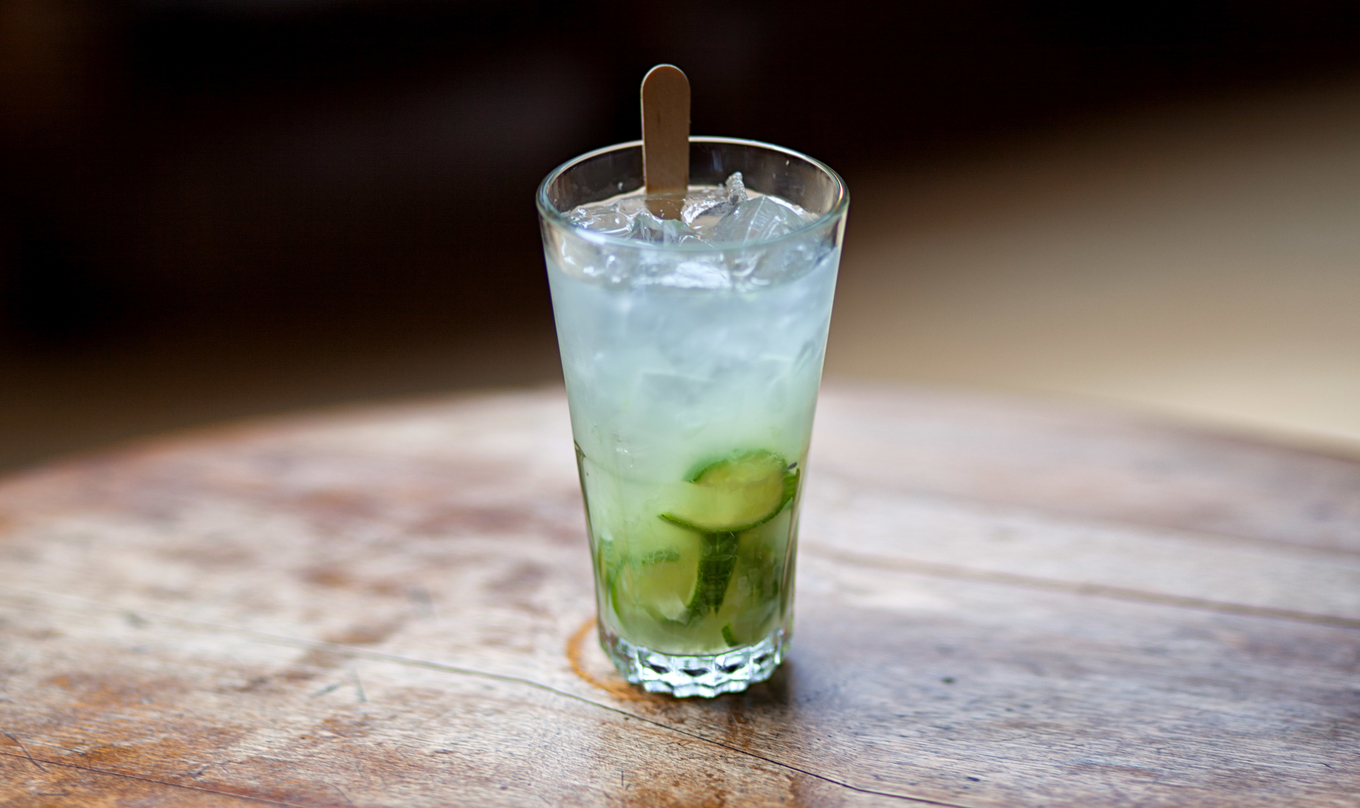 Pronounced 'Kai-Pur-Een-Ya', this traditional Brazilian cocktail is made by muddling limes with sugar and then adding cachaça and ice. It's a simple rustic drink, usually served without a garnish, but like most things, it's not as straightforward as it first appears.

The name Caipirinha literally translates as "country little girl" and it emerged from the countryside of São Paulo state. There are many stories of its origin, one saying that in the early 19th century it was common to consume a mix of cachaça, lime, honey and garlic due to the Spanish flu outbreak in the country. Over time, this medicinal drink arrived at the port of Santos where it came to be called "Caipirinha", since the main ingredient, cachaça, usually came from Piracicaba, in the countryside of São Paulo.

Another version recounts that sailors who used to drink citrus juices with spirit to ward against scurvy, adopted cachaça instead of rum when they arrived in Brazil.

Much of Brazil's population is poor and locally produced cachaça is cheap. Since the Millennium, premium brands of cachaça have emerged but even these are cheap when compared to foreign imported spirits. Cachaça is the spirit of the Brazilian people and it is mostly consumed mixed in a Caipirinha.

In recent decades, vodka has impacted cachaça consumption in Brazil and it is usual to see Caipiroska (Caipirinha made with vodka in place of cachaça) also listed - often also with "Especial" and "Luxo" options made using premium and super-premium vodka brands.

Brazil's climate offers fruit in abundance with many varieties unrecognisable to those of us from Europe or North America, and these are commonly muddled with lime in flavoured Caipirinhas. A wide variety of spices are also used, and combinations of fruit and spices often comprise "Caipirinha Especial da Casa", the 'special Caipirinha of the house' found on many Caipirinha menus. 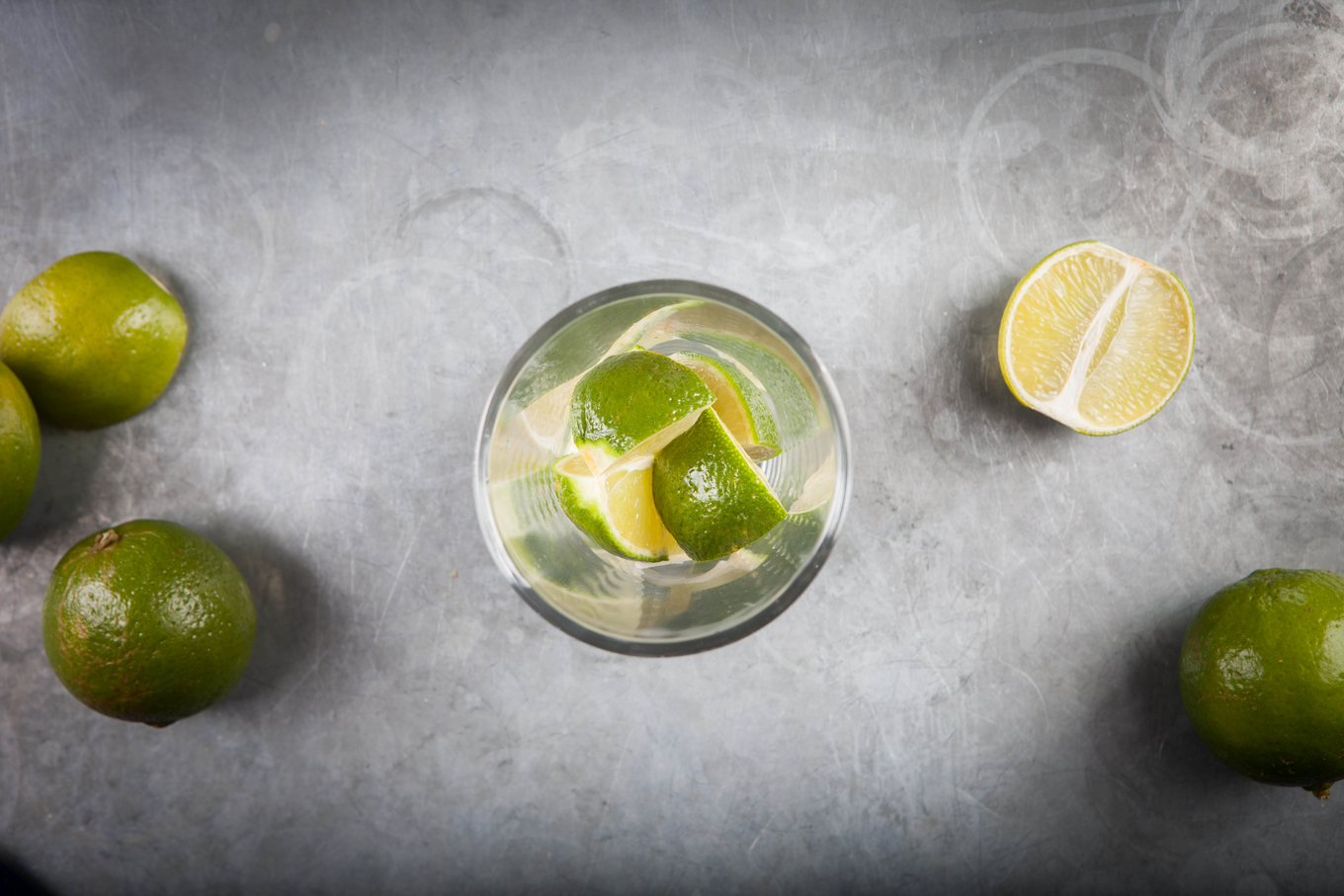 How to make the perfect Caipirinha

Like that other great cane spirit, lime and sugar cocktail - the Daiquiri, making a perfect Caipirinha is all about achieving the perfect balance between citrus tartness, sugar sweetness and the alcoholic strength and flavour of the base spirit.

Also, in common with the Daiquiri, there are a number of variations in the ingredients used and the way Caipirinhas are made - besides flavouring with various fruits, herbs and spices. 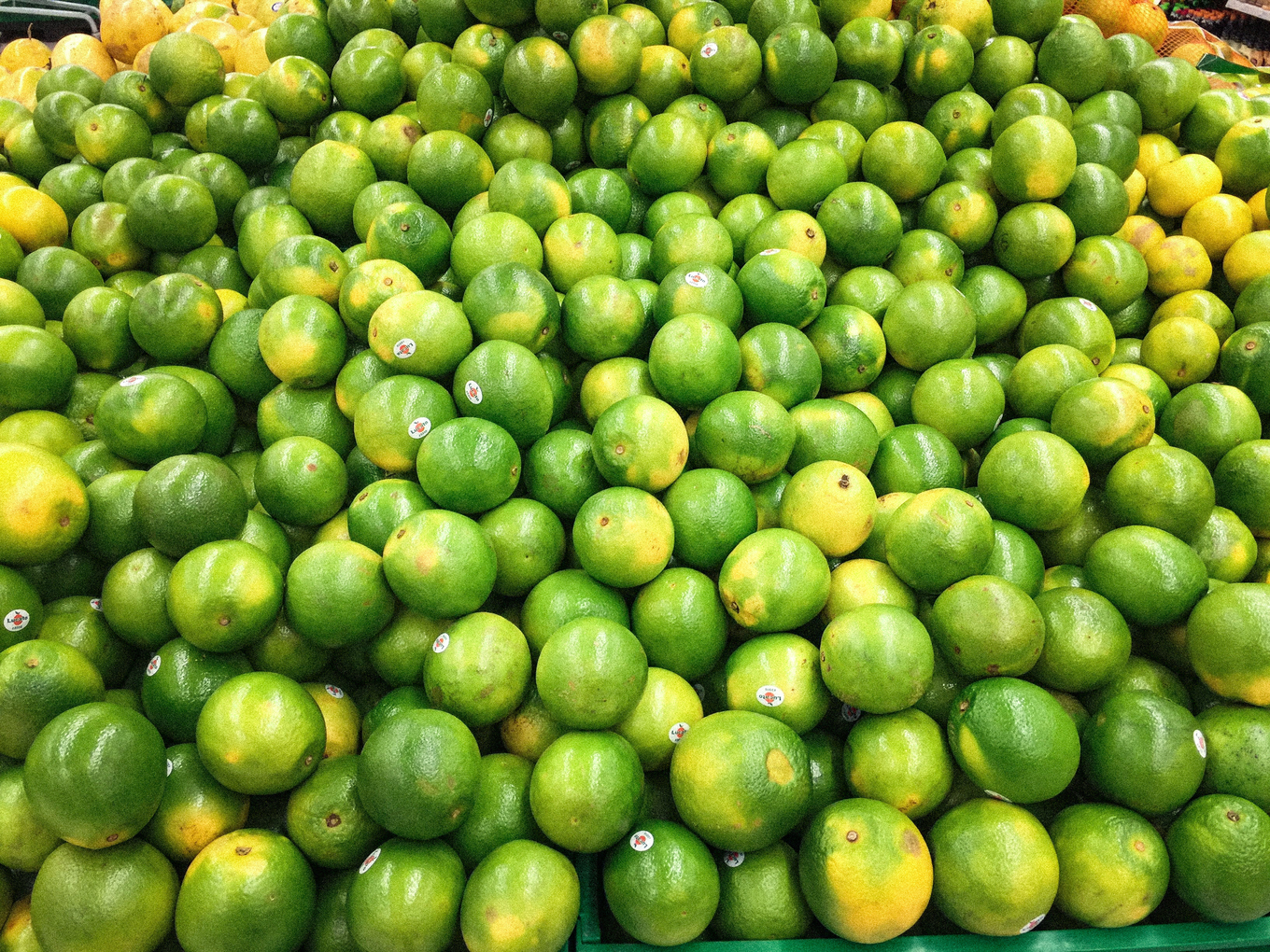 The variety of lime used

The myriad varieties of green citrus fruits collectively known as limes ('limão' in Portuguese) available around the world and the various names they go by in each country cause much confusion. In Brazil, Limão Tahiti (Citrus Aurantifolia) are commonly used to make Caipirinhas. The first Limão Tahiti trees arrived in Brazil during the mid-20th century, probably coming from Tahiti, hence the local name.

However, what Brazilians call Lima da Pérsia (Citrus limettioides) "Persian lime", a quite different fruit with yellow skin (also known as Palestinian sweet lime or Indian sweet lime) is also commonplace in Brazil and often presented as an alternative on Caipirinha menus - a premium option as it were, but the original recipe is with the green Limão Tahiti.

Happily, what the Brazilians call Limão Tahiti, the Tahitian lime, is the variety of lime most commonly found in European and North American supermarkets.

To make Caipirinhas, be sure to select limes that are ripe and feel soft when you squeeze them. I use a half lime per drink and I recommend cutting the fruit pole to pole, rather than around the equator. Remove the lime's central core by cutting either side to create a v-shaped grove running pole to pole on each half. Then cut each half into eight half-moon-shaped slices rather than wedges. 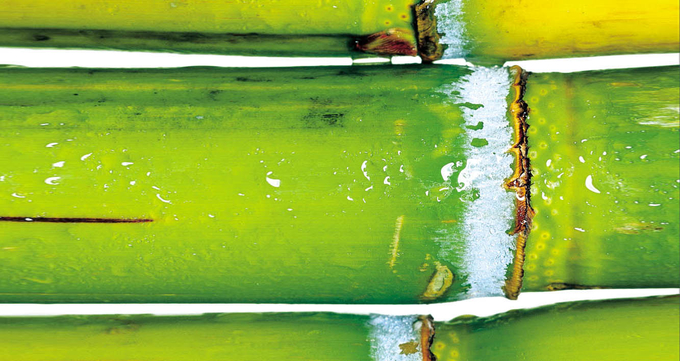 What sugar to use?

There is much debate among bartenders as to whether granulated/caster sugar, or sugar syrup should be used when making a Caipirinha. Those who favour crystals over syrup argue that muddling with abrasive sugar helps extract the oils from the lime's skin. Others dislike the crunch of sugar when the sugar crystals don't entirely dissolve, also arguing that syrup is easier to measure accurately.

In Brazil, crystalised sugar is almost always used and there's something about the rustic nature of this drink which makes the use of pre-dissolved syrup inherently wrong - at least according to my Brazilian friends. However, use the smallest crystals available - caster or powdered sugar rather than granulated. And be sure to use flavoursome cane sugar rather than comparatively bland beet sugar.

Whether you should use brown or white sugar is another question. I prefer my Caipirinhas made the way they are in their native Brazil, with white sugar - although "white" Brazilian cane sugar has a slight yellow hue when compared to the brilliant white Caribbean sugar sold here in the UK. The flavour is also subtly different but claims that Brazilian sugar is sweeter are unfounded in my experience. It is perhaps not refined to the same degree of purity, so the differing colour and taste. 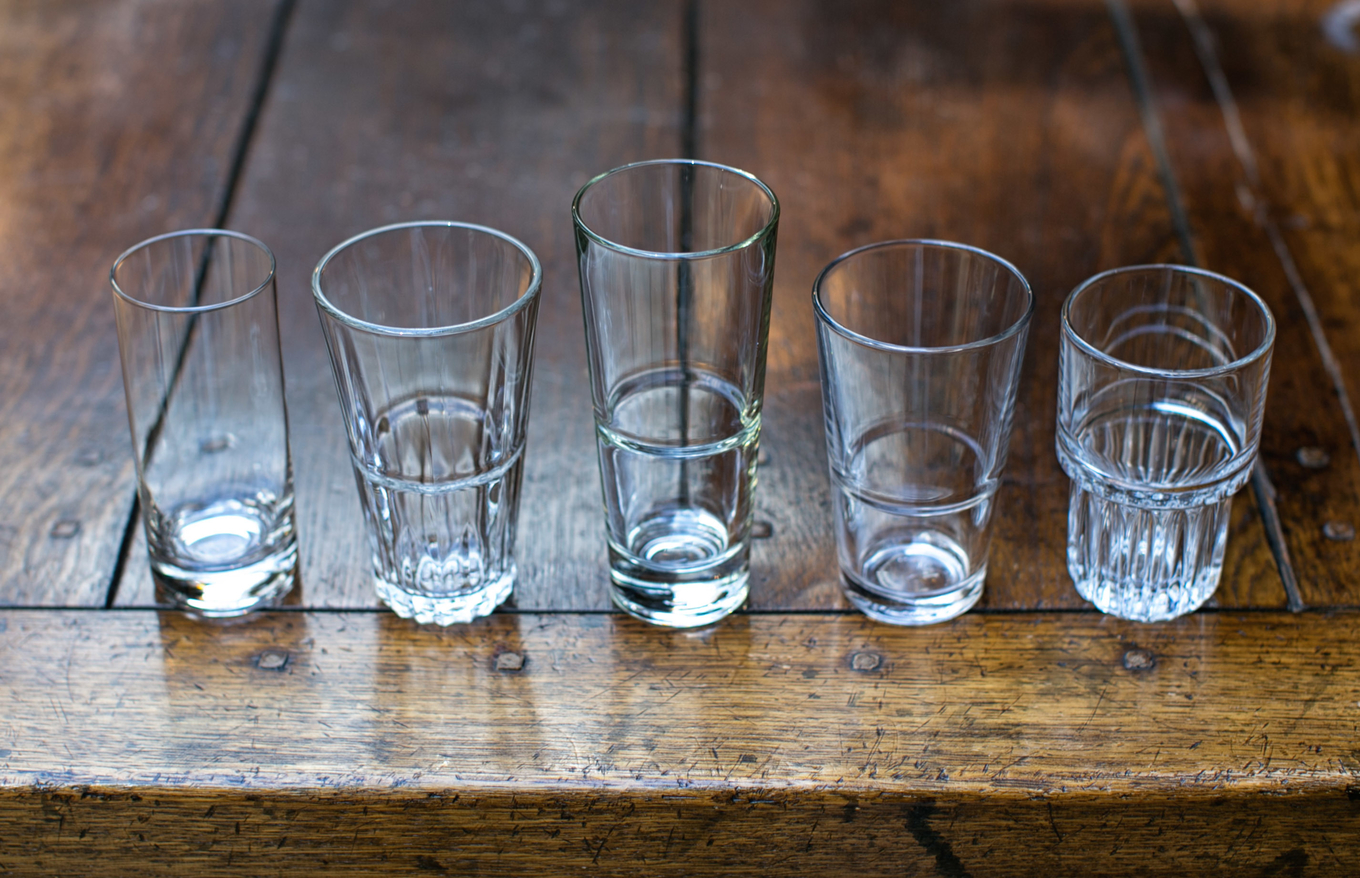 The best glass and serve

Yes, you can make a great Caipirinha by measuring the ingredients carefully and precisely into a cocktail shaker, shaking with ice and then straining into an ice-filled glass. However, this is really a cachaça-based Daiquiri rather than a Caipirinha - good but unrecognisable as the Brazilian national drink.

Others muddle the lime and sugar in the base of the shaker, add the cachaça, shake with ice and then pour (without straining) into the glass. The result looks like a Caipirinha and depending on the ice used this method also makes an acceptable drink, but not really a Caipirinha.

A Caipirinha should be muddled and built in the glass. It's easier to muddle the limes in a robust tumbler/rocks glass than it is in a tall glass, so in both its native Brazil and other countries where the Caipirinha has travelled, this is the style of glass most often used.

However, I prefer my Caipirinha served in a 30cl / 10oz highball glass, a serving style I came across in some of my favourite bars in São Paulo. (I use Libbey Brooklyn DuraTuff.)

I like to muddle the fruit and sugar in a low-sided rocks tumbler glass and then tip the muddled fruit into a highball glass. I swirl the cachaça in the rocks glass to collect any remaining fruit pulp and sugar before also tipping the cachaça into the highball glass in which the drink is to be served. It's a bit more of a faff but the finished cocktail looks, and so seems to taste better.

In Britain and other 'new' cachaça markets, it is common to serve Caipirinhas with crushed ice, but in Brazil, this drink is served with cubed ice - actually, usually small tubular-shaped machine produced ice that has a large surface area, so adding dilution to the drink. Hence, if you are using large ice-cubes, crack each cube into several chunks using an Ice Tapper. Please don't use finely crushed ice as this appears to kill the drink's aromatics and flavour. 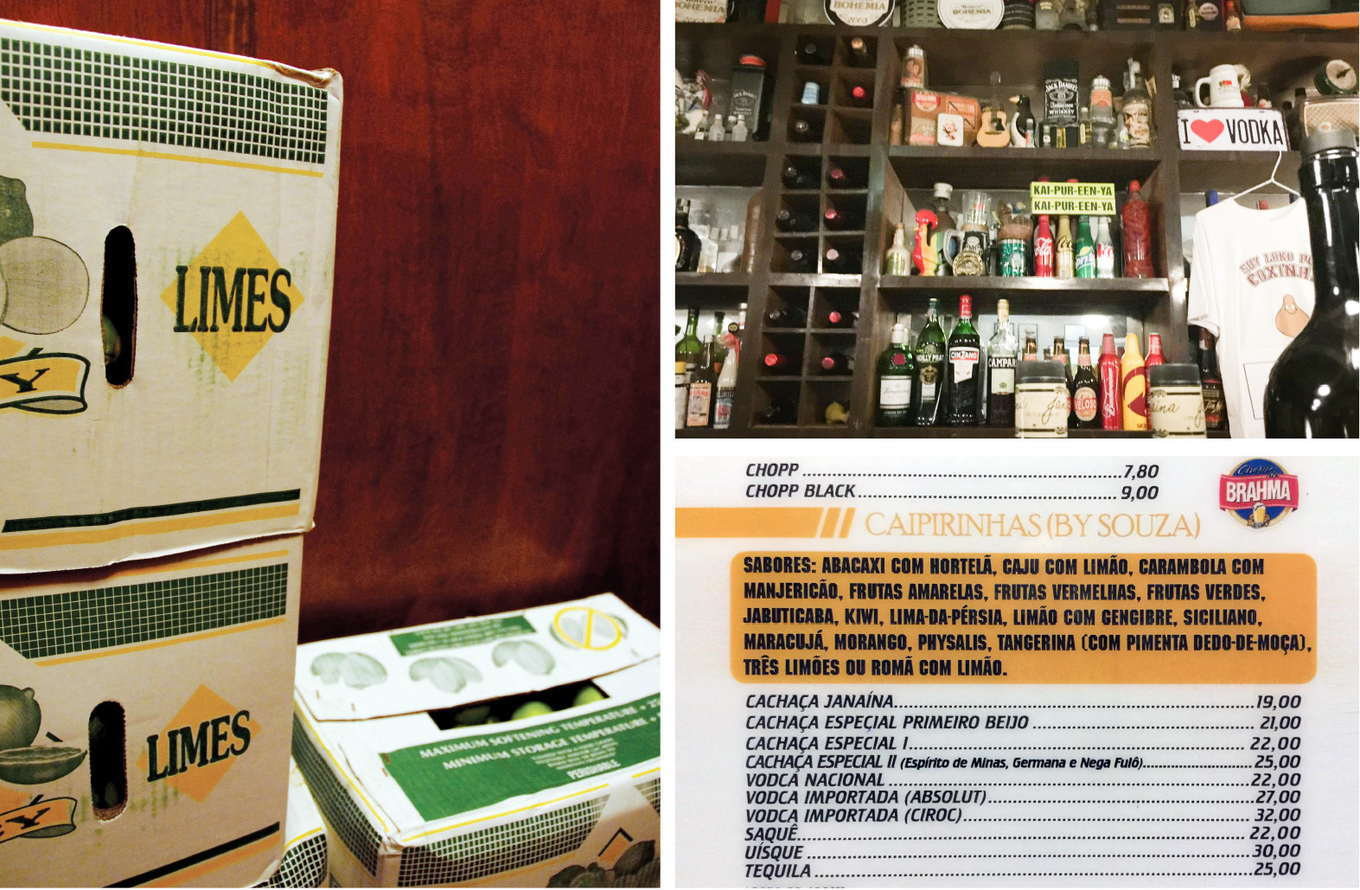 You can view my preferred Caipirinha recipe on our cocktail database but here's a step-by-step explanation:

1. Wash the lime and cut off the very ends of its poles (top & tail) before cutting in half (from pole to pole).

2. Take one half of the lime and slice into 3-4mm thick half-moon shaped segments. (I prefer to cut the lime skin side facing down as this seems to produce less of a pool of lost juice on the cutting board.)

3. Transfer the chopped lime from the cutting board into robust shatterproof rocks glass.

5. Dilution is key to a good Caipirinha, so depending on your ice, consider adding 22.5ml (¾oz) chilled water. Or, alternatively, add your fruit of choice - e.g. 8 raspberries, or 3 strawberries, or ½ a kiwi fruit - and muddle some more. The juice from the fruit adds dilution as well as flavour.

6. When sure muddling has fully extracted the juice from the fruit and the sugar is dissolved, tip/pour the muddled fruit and sugar into the serving glass (preferably a 30cl/10oz highball glass).

7. Pour cachaça (stored in the freezer) into the rocks glass (previously used to muddle) and swirl to rinse glass before pouring cachaça into the serving glass. Stir to ensure cachaça is well mixed with fruit.

8. Crack (rather than crush) four large ice cubes and drop them into the serving glass.

9. Stir before adding more ice and then serve with a stirrer (a wooden lolly pop stick perhaps) but no straws.

Caipirinhas and variations on the theme are staples in cachaçarias, traditional Brazilian bars which specialise in cachaça. The following are some of the fruit-flavoured Caipirinha (Caipifruta) available. Names in blue link to recipe pages: 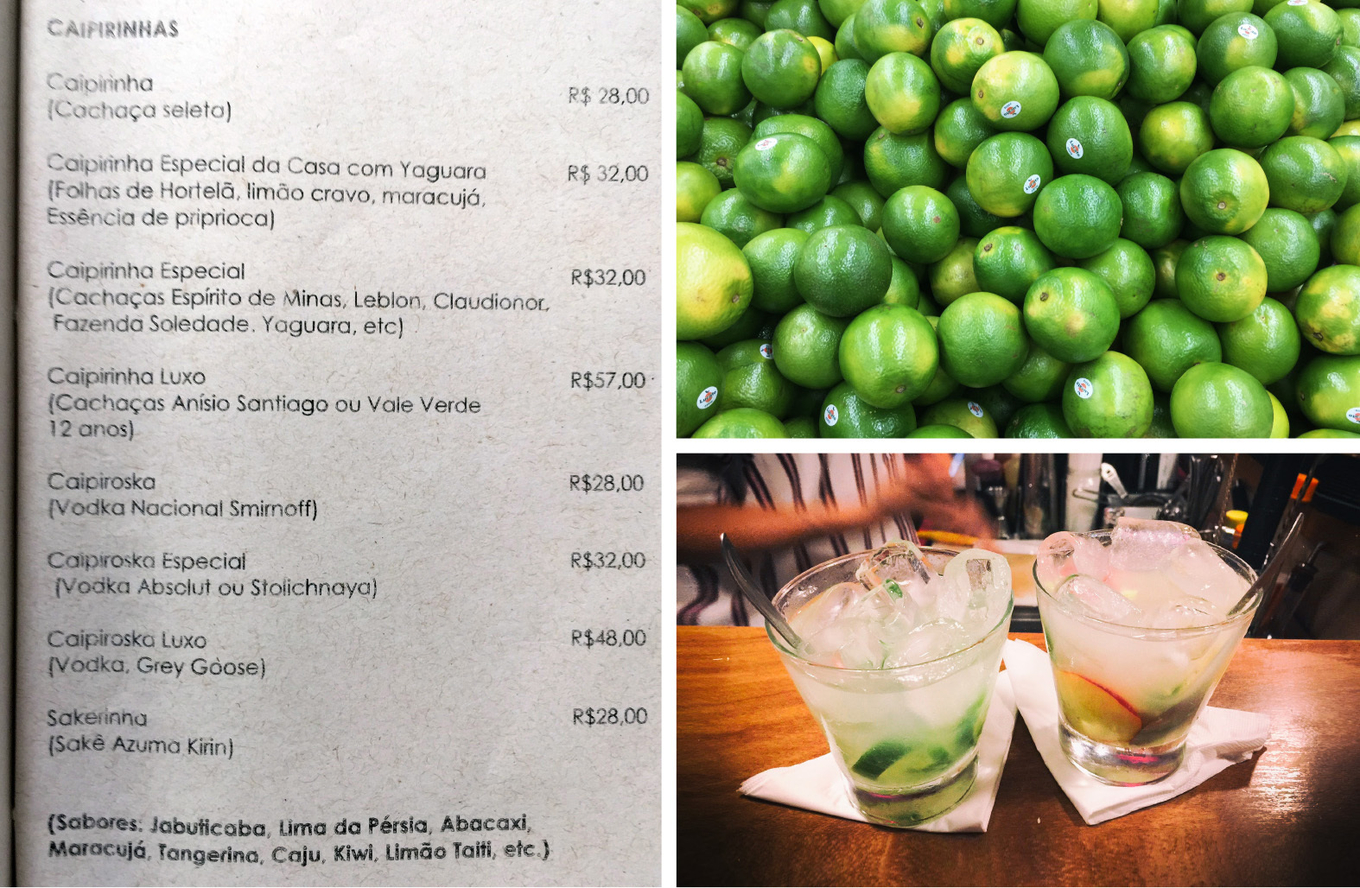 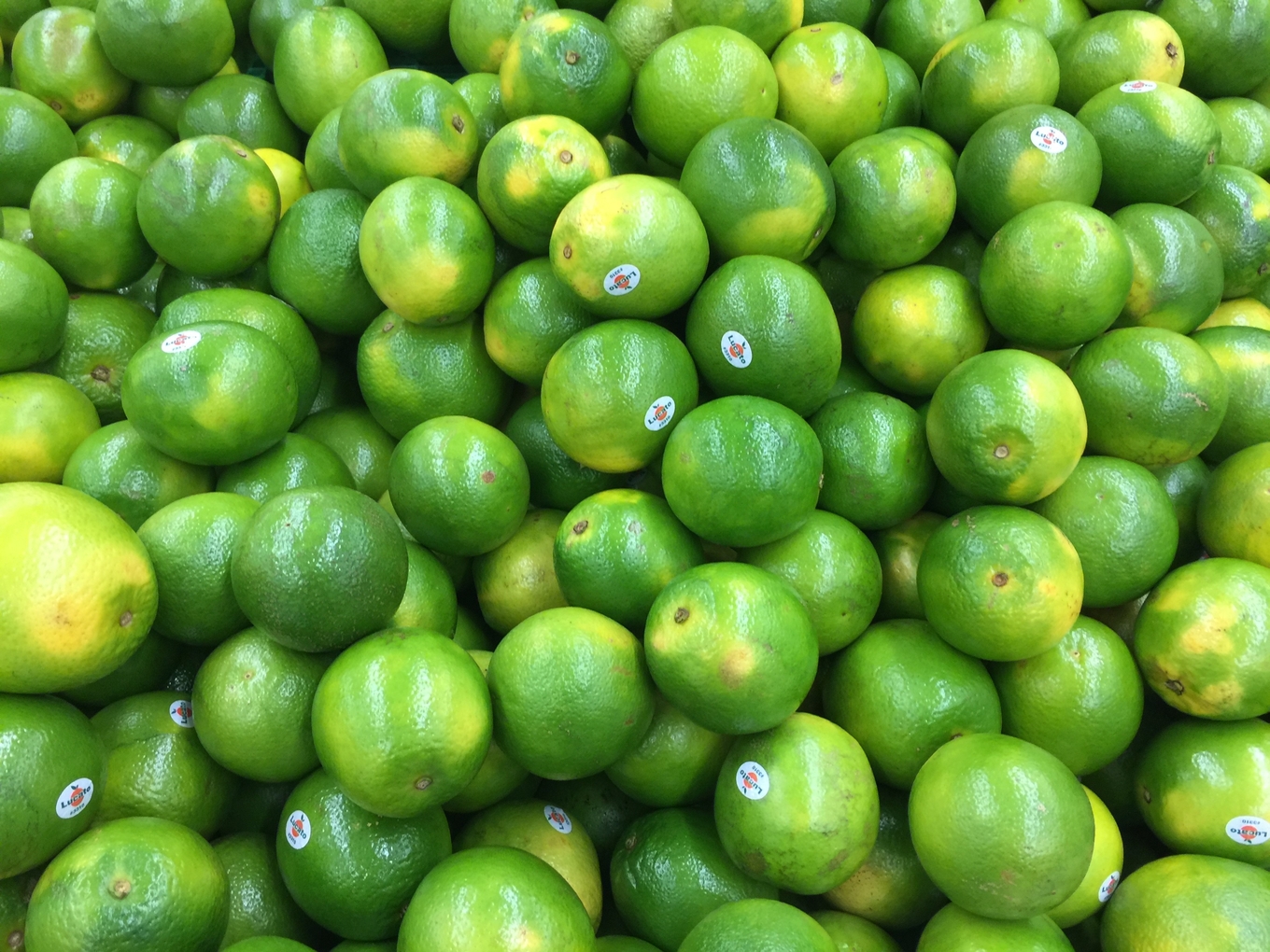 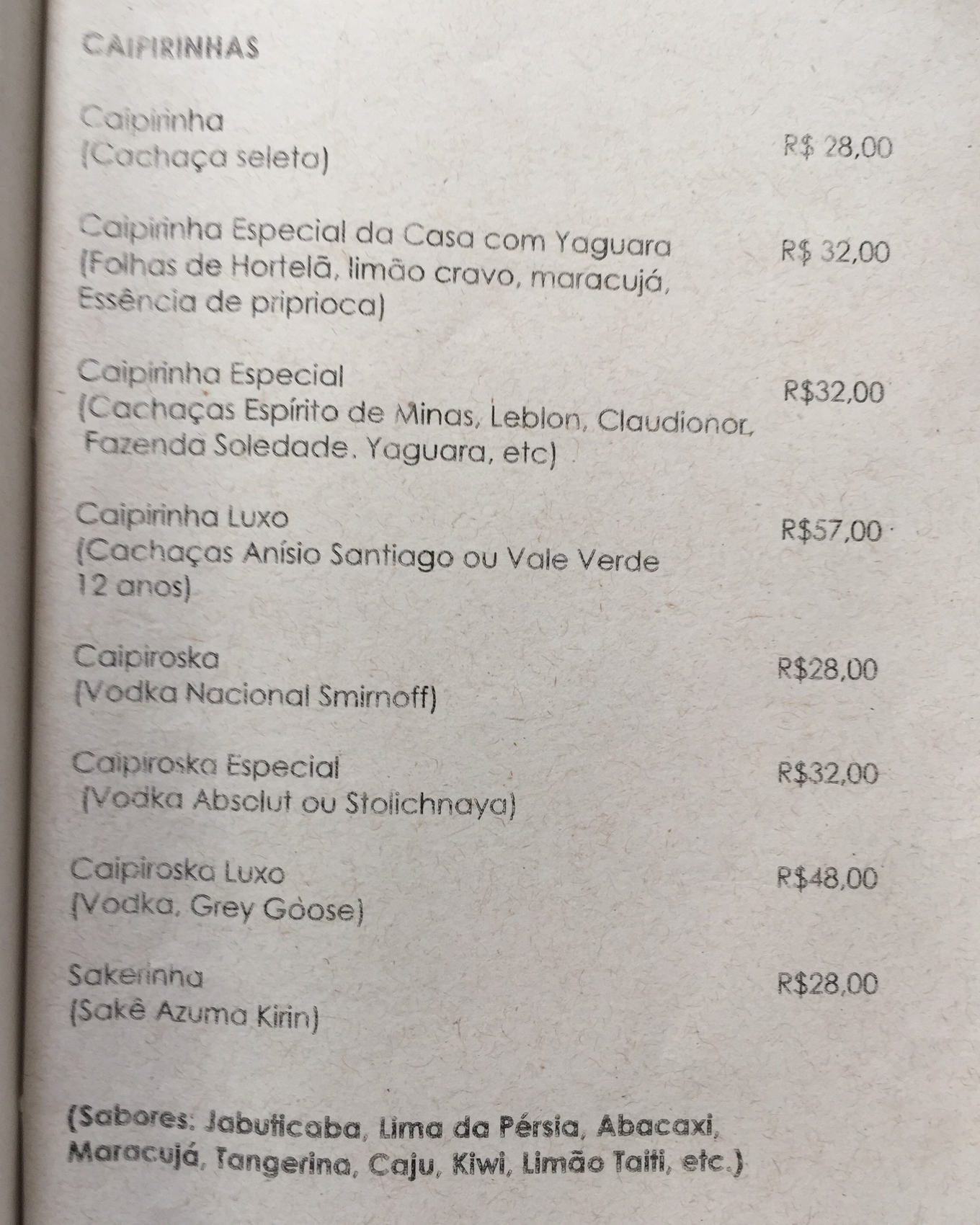 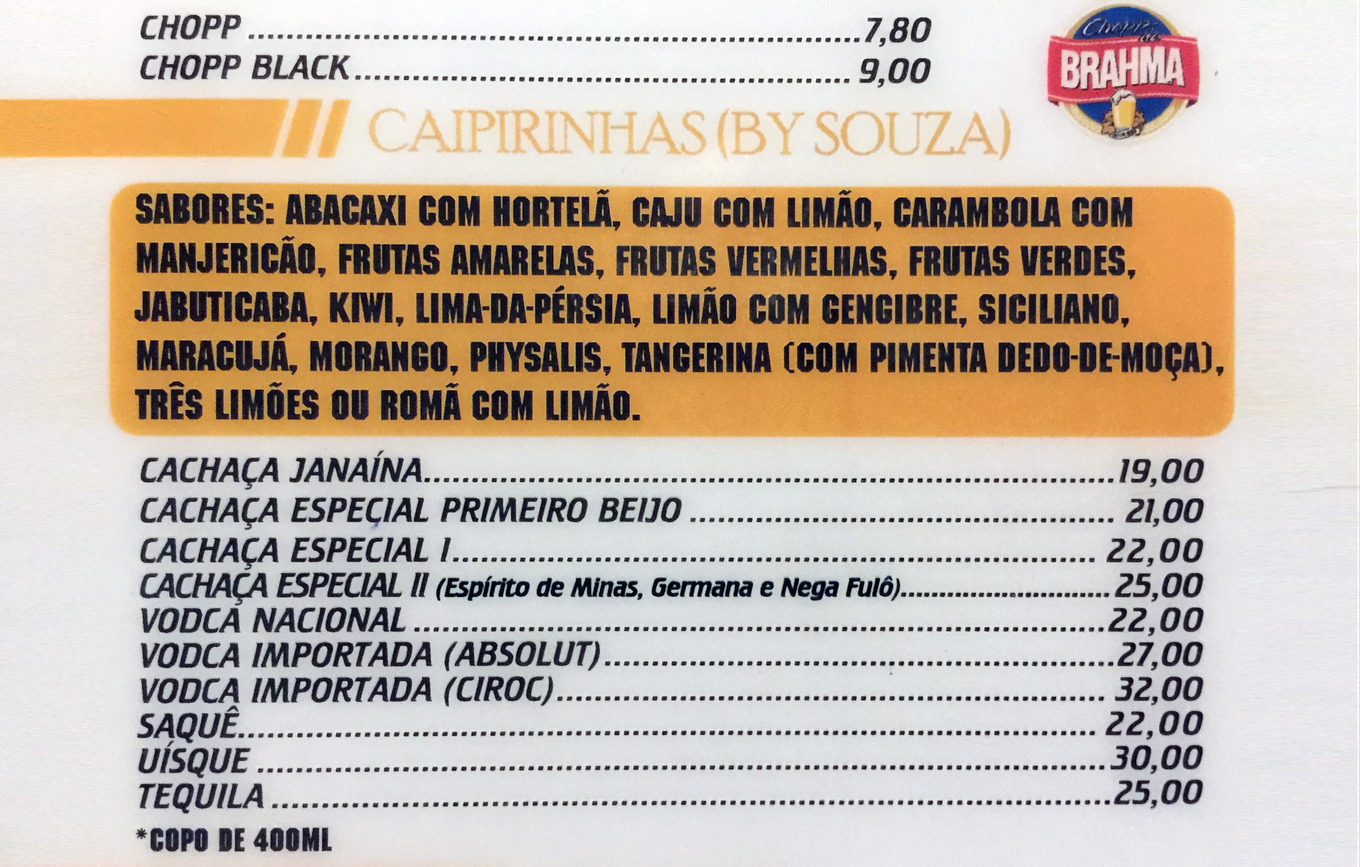 ... comment(s) for Caipirinhas – history, styles, flavours & how to make