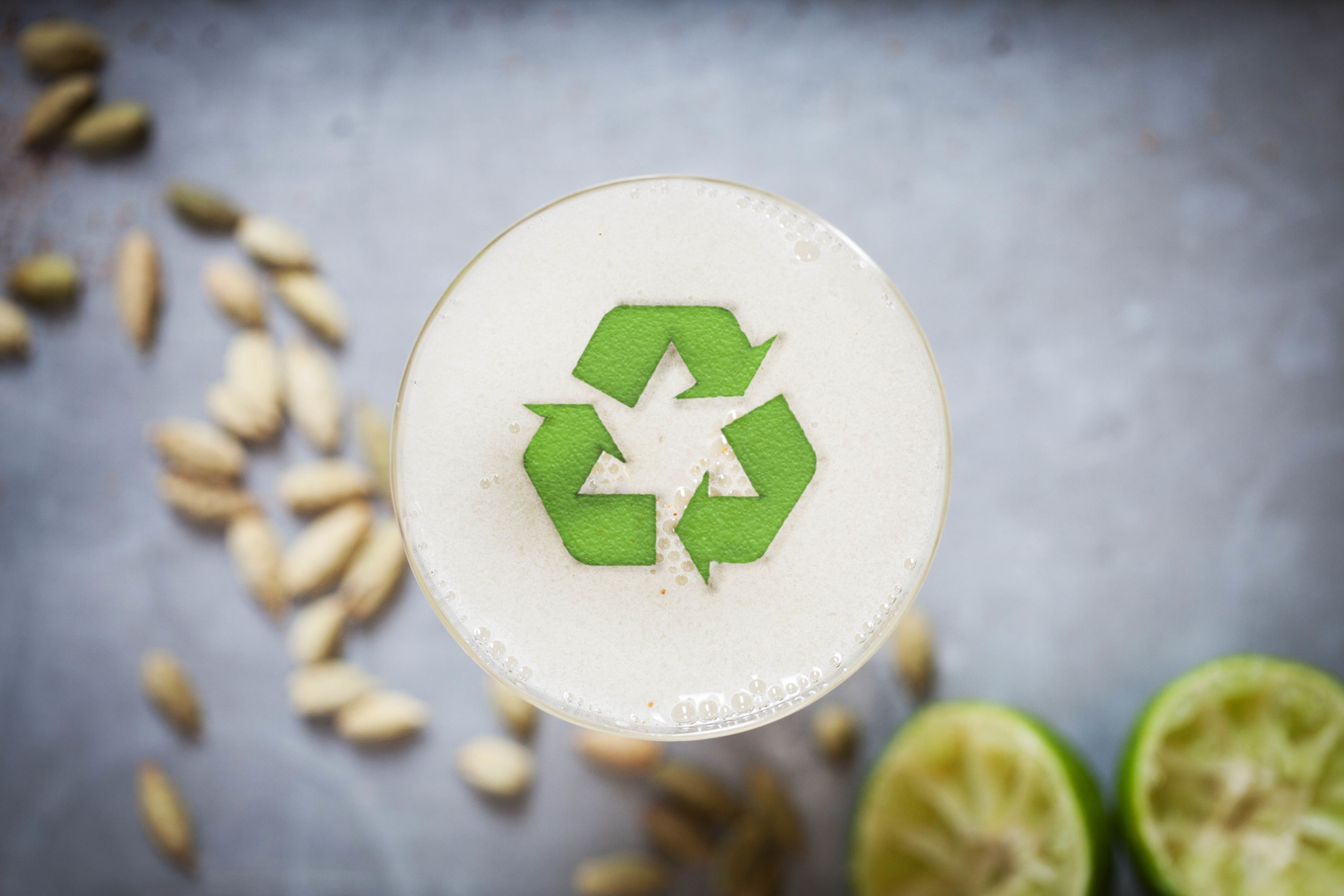 Cocktails are a luxurious indulgence, a special treat. Folk are careful about other purchases in order to afford little extravagances such as cocktails. So, when splashing out more than twice the price of a beer, they perhaps don't want to hear their cocktail was made from stuff salvaged from the trash in a quest for sustainability.

Most cocktails are made using ice and the energy and nasty greenhouse gasses involved in its production undermine cocktails' green credentials before we even start talking about the exotic ingredients flown halfway around the world. Those of us who make a living out of others choosing to pay a premium to drink cocktails over cheaper more sustainable beverage options such as locally made wine or beer should be wary of damaging both the quality of the cocktails we serve and their being perceived luxurious.

I'm not siding with twits who are climate change deniers and I thoroughly support evangelists. For the good of mankind and planet earth, sustainability is more than a highly desirable goal, it's crucial. So with this in mind, here are seven things we could be doing in order to be more sustainable but without compromising the quality or premium perception of the cocktails we serve:

1. Be sure to use all the good stuff. Peeling citrus fruit prior to juicing and using the reclaimed peel as a garnish or to make oleo-saccharum. Flat champagne is tasty and should be repurposed before it oxidises rather than being discarded. When a consumer reads "champagne cordial" on a cocktail menu they don't think that the champagne has been salvaged from being poured down the drain because it was flat. Far from it, they read 'champagne' and so think luxury - quality, expensive.

2. Turning off taps between cleaning of shakers and other tools and the use of equipment that more efficiently dispenses this precious resource. Foot-operated taps and jet washers help save water.

3. If using aircon, then don't set the temperature too cold or conversely heating excessively hot.

4. Non-biodegradable, plastic consumables (beyond just straws & stirrers) should be avoided. Stripy waxed paper straws and even raw pasta tubes have thankfully replaced plastic straws. However, most drinks don't require a straw at all and even paper straws use energy and resources. Fact is, unless a cobbler or 'frozen' cocktail, drinks taste better when you drink from the rim of the glass rather than through a straw as most of the flavour comes from the drink's aroma. Straws mask the drinker from the aroma of what they are drinking and, as Desmond Payne, the celebrated gin distiller once said to me when someone handed him a G&T with a straw, "straws are for children."

5. Wherever possible, menus should feature fruit, vegetables and herbs that are in season locally rather than those airfreighted from distant shores. It's also worth considering using preserving techniques such as shrubs to stretch the produce of bountiful months.

6. Consider the sustainable credentials of the brands you purchase and look for products certified B-Corp, Organic, and Biodynamic.

7. Serve draught beer, mixers and even spirits where possible rather than bottles or cans to save on packaging and transport. (And when it comes to draught beer, traditional British-style cask ales are more sustainable than keg lagers.)

In a quest to be sustainable some people perhaps take this mostly laudable concept a tad too far and for the good of cocktail culture, I believe the following "sustainable" practices are unsustainable:

1. Some things are simply best consigned to the bin, or preferably the compost heap. If an animal would discard that part of a plant rather than eat it, then chances are, humans are best advised to also discard it. A lemon for instance yields very tasty juice and has a bounty of flavoursome oils captured in its skin, but the husk that separates these has little of value to contribute to a tasty cocktail.

2. Sadly for those of us that live in countries too cold to cultivate citrus fruits, there is no tasty alternative for fresh citrus fruit and all manner of mixing up acids does not make for a good daiquiri. Citrus is vital to the majority of classic cocktails and sadly powered citric acid is no alternative to fresh fruit. Not only does it not taste as good, but its production has its own environmental consequences. Fresh citrus juice is a delicious and unprocessed source of natural acidity but if you want to avoid using imported citrus fruit, then perhaps make another cocktail such as a spritz that utilises the acidity of white wine rather than citrus acidity.

4. I have come across "eggshell syrup" and "eggshell soda" being used as a cocktail ingredients, and no, it was not on April Fool's Day. I may be missing a trick and perhaps these are great ingredients in a cocktail named Emperor's New Clothes, but the use of egg shells as a cocktail ingredient smacks of going too far. However, egg shells do make great compost and are a good source of calcium but "don't consume more than 1 tsp a day as it can irritate sensitive digestive tracks."

Think carefully about the pros and cons of what you do to in the pursuit of sustainability. Use the word 'delicious' more and the 'sustainable' less on your menu and your cocktails will be perceived as tastier. You don't have to shout about it but be sustainable in your choices, especially those involving transport and travel. And remember, cocktails should be delicious luxuriant treats.

... comment(s) for Sustainable yet luxurious cocktails