We turned 20 in 2017. Hoorah! The world has come a long way since I set up the company we work for in 1997 to publish a booze magazine. Like so much of the modern world, we're now digital and, as some of you may have noticed, we’ve been adding dedicated country sites with local partners. Greece, was our first in 2015 and we added Brazil, Australia, Mexico and the Netherlands over the past year.

This year also saw our first documentary, a short film chronicling how one of the world's greatest and most enduring bars, the American Bar at the Savoy, conceived and created their cocktail menu: you can watch it here if you haven't already. And, as classicists battled it out with lab rats for control of the cocktail space, we've integrated both Amazon and The Whisky Exchange on our site, making it easier for readers to buy bottles, books or both.

World trends during 2017 were a little more sobering so I asked Theodora Sutcliffe to gaze back across an eventful year.

After 2016, a year in which several publications seriously asked, "Is 2016 the worst year ever?", 2017 was... special. The spectre of nuclear war, vanished for most of us since the 1990s, was firmly back on the cards. Extreme weather events segued from the biblical to the apocalyptic. And many of our favourite celebrities, at least those who hadn't died in 2016, were revealed to be full Savile as a tsunami of sexual harassment allegations swept through Hollywood, Parliament, Silicon Valley and beyond.

Oh, yes, and in a plot twist that many would have rejected as too far-fetched back in 2015, we learned that the American president, a reality TV star accused of sexual assault by at least 19 women, had been elected with the help of armies of Russian bots, trolls and hackers.

Two of the twentieth century's most notorious criminals bit the dust this year. Charles Manson, whose Manson Family cult slaughtered at least seven people, including Roman Polanski's heavily pregnant wife, in 1960s LA, died in prison in California. Ian Brady, who, with Myra Hindley, tortured and murdered at least five British children on the Yorkshire Moors, died of natural causes in a high-security psychiatric hospital after years campaigning to kill himself.

Two rock talents departed tragically early: Linkin Park's Chester Bennington and Chris Cornell of Soundgarden. Rock 'n' roll pioneer Chuck 'Johnnie B Goode' Berry made it to 90, with pianist Fats Domino not far behind; 60s rock chick Anita Pallenberg survived to an impressive 75; Tom Petty was still touring right up to his death in October. And, of course, France went into damn-near public mourning over the death of Johnny Hallyday, the permatanned native son who sold tens of millions of records in the French-speaking world, while remaining almost entirely unknown across the Channel.

In the world of cinema, James Bond star Roger Moore raised a quizzical eyebrow for the last time, while pancreatic cancer claimed John Hurt, one of the last great hellraisers, who partied with Oliver Reed, Peter O'Toole and Richard Harris. They don't make them like they used to...

The world's most bonkers nation, the hereditary dictatorship of North Korea, left its mark on a traumatised planet this year. North Korean spies recruited two accidental killers, at least one of whom believed she was on a reality TV show, to assassinate Kim's half-brother, Kim Jong Nam, at Malaysia's answer to Luton airport. Which at least makes a pleasant change from Kim's favoured mode of disposing of unwanted relatives: anti-aircraft guns.

To keep the world on its toes, North Korea tested hydrogen bombs and intercontinental ballistic missiles, flying rockets over the Japanese island of Hokkaido and issuing lurid threats against the US territory of Guam. Meanwhile, Donald Trump and Kim Jong Un hurled insults at each other on Twitter, in UN speeches and through North Korean propaganda videos. This brought a bemused world the bizarre spectacle of a portly US president calling an amply proportioned dictator "fat" on Twitter, not to mention the sheer viral joy of a Korea expert trying to keep it together as his children invaded his BBC interview. Watch here.

Cheerily, 2017 was the year where climate change became undeniable for pretty much everyone outside America, which withdrew from the Paris climate agreement - although many states, cities and corporations have vowed to stick with their original targets. Wildfires wracked California, hitting the vineyards in October and sweeping over more than 1,100 square kilometres in December: the Thomas fire may burn well into January. Autumn forest fires in Portugal and Spain killed over 100 people and devastated the landscapes, while Hurricane Maria, one of a spate of lethal hurricanes, may have caused over 1,000 deaths on the American island of Puerto Rico.

We learned that flying insect numbers had dropped by up to 75% in just 25 years, spelling an ecological catastrophe for the many lifeforms that depend on them for pollination or food. Warming oceans mean the Arctic is no longer producing the food it used to, either.

Terrorism was, of course, in the news: the UK experienced serial Islamist attacks in London and Manchester. There haven't been this many terrorist deaths on British soil in a single year since the IRA bombings of 1992. In Barcelona, a terrorist mowed down scores and killed 14; in Stockholm, a truck attacker killed five and wounded many more; serial attacks in Paris caused loss of life; while St. Petersburg experienced its second claimed terrorist attack of the year in December.

London learned that poverty kills as the 24-storey Grenfell Tower blazed for hours, taking the lives of over 70 men, women and children. And America learned absolutely zilch about gun control from its deadliest single mass shooting, where an angry white man armed with over 20 weapons, including assault rifles, killed 58 and left over 500 injured at a concert in Vegas. (Around 33,000 Americans die by gunfire every year.)

While Saudi Arabia used British and American weapons to bomb civilians in Yemen, and tens of thousands died in war-torn Syria, Burmese soldiers raped and murdered many thousands of Rohingya in Myanmar. Oh, yes, and migrants hoping to reach Europe were sold as slaves at a public auction in Libya.

While we awaited the march of our robot overlords, Ronan Farrow, son of Mia Farrow and Woody Allen (or maybe Frank Sinatra), and the brother both of Allen's second wife Soon Yi and of Dylan Farrow who accused Allen of child abuse, opened the floodgates on a welter of sex abuse news.

Farrow's thoroughly sourced story claims that star film producer Harvey Weinstein wasn't only a vile, obese lech, but also an alleged rapist. The scandal has since spun to encompass celebrities from Steven Seagal to Kevin Spacey, from Louis CK to Mario Batali, from Dustin Hoffman to George HW Bush, as well as ministers, journalists and influential men across Europe and the US.

And the #MeToo movement has brought it home to men across the world how very common sexual harassment, assault and abuse are in women's lives. With sexual harassment a major issue in the hospitality industry, can we expect it to be easier for female bartenders and servers to shut down - or indeed report - customers (and colleagues) who get out of line?

2017 was, surprisingly, a good year for LGBT rights. Australia held a referendum on marriage equality: the results came back as a resounding "Yes", with 61% in favour. Germany and Malta joined other European countries in legalising same-sex marriage.

Danica Roem became America's first out transgender elected official, taking her seat from transphobic politician Bob Marshall, who had held it for almost 25 years. Meanwhile, Catholic Ireland stunned the world when Leo Varadkar, a 38-year-old out gay man of Indian descent, took over as Taoiseach (Prime Minister) in June - and Zimbabwe finally got rid of antediluvian homophobe Robert Mugabe.

2017 was a confusing year for fans of the EU and Brexit alike. British Prime Minister Theresa May held a general election to confirm her Brexit mandate, and ended up with a minority government. Poland may lose its EU voting rights after giving the government control over appointing judges. Catalonia's long desire for independence spilled over into riots and political chaos, culminating when secessionists won control of parliament but lost the popular vote. Still, at least Britons knew their new passports would be blue.

Across the pond, Donald Trump limboed seamlessly under the low bar most had set for his presidency, assigning his son-in-law to achieve peace in the Middle East and his daughter to sit in for him at the G20, while refusing to condemn neo-Nazis and inflicting torturous handshakes on world leaders of all persuasions. For late night comedians, he remains the gift that keeps on giving. Watch here.

Government by Twitter saw feuds with London's mayor, Sadiq Khan, sportsmen protesting police brutality, senators from his own party, news organisations from Vanity Fair and the New York Times to CNN, and many more. A bewildering cast of character made their way through the White House: from Omarosa, who was allegedly physically removed by the Secret Service, to Scaramucci, who resigned after just 10 days, from Sean Spicer, who started his career by lying about the size of the crowd at Trump's inauguration, to Carter Page, described by one Russian secret agent simply as "an idiot".

And, as the year drew to a close, the Russia investigation, led by a Republican military hero and former FBI Director, Robert Mueller, provided entertainment for watchers around the world. At the time of writing, four Trump campaign aides, including former campaign chairman Paul Manafort and former National Security Adviser Michael Flynn, had been charged. And Trump, who complained vigorously about Obama's fondness for golf, had spent at least one day in every four at one of his properties - many of them golfing.

In news you may have missed this year, Japanese toilet producers gathered together to make the instructions for these multifunctional affairs less confusing. The eight new pictograms include big flush, small flush, lid raise, seat raise, fan, front spray, rear spray and stop, and have no doubt saved many from red faces - not to mention brown trousers - already. Happy New Year! 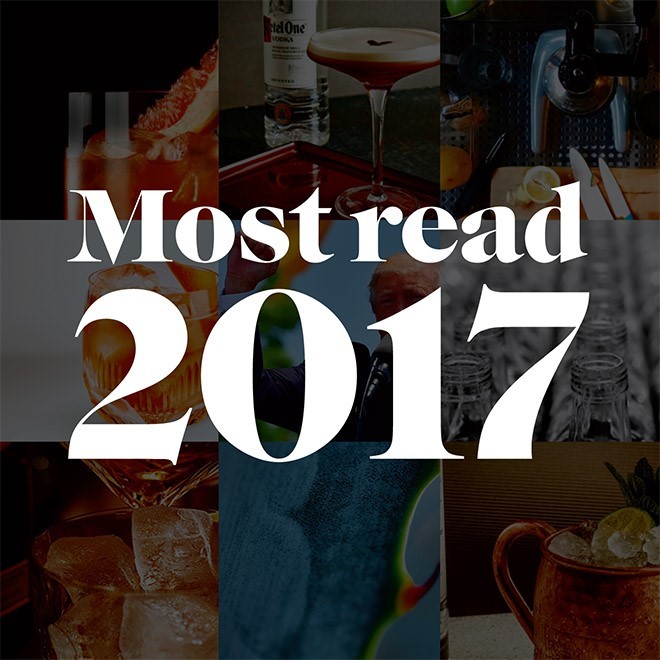 We have well over 1000 encyclopedia ‘long read’ pieces on Difford’s Guide, but during 2017 these were the 30 most read pages. Some of them were added