If you travel to Drink in Boston on a Saturday, you will very likely wait in a line to get in the door. A force to be reckoned with in this industry, a leader and a winner of countless accolades, the small, sparse space is home to some of America’s best talent. Jenny Adams went knocking and what resulted was General Manager and Bartender Ezra Star’s ode to 1821.

In 2010, Ezra Star was studying to become a doctor. She had a background in biochemistry, but it was a gig as a barback that would turn her focus to the bar industry. Originally from Venezuela, you'll now find her at Drink, where she's held a management position for years and has helped to make this spot one of the most respected places for a cocktail in America. Her year of choice to celebrate Cherry Heering's 200 year birthday was 1821, and she pays homage to the Battle of Carabobo.

"The battle of Carabobo was the pivotal moment," says Star, who grew up in Venezuela before moving stateside. "Just as the Tea Party in Boston (which happened down the street from Drink) led to the American Revolution, the battle of Carabobo was the defining moment in Venezuelan history. The battle was fought with Simon Bolivar (the patron saint of Venezuela) in command of rebel troops against the Royalist Spanish army. It was his second attempt at defeating them on this battle ground. It was a very challenging battle and the first true victory for the independence forces."

Looking at Boston bar scene in the same decade, the view was, "surprisingly similar to Venezuela," Star continues. "There was a tremendous amount of sherry being imported by the Spanish, as well as rum. New England was one of the largest rum producers in the world, as was Venezuela."

For her drink, she focused on flavors that would have been easily accessible and beloved in her home country at the time of the Battle of Carabobo. Sherry would symbolize the Spanish influence. Rum would represent the demand for it during the war.

"Orange, also, because Spain was a huge center for orange production and export," she says. "Angostura, because it was created by General Simon Bolivar's physician during the war. And, of course, Cherry Heering for its dark cherry and cocoa flavors, which are similar to many fruits native to Venezuela. One of the first times I ever tasted Cherry Heering on its own, I was doing my weekly blind tasting of spirits in our bar. I had a cold at the time and couldn't really smell. I took a sip of Cherry Heering not knowing what it was and was blown away because it was one of the few spirits I could taste, despite my cold. I had one of bartenders add hot water and some scotch and had an incredible toddy."

Her Battle of Carabobo cocktail is a stirred tipple, strained over a single piece of ice in an old-fashioned glass with an orange twist. The base is Santa Theresa 1794 rum with a half-ounce of Palo Cortado sherry. She adds a further equal measure of Cherry Heering and also of Cinzano sweet vermouth. Two dashes of Angostura bitters give a balanced, beautiful finish.

"I wanted to produce a cocktail that reminded me of home," she adds. "When many people think of Venezuela, they think of bright tropical fruits. But, it is also the home of dark rich flavors such as chocolate, coffee."

For Star, the 1821 battle was a worthy year to commemorate her home country and to explore the similar occurrences in her current town of Boston, but she's far from solely tied to this time or to these places. If given the choice, she's time travel to work in Paris, just after WWII.

"I would love to work in some of the old hotel bars of that era and watch as they rebuilt. I would also have loved to meet some of the incredible directors and writers of the era," she offers. And as to her drink style at Drink--it's an ever-evolving global approach, with a focus that's laser-sharp and possibly born from her former foray into chemistry and medical science.

"I tend to pull from everywhere," she says. "A large inspiration for me are sushi chefs. I attempt to emulate their exacting, clean style when making my drinks. I want every movement I make to be for a reason. I also look a lot towards southern France and Morocco for inspiration. I am obsessed with the blending of spices fruit when making drinks. Historically a lot of my cocktail style comes from flavor combinations in South America in the 1950's, when there were still very few large production influences on food and culture requiring everything to be made by hand." 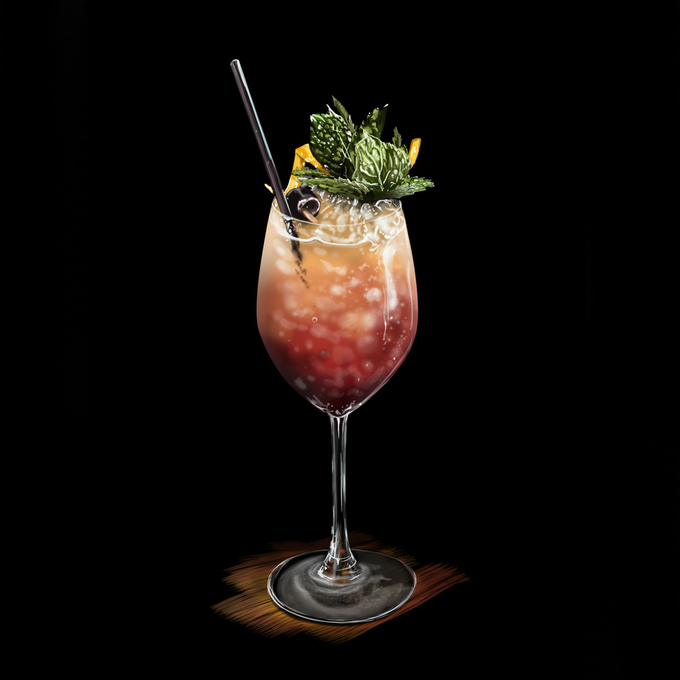 The Battle of Carabobo cocktail