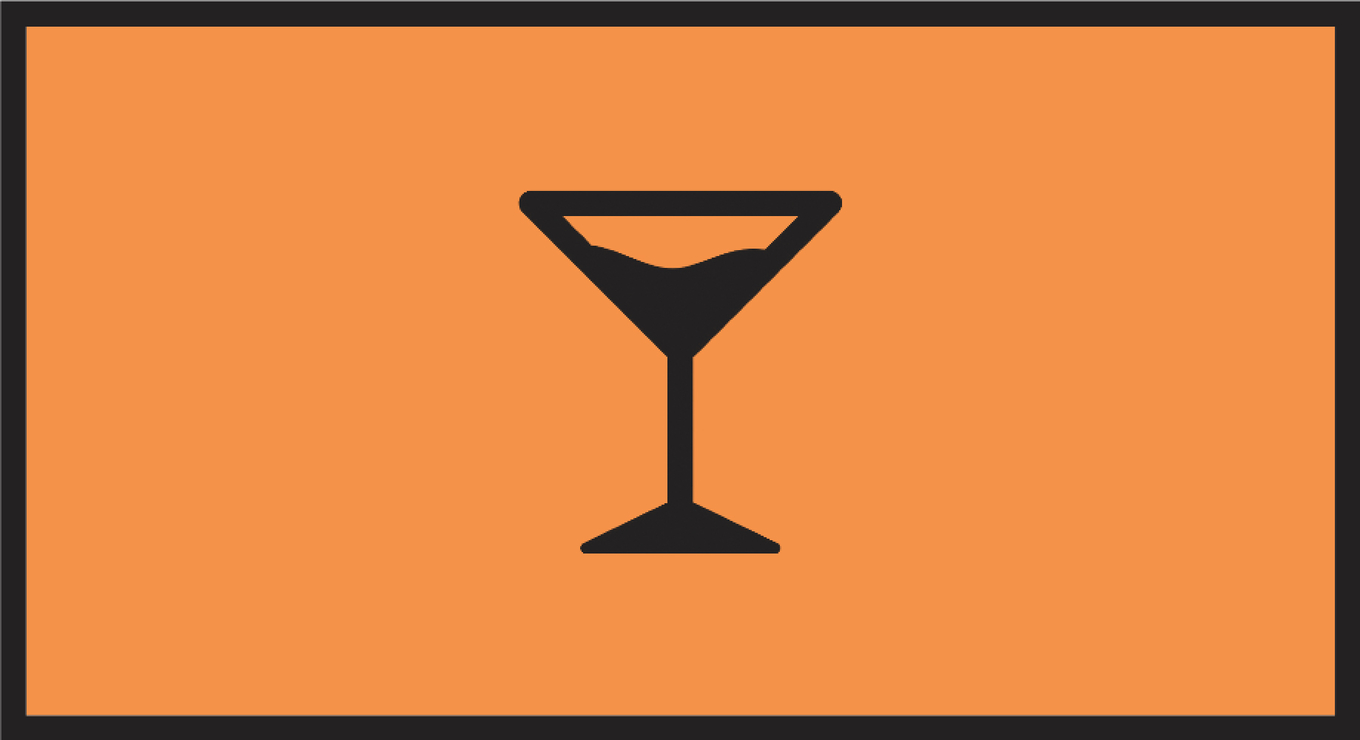 It’s time to talk about acids. As you progress and flourish, it’s only natural to want to experiment, and I’d rather you did so in a safe circumstance with the quality powders, not that stuff Steve is pushing. But, before we enter the kaleidoscope (of learning), let’s think - do you need acid in your life? Or are you doing it because the other cool kids do? Imitation is never cool.

So, real talk. Acid - what is it? Where does it come from? And why do we love it so much, when used correctly? Because I’ll tell you what - acid in the wrong quantities and circumstances ain’t no fun for no one - and, as ever, let’s take the salmon-filleting knife to the bullsh*t and leave it at the door with the Pennywise costume. This mostly refers to individual bartender/venue dogma – the idea that what is natural and what is scientific are at odds and one is better.

The thing is, above a certain point (often being sufficient experience and talent to recognise the benefits of the other side), these are basically brands - a recognisable means of bringing in customers/trade, or advancing one’s career. Bartenders who insist on doing everything the classic way will be all about that freshly-squeezed citrus, while those lauding the benefits of a more science-based approach will be straight on the acids.

This is a handy tool for discussion, for three reasons:

So, a brief bit of history (or nature, if you will). My understanding, which has been constantly paraphrased and perhaps falsely reinforced through frequent telling - and I’ll admit I haven’t revisited the books in a while - is that humanity are lovers, not fighters. That’s not me labelling us altruists or even anything nice, but merely saying that we didn’t become the dominant force on the planet through conquering our predators or competition – it was good ol’ Netflix and chill, with the proverbial double pepperoni ever-present.

For an organism such as us, in its evolutionary infancy, to be able to garner high levels of energy through the consumption of nuts and fruit, was a big thing. This supported the typical outcome of a certain other appetite of ours - sex - and allowed a population explosion, as we didn’t need to rely on conquering other animals in order to feed our young. Fruits were a big part of this - a common attribute of things we consider to be ‘fruity’ are that they’re sweet and sour. In fact, they’re usually pretty balanced there. What makes something sweet? Sugars. What makes some sour? Acids. Basically, we’re evolutionarily obliged to adore lemonade, even on post-mix.

At some point, a truly enterprising member of our ancestry stood up, and, well… that was it. Just stood up, went full bipedal. It doesn’t sound worthy of a lifetime achievement award, but it’s definitely one of the most significant things that happened, historically. It changed everything, starting with the order of importance of our senses. Our noses weren’t floating above the ground, looking for evidence of mates, predators or prey, so that sense of smell (or at least the first kind, orthonasal) dipped in importance, while the distance of our other sensory organs from the ground, producing a height advantage, radically increased the salience of another - vision.

I won’t go much more into vision, but suffice to say that it remains our dominant sense - think; if you’re still reading this article, it must contain information that is at least somewhat new and interesting to you. Funny how no one communicated this to you in person, but through the written word… handy things, eyes.

Over millennia, our sense of smell would deteriorate; it just wasn’t as important to us anymore. However, as our heads experienced Darwin’s corporate restructuring, an emerging department garnered more attention, and eventually, a bigger office space. Retronosal perception, the ability to smell things in our mouths, combined with our ever-impressive brains, increased the importance of not just taste but aroma.

From this comes a statistic oft-cited by people like me, who have a background in neuroscience but now do other stuff for a living - that 80% of what we think of as taste is, in fact, smell. True (and fascinating) as that is, it is flawed in principle - for one, putting a number on something so subjective is clearly dumb (and symptom of how laughably pseudoscientific the nutrition industry is at times), but it also suggests that the 20% is insignificant by comparison.

Well, how about this - go drink a terribly-balanced daiquiri whilst huffing your favourite eau de toilette. It’s a crude lesson - that 20% is vastly more important. In fact, go ahead and make yourself a daiquiri with a decent white rum, citric acid and white sugar (perhaps with a dash of saline, justifiably growing in awareness), balanced well. It’ll taste damn fine. You could even cleverly call it clarified lime in the menu, a touch of artistic licence for which no one will criticise you.

Our palates possess a variety of nerves that sense your fundamental flavours (most notably, sweet, sour, salty & bitter, the ongoing discussion implicit within being something for another article), as well as trigeminal components such as heat, consistency, even pain. Meanwhile, the phenomenal sensory organ that is your nose is conducting an impressive array of pattern recognition exercises, constructing the perception of aroma. Still, the palate’s what makes you go wow, for better or worse.

What am I getting at here? Well, it’s about that branding thing from earlier. You could have a menu which extols the virtues of classical simplicity, or an exploratory offering that derives acidity or sweetness from mysterious sources, or a factual, scientific approach with all the romance of a hatchet wrapped in a subpoena, still giving you something delicious and obstinately straightforward. Many of you could name a few venues which fall (usually intentionally) into these categories.

If a drink is well-executed, it tastes good, but most of us are highly susceptible to descriptives. All the science in the world, or the most esoteric of Antarctic fruits, can have the same impact as the humble lemon. I’m not seeking to undermine the values or images of any bartender, brand or venue, but I also do not believe that education around these elements among bartenders amounts to cynicism.

I wrote previously about how silly it is when bartenders from radically different styles of venue/service criticise one another, and I believe a similar thing is at play here - the best among us, regardless of the apparent conviction in our approaches, acknowledge that there are many ways to skin a cat (vegan alternative available), or balance a rum fix. It’s probably why you don’t see any of the big names squabbling over their competing ideologies - they know. They’ve also probably been mates for a decade, since they met back in World Class 2008.

Ok, so I’ve talked long and hard about nature. Now, a bit of science, and in true methogolical form, it’s gonna be succinct. In fact, here’s a table. 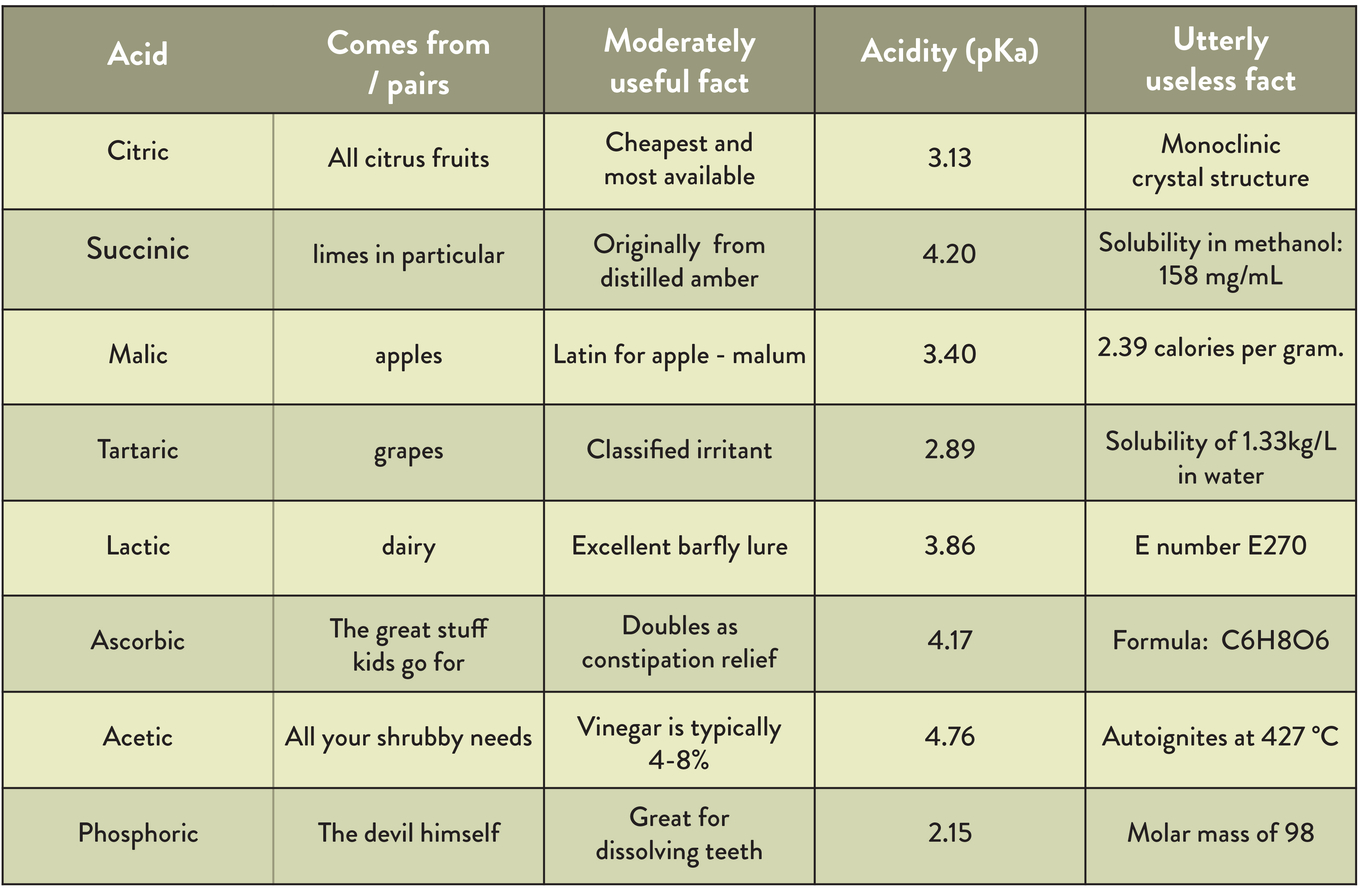 Other useful stuff – the pKa value is basically the strength of an acid – the lower, the stronger. There are many, many other kinds of acid, but they get pretty deadly once you go below Phosphoric up there. Also acids, like the fires of dogmatic discussion, never go out of date. They don’t have as much aroma (basically none) as the fresh products from which they originally came, but there are also no degradable organoleptics, so they don’t really go off.

...Anyone for a Sidecar? Stevia rim, of course.