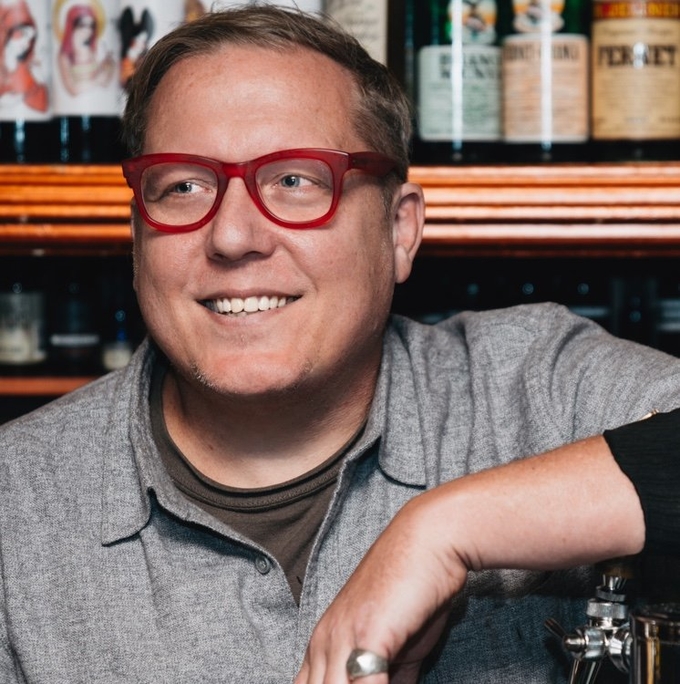 Working in the kitchen before venturing into the glamorous world of mixology has proven to be a bonus for many bartenders. It can provide them with a deeper understanding of flavours, textures and presentations. This is certainly so for Sother Teague who, after graduating from the California Culinary Academy, began his hospitality career working in restaurant kitchens as a chef for 12 years.

His career has been varied - and 'taking a chance' seems to be a motivator. When the opportunity arose to work as the research and technical chef for Alton Brown on the Food Network show ‘Good Eats’, Sother moved to Atlanta. He enjoyed the educational aspect of the program and got hooked on the teaching aspect. And to further that ambition he moved to Vermont to a post at the New England Culinary Institute.

Fate took a hand once again when Sother moved to New York and by a 'happy accident' found himself serving behind the bar as a member of the opening team at Dave Arnold’s Booker and Dax. It was during that time that his culinary prowess stood him in good stead to become a major player in the mixology stakes.

Today, he is the beverage director at Amor Y Amargo in Manhattan’s East Village where he has developed a distinctive style behind the bar as he combines kitchen skills from his culinary experiences and deep understanding of flavours to create masterpieces in mixology.

Which is probably why the bar at Amor Y Amargo is known as a ‘bitters tasting room’ where no juices or syrups are used. Instead the drinks being served are based on exact combinations of spirits, amari, vermouth and bitters. Impressively, the venue boasts an eclectic collection of some 250 tinctures and 110 bitters on its shelves at any given time. His enthusiasm for amaro has made him an authority on all things bitters-related.

Recently he told me of his first experience on reaching New York, “When I first moved to New York, two friends and I went to a bar in the Lower East Side. At the time, one of them always carried his 33mm camera around. He placed it on the bar. I was seated next to a man who had a ball cap pulled tightly down to hide his face but I could sense that the camera was making him nervous.

“Plus, it’s NYC so it was tight quarters, my knee was bumping his. To diffuse the situation, I politely said ‘I’ve just moved to New York’ as I picked up the camera and saw his tension raise. ‘Would you mind taking a photo of my friends and I?’ Immediately he relaxed as he agreed and snapped a few photos of us. I thanked him and we all went back to having our drinks. It turns out, it wasn’t the last time I’d meet “Friends” star, David Schwimmer - he now frequents my bar.”

He is also the co-host at The Speakeasy on Heritage Radio Network. “My cohost, Damon Boelte, and I get to interview our peers, our heroes and the legends in our field. We don’t get paid to do it — we do it because we love it.”

His goals for the future include expanding the business to include another bar and a restaurant.

And his criteria for success?

“The most important thing in a bar is service. Little else is relevant if service is lacking. People are happier and more likely to return to your business if they’re given good service. I’ll take a subpar Manhattan with a smile over an excellent one with a sneer.”

For young people contemplating bartending as a career, he counsels, “I advise young people to choose this career path wisely. There are a lot of shiny and exciting aspects that often overshadow the underlying fact that it’s a difficult profession to pursue. Long hours on your feet and working weekends and holidays are only the tip of the iceberg. I’m very open when asked about my career and I don’t sugarcoat it. I’ve done very well for myself but it’s gruelling work that is relentless.”

As chef and bartender, his most lasting impression is from his days at school. He says, “When I was in culinary school, my mentor was a Frenchman named Pierre. He told me lots of things that I think about to this day. He always talked about the importance of footwear for a chef (or anyone on their feet for their job) and I took that to heart.

"But above all he taught me, I never forget this – ‘If you’re the smartest person in the room, you’re in the wrong room’. It reminds me to always be open and to keep seeking knowledge and if I think I’ve exhausted the trail, to seek the company of new people."

For the Cherry Heering 200th anniversary, Sother picked the year 1885.

“Peter Heering was a grocery clerk in Copenhagen when he first began production of the eponymous liqueur in 1818. But much further along in time, in 1885 Stanislao Cobianchi created his elixir, Amaro Montenegro which he named after Princess Elena of Montenegro.“

Amaro is a handy ingredient for cocktails in a bar like his, where there is no juice.

“I’m well known as a lover of amaro and, my cocktail involves one of my absolute favourites – Amaro Montenegro. Montenegro has been producing their product ‘everyday since 1885’.
This is one we reach for when we want a drink to be juicy and light; it’s a great substitute for juice. It stirs into drinks really well and makes them lighter and brighter, but still brings a nice bitterness."

"Cherry and orange are a natural match. Chocolate is a match for each of them as well. My bicentenary cocktail is a Vin diagram of how the three flavour notes are intertwined. Combining these two historic potables in one cocktail creates a lush, juicy effect that’s evocative of orange blossoms and dark cherry. Combined with light-bodied rum, and accepted by the chocolate bitters, the Heering becomes the star of the show!" 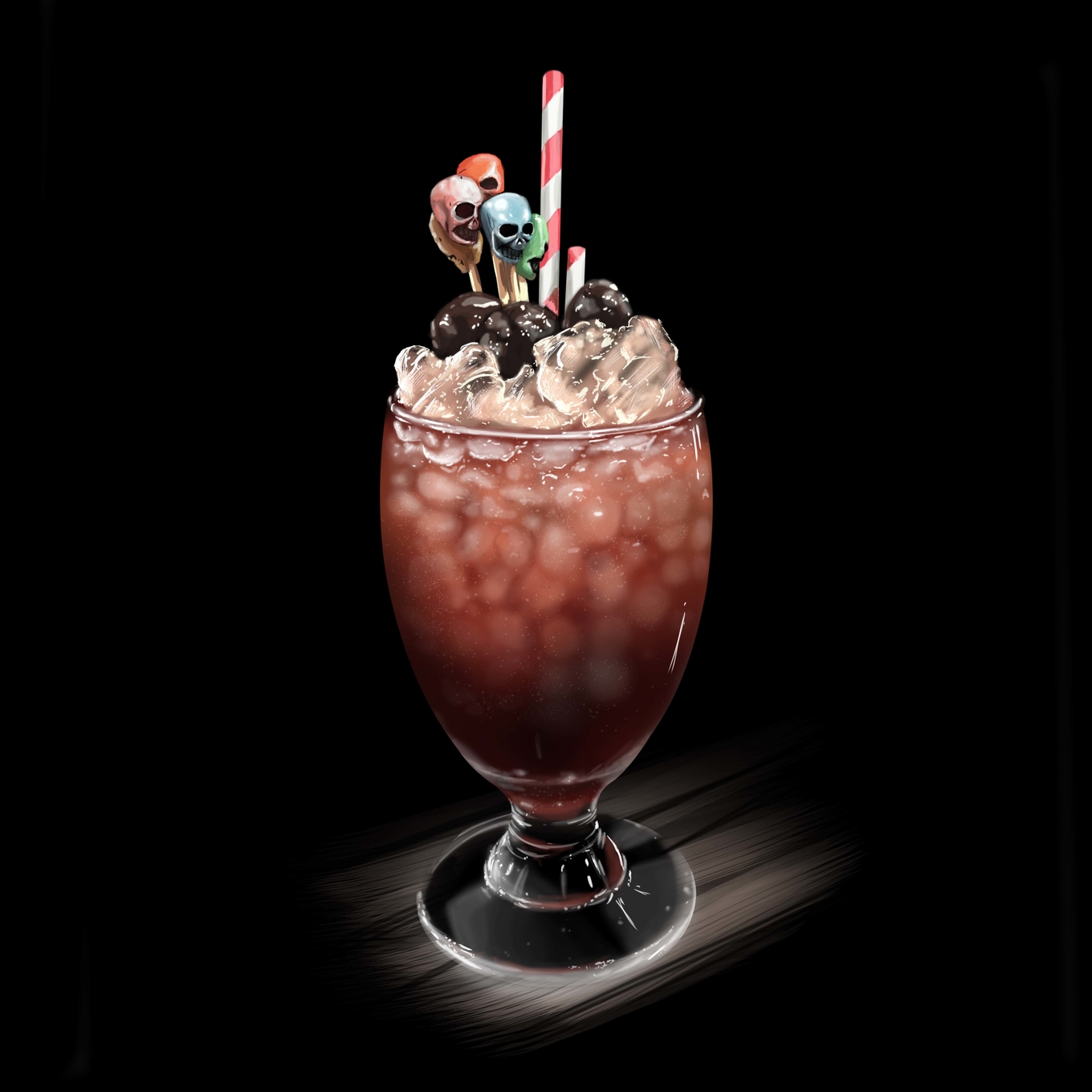 Groceries for the Queen

Garnish: Luxardo Cherry
Method: Whip shake with a few pebbles of ice to chill and aerate. Pour into a glass filled with pebble ice. Top with more pebble ice and garnish with cherries, decorative picks and straws.