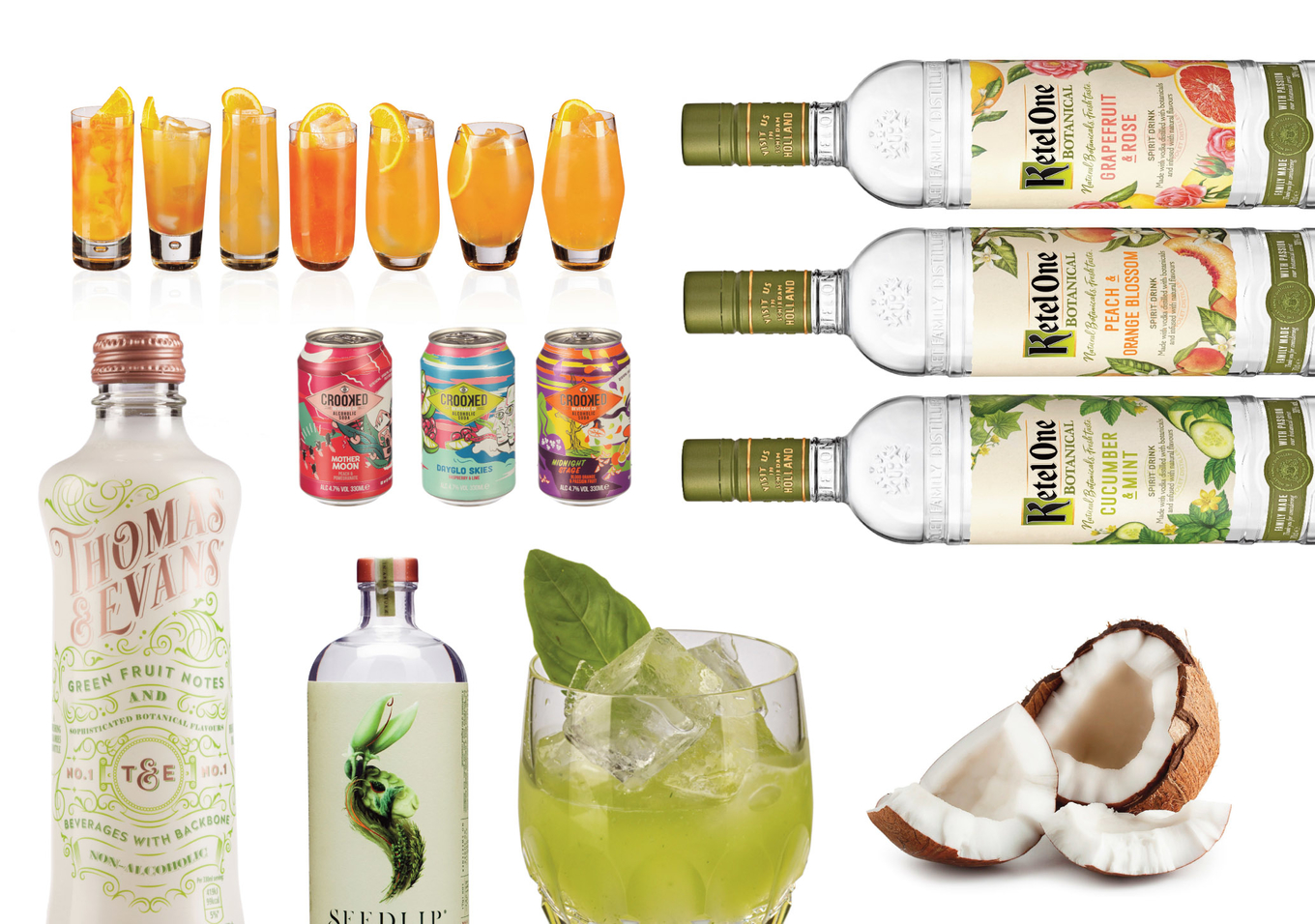 The present gin craze has dominated our media feeds, only interrupted by delusional kill-joys trying to persuade us that gin alternatives, without alcohol but costing the same, taste as good when mixed with tonic (or increasingly soda).

When it comes to marketing, the expression "What goes up must come down" only applies when things rise very quickly. Gradual growth can be, and usually is, sustainable. Blatantly, gin's boom is not sustainable and will collapse. Arguably it already has with sales of many gin brands now only propped up by flavoured vergins (products verging on being gins). Thankfully, the future of newly established gin distilleries looks more secure due to botanical spirits. This, along with a couple of the other trends below, was in my predictions for 2019 and while slower to take hold than I anticipated, it remains the first of my 12 trend predictions for 2020 and beyond.

Many new gin drinkers (in previous years either underage or declared vodka drinkers) don't actually like the taste of juniper. Hence, by default, they don't like gin but drink gin because they perceive it to be fashionable. Hence the rise of pink gin, flavoured gins and vergins.

Enter botanical spirits, made in the same way as gin (re-distilling neutral spirit with botanicals) but without the juniper.

Tellingly, it's not gin distillers that are leading this exciting spirits innovation but vodka producers such as Ketel One whose launch of their botanical spirits in one US state in summer 2018 was so successful that stock had to be airfreighted from the Netherlands to keep up with demand.

Part of what excites me about the aforementioned botanical spirits is that they present themselves honestly with a category name that portrays what they are. I would be equally excited by the plethora of non-alcoholic products masquerading as "spirits" if rather than spirit they called themselves something appropriate – soft drinks or "phantoms" – spirit-like but with no substantial existence.

Whatever they call themselves, this is a drinks category that will continue to grow during 2020 and hopefully, new entrants will stop misrepresenting themselves as spirits, or worse, "non-alcoholic gins". However, their price will fall as new entrants discount to gain market share.

"Low and no" is a term much used by the folk peddling the phantoms above, but even more dramatic than the rise of phantoms is that of low alcohol beers. This has been a mainstream trend over the past couple of years and now pretty much every "craft" brewery produces at least one "table" or "small" beer.

These low alcohol beers may lack the body of "proper beer" but with dry hopping replacing the bite of alcohol they make driving home from the Rose & Crown after a few jars with your mates safe and legal. They also taste a lot better than no-alcohol beers.

The same is true of cocktails - LOW tastes a lot better than NO, so expect to see "table cocktails" sections appear on cocktail menus and perhaps even bars that exclusively serve table cocktails.

My three cocktails to watch during 2020 are:

What was started by Fever Tree has been picked up by the likes of London Essence and Three Cents with premium mixers demanding ever more supermarket shelf and precious bar fridge space. This is not sustainable! Indeed it's bonkers these mixtures of flavoured concentrate, water and carbon dioxide are bottled and shipped across the world when the concentrates could be mixed with filtered water and carbonated at the point of serve.

The twenties will see the return of soda-fountains dispensing a wide range of flavoured tonics and sodas on draught. I also predict the demise of bottled sodas as lighter, smaller and altogether more sustainable cans take over.

The Italians, and to a lesser degree the French, have long appreciated and enjoyed bitter-sweet liqueurs such as Italian red bitters, amari and quinquinas. Here in Britain and in America we have bitter hopped beers. All these have gone global in recent years as previously sweet-toothed palates move towards more bitter flavours. This bitter trend will continue to grow in through the twenties, but what bittersweet cocktails will join the Aperol Spritz and Negroni? A Rabo de Galo perhaps?

We're apparently nuts about coconut. I've noticed coconut products such as dairy-free yoghurt filling the supermarket shelves and coconut appearing more in cocktails – be that coconut rum, coconut water or cream of coconut. Coconut water is the new cranberry juice. Even the Piña Colada is fashionable again while rum & coconut water looks set to be one of the key long-drink serves during the twenties.

Cognac watch out, the Californians are coming! Californian brandy already enjoys huge market shares in its domestic market but has so far barely dented sales of French, Spanish and Italian brandies in Europe and Asia. The Napa Valley will become as pervasive in brandy as Silicon Valley is in tech with lighter and fruitier Californian brandy usurping old-school cognacs and appealing to younger drinkers. Forward-thinking Cognac houses such as Camus have already moved to produce more aromatic fruitier cognacs.

Rum is said by many to be the next big thing but I think this is mainly benefiting flavoured/spiced rums. Meanwhile, folks in Scotland and Kentucky will laugh when I say localism will help drive whisk(e)y sales but the many boutique distilleries who have been pertinently waiting for their first whiskies to come of age will soon be rewarded as folk strive to buy local.

Whiskey will also be helped by continued growth of whiskey & soda highballs due to its lack of sugar yet pleasing flavour. Demand from emerging markets such as India and China will also play their part in whiskey's assurgency.

There are more laptops and tablets on the tables of your average coffee shop than packs of sugar. More of us work from home or away from the office and fix both our coffee dependency and need to escape the same four walls by working in a coffee shop from time to time. The morning and afternoon trade enjoyed by such places has been missed by most pubs and bars. However, increasingly bar operators are maximising returns on their property overheads by opening all day with menus, lighting and atmosphere morphing as morning turns to afternoon, evening and then late-night drinking. This trend can be seen playing out from English country gastropubs to the excellent Senios bar in Athens, Greece. Serving afternoon tea will soon be commonplace in pubs and bars.

We've had alco-pops, RTDs (ready-to-serve drinks) and PPSs (premium packaged spirits) and now we have hard seltzers – basically alco-pops but packed in a can rather than a bottle. We are also seeing a rise in ready-to-serve cocktails and these convenience-led products are here to stay. However, expect to see packaging innovations such as cans where the whole lid peels off to become a glass and hard seltzers presented in more appealing packaging than mere long white tubes.

Whether settling down to spend a night with Netflix or with friends over a dinner party, drinking at home is growing faster than drinking out. While cocktails have also grown in popularity, so far in the home they have struggled to compete with the convenience of beer, wine and simpler mixed drinks. However, the traffic we enjoy on this website and the sale of cocktail books indicates that this is changing. Folk used to tackling complicated cooking recipes find mixing three or four ingredients with ice to make a cocktail comparatively quick, simple and more enjoyable.

As the trend for making cocktails at home grows, along with the return of retro cocktails (see above) so we could see 1970s/80s-style home cocktail bars once again become features in many living and dining rooms.