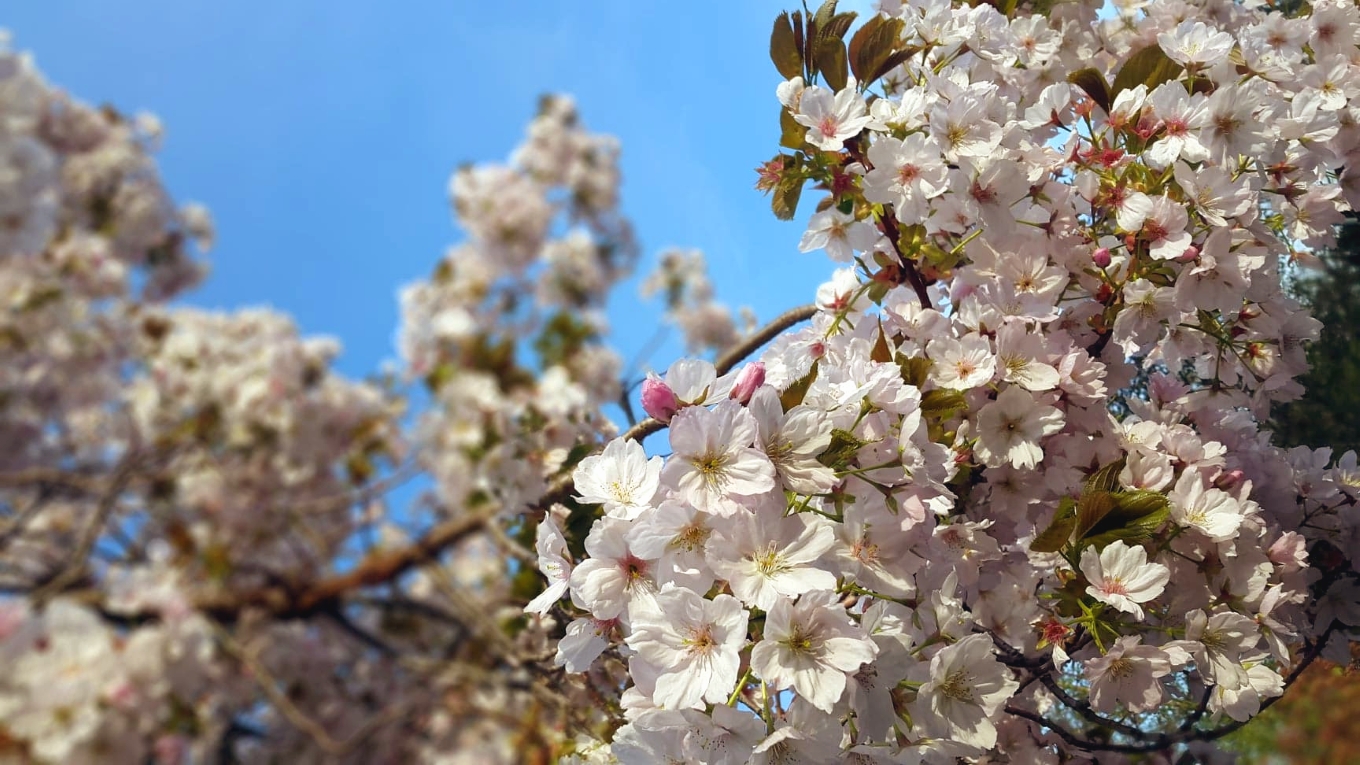 Cherry blossom has a uniquely floral and almond flavour with a hint of cherry, and the blooms look stunning garnishing a cocktail. The flowering season is brief, from March to May, with trees blooming for just a few weeks. The ephemeral nature of cherry blossom and its delicate beauty has made it a symbol of the beautiful transience of life in Japanese culture where it is particularly revered.

Several Prunus plant species produce edible cherries, but hundreds of ornamental cherry, or flowering cherry tree varieties have been bred for their delicately-scented and showy single or double flowers in shades of pink or white. The flowers of both ornamental cherry varieties and the wild cherry can be used as a flavouring.

The true wild cherry tree (Prunus avium), also known as sweet cherry or gean, is native to woodland and hedgerows, mainly in Europe, but also parts of Western Asia and North Africa. Often planted in parks and gardens, it is widely cultivated elsewhere and has naturalised in North America and Australia. 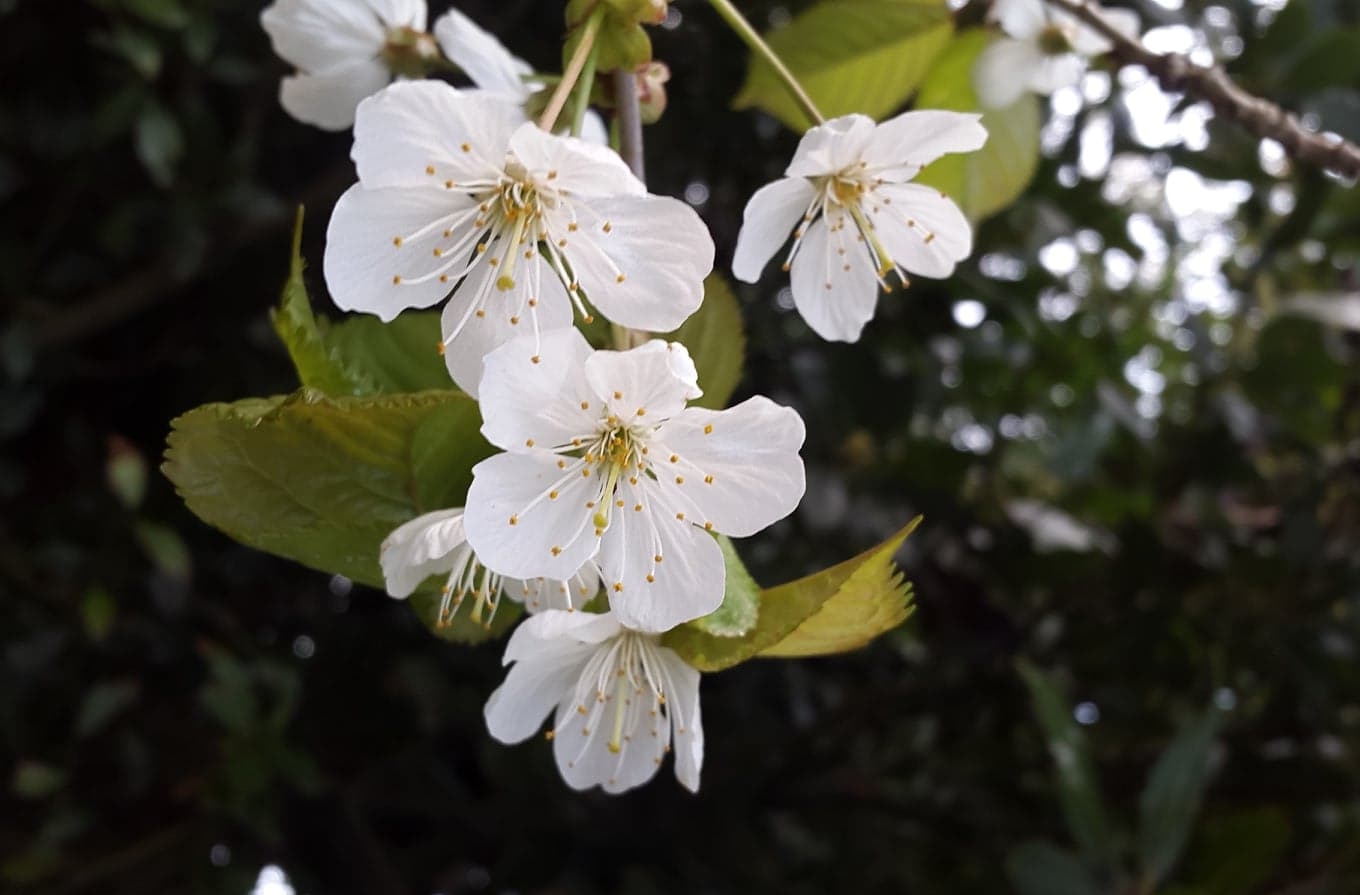 Wild cherry flowers are white and cup-shaped with five petals, measuring up to 15mm across and held in clusters of two to six flowers on long stalks. The leaves are oval, green and toothed with pointed tips, measuring up to 15cm long with two small, red knobs (or glands) on the stalk at the leaf base. Cherry tree bark is smooth, shiny and reddish-brown with horizontal lines when young, becoming rougher and greyer with age.

Not all cherry tree relatives have blossoms which are considered edible. The small, white flowers of the evergreen shrub cherry laurel (Prunus laurocerasus) which are held in clusters on single spikes, are not treated as edible.

Cherry blossom is so much a part of Japanese culture that they have a name for admiring cherry blossom in spring, 'hanami' (hah-nah-mee). In Japan, cherry blossom, known as 'sakura', is used to flavour various foods from sweets and desserts to tea and liqueurs.

Cherry blossom is used as a gin botanical in the Japanese Roku gin, other gins taking their inspiration from Japan include Burleigh's London Dry (Pink Edition) and Jinzu. Raw petals have a bitter almond flavour, and with the prolifically flowering ornamental varieties, it's easy to harvest enough flowers to make a delicious spring syrup, infusion or garnish. 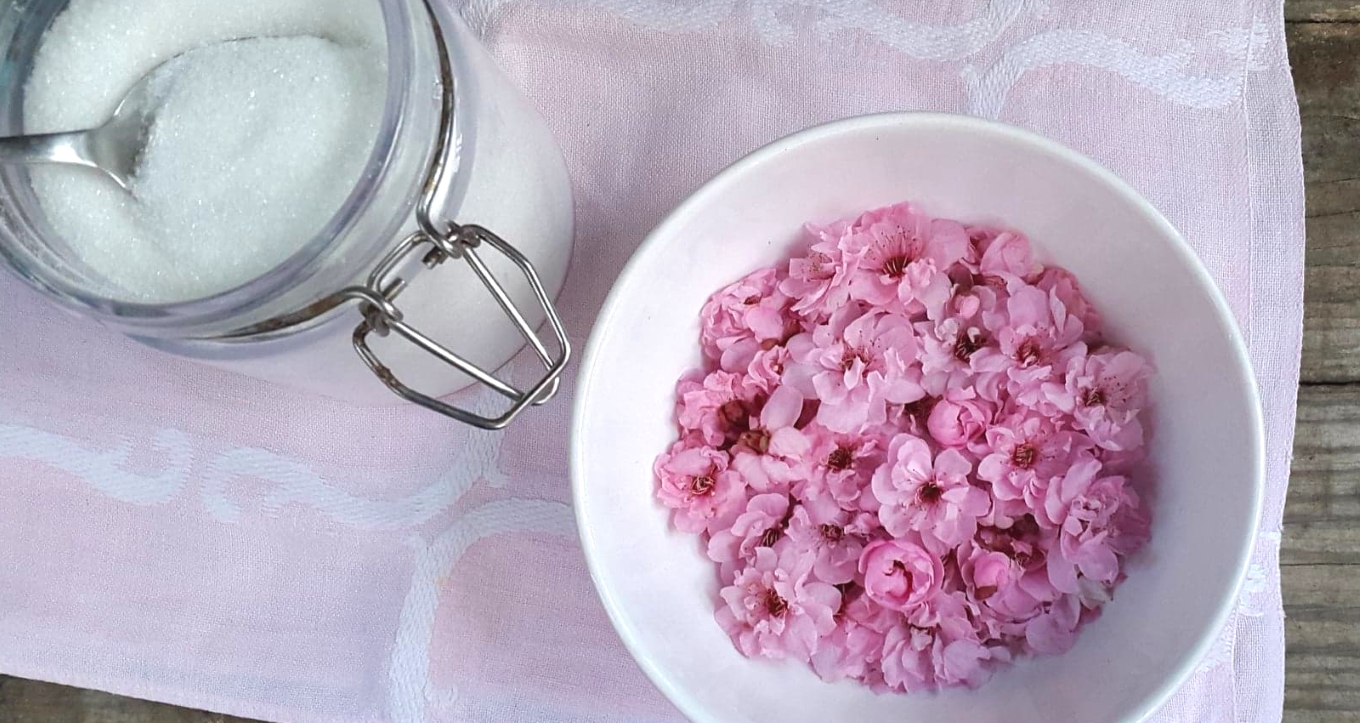 Treat cherry blossom syrup like a more subtle maraschino or orgeat. It has a distinct flavour without being overpowering: rich, floral and honeyed with almond notes and a hint of fruitiness.

To make a simple syrup, take a handful of clean, fresh cherry blossoms with the stalks removed. Add enough hot water (just off the boil) to cover the blossoms in a dish, cover and leave to infuse for 24 hours. Strain the liquid through a fine sieve, muslin or paper filter into a small pan and add the same quantity of white sugar. So 500g sugar for 500ml of liquid. Gently heat the liquid to dissolve the sugar, bring to the boil and simmer for 3 to 5 minutes. Funnel into a sterilised bottle and seal. Once opened, store in the fridge and consume within 2 months.

To flavour gin or vodka, infuse a handful of clean, fresh cherry blossoms in your chosen spirit for a couple of days - pink blossoms seem to have a stronger flavour. Then fine strain or filter and add sugar or syrup to taste, if preferred. Ageing for at least three months mellows the flavour. 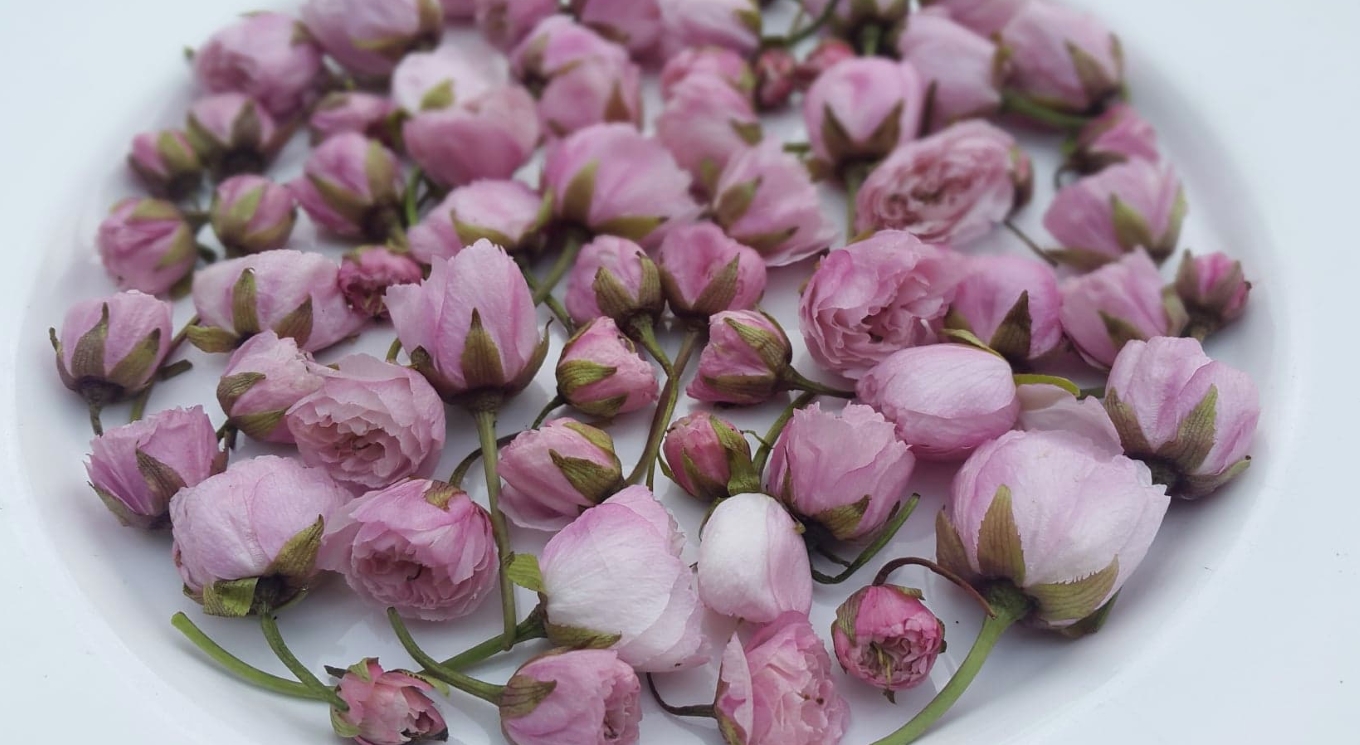 Flower buds can be preserved Japanese-style as 'sakura' by salting, pickling in plum vinegar and drying. Or to candy the petals for use as a garnish, paint whisked egg white on both sides, sprinkle with caster sugar and leave to dry.

It's advisable just to eat cherry blossoms in small amounts, particularly raw. Like apple pips, sloe stones and apricot kernels, cherry flowers, leaves, twigs and bark contain cyanogenic compounds which break down when chewed or crushed to release cyanide. However, the concentration reduces as flowers are processed by cooking, fully drying, etc. Don't use flowers that may have been sprayed with chemicals or from next to a busy road. 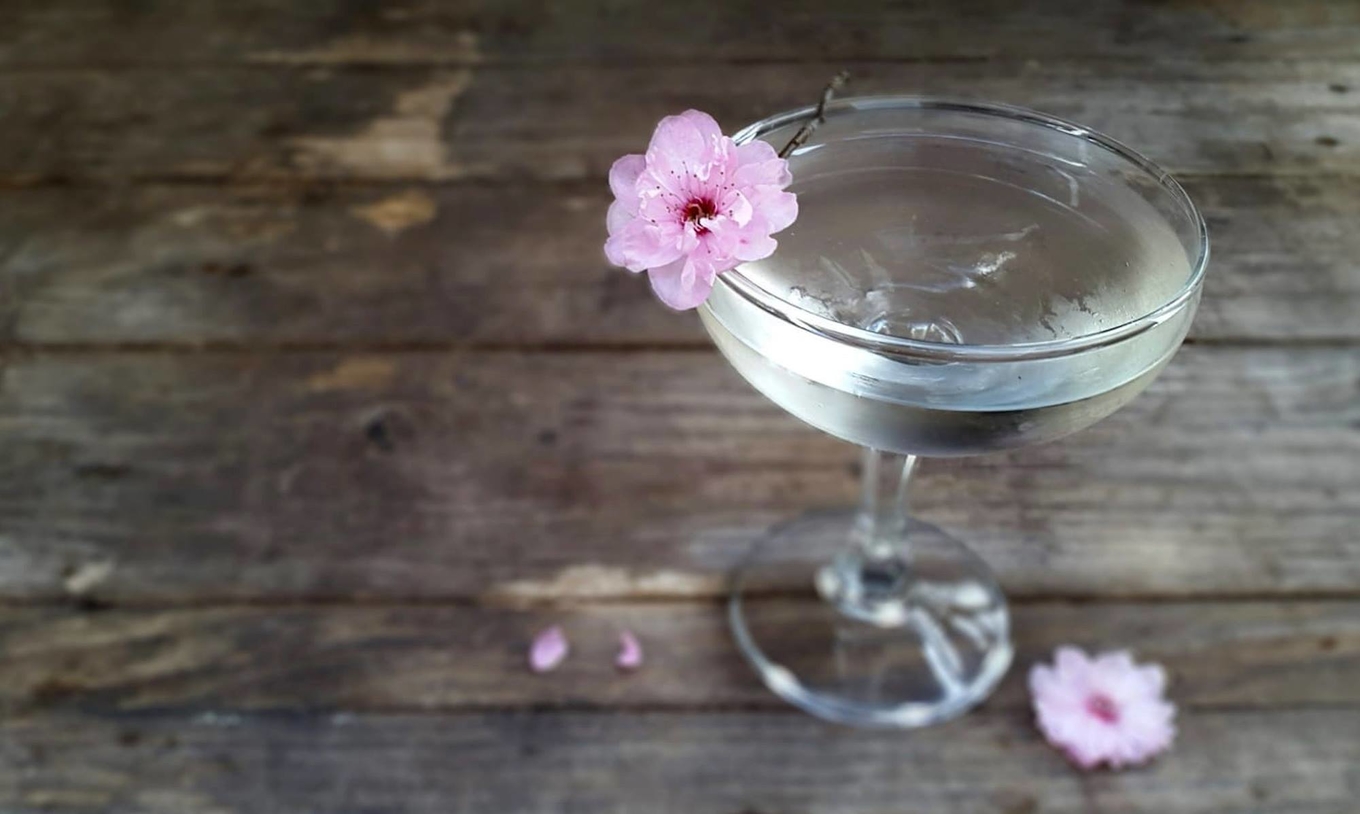 Dry shake ingredients without ice, shake with ice, fine strain and pour over ice. Garnish with a fresh or candied cherry blossom.