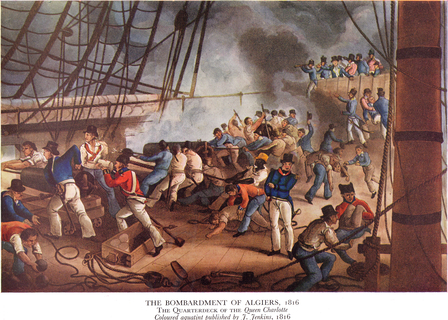 Britain boasted the largest and most powerful navy, enabling a small island nation to build a huge empire. Rum and gin were staples on-board Royal Navy ships. Today, computerised warfare has dramatically reduced onboard liquor consumption but it remains common to see brands of rum and gin labelled "Navy Strength". But what is Navy Strength? And what is the difference between this and "Overproof"?

Prior to 1816, there was no accurate way to measure the strength of a spirit, so pursers in the British navy (then known as pussers) would test the alcoholic strength of their rum ration by using a rule-of-thumb method: a few grains of gunpowder were added to pure rum and the mixture heated by concentrating the heat of the sun's rays through a magnifying glass. If the mixture just ignited it was proof. Too weak and it would fail to light. If it was overproof then it would go up with a bang.

Ensuring the high strength of the alcohol not only protected the navy from being overcharged for watered-down rum but also ensured rum-soaked gunpowder remained explosive. This was crucial as casks of rum and gunpowder were stored in close proximity, so should stormy seas or extremes of battle cause one or more of the many casks of rum on board to spill their contents and drench nearby gunpowder, then, so long as the rum was overproof its fire-power would be unaffected.

Navy Strength and Proof (and so overproof) defined

In 1816, proof became more closely defined when Bartholomew Sikes invented an accurate hydrometer, which measured 100 proof at just over 57% alcohol by volume (57.142857% to be exact). Sikes' new scale was adopted in law in 1818 and it defined a 100-proof spirit as 4/7 the alcohol purity by volume. Or to put it another way, to convert the percentage of alcohol by volume (alc./vol.) to degrees proof spirit, multiply the percentage by 7/4, or 1.75.

However, the Navy had other ideas and, after Sikes' hydrometer was invented, conducted its own tests to establish the strength their rum should be issued at. They collected 100 samples of rum diluted to proof using the old gunpowder test and then measured the proof of each sample using one of the new hydrometers. The average was 95.5 on the Sikes scale, which equated to 54.5% alc./vol., thus this strength was adopted as standard Navy Strength.

This measure stayed in place until 1 January 1980, when the United Kingdom adopted the alc./vol. standard to measure alcohol content, as prescribed by the European Union, (according to the recommendation of the International Organization of Legal Metrology) measuring alcohol strength as a percentage of alcohol by volume at a temperature of 20°C. The law was itself essentially a direct manifestation of the Gay-Lussac scale, which measures ethanol as a percentage - rather than in degrees - of total volume.

So the true British Navy Strength is 54.5% alc./vol. and those brands of spirits labelled as "Navy Strength" but at the higher 57% alc./vol. strength have confused English Proof with Navy Strength, but at least their gun powder will safely ignite.

Confusingly, rum, or indeed any other spirit, can also be considered "overproof" at pretty much any strength above 50% alc./vol.. e.g. Wray & Nephew, the best-known brand of white overproof rum is 63% alc./vol.. This is due to the United States system where proof is twice the percentage of alc./vol. (double the percentage of alcohol contained in a solution at 60°F or 15.6°C). Hence 50% alc./vol. equates to a 100° proof spirit and Wray & Nephew, at 63% alc./vol., is 126° proof.

Also see Navy rum: The story of the admiralty blend and its rationing...