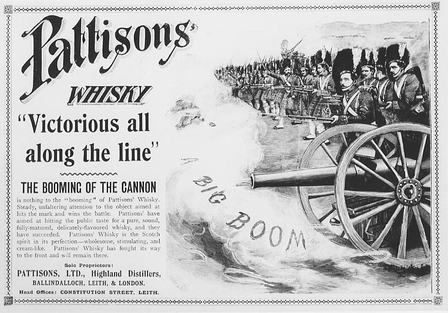 The Pattison Crisis is a cautionary tale and one which dramatically affected the Scottish whisky industry. Originally dairy farmers in Edinburgh in 1880s, brothers Robert and Walter Pattison were among those who recognised an opportunity in the flourishing whisky trade thanks to France's vineyards having recently been devastated by phylloxera so crippling cognac production.

Trading cows for spirits, Robert Pattison began the brothers' blending company in 1887 and went public with it two years later. When the company was first floated on the stock market the family made a staggering £100,000. Going from strength to strength the enterprise lasted until 1896 when Robert and his brother Walter turned from blending to distilling and launched their brand of whisky.

They achieved spectacular success, acquiring half the shares in Glenfarclas distillery and substantial interests in Oban and Aultmore distilleries. Branching out, they purchased Duddingston Brewery and invested heavily in advertisements, well beyond what anyone at the time was doing - £20,000 in 1897 and a staggering £60,000 the following year. Their campaigns went worldwide and the resulting brand awareness continued to woo investors. In one stunt they gave out 500 African Grey Parrots to licensed grocers, all of which, so the story goes, chanted "buy Pattisons' Whisky".

Investors and banks were offering huge overdrafts to the brothers and whilst the boom continued the credit stretched on. The brothers began to enjoy lavish lifestyles, purchasing country manors and vast offices. A favourite way to gain press attention during this time was to turn up on the platform in Peebles or Galashiels, where they owned property, just missing the train. They would then hire a private and outlandishly expensive train to whisk them into Edinburgh for their important meetings.

Unfortunately for the Pattisons, much of their success was based on credit. They had also been selling stock and buying it back at inflated prices as well as paying dividends from capital and over-valuing property. During the whisky boom their dubious business practices went, if not unnoticed, at least unheeded by others who were also trying to get rich quickly too.

Whisky began to be over-produced, going from an annual stock of two billion gallons to 13 billion. The whisky industry moved into downturn and that was followed by an inevitable crash at the end of 1898. Nine companies and several smaller suppliers were caught up as the Pattisons' business unwound, ending with creditors claiming £743,000.

Three years later, the brothers appeared in court on charges of fraud and embezzlement. It was also established that they had been selling cheap whisky, mixed with a small amount of fine Scotch, as "Fine Old Glenlivet". Found guilty of the charges Walter was sentenced to prison for eight months whilst Robert received eighteen. 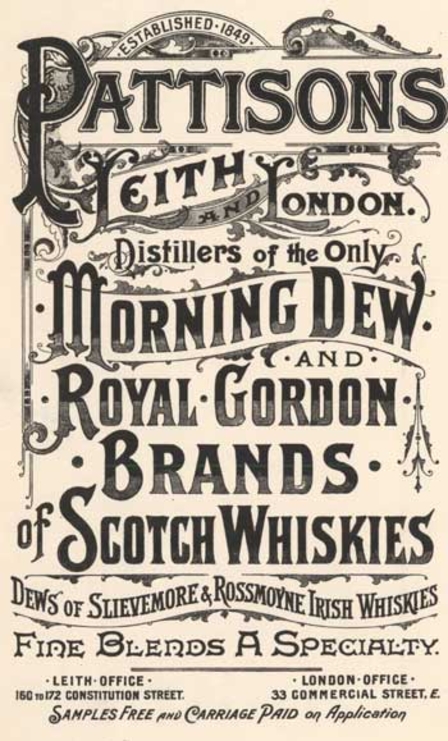 ... comment(s) for The Pattison Crisis