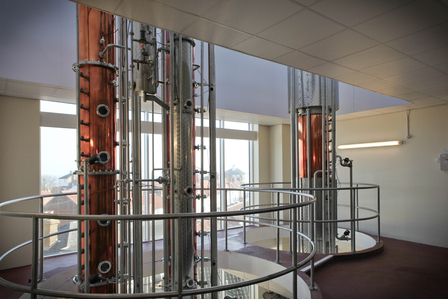 Distillation does not produce alcohol, it merely concentrates it. To produce a distilled spirit you need to start with an alcoholic liquid ('wash') to distil your spirit from. The majority of vodkas and all whiskies are distilled from a wash which is essentially beer made by fermenting cereal grains.

Potable (a fancy word for 'drinkable') alcohol is a liquid called ethanol. And because ethanol alcohol boils at a lower temperature than water the two liquids can be separated by evaporation. So by heating the wash in an enclosed environment (the still) and capturing the alcohol vapours emitted it is possible to concentrate the alcohol by boiling it off from the water which is left behind as it needs more energy before it can evaporate.

This process is complicated by the fact there are different types of alcohol and other chemical compounds present besides ethanol, all with different boiling points. These are collectively known as congeners and these chemicals give spirits character and flavour. Some congeners are desirable in small quantities, others should be removed as completely as possible during distillation.

In vodka production more of these congeners will need to be removed than if you were making a less pure, more characterful spirit such as tequila or cachaça, or a spirit that will undergo a prolonged maturation process such as cognac or whiskey, as evaporation during aging process will facilitate the removal of some congeners while others are softened by interaction with the wood.

Ethanol alcohol, the potable alcohol which the distiller wants to capture has a boiling point of 78.2˚C. Other, less tasty and often harmful congeners have boiling points that are slightly higher or lower than Ethanol.

During the distillation process the first vapours to boil off the water are the more volatile alcohols, those with the lowest boiling point. These are variously known as 'heads' or 'foreshots' depending on the part of the world you are in and the product being distilled.

Next comes the desirable ethanol alcohol, usually described as being the heart. By diverting the flow of spirit emerging from the condenser the heads can be discarded and the heart separated and saved.

As the alcohols with the lower boiling points have now evaporated, this leaves water, proteins, carbohydrates and less volatile alcohols with higher boiling points, better known as 'tails', or 'faints'. The still will be run to separate these less volatile alcohols from the watery wash until the liquid left in the still is around 1% alcohol by volume. It is not economical to further separate the little remaining alcohol and the 'pot ale' left in the still will be sent for processing or simply spread over fields as fertiliser. The tails and sometimes also the heads will be retained and added to the wash of the next distillation so recycling any trapped ethanol.

One of the skills of a distiller is judging the right moment to "cut" the stills outflow from heads to hearts and hearts to tails. The smaller the percentage of heart so the greater the purity of the heart but this means sacrificing more valuable ethanol.

Also known as 'foreshots', these are volatile (low boiling point) alcohols given off at the start of distillation and include the following chemical substances:

Acetaldehyde (CH3CHO) is an aldehyde produced by plants as part of their normal metabolism. It is also produced by the oxidation of ethanol. Acetaldehyde has a boiling point of 20.8˚C and is believed to be a major contributor to the severity of hangovers. It has a pungent fruity odor reminiscent of metallic green apple.

Acetone ((CH3)2CO) is a colourless, flammable liquid with a boiling point of 56.2˚C. It is the simplest form of a group of substances known as ketones. Indeed, the word ketone derives its name from Aketon, an old German word for acetone. Acetone commonly used as a cleaning solvent and is the active ingredient in nail polish remover and as paint thinner. Thus when you smell nail polish remover in a spirit it is usually Acetone that you are smelling.

Esters are naturally occurring chemical compounds responsible for the aroma of many fruits, including apples, pears, bananas, pineapples and strawberries. Esters are most commonly formed by condensing carboxylic acids with an alcohol and their presence in a distillate can contribute fruity aromas. Esters have inoffensive, often sweet odours so are considered desirable by most distillers.

Esters include ethyl acetate (boiling point 77.1˚C), ethyl butyrate (121˚C), ethyl formate (54˚C), and hexyl acetate (171.5˚C). Although Acetate esters have a low boiling points, Acetate hangs around in the still as its molecules act as if they need a lot of room to escape.

Methanol (CH3OH often abbreviated MeOH), also known as methyl alcohol, wood alcohol, wood naphtha or wood spirits is a colourless, volatile and highly flammable liquid with a boiling point of 64.7˚C. Methanol and ethanol (drinking alcohol) are like brothers and sisters and their molecules cling on to each other so despite their different boiling points they are notoriously hard to separate during distillation. However, it is imperative that Methanol is separated and discarded as it is very bad for the liver and consumption is likely to lead to blindness.

Pot still distilled spirits such as malt whisky may contain 4 to 5 parts per million and at these levels its presence is safe. However, as little as 10ml of methanol can cause permanent blindness by destruction of the optic nerve and 30ml of methanol is likely to be fatal.

European regulations stipulate that the methanol content in vodka "shall not exceed 10 grams per hectolitre of 100% vol. alcohol."

The heart (or spirit)

The substances which make up the other parts of the distillation have an unpleasant odour or taste and often are harmful to human health. The main substance found in the 'heart' of a distillation is Ethanol, although trace quantities amounts of other compounds in the heads or tails may also be present depending of the purity obtained during distillation.

Ethanol (C2H5OH), also called ethyl alcohol, pure alcohol, grain alcohol, or drinking alcohol, is a volatile, flammable, colourless liquid. Due to its powerful effects of the human central nervous system and resulting in changes in mood and behaviour, it is also one of the oldest recreational drugs.

Ethanol is the main type of alcohol found in alcoholic beverages but it has a myriad of other uses - even in thermometers. As a solvent it has been used since medieval times to harness the flavour and perceived health giving properties of botanicals to make early remedies and digestives. Being a solvent that is safe for human contact or consumption (in moderate quantities) makes ethanol an important component in modern day medicines, scents, flavourings and colourings. Chemical processes use ethanol as a solvent and a feedstock for the synthesis of other products. It is also a valuable renewable fuel capable of powering internal combustion engines.

For such a versatile and useful compound, ethanol is remarkably easy to make and its production by the fermentation of sugar is one of the earliest organic reactions used by humanity. Ethanol has a boiling point of 78.2˚C making it easy to separate from water by distillation.

Also known as 'faints' these alcohols and other substances have low high points and are given off at the end of distillation.

1-Propanol (CH3CH2CH2OH) is formed naturally in small amounts during the fermentation process and has a boiling point of 97.0˚C. It is used as a solvent in the pharmaceutical industry and is one of the alcohols distillers refer to by the pejorative term 'Fusel Oils'.

Butanol alcohol or Butyl alcohol (C4H10O) occurs naturally as a result of fermentation of sugars and other carbohydrates so is common in beer and wine. Butanol has a boiling point of 118 °C and is one of the group of 'Fusel Oils'. Butanol has a banana-like solvent odor.

Amyl (Isobutyl Carbinol) alcohol is colourless liquid with a boiling point of 131.6 °C. It has a strong smell and a sharp burning taste and is another of the group of alcohols known by the pejorative term 'Fusel Oils'.

Fusel alcohols, also known as 'fusel oils' is a collective term for the bitter compounds found in the tails during distillation. Comprising of propanol, butanol and amyl alcohols (furfural not an alcohol but is sometimes also included in the pejorative term). Fusels are higher-order alcohols, alcohols with more than two carbon atoms and significant solubility in water. Fusels are formed by fermentation so are present to varying degrees in beer, wine, cider, mead and other fermented beverages and the spirits distilled from them. The term 'fusel' is German for 'bad liquor' and these alcohols have an oily consistency, hence they are popularly termed fusel oils.

Acetic acid (CH3COOH) is an organic acid produced during fermentation and it is Acetic acid that gives vinegar its sour taste and pungent smell. It is a colourless liquid that absorbs water and boils at 118.1˚C and is one of the simplest carboxylic acids.

Furfural (OC4H3CHO) is an aromatic aldehyde derived from corn, oats and wheat bran. Its name comes from the Latin word 'furfur', meaning bran, referring to its usual source. It is a colourless oily liquid which when exposed to oxygen quickly becomes yellow. It has a burnt, bad almond smell. Indeed, it often occurs in direct fired stills as a result of charring. Furfural does not like water so although it has a high boiling point (161.7 °C) it strives to vaporise during distillation earlier than would be expected. Furfural smells of almonds.

... comment(s) for Distillation - The science of distillation