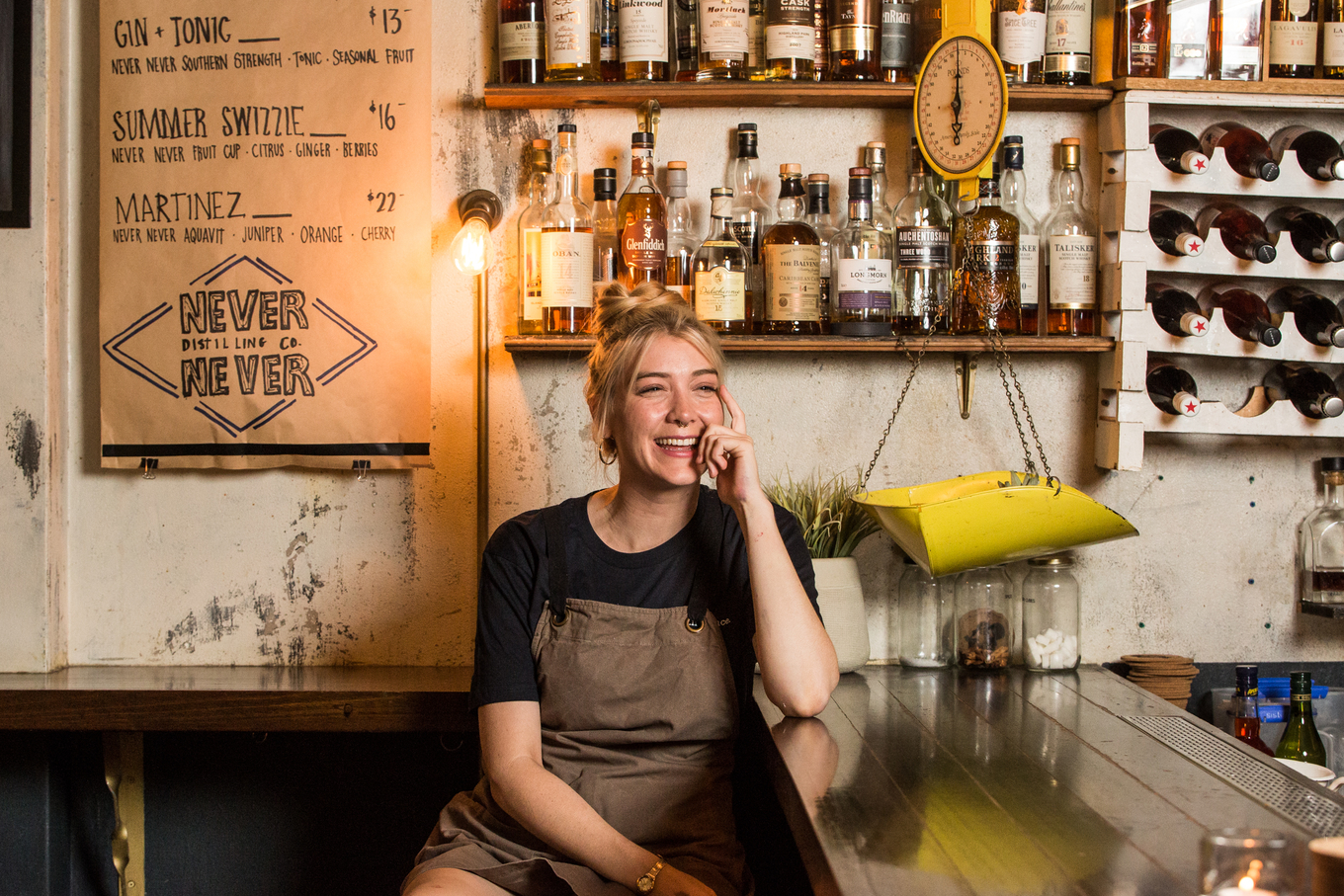 Paige is the kind of industry person whose birthday is mentioned across the entire city. I know because that's how I first heard of her. I've no idea how her actual birthday was from her point of view (hopefully fun) but that night when I popped my head into a few Sydney bars it was mentioned at each venue. Tonight is Paige's birthday so it's going to be a big one, didn't you know?

Well I didn't, so more fool me.

It turns out Paige shouldn't be just known for her remarkable ability to captivate an industry by ageing though. Instead this previous Bartender of the Year, 30 Under 30 in The Arts for Asia, founder of Coleman's Academy and Bulletin Place bartender has many more talents, the biggest of which seems to be facing her fears head on.

Coleman's Academy, for any Difford's readers outside of Australia, is a nonprofit educational platform dedicated to helping females in this male-dominated industry. Its sessions, which usually feature two industry heavy-weights talking about their careers and perspectives before being opened up to the floor for questions, are girls-only. As Paige has said time and again to the complaints of men with FOMO, it works because you're not there.

"I know people have an issue with it," says Paige. "When you create something you hear the whispers, but no one ever approaches you directly about it having an issue. The idea of Coleman's has taken on a life of its own – and some men think we sit around in robes and bitch about them. Well, we don't." 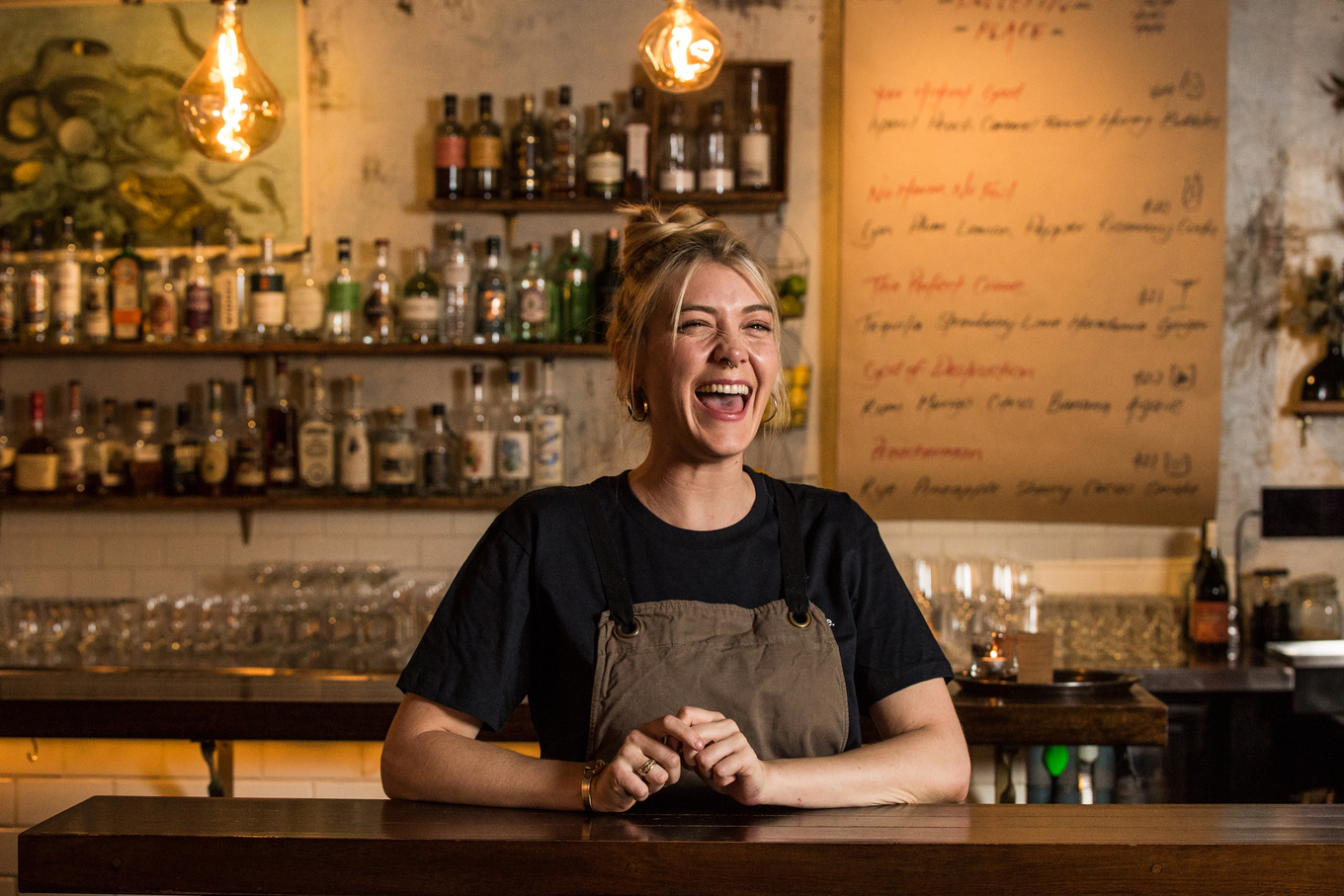 Paige founded Coleman's in 2015 when she admits she was not having a brilliant time. She's pretty open about struggling with mental health issues, primarily anxiety, and was searching for something outside of work to direct her energy into.

"I like community involvement and giving back so I started to think about the things I'm good at and feel like I could do," she says. "I love the women in our industry and feel like there should be more of us in more prominent positions. We should be looking at entry level bartenders and making sure they know this is a career and this is viable. I thought about myself in my early 20s and what did I want? Back then it felt like it was just men talking to men, it wasn't engaging to me at all."

Initially the platform started with a work education element, with brand reps coming in to talk spirits, followed by prominent women talking about how they charted through the industry's male waters and where they landed, as well as the struggles along the way. But story time proved to be most popular and so that's what Paige stuck with. Since its foundation, Coleman's Academy has given Australian female hospitality staff the space and the time to voice their questions, their concerns and their own stories, without fear of patriarchal judgement.

"It just took off, it was great, after two years in Sydney I decided to take it nationally, which was big," says Paige of the academy's four state tour.

The sessions have always drawn huge numbers but their success hasn't made it a smooth road for Paige, who says each and every event cripples her with anxiety that it won't go well and no one will turn up. The fact she's kept it running is a huge testament to her ability to see something through, despite the fear.

Coleman's may have an enormous presence in the Sydney hospo scene, but it is also very much Paige's side project. She also has a fulltime job as a bartender, a career she's been working on since leaving high school. 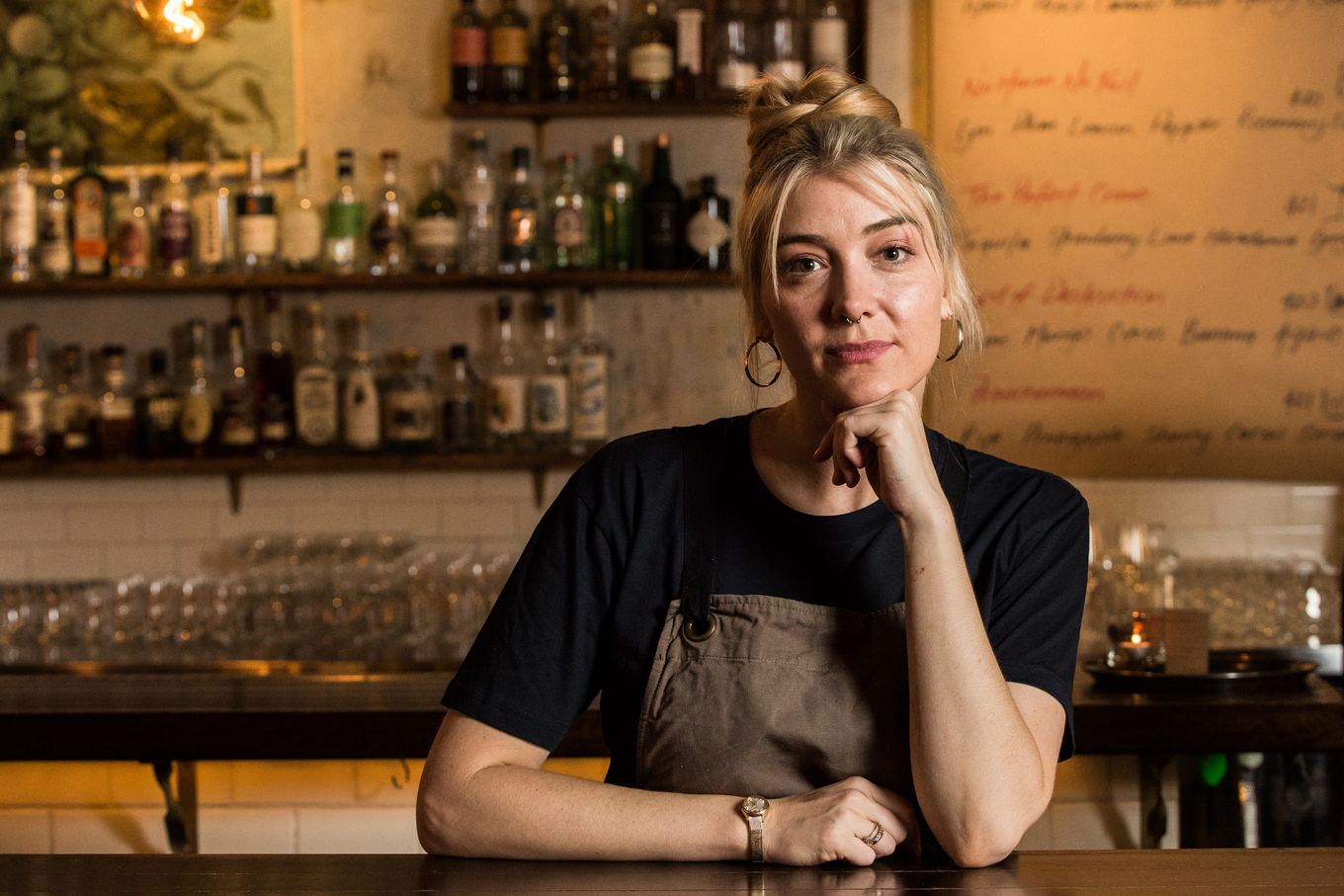 From pubs and clubs to the bars of Clarence Street

"I always knew I never wanted to go to uni," she says. Having been out of school a few years Paige went to uni, but she was right, it wasn't the where she wanted to be. Six months later and she started working in a bar with her sister as a waiter.

"I wanted to work behind the bar, but I had no experience or skills," she remembers. While the bar wasn't prepared to take on such a rookie, she was able to get a start in the nightclub next door, Kings Cross's now-closed Piano Room.

A stint in a fine dining restaurant taught Paige she never wanted to be a dispense bartender – "if it's through a docket it's my worst nightmare, I need that energy with people" – and catapulted her back into late night bars, this time however it was an industry hangout that closed at 8am. Here, in the back room of a pub, the name Paige Aubort started to mean something in Sydney's hospitality scene.

"All these bars were just starting to pop up, and I got to serve so many of the bartenders working in them, it felt like we all grew up together in that time," she says.

Her next move took Paige into management, but it was not where she felt ready to be. "I wanted to build my core foundation as a bartender so when I did move up, I'd know everything. I think a massively positive trait of mine is being willing and open to learning at any time and I definitely didn't feel like I had done enough of that yet."

Aged 24 Paige dropped her CV into Lobo Plantation on Clarence Street and says that's the spot her career truly started. It was just three months into the opening and the team assembled were an all-star, give-a-damn-all-the-time group of bartenders.

Once again Paige was offered the chance to move into management but was reluctant having felt totally unsupported the last time round. "I said no, I'm so burnt, but the manager said we've got you, and they did, and they supported me in that for a year which was an absolute game changer," says Paige.

From there she helped open Kittyhawk with Andres Walters, a man Paige described as 'my mentor and rock'. It was Dre, as Andres is known, that suggested Paige look outside of bars for something to do, driving her to start Coleman's Academy.

Coleman's couldn't take away the anxiety and other mental health challenges entirely however, and after three years Paige was feeling burnt out. She took a step back down to bartending and started at Mary's in New Town. Going back to basics wouldn't last long though, and soon Paige found herself in a fulltime role as Group Operations looking after both the Newtown and CBD Mary's as well as The Lansdowne Hotel and the Unicorn Hotel.

"I loved that company and working for them, they're so forward thinking and conscious of social issues and responsibility but ultimately I was a pub operator, which is just not me. I am highly relationship driven and very empathic, and in that role you have people quitting and it feels personal. You have people dealing with anxiety, depression and even alcoholism and I did not know how to compartmentalise it," she says.

Paige took a decisive step and left, to both focus on Coleman's and begin bartending at Bulletin Place in Sydney's CBD. The small bar on the first floor above a café, where the menu changes each day and staff do all jobs from hosting to shaking tins, has proved a refugee for this talented woman who has a habit of burning herself out. 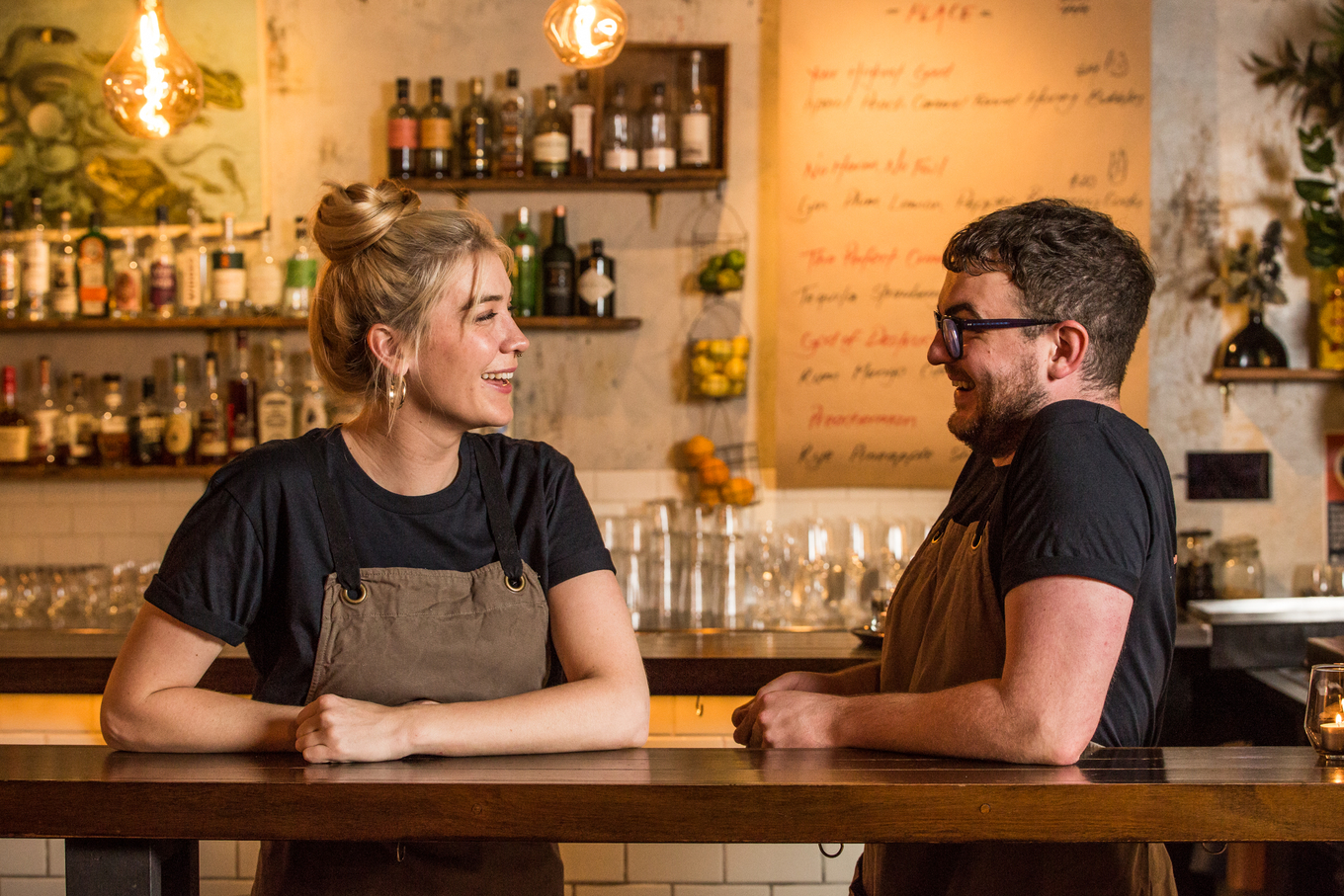 Tragically for Australia but lucky for the UK, Paige's next move will be larger than any she has made so far – at least in terms of distance – as she looks to decamp to London at some point this year (2020). She's convinced Coleman's can go with her, and I'd wager she's right. As for its time in Australia, Paige is starting to feel the generation under her might not need it as much.

"Women bartending across our city are badarses. I don't doubt they struggle with anxiety or issues – but it's engrained in their DNA to know about sexual harassment, wages, their worth, their sense of identity – and I think we'll see a golden age in five years' time as the next generation rise up. Colemans is sick because you walk into a room and everyone is fantastic, and that's where we're leading to now."

As for what she'd like to do next, it has less to do with flavour and more to do with helping that next generation of bartenders.

"We're all on a continuous arc of learning – with the advent of Instagram particular and following other bartenders – we're sharing and communicating more and wanting people to make our drinks and try others so it feels like a positive time in the industry. What I'd like to do next has to do with my love nurturing people, managing them, adjusting that to different people and seeing best brought out in them. It just isn't valued much in this industry which is all about gp, costs and finances. Not the human resources at the end of the shaker," she says. "Not many bar groups hire people to look after their staff, to make sure they feel heard or help them find their gateway to senior positions."

Here's to hoping someone in London hears this sentiment and makes a first move to correcting that gap in our industry.