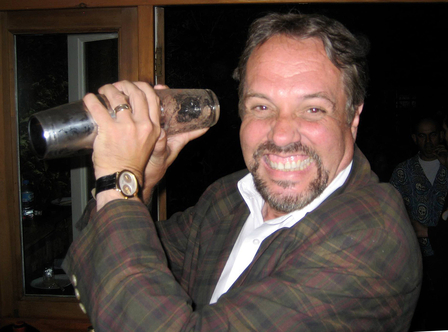 “The book that's closest to done is a book on Southern cocktails,” Ted “Dr. Cocktail” Haigh explains, from his rambling, ever-evolving house in Burbank, outside LA. “You've probably seen various books on Southern cocktails: they tend to be very, very thin... But by the time I even paused to count, mine was over 750 pages already.”

Mr. Haigh is blessed with a pair of careers that many would kill for. He's an award-winning Hollywood graphic designer with credits running from American Beauty through to Boardwalk Empire. He's also the cocktail nut who brought us the now-classic Vintage Spirits and Forgotten Cocktails, created probably the first authority drinks site on the internet, and is virtually part of the furniture at Tales of the Cocktail.

“Everything I've done has been calculated to make me happy and to integrate with each other,” he explains. “The basis for all of these, the apex of these things, were design and research. I was always good at research, always good at design: it was transferable. I loved it.”

And what he's done is remarkably broad-ranging. A man of dizzyingly varied interests, Doc collects not only vintage spirits and cocktail books, but vintage ties, records, sheet music and cars, all of them with the deep, internalised knowledge that's the mark of a true collector.

The vintage cars, for the record, run from classic Americana such as Packard and Pontiac to quirky breeds such as the Kaiser, not to mention a 50s Bentley. His day-to-day vehicle is a Jag, but he's likely not done collecting. “I've kept my eye on a 1964-5 Studebaker Gran Turismo Hawk,” he says. “But my wife would shoot me in the head.”

Tyrion Lannister's line from Game of Thrones - “That's what I do – I drink and I know things” - could have been crafted for Haigh. Even as his sixtieth birthday looms, he spills over with puppy-dog energy and bubbles with ideas. (Will he be celebrating the big 6-0? “Maybe with a hemlock cocktail.”)

Haigh started poking around in the world of drinks several decades ago. “The first cocktail book I saw was Patrick Gavin Duffy's Official Mixer's Manual,” he says. “I was fourteen years old, and I watched a lot of black-and-white movies, and I thought to myself: 'THIS is what all those people were drinking in those movies! The Bosom Caresser, the Corpse Reviver No. 2....'”

Yet, much as his twin passions of movies and cocktails interlinked, neither became part of his working life immediately. During his 20s, he washed around North America, doing jobs from DJ to construction worker to sign painter, while performing poetry: there's still a 'Jewish mother' inside his head who berates him for not making it as a poet.

Both Hollywood and cocktails began to coalesce in the 90s. He fell into cinema graphic design in Richmond, Virginia, when he was hired to paint fake signs for a movie that was shooting in town. Eventually, a work contact persuaded him to abandon his native South for LA, where he progressed from painting signs to designing all the graphic elements that make a cinematic world feel real.

“There'll be people hawking newspapers, I'll have created those; there'll be people running around with bags of money, I'll have counterfeited the money,” he explains. “Shops with signs, vehicles with signs, banners, electronic signs... Anything that a location would require to disguise the fact that it's modern-day versus the period we're attempting to say it is, I'll design.”

Around the same time, he began more serious research into cocktails. This was an era when finding ingredients meant ringing round liquor stores and poking about in dusty stockrooms, and establishing that Kina Lillet was also Lillet meant serious, serious book delving. “There was no learning about cocktails on the internet,” he says. “You had to go out and find a book, and most of the books were out of print.”

He gleefully recalls persuading a liquor store manager to let him out back, where he found not only Carlshamns Flaggpunch but an elderly four-pour bottle containing Forbidden Fruit liqueur. Yet more than a decade passed between his first attempt at making a classic cocktail, the Corpse Reviver No. 2, and finally making the drink properly.

“In the early 90s, I discovered everything that would, without my really knowing it, turn me into some sort of authority on this stuff,” he recalls. “I went back to Patrick Gavin Duffy... As though with lab equipment, I carefully measured every recipe. By the time I moved to LA, I'd found all but the missing ingredient that enabled me to make the thing.”

Long before Google, let alone Facebook, during the era when getting online meant dialing into a server from a telephone wire at home, he discovered AOL, a computer behemoth that was beginning to transition from bulletin board to internet provider. Their food and drink network included a drinks section, which proved transformative to someone in the grip of cocktail obsession.

“That's what led me to initially understand that it wasn't just me,” Haigh says. “I wasn't the only person interested in vintage cocktails... There were a lot of people asking some of the standard questions – 'Shaken versus stirred?' 'What does this mean?' - so I started answering questions until I became the mainstay answering there.”

He met Gary (now Gaz) Regan on AOL, not to mention William Grimes, the New York Times critic who produced the seminal Straight Up or On the Rocks: the Story of the American Cocktail, and Dale DeGroff. The day after he changed his screen name from AgingWino@aol.com to DrCocktail@aol.com, AOL hired him to become their drinks maven, a gig that would last until someone in a suit asked him to take a knowledge test.

It's hard to explain how hugely, hugely frustrating the internet was 20-odd years ago, but Haigh manages. “It was like a game where you're on a road after a major storm. There are tree limbs and electric lines everywhere and you have to get around them until you can't get any further,” he says. “Trying to use the internet as a way of gaining information was like taking your local telephone book to learn how to perform brain surgery. It just didn't compute.”

His first website was a cocktail museum, identified, in days when domain names were rare, just by a url and a number. After that, he created cocktailDB.com, almost certainly the first cocktail database on the internet. “It's kind of moribund now,” he says. “I need to get a good database programmer and explain what I want it to do in the future.”

But what informs Haigh's writing work today is not just the intersection of visuals and research, but an insanely wide-ranging autodidactic intellect. Besides the Southern cocktail book, his ever-fertile mind is spawning tomes on atomic energy, electricity, computers and communications, and how they've shaped human life. “I'm going to call the communications one Two Cans on a String,” he says.

Yet, still, those twin passions of movies and cocktails dominate. Asked what his favourite cocktail movie is, he doesn't even pause for breath. “Without question, it's The Thin Man. It has everything,” he says. “In comes Myrna Loy's girl and there's this woman in William Powell's arms having fainted. You're expecting her to be gobsmacked and say something scathing, but she pauses, stands there for a beat, goes and makes herself a martini. It's just perfect.” (Casablanca comes second.)

Haigh's Hollywood career means he's a little more liberated from the service of drinks brands than some, although, given classic cars don't come cheap, he's considerably more than an enthusiast. “Embury was truly, simply a devotee. He was making MASSIVE bucks as a lawyer,” he says. “I'm kind of in a purgatory in between. I like to consider myself more a devotee. But money does crawl into me from these sources.”

We talk about his library, already full from floor to ceiling with books and rare booze, and with a further 41 boxes of books awaiting placement. “My bar has served people well,” he says, reminiscing about a guest who died the week before. “I often think how many years have gone away, and how thoroughly I have abused the privilege of life.” 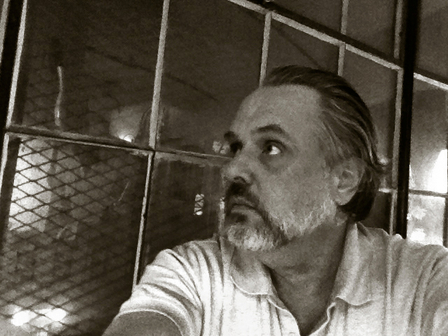 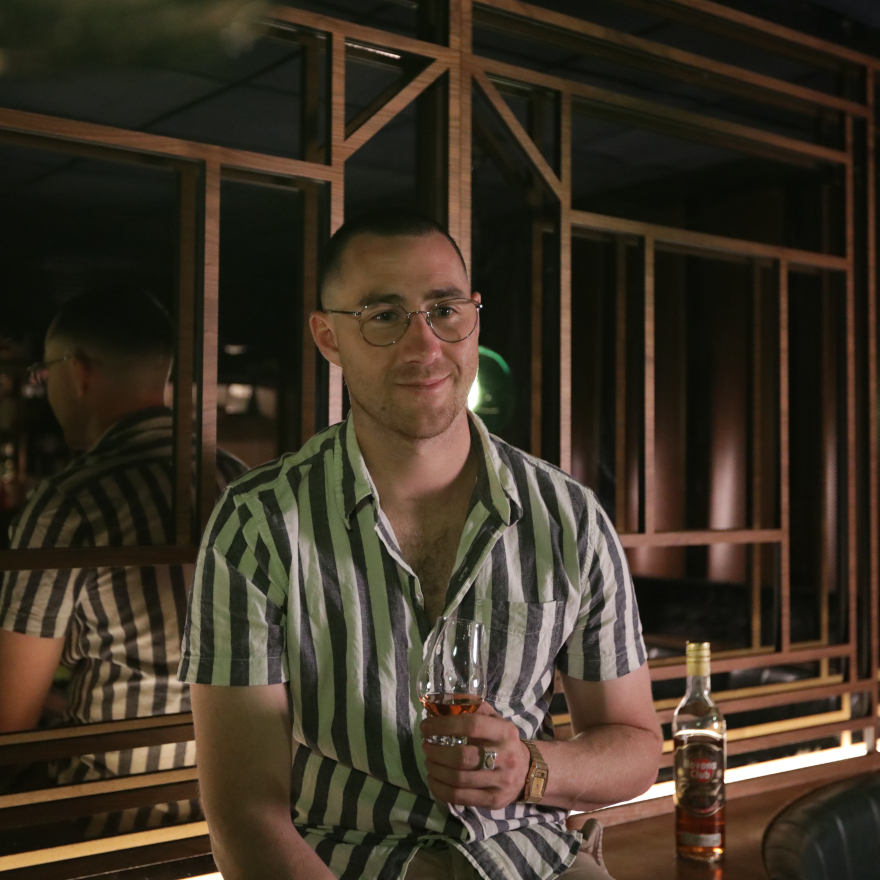