Trying to name five famous female bartenders is a bit like the old joke about naming five famous Belgians (answers for both gratefully received in our comments section). Boston bartender and former theologian Misty Kalkofen probably deserves her name on any such list - of famous female bartenders, not Belgians - such is her national profile in the US and the accolades she has won. On the eve of leaving Drink, her home of the last three years, we asked her how it felt to be one of 'the few'.

"I was in a cocktail bar in LA recently, and there was a girl wearing a revealing cocktail dress and high heels," says Misty Kalkofen. "I didn't realise she was actually working there at first - her 'uniform' barely covered her bum. I can't imagine that she ever went up that ladder to the back-bar."

Call it what you want - misogyny, sexism, voyeurism - it's clear that much of the bar industry still has a somewhat 'traditional' role reserved for women, and this example comes from an otherwise cosmopolitan city on the left coast. In her 16 years as a bartender, Misty is sadly used to coming across what you'd think would be outdated notions, including that it is somehow 'unsafe' to leave a woman in charge of a bar, where a glass ceiling patronisingly protects those below it from themselves.

Happily, the proudly tattooed and gloriously named bartender (naming her Misty was a last-minute decision by her parents - she was supposed to have emerged from the womb as a boy, to be called Michael) is part of a national movement that is seeking to educate women drinkers, to elevate women bartenders, and eradicate dinosaur views about women's capabilities along the way. Combined with her innate talents as a bartender - in 2011 she was one of five contenders for Tales of the Cocktail's American Bartender of the Year, and the bar she was working in at the time, Drink, won the Best American Cocktail Bar Crown - she is steering a path that few have trodden: that of the famous woman bartender.

As president of the Boston chapter of LUPEC (Ladies United for the Preservation of Endangered Cocktails), she is now a familiar face on the national cocktail circuit, giving talks to groups of bartenders, recently taking to the stage for the LA Bartender's Guild with William Grant brand ambassador Charlotte Voisey and Lani Kai and Clover Club owner Julie Reiner on the challenges of women in the industry.

"I had no idea it was going to turn into something as large as it is," says Misty. "Many years ago a good friend like me, a cocktail enthusiastic, stumbled upon the original LUPEC chapter, in Pittsburgh, which was founded in 2001. They were talking about some great drinks. The thought faded into the background for a while, then a few years later, I was talking to women around me - some in the industry but many not - and we all wanted to be philanthropic in some way. Lupec seemed fun - a good excuse to gather once a month if nothing else."

The basis for a Lupec meeting - they're monthly - is identifying a theme in female culture or broader topic such as the history of the cocktail, and linking it to a popular classic cocktail, category, or forgotten drink, and often linking it to a charitable cause, such as breast cancer or domestic violence. One of the first raised $15,000 for the latter. "We were shocked," says Misty. "After all, this was slightly shaky ground, using alcohol as a way to help combat domestic violence."

"Many attendees may not have not been to a cocktail bar before. We're definitely spreading cocktail culture around Boston, and an appreciation of what a good cocktail is. It's baby steps, but that's how you learn to walk: we served Southsides to a room full of women who thought they hated gin. At a tiki party we held we showed there could be complexity, not just a cloying mess. There's definitely a bit of education, but is it a lecture? Not so much, especially if you're tasting five tiki cocktails. If you make it fun, people will come."

From Harvard University to the Harvard Cocktail

Such valiant work doesn't pay the bills, however. But the day job that she is now famous for might never have been. Misty started bartending while still studying for her Masters in Theologian Studies at Harvard. 'Plan A' was to continue on to complete a doctorate and then go into academia. Lucky for the bar business, Misty was extremely poor and a little bit burnt out academically, so bartending provided some welcome respite.

"I had got a job at the Lizard Lounge in 1996, which started hosting cocktail nights - our cocktail of the week was always a classic and I would have the recipe memorised. The night went on for two and a half years, so I learned a lot.

"Then I realised that so many people spend their life searching for that one thing, and here I was motivated to learn more about cocktails - each time I thought it was time to start looking at theology programmes again, I would put it off. I hadn't been as happy studying theology - why would I leave bartending?"

That was basically it for her academic calling, and the Lizard lounge heralded the start of a 16-year bartending career (so far) which has seen her work at some of the best bars in Boston: the B-side Lounge, then Lilli's, the West Side Lounge and Tremont 647. Then it was back to the B-Side Lounge (again) and Green Street (concurrently), then to Drink until this month.

"It happened organically. It wasn't a plan, it just seemed like the right thing to do," she recalls. "When I first started you couldn't find a bar with fresh squeezed juices. I was about one of four people interested in cocktails back in 1996. It's amazing to see how the scene has expanded, with a critical focus on the bar programme and a lot of young talent coming through, and now so many people interested in it. The We even have the Boston Bar Collaborative now holds regular seminars on everything from taking a guest through a cocktail experience to how flavours complement each other."

Boston is about 220 miles from the mixological Mecca of New York. Does it feel like you're in the shadows? "With a city like Boston there's always the perception it would be in the shadows, and at first we did look for guidance there, and hospitality took a back seat to what was happening behind the bar. But now the focus is back on the guest and hospitality is absolutely amazing.

"I love it when I have a guest leave my bar and they tell me which bar they're going to next. I'll call up the next bar and tell them to expect them, to help maintain their amusement. I think that's the Boston standard."

Misty has just left Drink. She's currently on vacation and upon her return she will be working at a new bar opening in Central Square, Cambridge, called Brick & Mortar - one which promises to be a bartender's bar.

"It's owned by my good friend Patrick Sullivan who previously owned the B-Side Lounge. The B-Side was instrumental in the foundation of the cocktail community that currently exists in Boston, and upon its closing three years ago Patrick went to work for Legal Seafood running their beverage program. Now he is ready to be back in the bar business. It will be a spirit-forward cocktail programme (ie strong and stirred) with the laid-back vibe that made the B-Side the favoured hangout for industry professionals throughout Boston."

Misty resists the idea of being a poster girl for women bartenders - she's just a good bartender who happens to be a woman: "Women are working hard to be as recognised as the men around us," she says. "I want to be recognised for what I do, not because I am a woman." And she's academic about how to succeed as a woman. "Put your head down and try harder. I think there's already an appreciation of working hard - I look around and see fast, accurate women with beautiful personalities.

"But we are not as vocal about what we're doing as we might be."

What about women's palates? Aren't they more sensitive than men's? "I don't necessarily think that's true, though I know I spent a lot of time in the kitchen with my mother together making bread, rolls, sauces. I think that gave me an appreciation of different flavours, a sensory memory, and I think of that when I'm building cocktails."

Between jobs, Misty's gone to Mexico on what is undoubtedly a busman's holiday. In fact, the love she has developed for agave spirits is something that's brought out the spiritual side of her for the first time since leaving her studies. "I am a bit agave head, and I love mezcal," she says. "Having spent some time in Oaxaca it's the first spirit that brings me back to theology. Maybe it's the ritualistic roots that mezcal plays in Oaxacan society, but I've finally found a way to bridge the gap between religion and bartending. Agave distillates in the last three to five years has been an amazing ride."

Her appreciation of raw spirit betrays an appreciation of more simple, short, stirred drinks. And her opinion of the more modish forms of bartending? Not so much - though it's no surprise that this founder member of Boston Lupec is something of a traditionalist. "We're seeing so many cocktails with seven, eight or nine ingredients. I think what I would really like to see is a simpler style of cocktail. There's beauty and complexity in just a few ingredients. You really have to ask whether you are adding something to the drink or masking the flavour - someone spent a lot of time and care developing it so why would you want to detract from that rather than celebrate it? You don't have to have a crazy foam."

Protest it she might, but in her repute Misty's definitely part of a small, exclusive club whose members are known largely by their first names - Audrey (Saunders), Julie (Reiner), Helen (David) and Ada (Coleman). Is Misty that fabled fifth member?

"I'm honoured to be included in that category but famous is not something I'm concerned about. It's more important to me to be doing whatever I'm doing well, whether it's serving my guests, creating cocktails or teaching about spirits while at the same time recognizing that there is always more to learn." 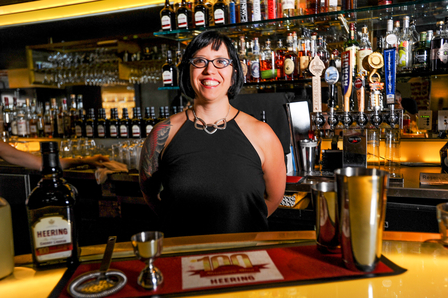 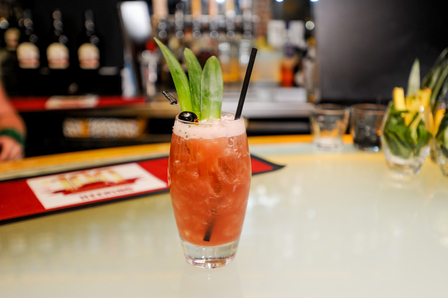 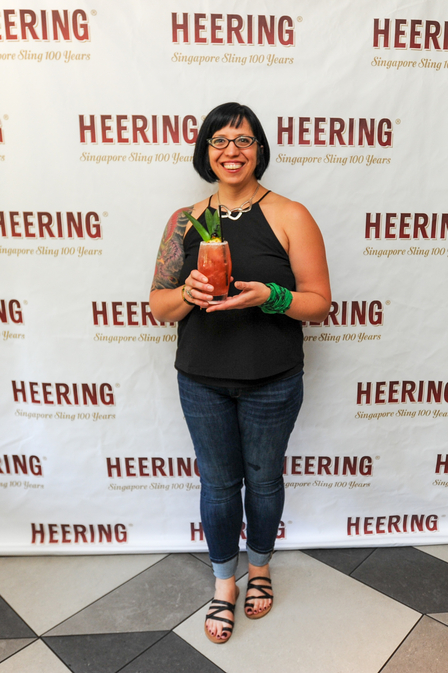