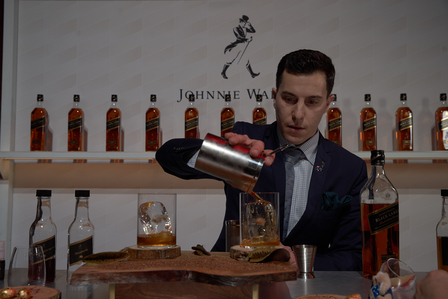 The last time I met Orlando was when he was bartending in the dimly lit den of iniquity that is Red Room at London’s Milk & Honey. Years later, I found myself one of a number of writers awaiting our interview slot with the just crowned World Class Global Champion – AKA “the world’s best bartender”.

Orlando was celebrating with his girlfriend Hannah and it was immediately clear that her support had played a major role in his success. Tellingly, when asked if they were married Hannah replied, “It’s on the trajectory.” Orlando certainly appreciates what a lucky man he is, “Hannah spent a lot of time helping me… talking through different ideas. She’s a midwife, and for me, the greatest gift, because if you can explain something to someone that doesn’t have industry knowledge, then that’s very helpful. One night she drove an hour-and-a-half north from Melbourne just to pick up an ingredient. She really, really believed in me.”

Orlando was born in a very small town called Castiglione d’Otranto in southeast Italy and apart from a brief period in Milan, grew up there. “I’m from a really, really little town. They love me. I’m on the news there already. They really, really support me a lot. It’s incredible – I never feel that I’m outside of them because I’m always connected to my family. My family is always close to me.” Indeed, it transpired that his mum had travelled from Italy to support him in Berlin during the competition.

“I was lucky to have the chance to represent a big country, a country I now call home – Australia is really, really incredible. It is driven by young people, fresh minds, talented people in the industry. I was in London before for four years, I had the pleasure to work at The Player and at Milk & Honey.” Orlando, who’s lived in Australia for the past five years now works in Melbourne’s Lûmé, a highly regarded fine dining restaurant.

Now what do you want to do?

“I really want to deliver what I know, what I learnt. I’ve had the opportunity to meet great people in the industry. I’ve worked with top bartenders and people who inspire me every day. Giving that to somebody else, that would be my dream. If money wasn’t an object, I'd set up a club where I can help people on a bigger scale. We eat, we drink, and we dress every day, no matter what. No matter how much money, no matter the style, no matter what the taste. But we can really, really choose. Right now, there are people drinking bad drinks around the world, so, if I can maximise and help and support the young generations, that would be my goal.”

Do you see yourself opening your own bar?

“Yes, 100%, yes. In Melbourne next year… I have people really waiting for me to get back…”

Tell us about the competition…

“World Class was very challenging and inspiring. I always look at things that you can learn from anywhere really. So, I always look around, how did these people come up with this idea, what did they do, how did they even think of that? I’m hard on myself, sometimes too much though, because I’m a Virgo, I try to reach perfection… But the competition was hard, in Australia World Class it is massive, it is massive worldwide. But in Australia we had 507 entrants this year, I got through to the top 100 and then won. I wanted to be a part of this, beyond the selfish achievement, I really wanted to be inspired by these people.”

And the cocktails you made, what was your killer drink?

“I was incredibly happy with the Tanqueray challenge. I was really, really happy to see their reaction, not their technical spreadsheet, but the judges’ eyes. I’ve learnt that if you really want to know if you made a good drink, just watch the reaction in their eyes from the first sip. So, if you can capture that… Alex Kratena, Elliot and Jeffrey Morgenthaler… I had decades of experience in front of me, I cannot be prouder – no matter the result of tonight.”

Tell us about your Tanqueray TEN serve…

“I looked for the core of the gin to highlight the best expression. I distil all the colours in the canvas and come up with one colour that really describes the power of the canvas.

“My drink really meant a lot to me because to a certain extent the formula was based on a Negroni, but I wanted to make my bitter components without heaviness. So, I distilled Belsazar vermouth with grapefruit peel. I wanted to impart sustainability, a smart approach to fruit in general, as a bartender and as a person in life. So, I used the fruit’s skin distilled with the vermouth to give a brighter, hidden botanical aroma and to highlight the zesty component of the gin. Then I used sherry and infused with plum, not so much for the plum’s flavour but to contribute tannins and add structure.

“I like to highlight the essence, rather than the substance. I like to have powerful aromas, really incredible structure, without having all the heaviness. And techniques should be only driving you to the perfect flavours. I never start by technique, I always start with flavour. Then work to develop structure.”

“This was not just driven by me, just 1% me. I get to have the credit because I was the one presenting, but its 99% due to others. Hannah, my colleagues at work, everybody who really, really helped me – even just by saying, “you’ll do well”, “I think you should change this”. Such reactions are great because if you listen that’s how you develop detail, become fussy, and shape the perfect sphere.”