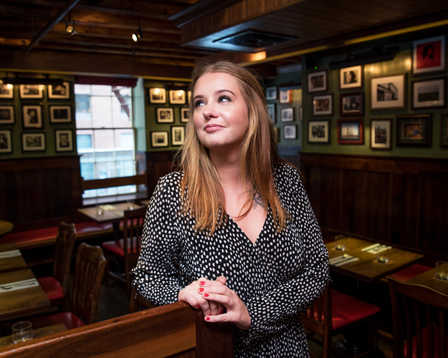 “I didn’t enjoy bartending,” recalls Rebekkah Dooley, events, marketing and PR director for New York’s much-awarded Dead Rabbit and BlackTail. “I’m not someone who enjoys being on stage: I prefer to be behind the scenes.”

And behind the scenes, the marketing and communications specialist from London is a force to be reckoned with. A brand as much as it is a bar, Dead Rabbit boasts a press presence up there with the biggest hotel bars, over 100,000 followers on Instagram and more than 50,000 on Facebook. Dooley has come a long way since her childhood.

After her father, an alcoholic, died, Dooley lost her way for a time, clubbing, partying and drinking in Amy Winehouse-era Camden. “I think I definitely tested the limits. I was told – and I don’t even know if it’s true – that if you have alcoholism in your family then you’re more susceptible to being an alcoholic yourself,” she recalls. “I think I was probably trying to test that. When you’re young, that’s what you think: ‘That’s my destiny, that’s going to happen to me too...’”

But it didn’t. And today, while aware of the irony of working in the alcohol industry – her teetotal mother has not visited any of the bars Dooley has worked in – she drinks just once or twice a week, a transformation she accredits to being happy with her life. (It may also help that Dead Rabbit co-founder Jack McGarry has been open about his struggles with alcoholism.)

“A year ago I became vegetarian, quit smoking and I started working out five times a week. I care more now about looking after myself and my health, because I have a life that I enjoy and want to prolong,” Dooley explains. “Up until the age of around 29, I didn’t care about that at all - I’d never been to a gym, I ate pizza most of the time and drank probably five times a week. Now when I do drink it’s about having fun and letting loose - not about drinking to forget.”

It was Milk & Honey (the London version) that set Dooley on the path to the life she loved, after she saw an ad for a job on the door online. “I’d never experienced that kind of bartending culture,” she recalls. “They took exams, the bartenders: I thought that was crazy. I didn’t understand why they all hung out together and did competitions, and it all went over my head until I left Milk & Honey and went to another bar that wasn’t nearly as good.”

Beginning to take her career seriously, Dooley started work at Shoreditch’s Callooh Callay as a reservationist then spotted an opportunity to develop their social media. “The tipping point was when I was getting more press than the PR company, so they got rid of the PR company and then I took over the PR,” she recalls. She asked her bosses if she could try designing a cocktail menu: in 2012, her second version won world’s best cocktail menu at Tales of the Cocktail.

Consultancy and brand work followed, plus a short stint at Leeds-to-London operator Leelex, before she scored the role of head of communications at the London EDITION hotel, proving Dooley's skills despite never having finished school. “If I were like I was at 21 now in 2018, I think it would be a lot harder for me to do what I’ve done,” Dooley says. “I think bars are probably looking for people who have professional experience or some kind of academic qualifications.”

A gig at a five-star operated by one of the world’s largest hotel groups would be a winner for many, but Dooley wanted more. “I’d always hoped to get a job at Dead Rabbit, and I’d done events with Sean Muldoon and Jack before,” she says. “Then I did an event in New York and it was on that trip that Sean said, ‘We have a vacancy for you.’”

Today, Dooley divides her time between Dead Rabbit and BlackTail, managing the marketing, social media, the websites, special events, and PR: they have a PR agency for the US, but she looks after the UK and European media herself. “Sean is really more of the creative director so he deals with anything visual. The menus, branding, all of the artwork comes from his mind, right down to the coasters, postcards and the posters we have on the walls,” Dooley says. Muldoon also has a camera to document everything from drinks creation to new staff arrivals for Dead Rabbit’s curated social media feeds, an activity which takes up a surprising chunk of Dooley’s day.

Social media is no longer an optional activity for any bar, but it’s particularly important for one that relies on foreign footfall, such as Dead Rabbit. “We use social media to help build our brand personality: it’s a huge part of the identity for Dead Rabbit,” Dooley says. “A lot of guests are tourists from Ireland, so they will look us up beforehand.”

Apparently artless cocktail and other shots – it wouldn’t work for the brand for staff to be photographed in full makeup, Dooley remarks - are accompanied by slick text from a Belfast-based copywriter. “Conor writes it as though he was here, as though he is the Dead Rabbit,” she says. “We definitely try and keep it conversational and relatable: we’re not really an aspirational brand. We try to be the embodiment of Irish hospitality, so it is all about being approachable, being easy to understand, being friendly.”

Currently, Dooley has more on her plate than creating concepts for Instagram. Dead Rabbit is expanding into the space next door; the bar’s second book, Mixology and Mayhem, is released on Halloween; and the Whiskey Lover’s Guide to Ireland, an accompaniment to the Dead Rabbit’s branded Irish whiskey and a tribute to the vanishing world of the authentic Irish pub, comes out in March.

“That’s the one where me, Sean, Jack, Jack’s dad, Tim who works for Tullamore DEW and a photographer called Elaine took a 1976 Volkswagen van to Ireland twice,” Dooley says. “We went to over 111 pubs and every whiskey distillery in Ireland.” (The Dead Rabbit’s whiskey is doing well in the US, Dooley reports, but as it’s illegal in New York to own a bar and a brand, Sean and Jack donate their share of the profits to charity.)

And that’s not the only opportunity Dooley gets to travel. Events have taken her all over the world, including to London’s Claridges hotel, where she spent a fortnight helping oversee a Dead Rabbit pop-up.

Not only did her mum get to visit, but Dooley spent her birthday there: just minutes from King’s Cross, where she was born, but a whole, vast world away. “If you’d have told me when I was 14 that I’d be staying at Claridges for two weeks eating crumpets from room service every morning, I wouldn’t have believed it,” she says. To a degree, it sounds as though she still can’t...hats off to her.

Rebekkah will be speaking during London Cocktail Week at a special Tennessee Calling event, as part of all star line-up of guests. Find out more and sign up here.

Also at London Cocktail Week, don't miss out on the following featuring The Dead Rabbit and BlackTail:

October 1st: BlackTail bartender William Pasternak is at Super Lyan from 8pm - 12am with a menu of 5 BlackTail cocktails, starting at $5, created with the Havana Club portfolio.
The Dead Rabbit Beverage Director Jillian Vose is bartending with Best American Bartender Spirited Award winner Yael Vengroff at Coupette for East vs West with Slane Irish Whiskey and Woodford Reserve from 8pm - 11pm.
October 2nd: The Dead Rabbit Taproom is taking over The Sun Tavern with The Dead Rabbit Irish Whiskey. Expect sawdust, Irish Coffees, cocktails and Guinness all night long for an evening you won’t remember, from 6pm - 1am.
October 3rd: The Dead Rabbit and BlackTail are competing in the Aviation Gin cocktail Competition at The Old Truman Brewery from 12pm - 4pm. The prize is pretty great and we hear the Dead Rabbit is 100% in it to win it.
October 5th: BlackTail is taking over The Bloomsbury Club Bar with Thomas Henry from 6pm - 12am with a selection of BlackTail cocktails, BlackTail music and Cuban Food. Book via blacktail@thebloomsburyclub.com