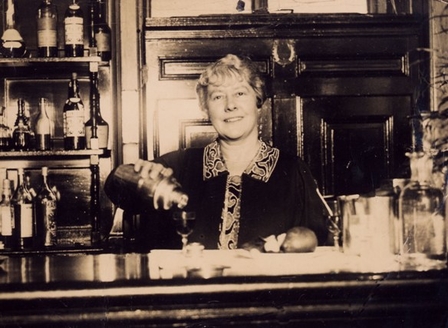 Ada "Coley" Coleman, described by the Daily Express as the "most famous barmaid", was, in all probably, the best-known female bartender of all time.

At least five newspapers covered her retirement from her role as head bartender at The Savoy's American Bar, a position in which she seems to have, briefly, overlapped with Harry Craddock.

"Coley" took up bartending after her father died. He had been a steward at Rupert D'Oyly Carte's golf club, and D'Oyly Carte duly offered her a job at one of his hotels - in the bar at Claridge's, where she started work in 1899, aged around 24.

She made her first ever cocktail there, a Manhattan, under the tuition of a man named Fisher, who was the wine butler. Her talent and presence led her to move to The Savoy's American Bar as Head Bartender, after Frank Wells retired, in 1903. She would remain there until early 1926.

Ada, a fan of celebrities and theatre in general, made cocktails for some of the world's most famous people: Mark Twain, the Prince of Wales, Prince Wilhelm of Sweden and the American millionaire "Diamond" Jim Brady.

At home, she regularly hosted parties for theatre people, full of singing, dancing, music and laughter. (The D'Oyly Carte family, to whom she remained close until her death, ran not only hotels but a musical theatre company.)

But Ada's personality made her popular with all her guests. She received presents from all around the world; Lucas D'Oyly Carte left her the then-substantial sum of £100 in his will; and the Earl of Lonsdale, impressed by her performance at a charity fete in June 1913, introduced her to Princess Alexandra.

Her most famous cocktail, and the only drink which Craddock attributed to her in his Savoy Cocktail Book, was undoubtedly the Hanky Panky. She created it for a comic actor named Charles Hawtrey, when he requested something "with a bit of punch in it", because he was overworked.

While still at The American Bar, Lorincz said, "We are still serving that drink, in two versions. One of them is Coley's way, with gin, sweet vermouth and a few dashes of Fernet Branca, although we prefer it stirred to Ada's shaken version. The second is a blend of four different gins, four sweet vermouths and two bitters, blended together and then aged in American new oak barrels."

Ada was a genuinely jolly, sunny, kind-hearted soul. Rupert D'Oyly Carte wrote to her that "my brother always was very pleased and grateful for your sympathy and interest". The Earl of Lonsdale, similarly, wrote that "the kindness and energy displayed by Miss Coleman was marvelous and she was so nice, and so kind and so full of life and energy".