Never short on ego, Boothby described himself as “Presiding Deity” of the club house at San Rafael's swanky Hotel Rafael when he introduced the first edition of his cocktail book in 1891. He would advertise it assertively with the line: “Bar-Keepers – You're Not In It If You Don't Read Cocktail Boothby's 'American Bartender'”.

Yet not long after the book came out, he had moved his godhead to the role of “Professor” at the Piedmont Springs Hotel, then owned by the controversial and hard-partying Baron von Schroeder. (He also worked at a third out-of-town hotel, the prestigious Byron Hot Springs Hotel, early in his career.)

During his twenties, Boothby had honed his theatrical skills on tour with one of the West's “medicine shows”: travelling song and dance troupes whose repertoire hymned the virtues of patent medicine. (In this case, the magical remedy was Dr. McConkey's Vigor of Life liver pills.) The gossip columns of the local press provide ample evidence of his way with a story.

But Boothby did not have a huge amount of bartending experience. That first edition includes tips on how to rescue dodgy beer, not to mention how to artificially age beer – pickled cucumbers and Seville oranges, y'all! – alongside practical advice to the bartender, such as keeping the bar dry, your nails clean and yourself away from the product, which has aged rather better than the rest of the content.

Nothing if not entrepreneurial, Boothby parlayed his position into a role in California's state legislature. In 1894, by now the owner of a restaurant at 112 Powell Street and a member of San Francisco's prestigious Olympic Club, he stood unopposed as the Republican candidate for the Tenderloin, or 43rd Assembly District. His position in the Assembly would forever after enable him to describe himself as the Hon. William T. Boothby.

So boozy was late nineteenth-century San Francisco that the “saloon men” organised by J. C. “Fat Jack” O'Connor, who ran a saloon on Stockton and Geary, were recognised as a distinct political block. Boothby entertainingly dedicated his 1908 version of his book "To the liquor dealers of San Francisco who unanimously assisted in my election to the Legislature by an unprecedented majority," and appears to have systematically supported all measures, from hosting political conventions onwards, that might increase the drinking public of San Francisco.

By 1900, when the second edition of his book came out, the Honorable Bill was working at the iconic Parker House which, despite its inconvenient habit of burning down, was one of the city's oldest bars. He was already enough of a local celebrity for his portrait (dressed up as part-rooster) to be displayed on its outside wall. And, although the devastating earthquake and subsequent fire in 1906 destroyed almost all copies of his book – and even the plates from which it was printed – he had printed a whopping 50,000 copies.

Boothby ran his 1908 edition past a galaxy of successful bartenders, saloon-keepers and cocktail connoisseurs, all of whom, Boothby pronounced, found it “The Dope”. It includes a large number of “new” drinks, among them cocktails from as far afield as Paris and Havana, and makes a fascinating record of the changing cocktail climate in the run-up to Prohibition. 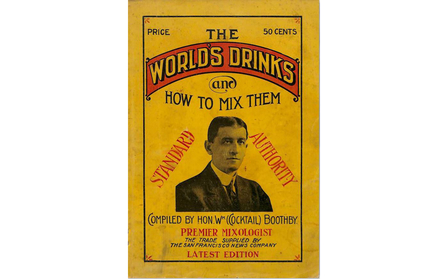 In 1914, by now presiding over the Pied Piper bar at the city's number one hotel, The Palace, underneath a Maxfield Parrish mural, Boothby added another list of new drinks to the new edition of his book. (Intriguingly, he already had vodka behind his bar: ever the diplomat, he put his people skills to work, resolving an argument between French and German customers with a Peace Cocktail including ingredients from all over the Europe that would soon be at war.)

Over his extensive career, Boothby would also work at the Fairmont Hotel and at the Pacific Buffet – sometimes, it seems, simultaneously with his gig at the Palace. Yet, unlike many other pre-Prohibition bartenders, he neither took ship for elsewhere nor changed career when the Volstead Act hit in 1919. In fact, Boothby was arrested for breaking the Volstead Act while tending bar at the Orpheum Annex “buffet” on O'Farrell Street in 1922.

Loyal friends seem to have stepped in, finding him a gig mixing soft drinks at the Olympic Club, then as a steward at the St. Francis Hotel. When he died of cancer on 4 August, 1930, almost 100 bartenders from across America attended his funeral. One of those present recalled Boothby's eponymous Boothby cocktail, a Manhattan with a hit of champagne. It was, he said, “a drink that never gods on high Olympus quaffed”.