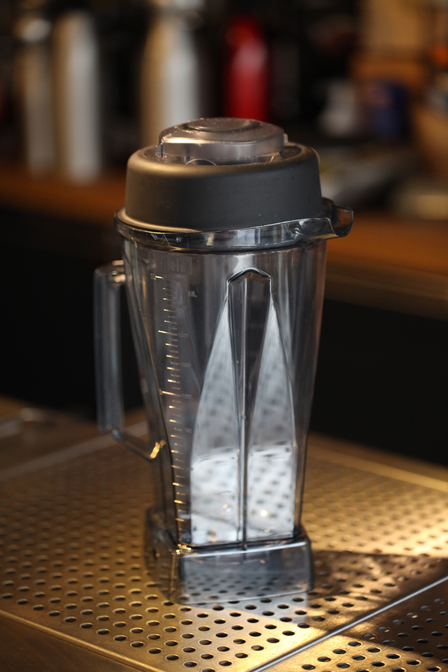 When a cocktail recipe calls for you to ‘blend with ice’, place all ingredients and ice into a blender and blend until a smooth, even consistency is achieved. Ideally, you should use crushed ice, as this lessens wear on the blender. Place liquid ingredients in the blender first, adding the ice last. If you have a variable speed blender, always start slowly and build up speed.

The scream of whirling blenders may not suit prohibition style lounges but tiki is back with a vengeance so it's time to clear your blender stations and install something serious.

Put a Vita-Mix next to the slick designer lines of a Kitchen-Aid blender and the Vita-Mix looks like an ugly lump of soviet-era industrial machinery. It's like comparing a Ferrari to a Chieftain Tank. However, turning the variable speed dial and lifting the Vita-Mix's blades from a slow, incessant churn through to a roaring whirling dervish is not dissimilar to revving the throttle of an idling Ferrari.

Truth is, Vita-Mix is a brute of a blender and hardly the piece of apparatus you would expect to see gracing a granite worktop in a high-end kitchen showroom. It's so tall that it would not fit in the space between the worktop and cupboards anyway. However, what Vita-Mix may lack in looks it more than makes up for with sheer strength. And how many bar blender stations have kitchen cupboards hanging over them anyway? The information plate on the back of the Vita-Max says, "Light industrial food preparing machine". This is no 'domestic appliance'.

The Vita-Mix is controlled by an on-off flip switch, a variable speed dial and a second switch, which when flipped, changes the machine from variable to high-speed blending. You quickly realise the benefit of the variable-speed dial plus the need to always start the Vita-Mix on slow as the blades can spin so quickly that it is possible to create a vortex of air around the blades so preventing them from actually blending at all.

The machine comes with a two litre polycarbonate container with a rubber lid with a central hole, through which you can insert the supplied tamper tool for pushing thick or frozen ingredients onto the spinning blades. It is designed so it is impossible to push the tamper itself into the path of the blades and incredibly even when ramming fresh ice down onto the blades the powerful motor keeps them turning, even at low speeds, so making the Vita-Mix an effective ice crusher. By the way, the low-friction ball-bearing 750-850watts, 50hz motor packs approximately a 2 peak horsepower punch. (My Hamilton Beach is a mere 320watts.)

Unlike other blenders the blades on the Vita-Mix are blunt, relying on the power of the motor to pulverise rather than cut. Anyone who has been to events such as the BBC Good Food Show will have seen the infomercial-style presentations where a spokesman demonstrates how the friction created by the power of these blades will, if left running for a few minutes, literally cook the contents. Sensibly, the blades are attached to the polycarbonate container and there are no pieces to take apart for cleaning.

This Rambo of blenders will set you back around £400 and a separate head with blades designed for grinding nuts, grains and sugar into a fine powder a further £100.