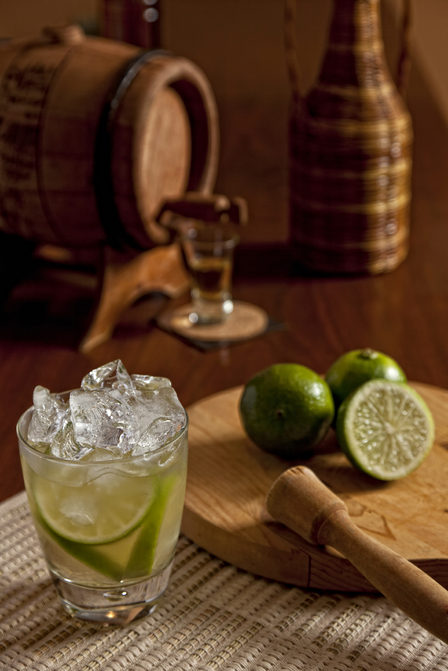 2014 was always going to be Brazil's big year thanks to the football world cup. And let's not be so naive as to think that Brazilian-themed restaurants and food will quietly fade to the background post-world cup. Because the led up the Rio Olympics in 2016 is going to cause even more hype.

To stay ahead of the game we've compiled our top ten cachaças, to try on their own, in a Caipirinha, or served long with soda and a dash of fresh lime. Made from sugar cane, the Brazilian spirit is not so far off a rum, although as traditionally maze meal is used to start the fermentation, many brands of cachaça are not strictly rums according to EU regulations.

Capucana Cachaça is distilled in Piracicaba, near Sao Paulo, using the fermented juice of three different varieties of sugar cane and is aged for three years prior to bottling. The name borrows from the old Brazilian Capu Cana meaning 'sugar cane house' (capu = house and cana = sugarcane).

Avuá Amburana Cachaça is made at a family owned distillery established in 1923 in a small town in a valley four hours north of Rio de Janeiro. It is distilled from first pressed fermented sugar cane juice and then aged for up to 2 years in vats made from a rare Brazilian hardwood known as Amburana.

From the makers of the familiar leaf-covered Germana brand of cachaça comes this Characterised by its crown cap and brown glass bottle, this cachaça is matured in Umburana cherry wood barrels for two years and is made north of Minas Gerais in the south east of the country.

Beija-Flor Cachaça is made using sugar cane grown in on the distillery's own estate and this 'Pura' is aged for one year.

In 2009, two New York entrepreneurs, Nate Whitehouse and Pete Nevenglosky, discovered just how good Brazil's native spirit could be and set about finding a distiller to supply them high quality cachaça and creating a brand name and packaging to convey that quality, the result being Avuá Cachaça.

Leblon is made from fresh cane juice obtained within three hours of harvesting by pressing only the middle and best part of the sugar cane. This fresh sweet juice is fermented and then distilled using an alembic copper still. The cachaça is then aged in ex-cognac casks for one month.

Leblon was launched in September 2005 by a former executive at LVMH, Steve Luttman, and ten partners. They raised $2 million to launch their spirit which takes its name from Leblon Beach in Rio de Janeiro.

Cabana is fermented from the first pressing of purpose grown, hand cut sugar cane from the Sao Paolo area. It is double distilled in copper pot stills before being aged for nine months in large vats made from Brazilian Jequitibá wood.

Like many spirits brands, Cabana Cachaça is the result of one man's entrepreneurial ambitions. Matti C. Anttila was an investment banker for JP Morgan in New York whose frequent business travels to Brazil led him to realise that although cachaça was the third largest spirit in the world, little was consumed outside of its native country. Matti convinced his friends Nick Barquin and Priscilla Bittencourt that he was onto something and in June 2006 the three business partners launched Cabana, their own brand of high-end cachaça in the U.S. market.

Aroma: A sweet nose with icing sugar and hints of the yeasty Christmas cake beneath.
Taste: The slightly sweet palate has an oily mouth feel with faint oak, hints of celery/lemon grass with herbal overtones.

Launched in the UK in 2007, Brasilla is a new brand with an established spirit inside the bottle. In its native Brazil the same product is known as "Jamel." It was established in 1958 and sells some 35 million litres annually, making it the country's third biggest cachaça.

Aroma: A hint of linseed oil emerges from a subdued nose with just a hint of dark sugar.
Taste: Rich, characterful and smoothed by an oily roundness and subtle sweetness. It opens to reveal complexity with subtle fruity hints of pear drops and dry, bready, nutty notes.

Launched in 2011, Leblon-Reserva is distilled in copper pot stills and then aged up to two years in new Limousin French oak casks.