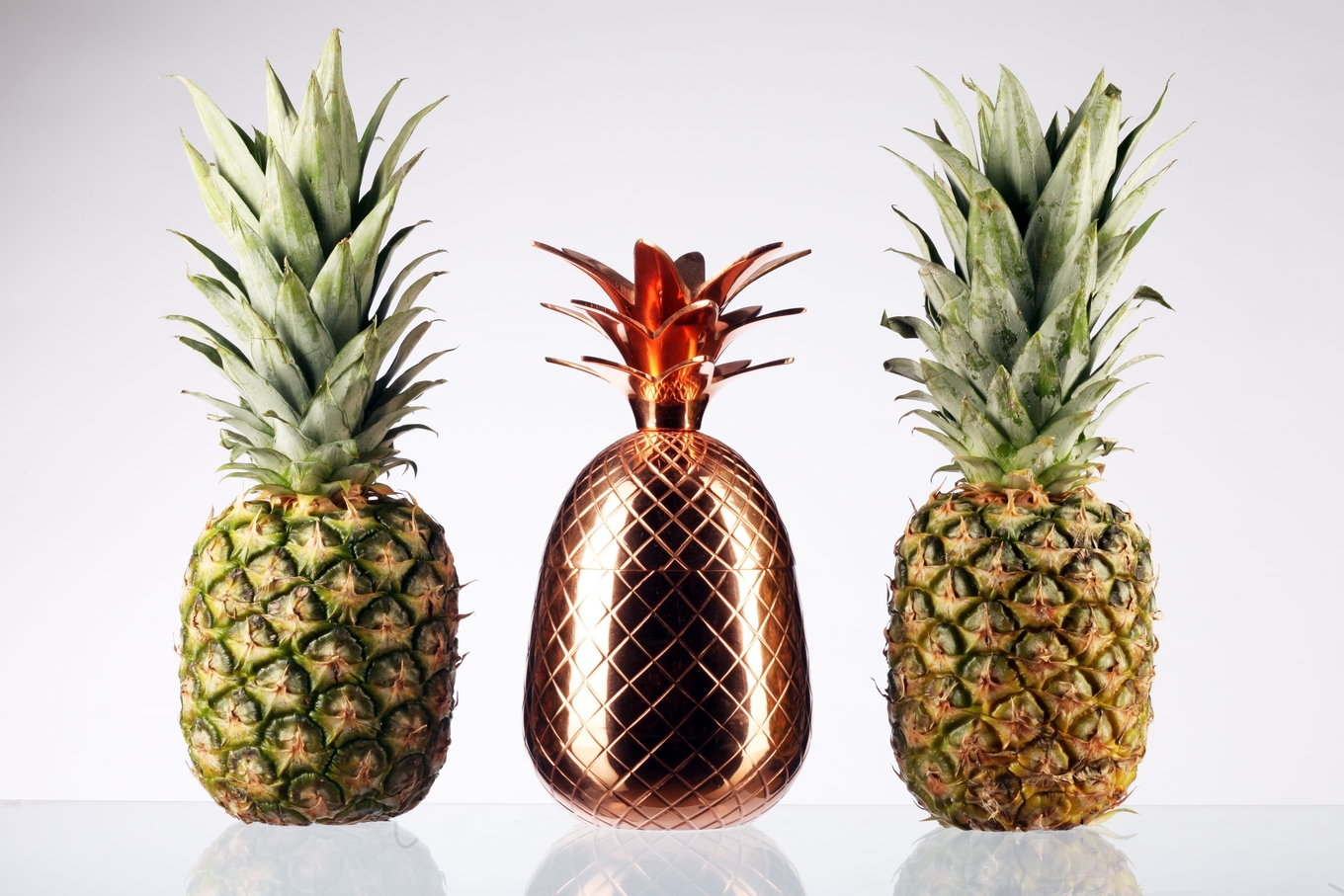 Pineapples are luxuriant and tropical, their rich fruitiness balanced by an enlivening cutting acidity. Pineapple blends harmoniously with all spirits but are most notably paired with rum in Tiki drinks. With or without a parasol, a simple wedge of pineapple is one of the best-looking garnishes and dried rings are a treat. We're celebrating this fabulous fruit with our 20 best pineapple cocktails.

Batida Rosa
With: Soda water, pineapple juice, cachaça, lemon juice and grenadine syrup
We say: Fruity and tropical. A tall refreshing drink for a hot evening or an afternoon beside the pool.

Chartreuse Swizzle
With: Green Chartreuse, falernum liqueur, pineapple juice and lime juice
We say: A swizzle for people like me - Chartreuse lovers. Best enjoyed on a hot summer's evening.

Downhill Racer
With: Aged rum, amaretto and pineapple juice
We say: Rum is sweetened, softened and flavoured with pineapple and amaretto. A crowd pleaser.

East India No.2
With: Cognac, orange curaçao, pineapple juice, pineapple sugar syrup and aromatic bitters
We say: The bitters play a crucial role in the balance of this after-dinner brandy and pineapple cocktail.

Pisco Punch
With: Clove, pisco, pineapple juice, orange juice, lemon juice, sugar syrup and champagne
We say: A tangy, balanced combination of rich flavours. The quality of pisco used is crucial to the success of a Pisco Punch.

Ultima Palabra
With: Mezcal, Green Chartreuse, maraschino liqueur, pineapple juice, lime juice and chilled water
We say: This riff on the Last Word is named after the direct Spanish translation of Last Word, hence the use of mezcal in place of gin. Pineapple juice, another distinguishing feature of this riff on the classic, works brilliantly - adding a fruity sweetness and complexity.

When The Smoke Cleared
With: Mezcal, Aperol, ginger syrup, lime juice and pineapple juice
We say: Smoky, tangy and complex with layers of flavour, although happily mezcal dominates.

The following was written by Dean Callan and first published on this site back in July 2013 when he was Monkey Shoulder Global Brand Ambassador. However, it remains both interesting and relevant.

I have set myself a mission: to re-instate the pineapple in bars across the world. Following on from 'The Pineapple, a Symbol of Hospitality' presentation that I gave at Tales of the Cocktail with my good friend Jake Burger, I'm feeling even more enthused. It seems Jake and I are not alone in our love of the king of fruits.

It all started on a visit to Cienfuegos, a brilliantly garish Cuban-inspired speakeasy hidden away above a sandwich shop in New York's East Village. The excitement started when I read the description of the Isle of Manhattan Fizz: "The bastard son of the Piña Colada and the Ramos Gin Fizz".

It was amazing, in case you are interested. Unfortunately, my drinking companion was not impressed, he didn't think pineapples belonged in quality bars. It got me thinking - how did this fruit, once considered a symbol of status and hospitality, spread around the world from its native Brazil to Europe and beyond in the 1600s, become so neglected by bartenders in the late 20th century?

A few months later, the subject of pineapples came up again in conversation with Jake, the man behind the infamous pineapple-inspired Penis Enlarger cocktail (it includes a derivation of Viagra). As the drinks flowed, we made a pact - let's bring the pineapple back, in fact let's take it to Tales of the Cocktail. The next day the words of Ernest Hemingway were ringing round my head - "Always do sober what you said you'd do when drunk" - and our mission to promote the pineapple was underway.

So why have pineapples fallen out of favour? I think the current generation of bartenders only know one drink that called for pineapple, the Piña Colada, and the people who taught them had been told not to go near them, their having gained a poor reputation based on poor quality ingredients.

Yet there are plenty of classic drinks that call for pineapple, such as the Harry Craddock creation the Holland House, the rum-based Mary Pickford or Missionary's Downfall and the Prince of Wales (my twist is below). You can find pineapple recipes in David Embury and Harry Johnson too. I honestly think pineapple pairs well with any number of spirits, not just whisky - though you won't be surprised to learn I think it goes well with the subtle vanilla characteristic of Monkey Shoulder. (By the way, during the presentation, we served Artesian's recipe for the Piña Colada using Bacardi, Koko Kanu, coconut water, pineapple puree and fresh lime, blended in a slushy machine.)

A remaining problem, however, is that we've grown so used to tinned pineapple that we don't know how to use it or pick a ripe pineapple. First, you should understand that not all pineapples are the same.

Smooth Cayenne - A large, pale yellow flesh, cylindrical pineapple with golden tan or reddish-orange and a high sugar and acid content. Originally Hawaiian this is the one you'll most likely see in a grocery store near you. Now also grown in Central America, which look green.

Hilo - A smaller, sweeter, Hawaiian variant of the Smooth Cayenne.

Champaka - Another subvariety of the Smooth Cayenne.

Queen Victoria - A small yet particularly sweet fruit with an exceptional aroma, small size and bright colour have seen this variety described as the best in the world. Grown in Africa, Mauritius, South Africa and Reunion Island.

Pernambuco (Eleuthera) - A small pineapple with the palest of flesh and spiny leaves.

Del Monte Gold - A recent variety with sweet, deep-yellow flesh and a subtle coconut flavour, the man from Del Monte, he say yes.

How to tell if a pineapple is ripe

Next, how to pick a ripe one? First, feel it up: is it heavy? Good. This means it's ripe and full of juice. Now squeeze it, there should be some give but not too much. Smell it: go for a fresh sweet aroma without that 'fermented' smell. You want bright green leaves, a fresh looking skin and a full body. Avoid wrinkled skin, tired dry leaves or black holes. Finally pluck a leaf - is it faded in colour or still verdant and succulent?

Judging by the response from delegates at Tales, I think Jake and I hit a nerve. One craft brewer told me she'd been inspired to make a pineapple wine, mimicking the earliest trials of the native tribes in Brazil who would mash up pineapples and return a few days later to drink the fermented juice. Don't be surprised if I roll into your bar asking for a Monkey Shoulder and pineapple-inspired creation.