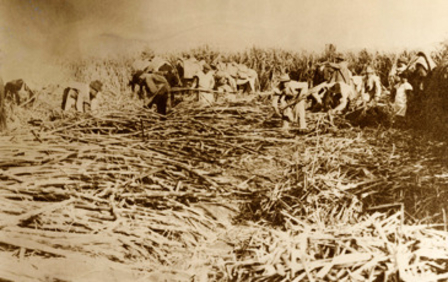 Sherry, sangria and a large G&T: Spain's drinking culture is rightly renowned for these three iconic serves, but less well-known is its historic - and newly resurgent - role in rum. A sneak preview into Ian Burrell's Rum Experience University, to be held near Motril along the south coast, sheds light on this often hidden heritage and its essential companion, sugarcane.

Despite being known today as a plant of the Caribbean, sugarcane originated in New Guinea where its cultivation has been dated back to 6000BC. In fact, the Caribbean was one of the last places the plant spread to, having first followed human migration routes to south east Asia and India and east into the Pacific around 1000BC.

From India and China it made its way to Mediterranean and to Spain via Granada, where the Moors brought sugar from Egypt. Once Granada was won back by the Spanish in the late 1400s they started to ship it around the world, eventually docking from the port of Motril towards the Caribbean. Meanwhile, the Portuguese had introduced sugarcane into Madeira, from where it soon reached the Canary Islands, the Azores, and West Africa. Finally in 1493 Columbus transported sugarcane from the Canary Islands to what is now the Dominican Republic.

Rum and sugarcane have played a big part of Spain's, and in particular, Motril's history, with the tall grass of the crops dominating the landscape and towering chimneys and column stills still littering the skyline.

Spain arguably plays a crucial role in the story of rum, with claims that distillation of sugar cane juice occurred some 600 years ago, predating distillation in the Caribbean, though the first official record of serious rum production dates to 1828 when a Motrilian rum won first prize at the Spanish Industry Exhibition in Madrid. Before the 15th century, sugarcane had been used to chew or pressed for the sweet juices but, having won back Granada, the Spanish began to crudely distil a sweet spirit made from this juice. This beverage was known as aguardiente de caña up until 1840, when the term ron began to be used, derived from the English word rum.

Motril, a short drive away from the hotel where the Rum Experience University will be held, still offers plenty of evidence to this past. Old foundations of a sugar plant are visible in the local museum. Large stones show where the cane would have been squeezed for its juice, occasionally dragging the arm of a poor worker through as well. In fact knives were always on hand for quick amputations in the event of such an emergency. Close by, workers would boil the juices in shallow basins and finally dry out the sugar in earthenware pots, which can still be found around the site today.

In the period from the 16th to the 18th century there were as many as six sugar houses in Motril. A sugar crisis hit the area in the 1700s but once this was overcome nine new sugar factories popped up. Gradually however, production began to fade, the market fell out and nowadays the fields of sugarcane are gone, replaced instead with crops of avocado or olives - and latterly holiday villas - while the majority of chimneys are in disrepair.

But while the sugarcane may be gone, the rum isn't. It was around the time of the Industry Exhibition that the Montero family established a sugar factory and started to distil cane juice. Born in 1929, Francisco Montero, or 'Uncle Paco' as he became known, spent much of his childhood around the family distillery, Azucarera Montero. In 1963 he founded the house of Ron Montero and set about creating a unique rum blend.

It is this rum distillery that the Rum Experience University will be centred around. The factory and aging house is found at the foothills of Sierra Nevada and is itself evidence of the growing importance of rum in Spain, receiving 20,000 visitors a year. Inside, there are 362 virgin American oak barrels resulting in an annual output of 240,000 litres per year.

Today, a sleek-looking, modern distillery contrasts with the original factory, where the family offices are still based. The old malting hall, now open to the elements, is no longer the hub of noise and activity it once was, something Andrea Martin Targa, Director of Montero Rum, remembers well. She grew up when her parents ran the company and can remember when the rusting debris, huge machinery gathering cobwebs and decaying concrete tanks were in action. Even the old furnaces with their blackened bricks speak of another time.

Inside the modern-day offices thousands of small bottles hold samples of different molasses - it's fascinating how different the product tastes depending on its origin - and rums, whilst the walls show black and white photographs of local sugarcane harvesting. Walking through the now silent machines Andrea talks of the modern era for Montero with a passion - for her, being involved with Ian Burrell's Rum Experience University is the start of a new era.

Montero Rum isn't the only rum that's produced in Spain, making the wider lack of knowledge about Spanish rum even more shocking. Ask the average Spaniard about rums made in their country and more often than not they will reply there aren't any.

In fact, to the east of Motril, in Jerez, Dos Maderas rum is aged, having been produced in Guyana and Barbados then shipped to Spain to attain its unique flavours in the company's ex-sherry casks. Then there is Negrita, produced by Bardinet, which buys some alcohol from Montero and brings the rest from Morocco, all to be aged in Catalonia. Perhaps more commonly known, but still Spanish, are the Canary Island rums, typically with a honeyed flavour as compared to the characteristically light rum from Motril.

"Motril was the sugar capital of Europe in 10th century," says Ian Burrell. "As you can't get rum without sugar, and considering the wealth of history here that formed a foundation for rum as we know it today, it makes perfect sense to have the Rum Experience University in Motril."