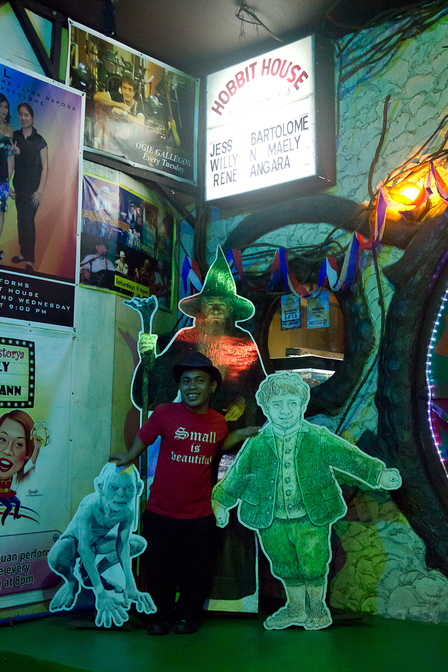 When it comes to crazy, Manila makes Bangkok look like a rest cure. The space cruisers of the rich slide past pedicab drivers bathing their children on street corners; tin rooved shacks nestle next to luxury malls; the stink of sewage wafts up towards slickly-marketed condos; bar girls and ladyboys tout for sex; and hustlers flog Viagra in the streets.

And so, naturally, the Philippine capital is home to Lonely Planet's pick for the world's most bizarre bar: Hobbit House. As the name might suggest, it's a Hobbit-themed bar staffed by... well, little people.

Ali, sunny and smiling in a trilby hat over a scarlet "Small is Beautiful" T-shirt, swings open the circular door of the Hobbit House - hobbit-hole? Smial? He collects a silver bell from the lid of a piano that towers over him, and rings it to announce our arrival.

The bar is long and dark, fronted by a stage, and decked out in Hobbit art and memorabilia. Maria, who is tall enough to see over the tables but needs to stand on a step and stretch to collect drinks from the bar, escorts us to our table and produces a menu. An impressive selection of 200-odd imported beers sits side by side with the Flaming Frodo, a shot of blazing lambanog (coconut spirit) with a beer chaser.

On stage, the live act without which no evening in the Philippines would be complete break into Leonard Cohen's Suzanne, beneath an enormous painting of the inn scene from Lord of the Rings. A very pretty little person jokes with the standard-size bar staff. And Maria takes a break below a painting of The Hobbit; walking can be difficult and painful for people with achondroplasia.

It's a quiet Monday night and I feel quite phenomenally awkward. I'm wearing heels, so several of the servers don't even reach my waist. And the whole thing feels, at first blush, exploitative. Wrong. Degrading...

Jim Turner, now 75, started Hobbit House in 1973 after arriving in the Philippines as a Peace Corps Volunteer in the 60s and never getting around to leaving. He's outside, with a friend, working his way through what looks like a bottomless whisky and soda. "This is your bar?" I ask.

Pidoy Fetaleno, 61, is a jovial chap wearing smart shorts, socks, brogues and the regulation Hobbit House T-shirt. He beckons me inside with a wave of the arm. To my absolute horror, I catch myself stooping to hold his hand as I would a small child's - an indignity he ignores with practiced grace.

"I started working here when it opened in 1973 and worked my way up," he explains. "First I was a waiter, then cashier, then the head waiter, then the general manager - then I retired, and now I'm back as a consultant, an owner and a director."

How has Hobbit House been for him? He looks at me. "When I was young," he explains, as though talking to a very slow child. "With my disability it was never expected that I would have any opportunity to work. Now I have a wife, and two children, both of them through college: one's in Saudi Arabia, one in Canada."

Even today, despite legislation, employment practices in the Philippines rise to heights of ageism and sexism that can only be partially explained by a culture so looks-obsessed that the results of beauty contests make front page news. Photos are typically requested, and requirements that candidates be above the average height for the Philippines, such as "mimimum height 5'3" for women, 5'7" for men", are common.

In the 1970s, when there was no legal protection of disability rights, the situation was far worse. "I came to Manila to visit my brother," Pidoy recalls. "And I heard that there was this man building a place for the little people, so I came here."

That was over 40 years ago, and Pidoy has never looked back. The Hobbit House has changed his life beyond recognition, providing him not only with a job and income, but enabling him to build a career and a family.

Not all of the staff at the Hobbit House are of short stature: it's just not practical. "We can't work in the kitchen," Pidoy says. "Reaching the rice cooker's too difficult for us, and the same with behind the bar."

Maria heads over to our table. "She's been working here since 1991," Pidoy explains. "She has one son and two grandchildren."

Maria is 42, looks 35 at the outside. How has the Hobbit House helped her?

And, yes, in the Philippines, it really is that simple. "We have another branch in Boracay," Pidoy adds, referring to the white sand island that's one of the Philippines' top beach destinations. "We've got eleven midgets working there now."

Outside, Jim is still working on his whisky and soda. Why did you set up the place, I ask?

"I came as a Peace Corps volunteer," he says. "I wanted to help all types of people, and these people had no jobs. I wanted to find jobs for these little guys - and now, 40 years on, we're into the second and third generation."

A rose-seller locomotes past the Hobbit House Reserved Parking sign with an odd, uncomfortable gallumphing motion, and up to Jim's table. "You see him," says Jim, meditatively. "He has a different problem. One leg shorter than the other, you see?"

There's almost a foot's difference between the rose-seller's left leg and his right. Rapid negotiations in Tagalog, and Jim buys his entire stock at a price sufficient to ensure a profit but low enough that the Hobbit House doesn't become an alternative to work. The rose-seller lurches away, beaming.

"Are you happy with what you've done here?" I ask Jim.

"Of course I'm happy," he rasps. "All my employees are happy, I'm happy. These people are my family now. Look at Ali. He's got five children! Pidoy has grandchildren!"

Back inside, I sit under a replica of Aragorn's sword and watch the life of the bar for a little while. Pidoy greets his regulars, plays genial host to a table of diners; Ali puts boundless enthusiasm into his role as front of house; the pretty, happy chick flirts with the bar staff; Maria poses for pictures with a Filipino family; and friends swing by to visit.

And, in the end, Hobbit House doesn't feel bizarre at all. It's a family affair. A social enterprise with a difference. And, if you're ever in Manila or Boracay, I'd recommend you stop by for one of those imported beers. 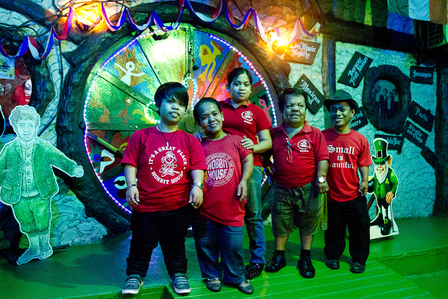 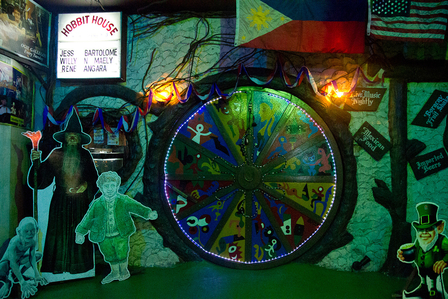 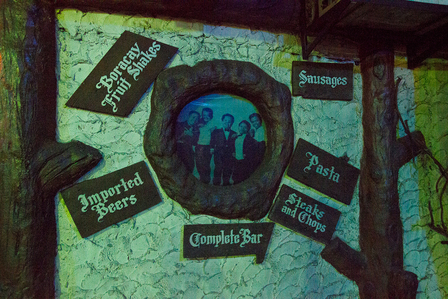 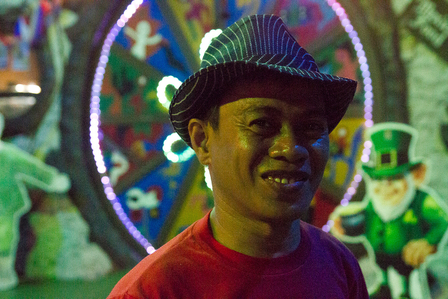 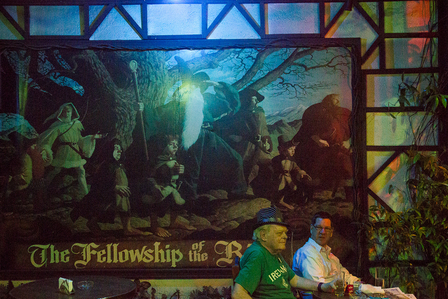 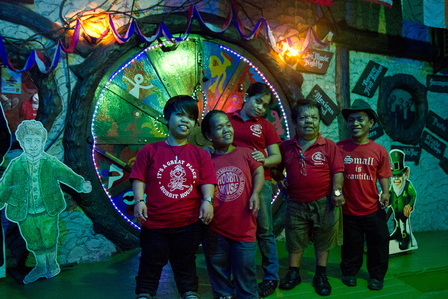 ... comment(s) for The Most Bizarre Bar? Hobbit House, Manila.