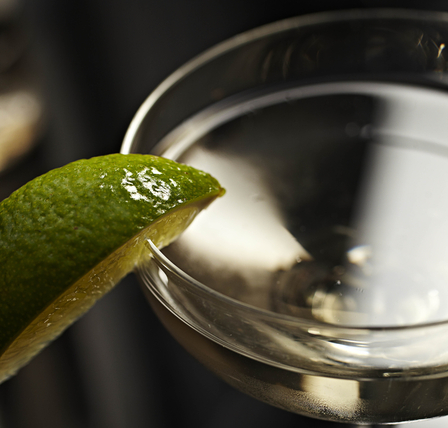 A cocktail may be defined as a drink with two or more ingredients but decent recipes that call for any fewer than three ingredients are hard to come by. Here we present our five favourite two-ingredient cocktails. Forget the Buck's Fizz, G & T or a whiskey and soda, these drinks are much more than a simple spirit and mixer combination.

Stir the ingredients with ice and strain into chilled glass.

As an answer for scurvy in the 1860s the Merchant Shipping Act made it mandatory for all British ships to carry rations of lime juice for the crew. When Lauchlin Rose launched his sweetened preserved lime juice mixture, the navy stocked up on the cordial. Once mixed on board the ships with gin the Gimlet was born. A classic drink that can be both complex and impossible simple to make.

Pour ingredients into ice-filled glass and gently stir. Adding half of a shot of lime juice makes this drink even tastier.

Paloma is Spanish for dove and this well-known cocktail in Mexico was created by the legendary Don Javier Delgado Corona, owner/bartender of La Capilla (The Chapel) in Tequila, Mexico. Still mixing, even in his eighties, Don Javier is noted for stirring his drinks with a huge knife.

Stir the ingredients with ice and strain into chilled glass.

This iconic drink is thought to have been created circa 1949 by Gustav Tops, a hotel bartender in Brussels. Set against the start of the Cold War, the drink is said to have been inspired by Perle Skirvin Mesta, the U.S. ambassador to Luxembourg (1949-1953) and rich American socialite who the term 'hostess with the mostess' was coined for due to her lavish parties.

Pour the cassis into glass and top with the chilled wine.

A Kir Aperitif is traditionally made 1/3 cassis to 2/3 wine but that's normally too sweet for most modern palates. The origins of Kir are said to date back to 1904 when a waiter named Faivre first had the idea of mixing white wine with crème de cassis at the Café George in Dijon, France.

Faivre's new drink became known as the 'Cassis Blanc', now better known as 'Kir' due to a colourful politician and WWII resistance hero by the name of Canon Félix Kir, who served as the Mayor of Dijon.

Stir all ingredients with ice and strain into chilled glass.

Readers of Embury will know he had a bone dry palate and Martini's made to his specification are just that, and with the correct dilution, fabulous.

In his 'Fine Art of Mixing Drinks', David Embury writes of this drink "After extensive experimentation I have arrived at the ratio of 5 to 1 as the proportion most pleasing to the average palate. Personally, I like a ratio of about 7 to 1 even better, and I know some who prefer a ratio as high as 10 to 1."