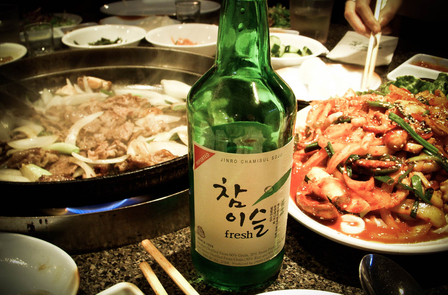 It’s the Asia-Pacific region, an area of the world you may not associate with chronic alcohol consumption, that takes the title of the most booze-soaked expanse in the world. Eight of the top 10 best-selling spirit brands are local super-giants.

Taking the lead is the now-famous Jinro soju. It's simply staggering how much this product sells in its home land of South Korea. In 2013 65,660,000 nine litre cases. This year Emperador brandy, native to the Philippines, became the second-largest spirits brand in the world, all according to the IWSR (International Wine & Spirit Research). However, even being the second largest brand, it's still less than half the size of Jinro.

The dubious honour of the most alcohol-soaked nation on earth, despite what the press tell us about binge-drinking broken Britain, in fact goes to South Korea. According to a World Health Organisation study, South Koreans drink more hard spirits than anywhere else per head of population. And not only are they the biggest drinkers but the country is also home to the top-selling alcohol brand in the world: Jinro soju.

So why is consumption so high? Partly it could be because of the stress of existing next to its bellicose neighbour to the north, with whom it remains officially at war, but it could also be because it's dirt cheap. The average bottle of soju costs between 1,000 to 3,000 South Korean Won, or between 58p and £1.75. This goes some way to explaining the 3 billion bottles consumed there last year - made up of Jinro and other brands - for a country with a population of 49 million. That's more than 60 bottles per year per head of population.

Soju is clear-coloured and traditionally made from rice, but a lot of producers nowadays use supplements or prefer to replace rice with other starches, such as potatoes, wheat, barley, sweet potatoes or tapioca. The spirit ranges between 10 to 25% abv, which might explain why the entire country isn't permanently drunk, and has a history dating back to at least the year 1300.

Although usually consumed neat, mixing soju with beer has become popular, known as a bomb shot, while those with a sweeter palate blend soju into fruit smoothies. A popular form of cocktail mixes equal measures of soju, lime juice and sour mix (citrus juice with sugar syrup normally premixed) in a Collins glass over ice, garnished with a cucumber.

However, perhaps the tide is turning on Jinro's domination of the world's spirits. When International Wine and Spirit Research compared the volume of Jinro soju sold in 2007, 2010 and 2011 the rice liqueur's sales were steadily dropping, down from 72 million cases. At the same time all other brands on the list were increasing. That said, it would have to lose half its sales to lose the crown of best-selling global spirit.

Intrigued to taste the most popular spirit on the planet? Exported, it only costs £4.49 from Waitrose, imported by Amathus Drinks.

Unless you've been to the Philippines, you've most likely never tried San Miguel gin, Tanduay rum or Emperador brandy. 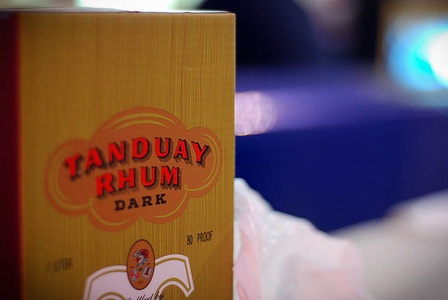 Yet these are some of the biggest-selling spirits in the world. Tanduay may well overtake Bacardi to become the world's number one rum; Emperador is Earth's favourite brandy, and recently announced second-best-selling global spirit, and Ginebra San Miguel, although declining, is the planet's best-selling gin.

A cluster of more than 7,000 islands, the Philippines is home to around 100 million people, making it the twelfth most populous nation in the world. And most of the country is overwhelmingly Christian - so there's little religious prohibition on booze.

Filipinos, in fact, consume more alcohol than anyone apart from South Koreans and Russians. (Which is why the world's single biggest-selling spirits brand is Jinro soju.) And, unlike Indians - yes, the world's biggest-selling whisky is the splendidly colonial-sounding Officer's Choice - they aren't fussed about whisky.

Furthermore, spirits are everywhere. Even a humble sari-sari store, just a little bamboo and rattan shack on a sand street, will often stock bottles of Tanduay and/or Emperador alongside sachets of shampoo and 3-in-1 coffee; an urban 7-Eleven will offer "gin" in an overwhelming array of colours and hues, from Brown Coffee, apple, lychee and Mojito(!) to the ominously-titled G.S.M. blue.

Marketing would have the UK's Portman Group or the USA's DISCUS waving feebly for the smelling salts. Fighter Wine is massive on the island of Cebu; Colt 45 is a popular high-alcohol beer; Red Horse, Colt's main competitor, advertises itself with "Horse Power".

And, even for a low-income country like the Philippines, spirits are cheap. A bottle of standard-issue Tanduay rum, a caramel confection that's plausible when drowned in Coke, costs not much more than two 330ml cans of San Miguel beer - around 80p for 750ml.

Things are starting to change - a law passed in 2012 is gradually increasing tax on cigarettes and booze, with 80% of sin tax revenue earmarked for healthcare (most of the rest goes to the archipelago's tobacco farmers).

But, in the meantime, if your idea of a holiday includes heavy drinking on a tropical beach for pennies, the Philippines is, likely, for you.

10. Hong Tong an aged liquor made from molasses, often incorrectly referred to as a whisky, owned by Thai Beverage, which sold 18,500,000 nine litre cases in 2013.

... comment(s) for The World’s Best-Selling Spirits