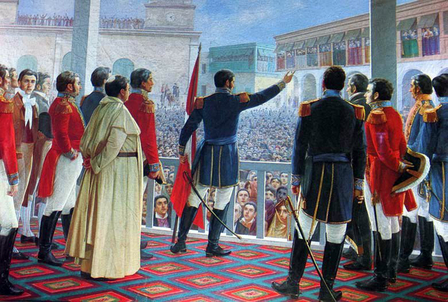 Pisco Sour Day might be in February but Peruvian Independence Day, on July 28, is a good opportunity to further acquaint ourselves with Peru’s unique style of pisco.

The South American country begins its national day with a 21 cannon salute in Lima, and then everyone heads to Mass. But it's after the trip to church that the parties, known as Fiestas Patrias begin, and for a nation that claims the origins of pisco, you can be sure there will be generous pouring all day long.

Guillermo Toro-Lira, a Peruvian pisco historian, remembers growing up in Peru and arguing with his grandmother, who was Chilean, over where pisco was from. "It is pretty important to Peruvians, it has been in their history forever and the Peruvians are very proud people."

Pisco is an incredibly aromatic brandy with those made from Italia grapes, such as Barsol Mosto Verde Italia, being wonderfully floral and this spirit's attractive flavours are harnessed in the following cocktails.

Origin: Said to have been created in the early 1920s at Bar Morris located, 847 Calle Boza, Jiron de la Union, Lima, Peru. However, like the origins of so many classic cocktails, this is disputed. Read the full Pisco Sour story and check out the
traditional blended Pisco Sour recipe and our
shaken Pisco Sour recipe

One of my very favourite of all cocktails due to both to its flavour and the story behind its previously secret recipe and the Bank Exchange in San Francisco where it was first made and became legendary. Our Pisco Punch page says as much about the Bank Exchange as it does about the recipes and various men behind those recipes - yes there's more than one, and the true secret behind this brilliant drink may yet be told.
I've taken the best of the various recipes I've come across to produce Difford's Pisco Punch recipe

This cocktail first appeared in the 1903 How to Mix Drinks book and we have drinks historian David Wondrich to thank for bringing both the Pisco Bell Ringer recipe and the story of Jim Malony, its creator, to our attention.

Peruvian Independence Day falls in the middle of summer (well at least it does here in the Northern hemisphere) so it's guaranteed to be hot so what better than a refreshing fruit cup - think gin based Pimm's Cup but much better with wonderfully aromatic pisco. If I do say so myself, our Pisco Fruit Cup recipe is rather good.

• More of our favourite pisco cocktails

• Our guide to Peruvian pisco

• Read about the Pisco Wars between Chile and Peru.